Bandy ‘Overjoyed and grateful’ for chance to play pro football

Bandy ‘Overjoyed and grateful’ for chance to play pro football

TORONTO — Logan Bandy grew up in Calgary and was a self-admitted “Hockey kid” growing up.

“I was a power forward, surprisingly” Bandy joked. “Being a kid that was a foot taller than everybody else on the ice, I took a couple of hitting penalties and was never the fastest skater. But I got into the dirty areas and was definitely a power type.”

One of his friends signed up for a Calgary Stampeders kids camp, and he decided to join him and give it a try, and the rest, as they say, is history.

Fast forward to the present and the offensive tackle is primed to be one of the top options at his position in the 2021 CFL Draft. 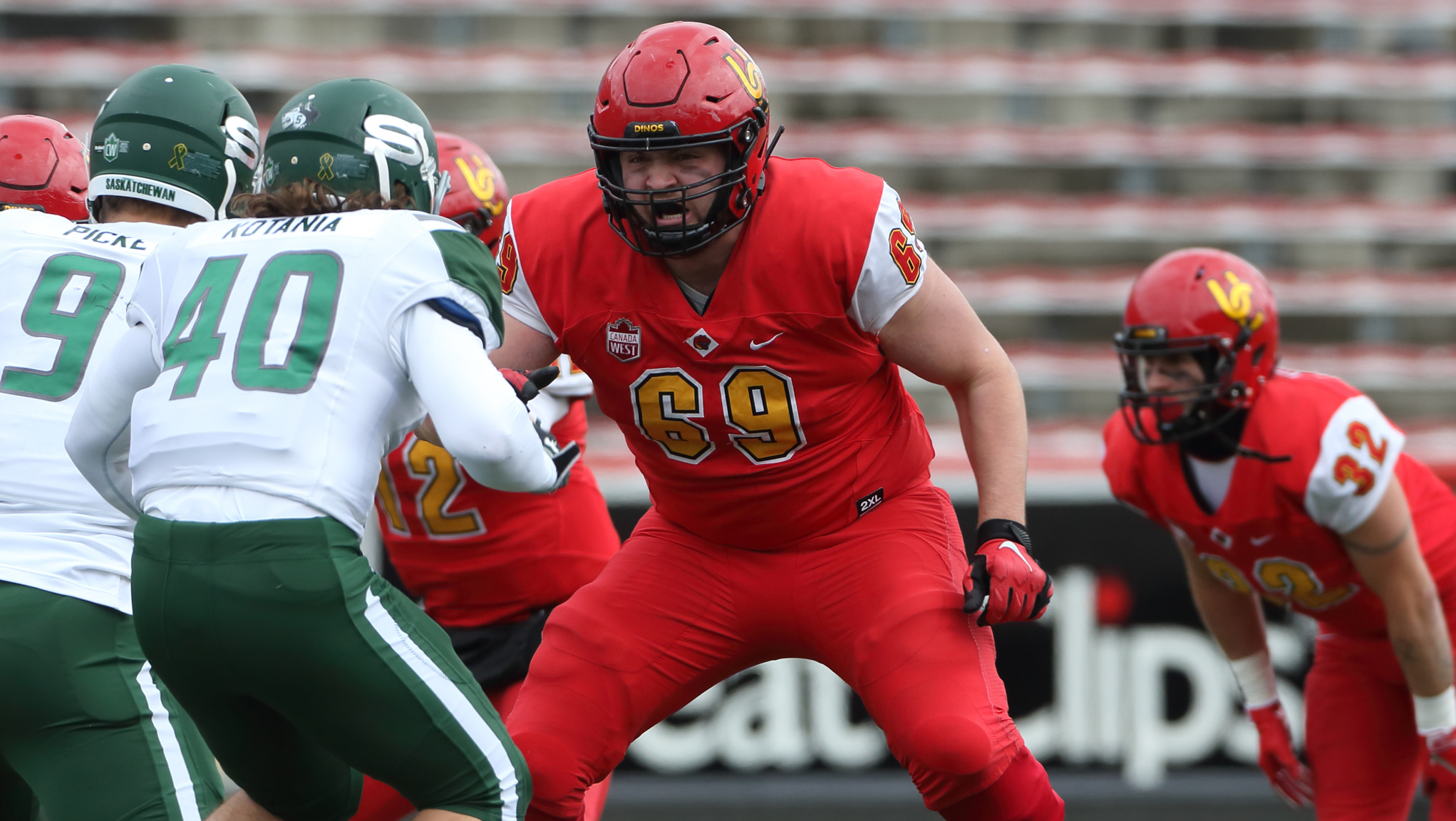 Calgary’s Logan Bandy is one of the top offensive linemen available in the 2021 CFL Draft. (University of Calgary Athletics)

Following that camp, Bandy’s parents got him season tickets for the Stamps, and he spent a large portion of his summers at McMahon Stadium.

When he signed up for football, his size played a part in his position. He spent the majority of his time as an offensive lineman while also playing some defensive line.

He was highly recruited coming out of high school, but at the end of the day, the University of Calgary offered him the best fit.

“The program for Kinesiology is the best in North America and I get to play in front of my family every game. So it’s hard to pass that up,” Bandy said.

In his first year with the Dinos, he was the sixth man on the offensive line, so he lined up as a tight end and even a wideout in certain sets, but from his second year onwards, he was utilized as the team’s starting left tackle, protecting the blindside.

In his two years as a starter, Bandy was a rock for the team, securing Canada West All-Star honours in both 2018 and 2019, respectively, while also being named a U SPORTS Second-Team All-Canadian in 2019.

Bandy was able to help the program break its Vanier Cup drought against Montreal two years ago.

Offensive line is always a position that teams are looking to address through the draft — especially with the ratio in play. This draft in particular will see a number of talented blockers from both U SPORTS and the NCAA go early on.

As the 18th-ranked prospect and fifth-best offensive lineman on the latest CFL Scouting Bureau Rankings, Bandy will have a chance to hear his name called in the first round, and there’s even a chance that he could be scooped up by the Stampeders.

But spending all that time at McMahon cheering for the Stamps, he could also find himself on the other side of their various rivalries.

“My dad is a little torn on some of those other teams, but I keep telling him that no matter where I go, he’s got to buy a jersey,” Bandy said.

Bandy described himself as an athletic player who can stay home in his pass protections while also being willing to mix it up and get into those dirty areas — he’s brought that aspect along from his hockey days.

With the draft on the horizon, the realization has started to set for Bandy that he could become a professional football player in just a few day’s time.

“I don’t even know if I can describe it yet,” Bandy said. “I just think about sitting in the stands, way up in the bleachers at McMahon, watching these guys play and thinking maybe that could be me one day. So no matter where I go, I really don’t know how to describe it other than I’m going to be overjoyed and grateful for the opportunity.”