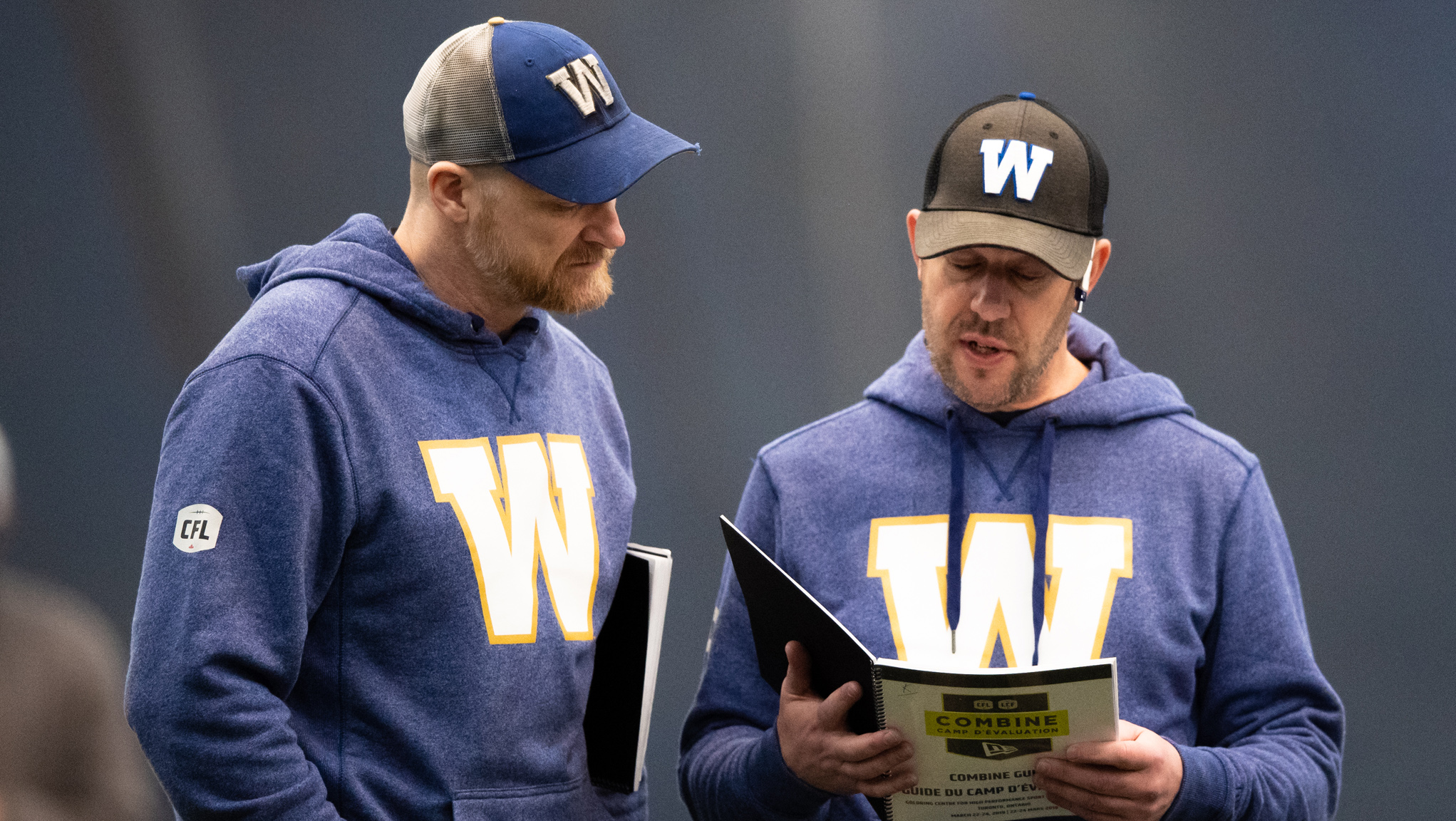 Canadian Football League general managers will head into next week’s draft without even knowing what they got out of last year’s draft.

In 2021, when training camps begin, there will be two years of draft prospects heading in to prove the deserve a shot.

Where does that leave teams coming into the Canadian draft in terms of needs and draft day wishes? Well, they won’t have a clear picture on what exactly they have when they haven’t even been able to assess their top picks from last year.

Yes, the guessing game that is draft day has another twist for those trying to build their Canadian depth, which is essential in a road to the Grey Cup.

Here’s my best guess as to one glaring need for each team heading into draft day.

Last season, the Lions went with linebacker Jordan Williams with the first overall pick. With Adam Konar and Bo Lokombo in the mix in BC, it appears as they have two starting spots pegged for Canadian linebackers with Williams as well as 2018 draft pick Isaiah Guzylak-Messam.

The Lions also looked locked in at starting two Canadian receivers with Shaq Johnson and Lemar Durant coming into 2021.

However, I believe there is a glaring need for the BC Lions in the trenches. Outside of Hunter Steward, the other Canadian offensive linemen for the Lions didn’t play a heck of a lot due to injury or inexperience in 2019. The Lions only added one offensive lineman in the 2020 draft with a fifth round selection in Matt Guevremont.

Offensive line would be my best guess as to what the Lions might covet with their fourth overall selection. Especially with the trouble they had in protecting Mike Reilly in 2019.

Oh, and is it too easy to predict them trying to bring the brothers Lokombo together with a second or third round pick for defensive back Nelson Lokombo out of the University of Saskatchewan? You can never go wrong drafting local talent.

John Hufnagel can take the best player available at any of those positions with the eight overall selection.

And I’m not saying it’s desperation at those positions for the Stampeders, but those are the places you start to see the Stampeders getting a little thin when it comes to depth. Calgary has taken a bunch of hits to their depth of Canadian offensive linemen over the years with retirements and departures (Pierre Lavertu, Shane Bergman, Brad Erdos, Brett Jones) and now have one of the youngest groups in the league with Sean McEwen being the most veteran player at the age of 27. My guess is that’s what they’d like to grab early but by the eighth pick, there’s no bet the player you really want is going to be there.

Plus, there are a few areas Hufnagel would like to address next week and he’ll always take the best player available and figure the lineup out later. And remember with the snake draft this year, Calgary picks 8th and then again at 11 so Hufnagel will get two high-caliber athletes to bring into the fold.

You can say offensive line for almost every team. But when I see Derek Dennis, SirVincent Rogers, Colin Kelly, Randy Richards, Tommie Draheim and Eric Lofton all on the roster, I believe we’ll see three American offensive linemen starting for Edmonton, leaving only two spots for Canadians. Edmonton has the depth for that.

This means they’ll have to spread out the National talent with receivers, defensive lineman and defensive backs. I’ve got Edmonton going defence with their first pick as there aren’t that many highly ranked receivers coming into this years draft.

Not that Edmonton is drafting fifth overall with any sense of urgent need, they have to bolster their depth on the defensive line if they need Kwaku Boateng and Mathieu Betts to produce. That’s why we saw Alain Pai drafted in the second round for Edmonton last year. I’d expect either defensive line or defensive back this year as well.

The Saskatchewan Roughriders pick second overall and last time they had that pick, they drafted linebacker Cameron Judge.

This off-season they lost Judge to the Toronto Argonauts and hit the free agent pool to try and replace him with the Herdman-Reed brothers.

But if you’re looking for a glaring hole to be filled with the second overall pick for the Riders, I must admit there aren’t a lot of holes. Do I think the Herdman-Reed brothers are going to be able to be the incredible playmaker Cam Judge turned into? No, but they do take the sting away a bit.

General manager Jeremy O’Day honestly can approach this draft like John Hufnagel and go with best player available and be quite comfortable with where they are.

Defensive tackle could use some depth with Makana Henry and Charbel Dabire as the one-two national punch in the middle of the defensive line. With Henry now in his mid 30s, O’Day could have some decent options to land an impact lineman early.

If there were higher ranked linebackers coming in, I’d think O’Day might make a move there but he might pick up a steal in the second round.

Winnipeg, we have a problem.

25 Canadians are on the roster right now.

In a league where you have to dress 21 Canadians that is not a good place to be heading into the draft. You usually see well over 30 by this time in the off-season.

Needs? Defensive line, linebackers, defensive backs, receivers. Unlike Calgary and Saskatchewan, who can pick best player available because they aren’t panicked, Kyle Walters needs to get a winner with the third overall pick because they might have to start or contribute in year one.

With Andrew Harris being the star running back he is, you can’t believe how much of a ratio buster that is for the Bombers. It eases the pressure some what for Kyle Walters but if I were to put money down on the third overall pick and looking at the prospect list for the 2021 draft, I’m going defensive back in the first round for Winnipeg with only Noah and Nick Hallett on the roster.

Noah just so happened to be their first pick of the 2020 draft, albeit 18th overall, after trading their first round pick to Toronto in the Zach Collaros deal.

Unlike their opponent in the Grey Cup, the Hamilton Tiger-Cats are in a much, much, much better spot when it comes to their Canadian talent. And with the first overall pick in the draft, Hamilton’s status looks even better.

However, they are not without needs.

I’d say receiver and defensive line/linebacker are first and foremost, if the Tiger-Cats are drafting for need, but they may have to take care of that later in the draft.

You don’t have to tell Hamilton that twice with Mark Chapman selected first in 2018 and never agreeing to a contract.

There are plenty of high-ranked defensive players that could come off the board early and colleague Marshall Ferguson is also thinking defensive for the Tiger-Cats with DE Daniel Joseph tabbed as the No. 1 pick.

Of course the Toronto Argonauts are hoping they have something special in receiver Dejon Brissett from last year’s draft and after picking Juwan Brescacin away from the Calgary Stampeders, but this goes back to my original premise of not actually knowing what you have from 2020 and trying to balance your needs.

The Argos helped themselves out big time with the ratio by picking up two outstanding linebackers in Henoc Muamba and Cameron Judge. So along with at least three Canadian starters along the offensive line, they only need two starters out of receivers, defensive line and defensive back. They have Brescacin, Llevi Noel, Arjen Colquhoun and Robert Woodson as options.

But I’m not sold they’ll be entirely happy with the depth across those positions without being able to see if Brissett is what they hope he is.

They pick seventh and 12th, which is a great spot to hope to see some talent fall into your lap but outside of receiver and defensive back. I’m pondering if this is another team hoping to see a talented defensive lineman drop back after losing Cleyon Laing to free agency.

As always Marcel Desjardins is loaded up with Canadian talent. He is committed to starting with quarterback and Canadians and then filling out the rest of his roster.

In the 2020 draft, Desjardins went hard after defensive players with linebacker Adam Auclair in the first round and all but two of his picks being on the defensive side of the ball.

The pick up in free agency of Anthony Coombs in the receiving corps and Cleyon Laing on the defensive line put Desjardins in an excellent position with the sixth overall pick.

They’re another team who can definitely go with best player available and not sweat the needs, but if I’m looking at the REDBLACKS today, I’m seeing them miss out on bringing back Evan Johnson along the offensive line and thinking it’s a spot where Desjardins might want to address early to solidify some depth.

But beyond that, looking to the future with Brad Sinopoli reaching his mid-30s, a Canadian pass catcher could be in order for Ottawa as well.

The Montreal Alouettes didn’t have a first round pick in 2020 and don’t again in 2021 all thanks to the Johnny Manziel trade.

However, they do pick first in the second round but with the snake draft where they’ll select 10th and then not again until pick 27.

They really do need to make that 10th overall pick count on a roster that I’d classify as mediocre when it comes to impact Canadians.

Montreal has ‘depth’ so to speak with their national talent but not top calibre players who you’d consider threats to be nominated for top Canadian at the end of the year. It hurts more when you lose two of your top Canadians in Bo Lokombo and Henoc Muamba.

Danny Maciocia has his work cut out for him again. And with that rousing endorsement on the depth of quality Canucks, I could see Maciocia picking any position (except quarterback). He needs difference makers with Canadian passports so I’m looking at ratio breaking potential spots at defensive back, receiver or linebacker from the Montreal Alouettes at 10th overall.