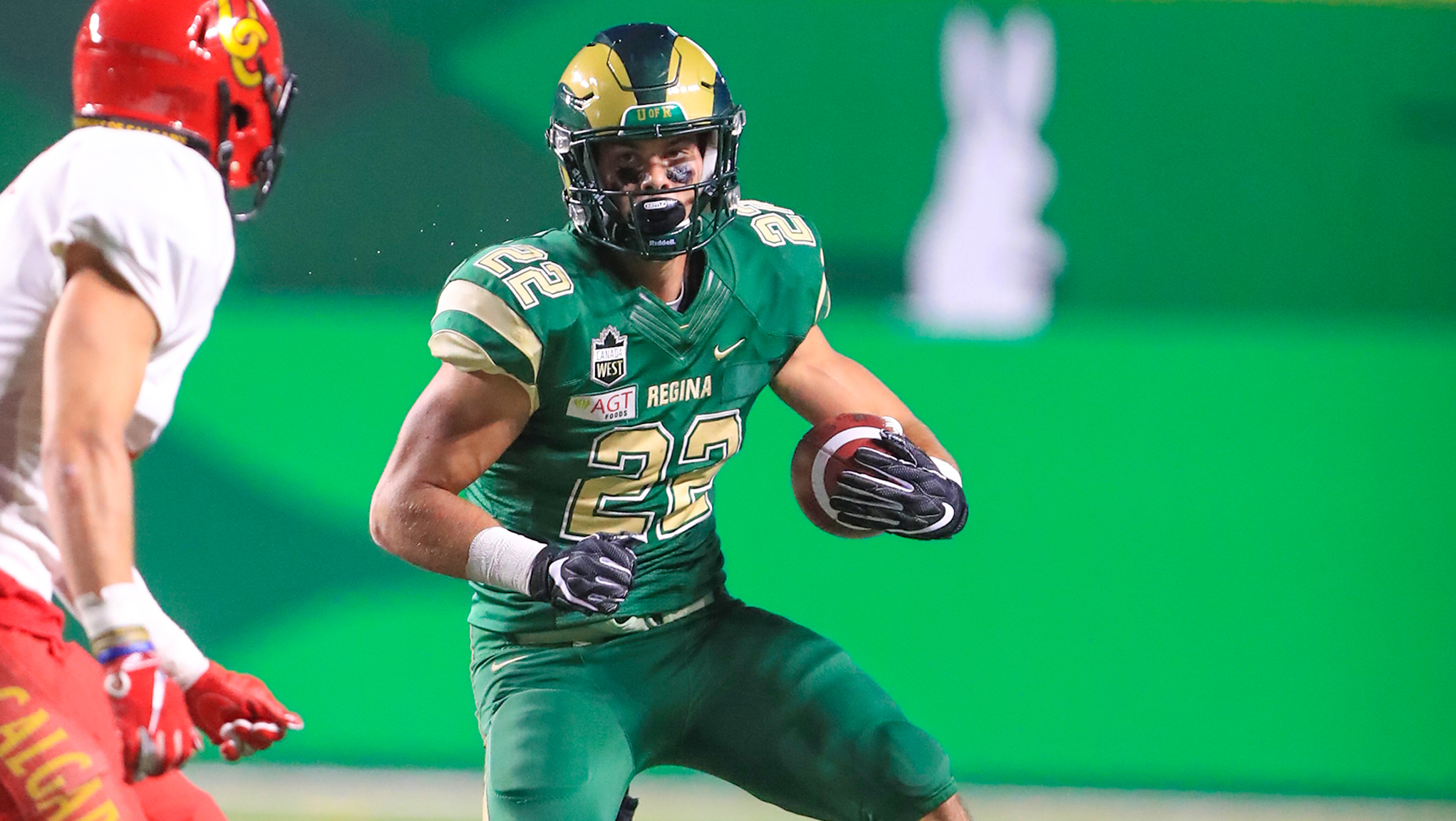 Another year of combine testing for the CFL Draft is in the books and while these numbers might seem frivolous to some and meaningless to others, I always enjoy the context they add to the draft season discussion.

One of my favourite exercises is taking performances from players available in the 2021 draft and finding out which combine competitor of CFL years past compares *closely*.

Does this mean the two compared players will get picked in the same place or have remotely similar careers? No, but it does give you a sense athletically for the type of player your team is getting on May 4.

For each side-by-side comparison, players’ athleticism is being judged against all other players (regional and national) of the same position group to test at a CFL Combine since 2001.

Some were more difficult this year than in recent history thanks to the unique body types and performances, but finding the closest comparison is all the fun. Let your imagination wander. 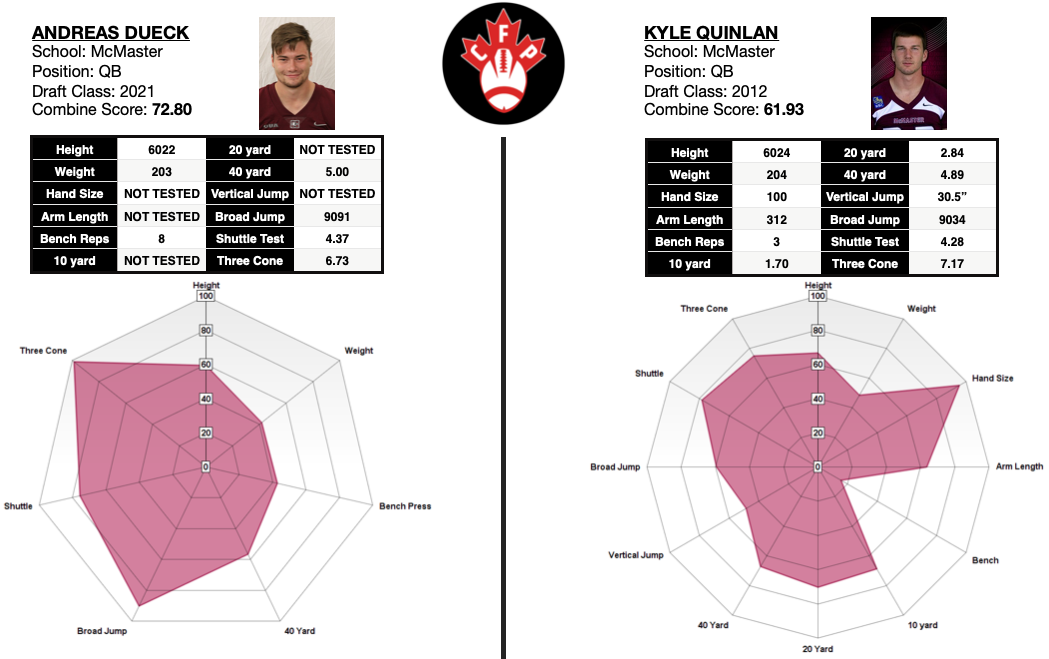 I know, I know.. A couple of Mac guys. I promise this is not an excuse to shoutout an all-time great teammate but this is the closest I could find for Dueck’s unique size and athleticism.

Eric Dzwilewski was too small, Theo Landers was too fast. The relation of height to weight and quickness connects these two far beyond their choice of post secondary institution. 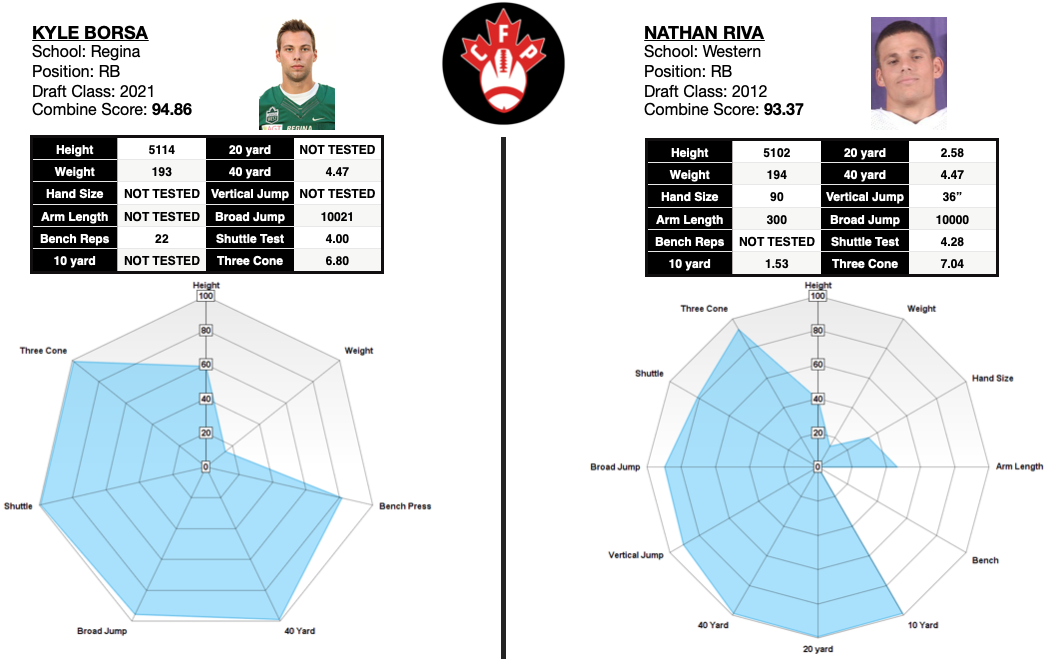 It’s pretty tough to find someone who aligns with Borsa and Riva lacks the height/stride of 2021’s offensive combine star but the athleticism is similar, as in freaky elite. 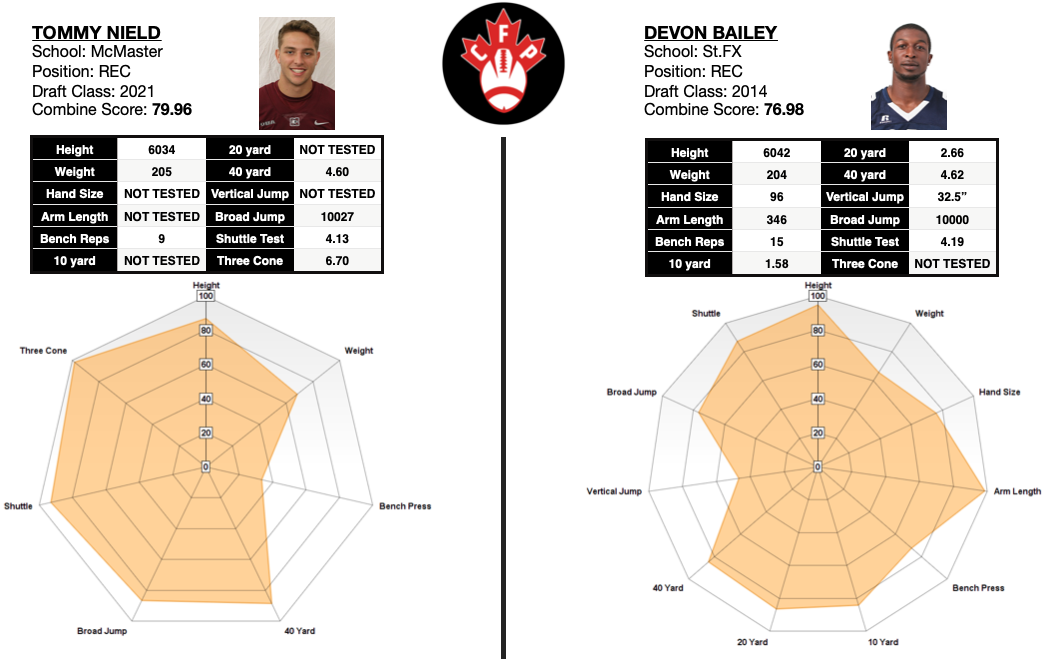 Bailey’s length set an unattainable standard but the height-weight-bench combo with standout quickness, speed and broad jump scores drew these two together. 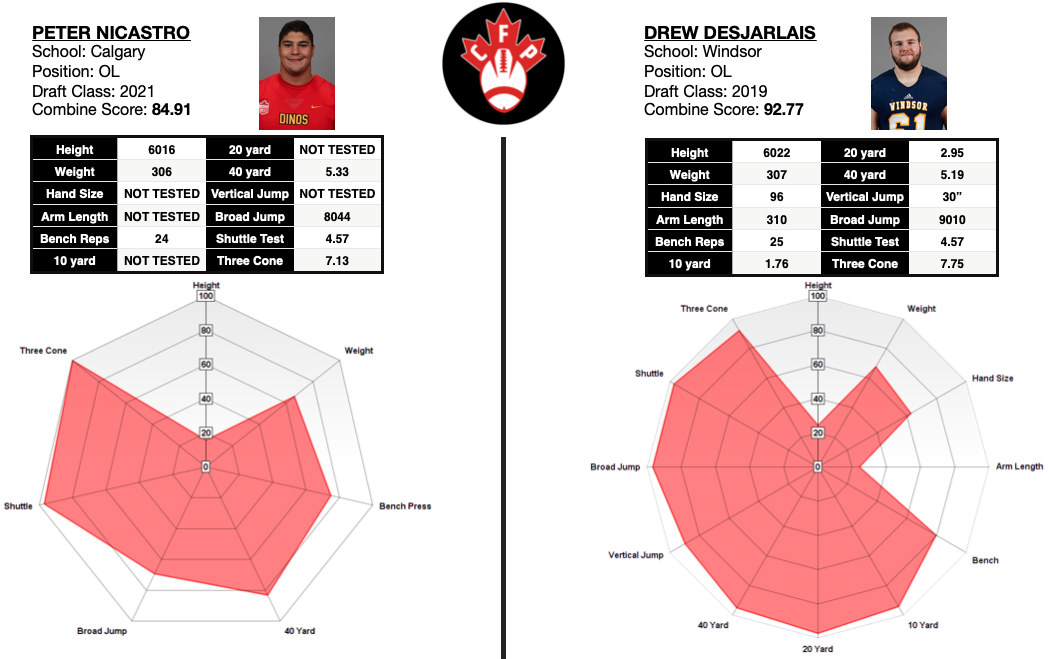 Desjarlais blew everyone away in the 2019 CFL Draft on his way to winning the Grey Cup with Winnipeg as a rookie. His numbers are largely too lofty for the well-rounded draft class of 2021, which lacks that true standout punch but Nicastro’s compact build and athletic upside are as close as it gets. 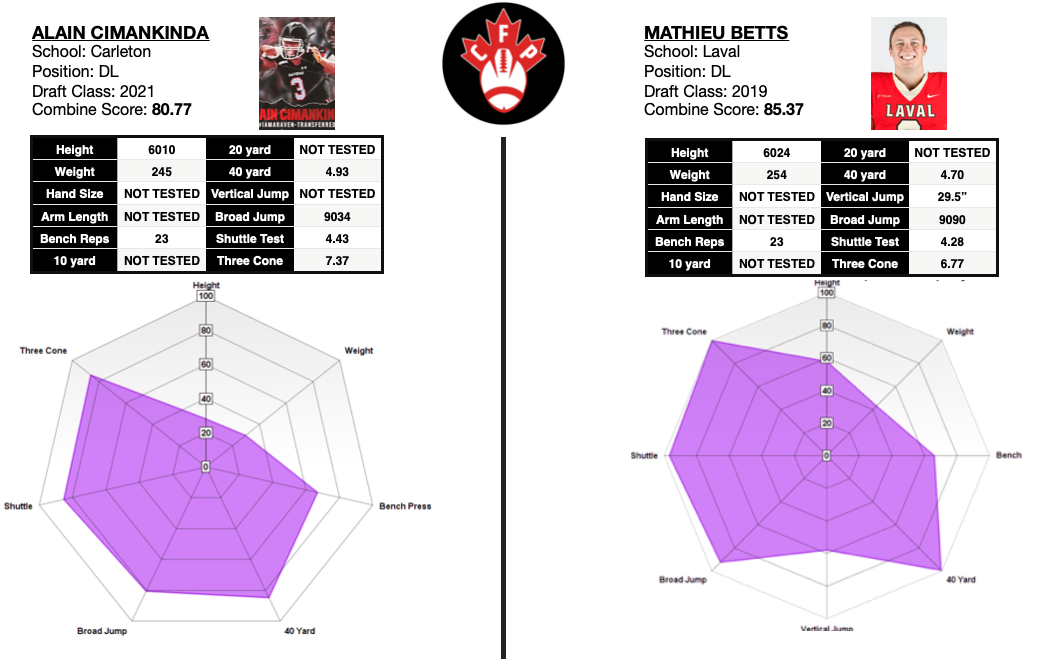 Both pack a unique punch being slightly undersized but are quick off the ball with a variety of power and finesse moves to get into the backfield. 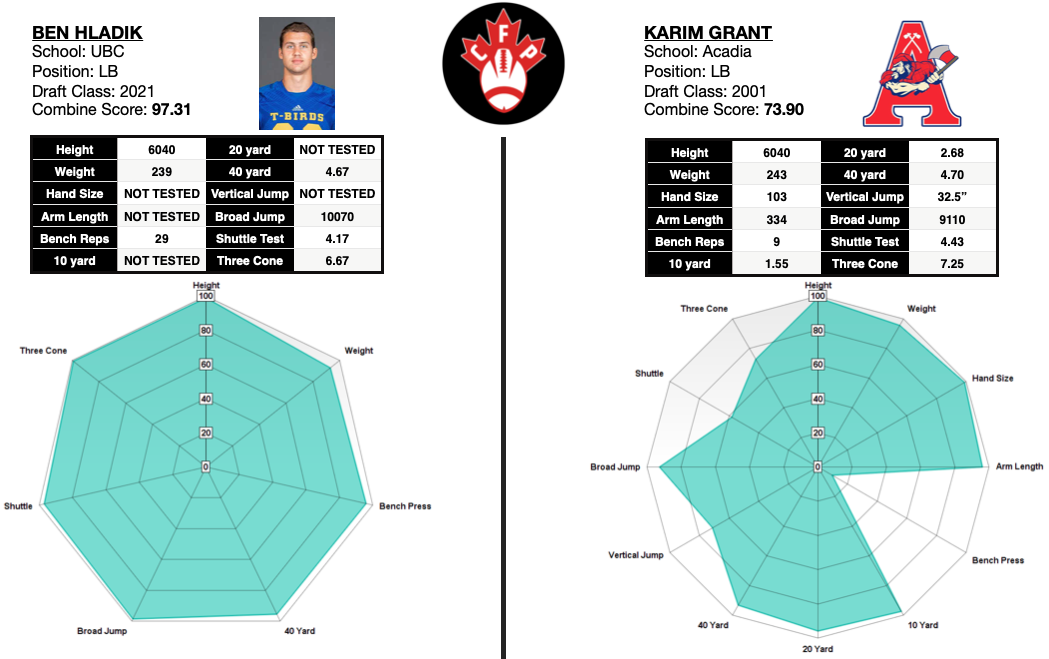 I had to go all the way back to 2001 to find another linebacker of Hladik’s size who tested remotely close to the elite performance of the UBC star linebacker’s 2021 virtual combine.

Grant’s bench number can’t hold a torch to Hladik’s but the size and ability to run are special for both, two decades apart. 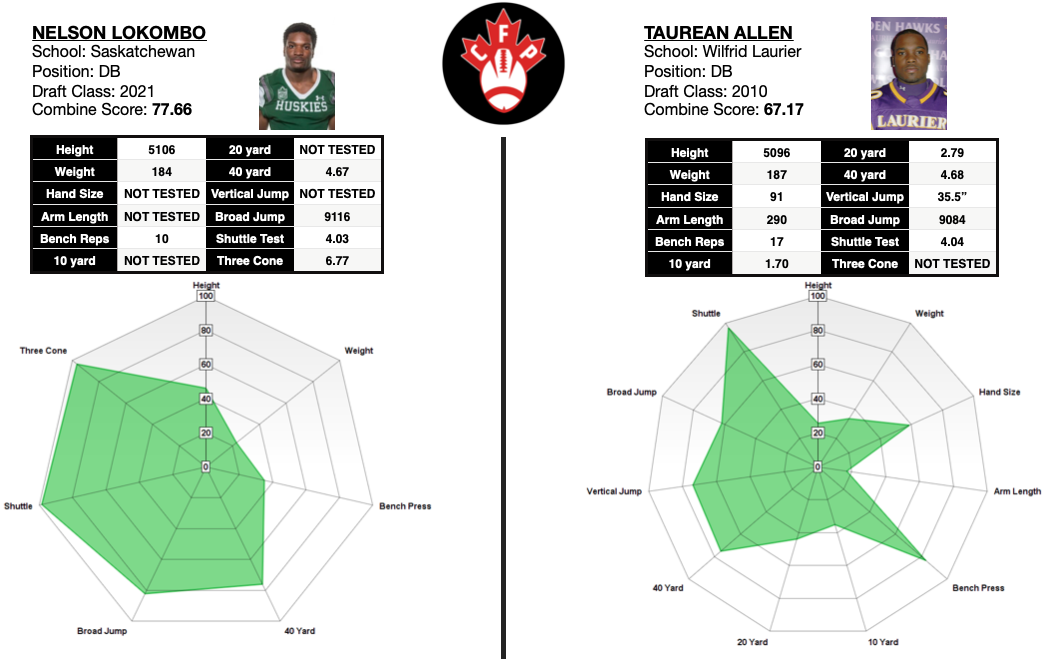 In his time at Laurier, Allen was a well respected ballhawk who might not have tested out of this world, but could make special plays on the ball relying on speed and quickness to get there. Lokombo might be undersized, but he has the range to get anywhere on the field. 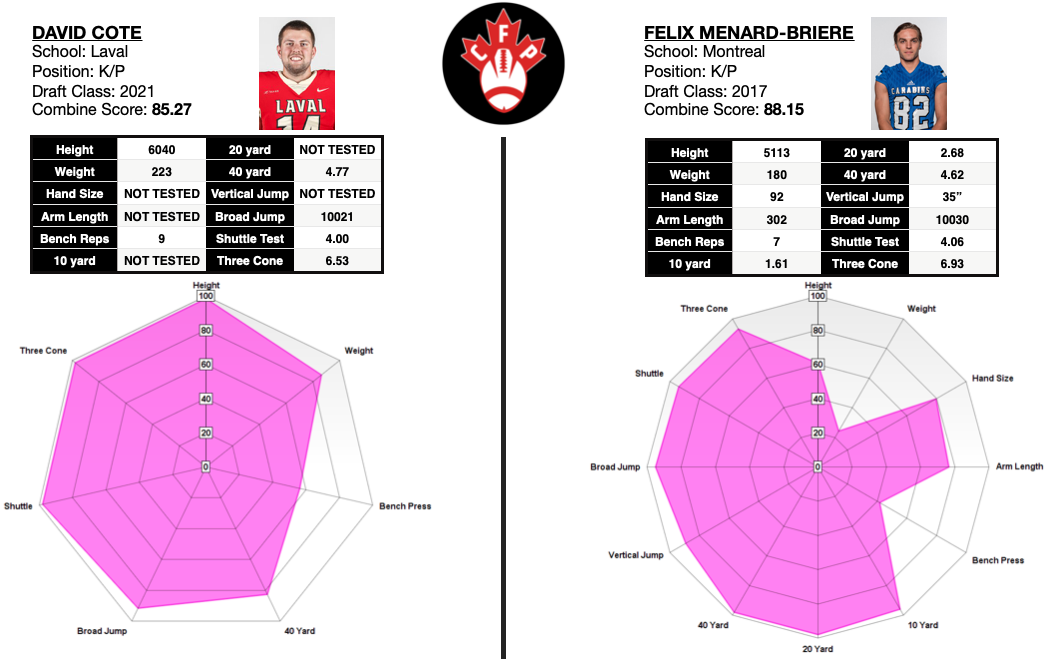 There is no size comparison for Cote who measured in at a whopping six-foot-four and 223 pounds. That’s unheard of for a kicker and he moved as well as five-foot-11, 180-pound Menard-Briere at the 2017 Eastern Regional Combine.