Deane Leonard’s long-winded journey to the 2021 CFL Draft was set in motion when his father, Kenton, made the decision to travel north and play for the Calgary Stampeders in 1992.

The defensive back spent seven seasons with the Stamps, taking home a Grey Cup with the franchise in his first season.

Now, his son is ready to make an impact at the next level in the same position as his dad.

Leonard really started to get into football in the ninth grade. Up to that point, he had been a running back, but at Notre Dame High School in Calgary, he made the switch to defensive back and started to cement his love for the position.

MORE DRAFT COVERAGE
» CFL Scouting Bureau Rankings: Final rankings ahead of the CFL Draft
» Draft Tracker: Follow along on May 4
» Bandy ‘overjoyed and grateful’ for chance to play pro football 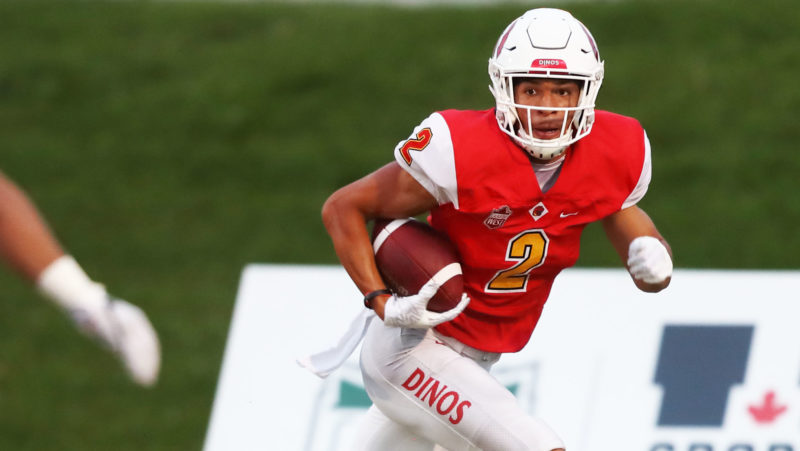 After excelling as a DB for the rest of his high-school career, Leonard did the recruiting rounds for the various U SPORTS programs, but he didn’t stray away from home, landing at the University of Calgary.

With the Dinos, Leonard appeared in 23 career games, he finished with 47 tackles, one tackle for loss, one sack, and six interceptions. He was named a two-time All-Canadian and also helped Calgary clinch its fifth Vanier Cup over Montreal in 2019 — which is, unsurprisingly, his favourite moment with the program.

In 2020, however, Leonard was at an impasse. The Canada West season was cancelled before it had a chance to begin due to the COVID-19 pandemic. Leonard and his teammates were sure they could run it back, so when they didn’t have the chance, it was a blow to the whole locker room.

Leonard had a passion to play against the best, so he made the decision to enter the transfer portal in hopes of landing a Division I offer down south. He did just that, signing with Ole Miss.

Not only was the culture shock of moving to another country going to be difficult, but he was headed for arguably the best conference in collegiate football, which featured the likes of Alabama, Georgia, and Florida, to name a few.

“The jump was not as smooth on the inside as it was on the outside,” Leonard explained. “It was tough. There were a lot of learning curves to deal with…You have to learn a lot of new techniques and the 11-man game in general. And only having a month to figure that out before you have to go and play the No. 5 team in the country, it was tough.

“I just kind of kept my head down and kept on working and it ended up working out.”

In his eight games played during the 2020 campaign with the Rebels, Leonard finished with 14 tackles, four pass defences and a fumble recovery.

Like many prospects, Leonard has his eyes set on making it in the pro ranks. He’ll be looking ahead to both the NFL and CFL Drafts, respectively, where he has the chance to make his dream a reality.

His time playing at the top level of collegiate football has certainly sharpened his skillset and put him in a great position, both mentally, and physically, heading into draft day.

“When I played at Calgary, I went into every game saying, ‘Nobody is going to catch a ball against me.’ Now, I’ve just learned to play with that chip on my shoulder and that edge to just go and play hard,” Leonard said. “As a corner, you could just cover somebody, or you can try and go after the ball and make plays. I pride myself on trying to get the ball and making plays.”

As one of the top defensive backs in the CFL Draft class, there will be no shortage of suitors vying for his services once May 4 rolls around — he could even find himself in familiar surroundings, playing back at McMahon Stadium with the Stampeders, just like his father did.

“That was always my goal; to get drafted into the CFL. So it’s going to be a really cool moment when I do,” Leonard said. “I think it’ll be really cool for (my dad). He’s my biggest fan when it comes to football, and I think it might be more special for him.

“I think it’s just a blessing to be able to play professional football and this is just another blessing.”