Jake Burt will always remember what it felt like to be a Boston kid that went from watching the New England Patriots on TV to setting foot inside Gillette Stadium and being a part of the team.

Very few athletes get the chance to do that twice. Burt could be one of them.

The six-foot-five, 230-pound tight end was born in Regina, but moved with his family to Boston when he was about four years old. A natural athlete, he starred in three sports in high school — including spending time as the top-ranked volleyball prospect in the U.S. — before football scholarship offers started rolling in.

He eventually chose Boston College, where he spent four years before signing as an undrafted rookie with the Patriots just over a year ago. He spent the 2020 season with the team on its practice roster before becoming a free agent over the winter.

Burt is a late addition to the CFL Draft and could be a tantalizing option for GMs across the league. A few days out from the draft, the 24-year-old had spoken with all but one team.

MORE DRAFT COVERAGE
» Mock 2.0: Who will Hamilton take first overall?
» Draft Tracker: Follow along on May 4
» Chance of being drafted ‘surreal’ for Maine’s Stevens 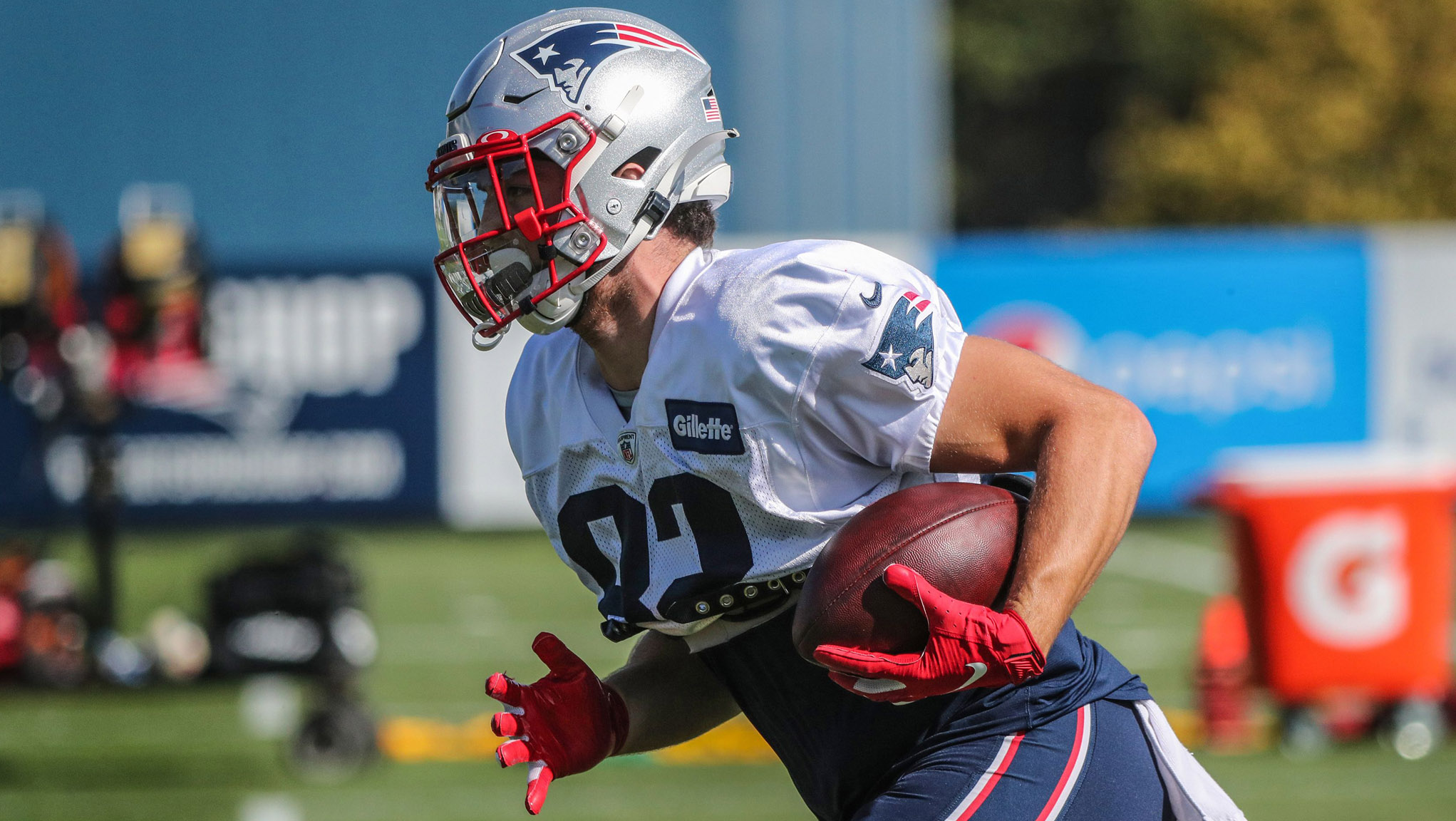 “I sat down with my parents a month or two ago and we really laid out the option of playing CFL,” Burt said.

“To be able to go home and play for the country I was born in…being able to experience Canada like that while playing football is just an amazing opportunity. And I’m so excited to have shot at the CFL.”

Burt has family scattered across Canada. His father, Scott’s side of the family is from Newfoundland. Scott was an athlete too, playing water polo for Canada’s national team, which led to him playing collegiately at UC Santa Barbara. His mom’s father is in B.C. and his mom’s mother in Saskatchewan. His brothers are in Winnipeg and Calgary.

Like every draft-eligible athlete, Burt just wants to be chosen by a team on Tuesday (7 p.m. ET, TSN). He has enough family to get support from just about anywhere, but he thinks he knows what it would be like to play for the Riders.

“It would be an unbelievable experience to play for Saskatchewan,” he said. “Just because of the history of me being from there, getting to experience the culture that I never really got to, but at the same time whichever team gives me an opportunity I’m going to take advantage of it and thrive wherever I’m at.

“Maybe it’d be cool, but at the end of the day it’s business and I’m coming to Canada to play football and win a Grey Cup. Whatever team is on board with me doing that, that’s where I want to go.”

There isn’t a straight translation for a tight end coming from four-down to three-down football and Burt knows that. He says that his time with the Patriots let him evolve as a receiver and he stressed his versatility on the field. 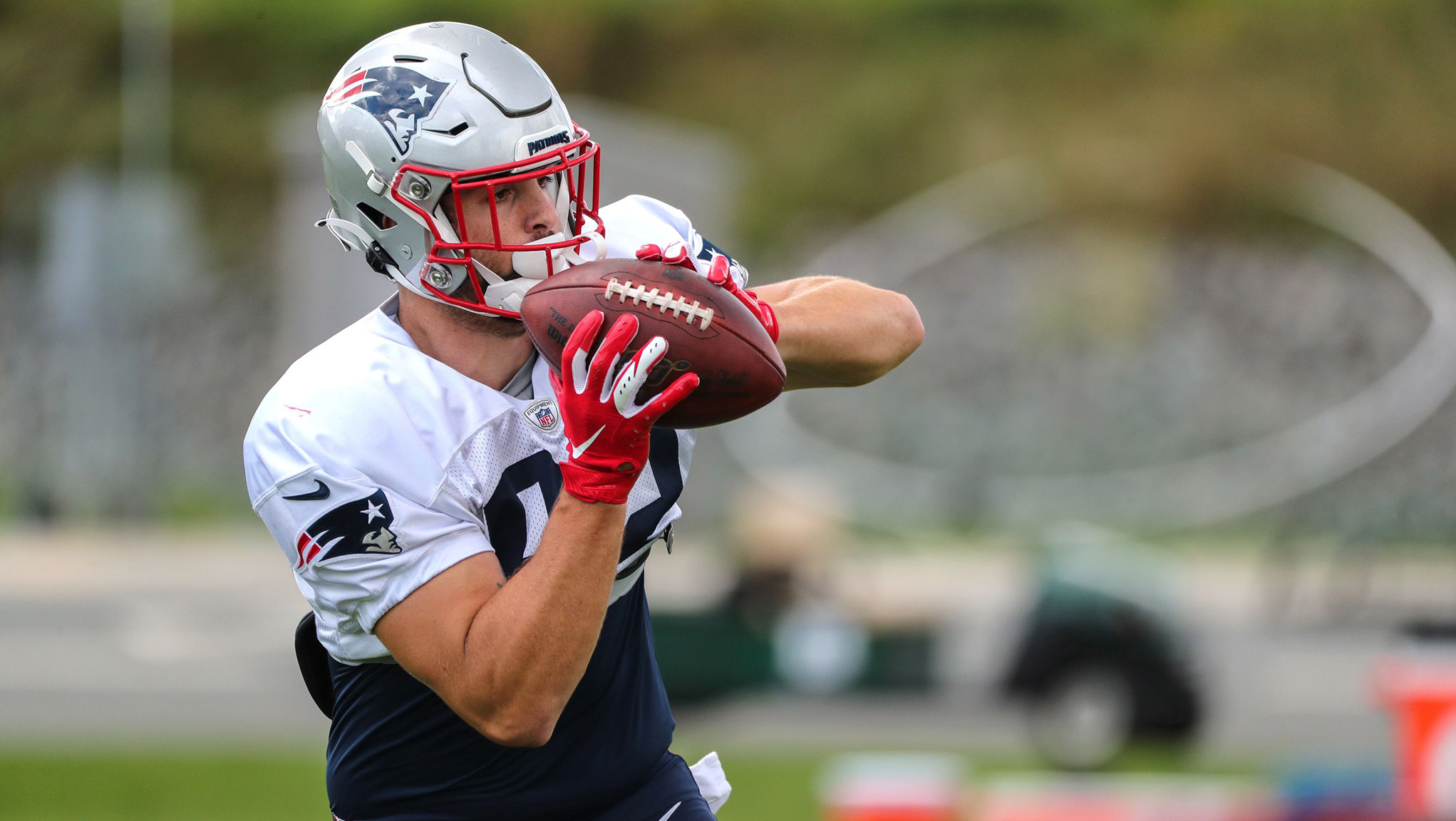 Burt felt he grew as a receiver in the year he spent with the Patriots and would love to show a CFL team the versatility he has in his game (Courtesy of the New England Patriots/Eric J. Adler)

“Where I found myself excelling this past year was getting open and catching the ball. That’s what I did very well. I used my speed and my size. I’m not as heavy as everyone thinks. I’m 242 to 245 (pounds), I run well,” he said.

“I bring a lot to the table because I can play tight end, I can go in the backfield and play fullback, I can go in motion. I’ve done countless jobs throughout my football career. I was a high school quarterback. Then I went in as a receiving tight end at BC and I learned how to block there and then I got to the Patriots and I got to really elevate my pass-catching game again and my speed and my route-running.

“I feel like I can definitely excel at receiver, make game-changing plays. I want to make championship plays, I want to win games, win championships with that ball in my hands. I can put a lot of different hats on.”

Burt’s fit might be the biggest question over his short time in the draft spotlight. On their pre-draft Zoom call with media, TSN’s Duane Forde and CFL.ca draft expert Marshall Ferguson saw some interesting possibilities for him.

Forde pointed to players like Nikola Kalinic in Hamilton and David Mackie in BC as players with similar body types that were both taken in the second round, which is where he thought he could see Burt go.

“In today’s CFL you sort of go tight end/h-back/fullback in terms of deciding on the position and what the role is,” Forde, a former fullback that said. “I think that that’s how teams are going to evaluate him position-wise, as opposed to sometimes you get a guy without a position who may be a tweener. I think that would be Jake Burt’s role.”

Citing that the fullback position is near and dear to his heart and that with fullback roles shifting to specialty use in the Canadian game, there’s an interesting supply and demand situation being created at that spot.

“When you have the 220-pound kid who’s a good athlete who comes into a Canadian university, the coach is going to go, ‘Right, you’re moving to linebacker, a defensive end, because I’m not going to use this 220-pound great athlete for only 10 snaps a game in Canadian university football,’” Forde said.

“The result is on the other end, that you don’t have as many sort of fullback bodies being produced.”

“At some point, someone’s going to decide to go full counterculture and go with a true tight end,” Ferguson said.

“Is it going to be this year? Probably not. I mean, realistically, it’s just not something that I see. But you see some of the packages that have had success, like in Hamilton and at times BC with Kalinic and Mackie and I think you start to imagine that those guys could come in and play.”

Burt has a strong football resume and brings size and athleticism to this draft. His ability to wear different hats will be key for him finding a fit with a CFL team. A late addition to the draft, he could be something of a disruptor to both mock drafts and the whiteboards that are in CFL teams’ headquarters as we get into the final hours ahead of Tuesday’s draft.