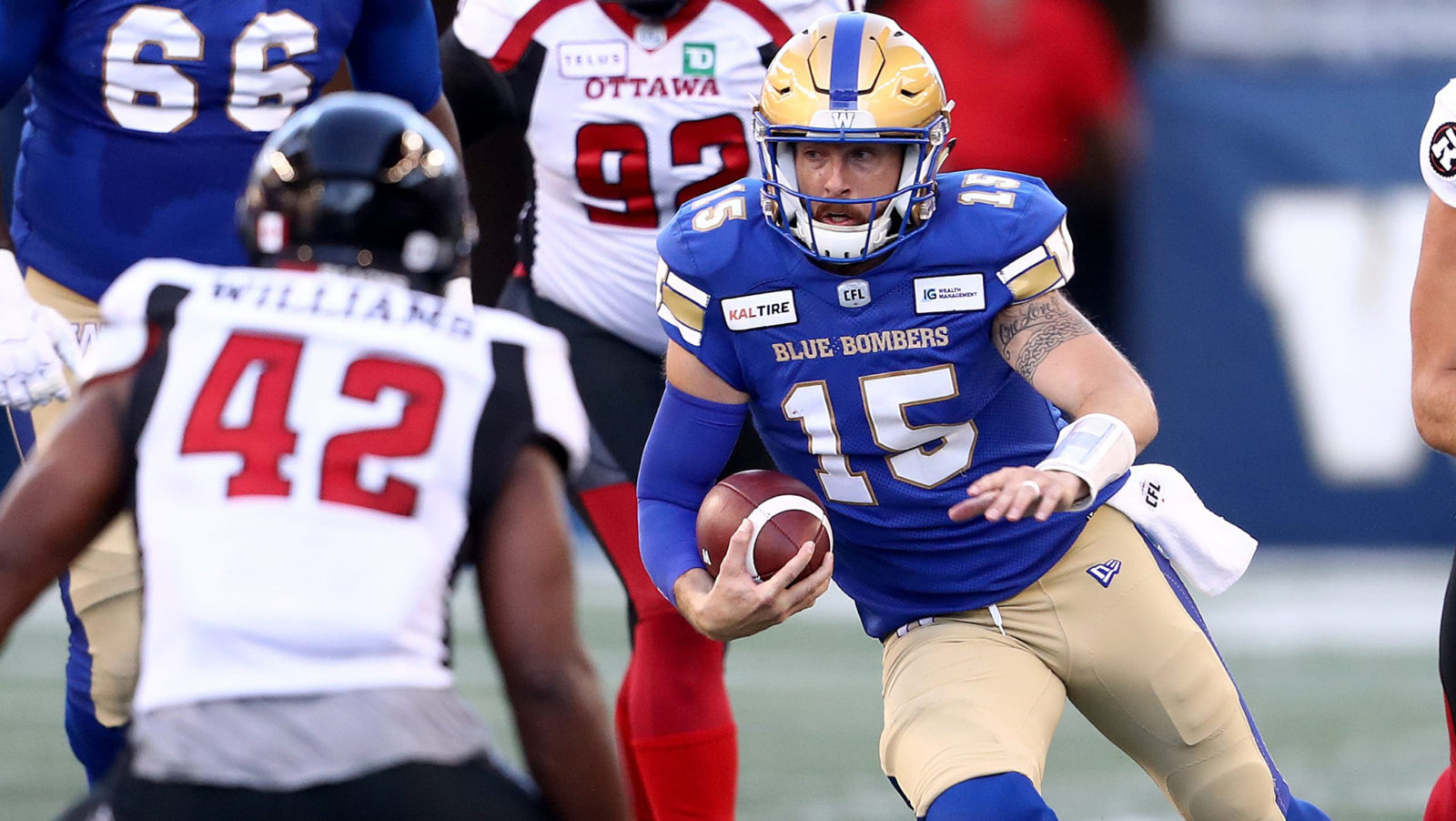 Welcome to the middle of May. At this time last year and now this year, we’re usually getting set for the first weekend of training camp.

We, the media, are tucked away looking at bios and rosters to dig out story lines and feature material.

The usual top story lines are the new faces or the interesting cap battles. If there were a coaching change over the off-season, it is seeing how the new boss establishes himself and his philosophy on the team.

And trust me, with another delay to the 2021 season after last year was canceled, there are plenty of story lines that I (and you at home) have been waiting to play out for over a year!

Here are some of the top things we were all pondering a year ago that we’re still pondering today. 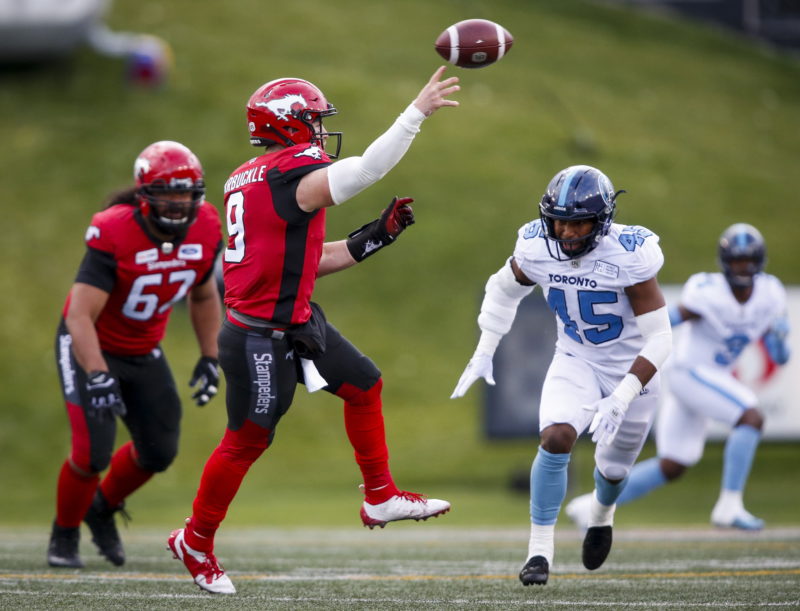 Nick Arbuckle filled in well for an injured Bo Levi Mitchell in 2019. After going from Ottawa to Toronto, will he find the long-term success he’s seeking? (THE CANADIAN PRESS/Jeff McIntosh)

Is Nick Arbuckle the next great QB1?

Of course, Arbuckle is on a different team than even the one he was on a year ago but the question remains. Now with Toronto, through Ottawa, Arbuckle is in the situation many thought made the most sense for him when he was dealt to Ottawa last year.

Arbuckle is in Toronto with a rookie head coach in Ryan Dinwiddie but a coach that worked closely with him in Calgary. Bring in Eric Rogers and Juwan Brescacin and there are the makings of some built in chemistry already with his former Stampeder teammates.

Arbuckle finished off 2019, subbing in for Bo Levi Mitchell, with three games of 350-plus yards passing and a TD-INT ratio of 11:5.

Toronto has shown this off-season they aren’t in a slow rebuild; they want to win right off the bat. It’s still to be determined if Arbuckle can take full control of an offence and lead a team to wins over the course of a season (albeit shortened).

Is Ryan Dinwiddie ready to handle the top job?

That brings us to the other question in Toronto going into the season, which is Ryan Dinwiddie being given the top job.

It’s rare to see someone go from a position coach to a head coach without a stop as a coordinator along the way. Though working side-by-side with Dave Dickenson in Calgary, Dinwiddie was given more responsibility within that offence than a regular position coach.

However, it is a big jump. The 40-year-old former quarterback may be the benefactor with a year to get to know his players and settle into the office. It’ll be interesting to see if a year-long runway to land the plane does him much better than having three months to dive into the new job. 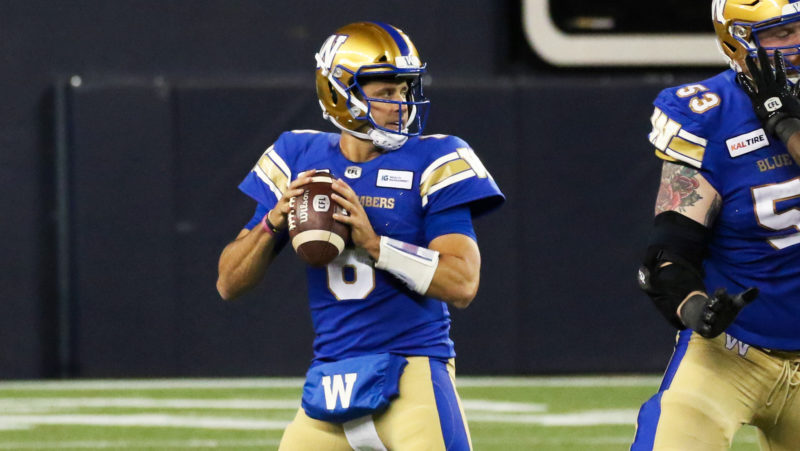 After leading them to the Grey Cup in storybook fashion, Zach Collaros was handed the keys to the Bombers’ offence (Photo: BlueBombers.com)

Will going all-in on Zach work out for Winnipeg?

I’m curious if the year off for Zach Collaros was just what the doctor ordered, literally. There was no question the last few seasons Collaros has been banged around.

But after an incredible October/November with the Winnipeg Blue Bombers that helped lead them to ending their drought and winning the Grey Cup, it was still interesting to see how the QB situation played out in Bomber land.

General manager Kyle Walters could have kept the status quo with Matt Nichols, who also had his injury concerns, but is going with the man who won the championship.

Nichols is now in Ottawa, ready to rekindle his abilities with former Bombers’ offensive coordinator Paul LaPolice and the Bombers are all-in on Collaros with Chris Streveler sticking in the NFL.

Collaros can win and it was great to see him overcome tremendous adversity in 2019 and end up a champion after his trade from Saskatchewan to Toronto and then Toronto to Winnipeg and the drama surrounding both those trades.

If the year off gives Collaros the ability to stay on the field more consistently, then Winnipeg should be in for another successful season. Another question for Winnipeg: What will the impact be of Paul LaPolice departing on that offence?

Let me be the first to say that it took WAY too long for Paul LaPolice to find another head coaching job. Sure there was interest before Ottawa but I can’t believe the coach with a tremendous resume of success had to wait nearly a decade for another opportunity.

In Ottawa, LaPolice brings his power to adapt to what he has at his disposal. It’s always been his strength. He did it with Zach Collaros to mold an offence quickly around Zach’s strengths in 2019, rather than try to force Zach into the system.

It’s why Matt Nichols and Chris Streveler, who have two entirely different skill sets, could move seamlessly in and out as LaPolice had playbooks built to suit them.

While I believe Rick Campbell will be great in BC and is a remarkable head coach, LaPolice’s offensive prowess should be a welcome shot in the arm for a REDBLACKS team that finished dead last in points scored in 2019. 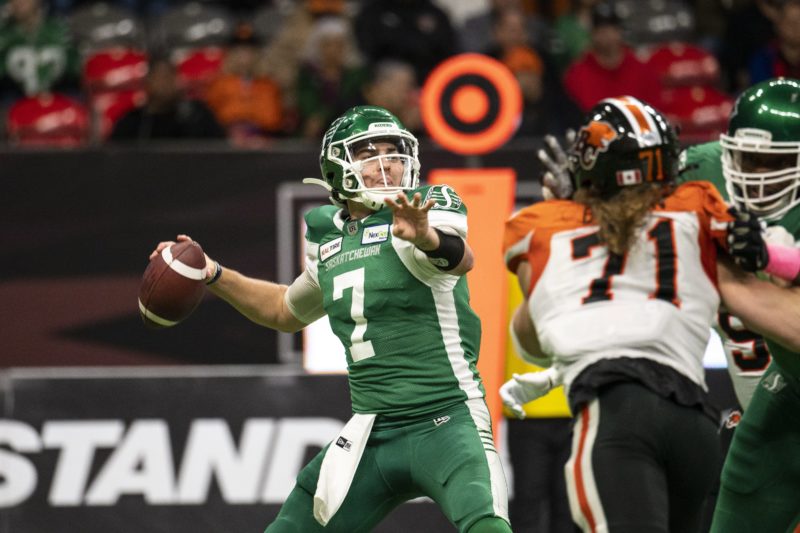 In a season that saw QBs across the league deal with injuries, Cody Fajardo was a revelation and led the league in passing. He could take a step forward this year, working with OC Jason Maas (CFL PHOTO – Jimmy Jeong)

Can Cody Fajardo find another level with Jason Maas?

One of the biggest storylines from the 2019 season was the emergence of Cody Fajardo as a No. 1 quarterback in Saskatchewan. It’s what helped lead the Bombers to get Collaros, as Fajardo took hold of the starting job in Saskatchewan, leaving Collaros expendable.

The big talk all season in Saskatchewan was the offensive playcalling by coordinator Stephen McAdoo. He was conservative to say the least and when Jason Maas became available, Craig Dickenson jumped to add him to the staff.

Maas brings to the table a penchant for allowing quarterbacks to take a risk by going downfield and be much more aggressive with the offensive play calling. Maas’ mindset seems to mesh a lot more with Fajardo as Fajardo has the same mindset of Mike Reilly, who saw tremendous success with Maas in Edmonton.

I’ve been waiting a year to see what this offence looks like with young speedsters like Shaq Evans and Kyran Moore, who can spread the field and a multi-dimensional back in William Powell, who looked extremely good in the seven games he played in Maas’ offence back in Ottawa in 2015.

But the question for Fajardo is two fold.

Second, will his nice guy image mesh with a coach who comes in with a reputation that had many reporters asking if he’ll throw as many headsets in Saskatchewan as he was seen doing in Edmonton?

Rick Campbell’s hiring in BC made waves at the end of 2019. He takes over a Lions team that has a lot of weapons but fell short in a five-win season (Photo: BCLions.com)

Can Rick fix the Leos?

Rick Campbell arrived in BC last year in a situation that was looking for a calming voice.

The DeVone Claybrooks hire seemed great at the time but it quickly soured as the team couldn’t hold up against the best of the West and it was Claybrooks’ defence that was holding them back.

There were big things expected when the Lions acquired Mike Reilly in free agency and going 0-10 in the West division was unacceptable.

In walks Campbell, who has seen it all in the CFL and was able to build an expansion team into a perennial contender with another star quarterback in Henry Burris.

The card Campbell wasn’t expecting dealt was a change with the general manager, as Ed Hervey left the organization in 2020, leaving Campbell as a co-general manager.

Campbell’s veteran leadership looks like a good fit for a team undergoing a lot of change with ownership questions surrounding the team as well.

If his work in Ottawa is any indication, a much more prepared and focused Lions team could be making a move out of the basement of the West Division.

2020 was going to start off with the Ticats being Dane Evans’ team, with Jeremiah Masoli likely still rehabbing his knee injury. We were all wondering though, how Masoli’s return could impact the team’s thinking at the quarterback spot.

The Tiger-Cats have two top-caliber quarterbacks but now that both are healthy, it’ll be an interesting dynamic for the defending East Division champions.

The danger is if the starter struggles, how quickly you turn to the next guy, who will be chomping at the bit.

Masoli and Evans say all the right things when it comes to their relationship, but we’ve seen these stories play out before. No professional athlete wants to watch the game from the sideline and both will believe they give their team the best chance to win.

What is interesting is that Masoli was a potential free agent in 2021 but instead re-signed with the Tabbies before free agency. That should be a good sign the dynamic duo will make it work in their goal to end Hamilton’s Grey Cup drought.