A Picture and a Thousand Words: Ridgway’s GC-winning field goal 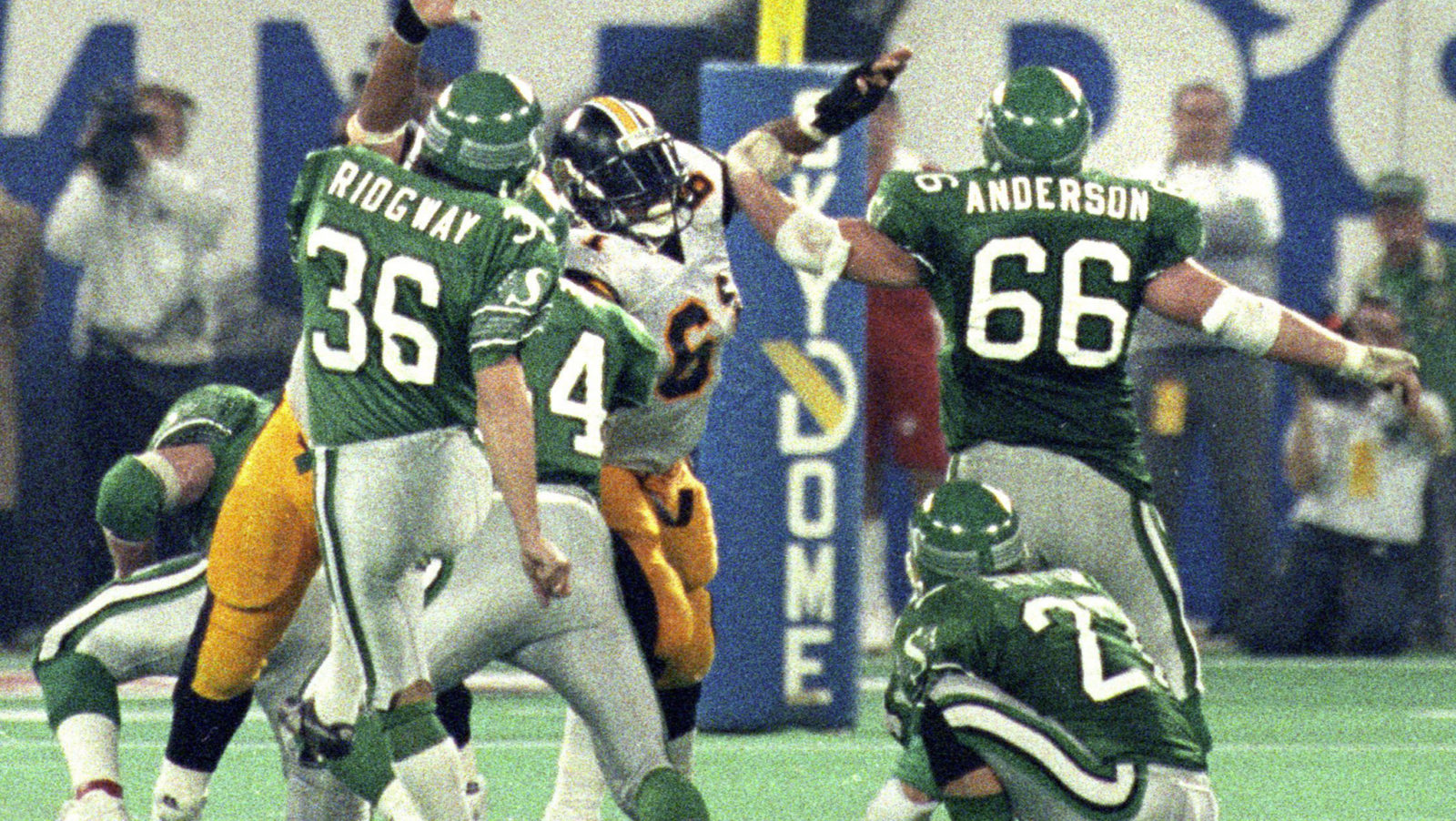 A Picture and a Thousand Words: Ridgway’s GC-winning field goal

Prologue: I love great photos. Especially great photos of big moments. I can stare at them for great lengths of time, first seeing what is obvious, then perhaps what is not so obvious. A great picture gives you reason to be thoughtful and the ability to somehow pause the relentless march of time. They’re wonderful in that way, allowing the viewer to savour the triggered memories of the event as long as they’d like to and to exercise their imagination as they consider all the details of the image, attaching layer upon layer of value to even a small sliver of the photo, if they so desire.

The old adage is that ‘a picture is worth a thousand words.’

I’d like to change that saying, slightly, and revisit some of the great photos in CFL history.

With that in mind, here is: A Picture And A Thousand Words.

RELATED
» Watch the 1989 Grey Cup on the On Demand Portal powered by Mark’s
» Nye: How the ’89 Grey Cup changed my life
» O’Leary: Some would-be training camp thoughts 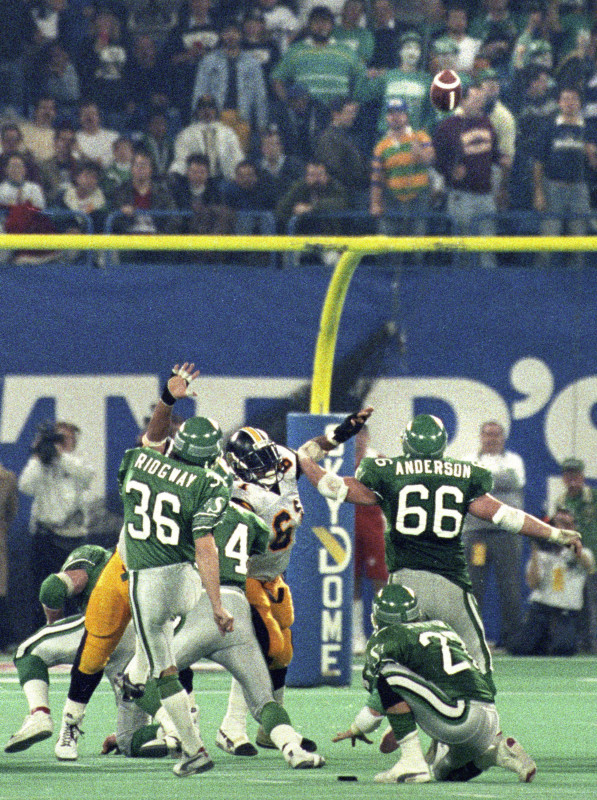 It’s the pinnacle moment of what so many of us remember as the greatest Grey Cup game ever played.

A game of sea changes, glittering individual efforts and of haymakers traded in unceasing fashion, ending with Dave Ridgway’s 35-yard, game-winning field goal in the Saskatchewan Roughriders’ 43-40 win over the Hamilton Ticats.

One particular photograph from that game has always seemed a little more magnetic.

Taken for Canadian Press by photographer Ryan Remiorz on November 26, 1989, it is in my opinion a masterpiece of timing and of framing. A gargantuan moment, captured just prior to the full, emotional effect of that moment being unleashed.

It’s a photo that perfectly freezes in time that split-second before both soaring elation and crushing dejection are born, twins that couldn’t be more unalike in personality.

Ball in flight, onlookers captured at the peak of suspense and players giving every last ounce they have remaining.

Where to start? My eyes always go to the ball, then move quickly to the Saskatchewan fan to the left of it. Clad in green, face painted, arms slightly raised. It’s the exact moment when hope is being transformed into joy. It’s beautiful.

I can’t see his face but think the moment is somewhat the same for Saskatchewan’s Mike Anderson.

The veteran offensive lineman, at this point in time, knows that Ridgway has kicked the ball. Whether he’s heard the ‘thunk’ of Ridgway’s foot making contact, or if he just knows from experience that it had to have happened by now, he knows. He knows that he’s completed his assignment, helping to block up all-star defensive lineman Mike Walker. Now his head has snapped up as he concerns himself with the only thing that matters at this moment: Where’s that ball?

Anderson played all 12 of his CFL seasons in Saskatchewan after being drafted as a territorial exemption in 1984.

Ten years later, he claimed his one and only CFL-wide All-Star selection and that came a year after he’d first been released by the Roughriders, the story goes, in a salary reduction move. Anderson suited up for every regular-season game of the last 10 years of his career and was inducted into the Saskatoon Sports Hall of Fame in 2018.

Follow Anderson’s head straight down and you get to holder Glen Suitor, who has also completed his job, cleanly fielding a slightly off-centre snap that had him pulling his hands into his body to snag the ball, then fluidly pulling it into place as Ridgway makes his last step before contact. This photograph catches Suitor the instant after he has dutifully kept his head down all the way through Ridgway’s blurry foot swinging through his line of vision. Like Anderson, he is concerned only with finding that ball as it arcs upwards.

Ridgway has kept his head down too and seems to be just about to pick up the flight of the ball, the angle of his head being slightly different than either Anderson’s or Suitor’s.

Above Ridgway’s head, a hand. Taped and braced, fingers spread wide, it’s the hand of a final, desperate attempt to alter the ball and the trajectory of CFL history.

It belongs to defensive tackle Ronnie Glanton and you have to believe that at this precise moment, it’s just about to dawn on him that his last-ditch effort has failed and that he too is about to swing his head around and upwards, to see for himself what his fate is.

Glanton played 11 games over two seasons with the Ticats and in the 1989 Eastern Final he dominated, making five tackles and adding three sacks. In high school, the native of Cottonwood, Alabama, was an All-Star offensive lineman. In college and in the CFL, he instead chased quarterbacks.

There’s a personal element to this photograph for me, stemming from the knowledge that I almost made it into it.

With minutes remaining in that game, I hustled down to field level with the rest of the media horde, to be in position to do post-game interviews. At that time, the protocols were much looser and the non-rights holders did not have to wait in the concourse of the stadium until they were allowed field access, which now happens after the Grey Cup has been presented.

I got off the elevator in time to see — at the far end — Hamilton’s Tony Champion laying out for what remains for me the greatest, clutchiest catch I’ve ever seen. So vivid is the memory that despite having since seen dozens of replays of it, the sight of Champion, stretching out backwards and horizontally, tiny and distant from 140 yards or so away, remains the pre-eminent image of that moment for me.

I remained at the back of that end zone, as the Roughriders mounted their last-minute attempt to move into position for a shot at a game-winning field goal. From where I was standing, I could just see Ridgway’s head and shoulders as he prepared for the snap. But when that snap came, he disappeared behind a mass of dueling linemen; the white, black, gold, green and silver of the two teams’ uniforms blending into blurry chaos.

My head jerked up as the ball emerged from within that chaos and I held a microphone up to capture the sound of the deafening crowd.

I have that recording somewhere, but haven’t been able to locate it.

What I did locate, however, was my post-game radio report that features a giddy Ridgway laughing as he recounted the tale of what Suitor said to him prior to the kick.

I think of that every time I see this photo. That in the moments before this brilliant piece of art was rendered — where the loft of triumph and the torment of defeat are caught precisely at the intersection where they are to collide — Suitor attempted to take Ridgway’s mind off the pressure of the unfolding event by threatening to let a bear get him on a camping trip.

A legendary moment, a beautiful picture and one that is easily worth 1,000 words.