OTTAWA & VANCOUVER — The first Canadian member of an NCAA National Champion in 17 years is the top college football player from his home nation for his performance in 2020-21.

Hailing from Brampton, Ontario, John Metchie III is the winner of the fourth Jon Cornish Trophy for the top Canadian in NCAA Football as selected by a panel of voters comprised of professional scouts and media across Canada. 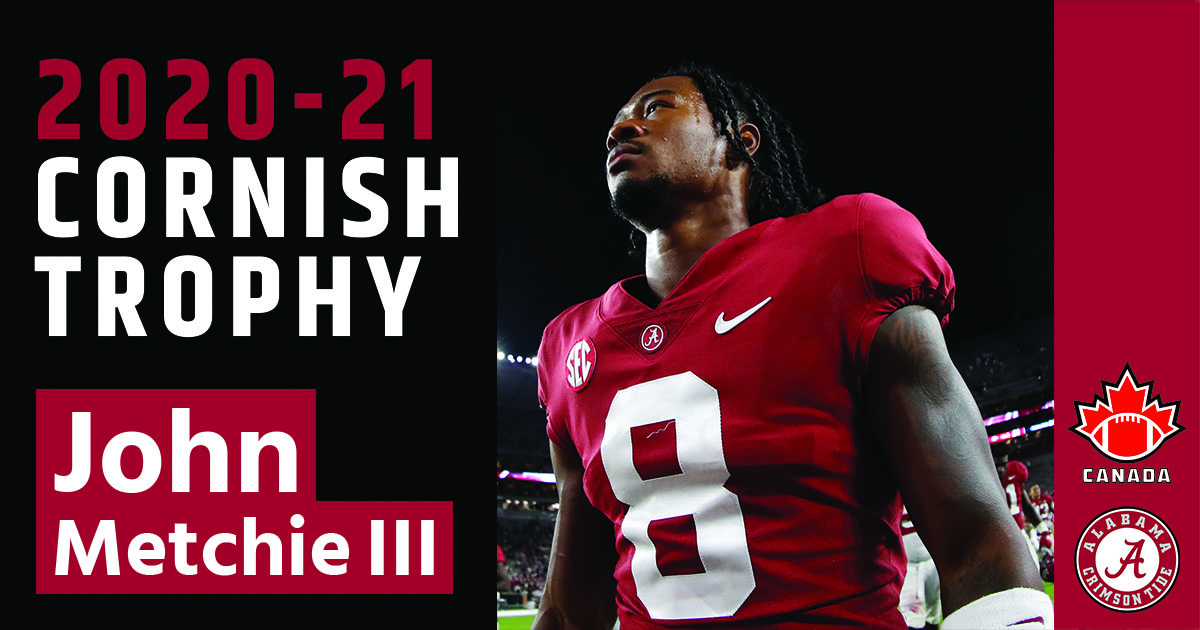 The competition was fierce at the top of the ballot between Metchie and runner-up Amen Ogbongbemiga, the outstanding Oklahoma State senior linebacker from Calgary, Alberta. Ogbongbemiga registered nine first-place votes to Metchie’s eight. However, Metchie polled consistently higher as the second and third choice of the national panel.

After getting spot duty in his freshman season of 2019, Metchie began 2020 as the Crimson Tide’s number three wideout. Metchie caught 55 passes for 916 yards and six touchdowns in 2020-21, emerging as Mac Jones’ number two target as Jaylen Waddle missed much of the season with an injury. He averaged 16.7 yards per catch to rank seventh in the SEC, totalling 916 yards and six touchdowns on 55 catches.

Against Texas A&M, he led all wideouts with 181 yards and two touchdowns on just five catches scoring from 78 and 63 yards out for the Tide’s first and last scores of the game. He earned offensive player of the week recognition from the Tide coaches for his efforts.

Against Ole Miss, he picked up special teams’ player of the week recognition from the Alabama coaches after recovering the Rebels’ attempt at an onside kick late in the fourth quarter. In addition, he contributed four catches for 75 yards on offence.

One of the highlights on Metchie’s reel drew national attention in the SEC Championship Game, and it wasn’t for his offence. Instead, on an interception return from Florida defensive back Trey Dean, Metchie channelled his defensive prowess, blindsiding Dean, separating him from the ball, and reversing the turnover.

Metchie was born in Taiwan and lived in Ghana before moving to Canada at the age of six. He started his football path in Ontario, then shifted stateside to play high school football in Hagerstown, Md., and post-secondary at the Peddie School in Hightstown, N.J.

The patrons have awarded previous Cornish Trophy presentations before the CFL and NFL Drafts. However, due to FCS spring football extending into May, the decision was made to extend the process to include the performance of all FBS and FCS players.

– With files from Football Canada