Edmonton receivers primed to put up big numbers in 2021 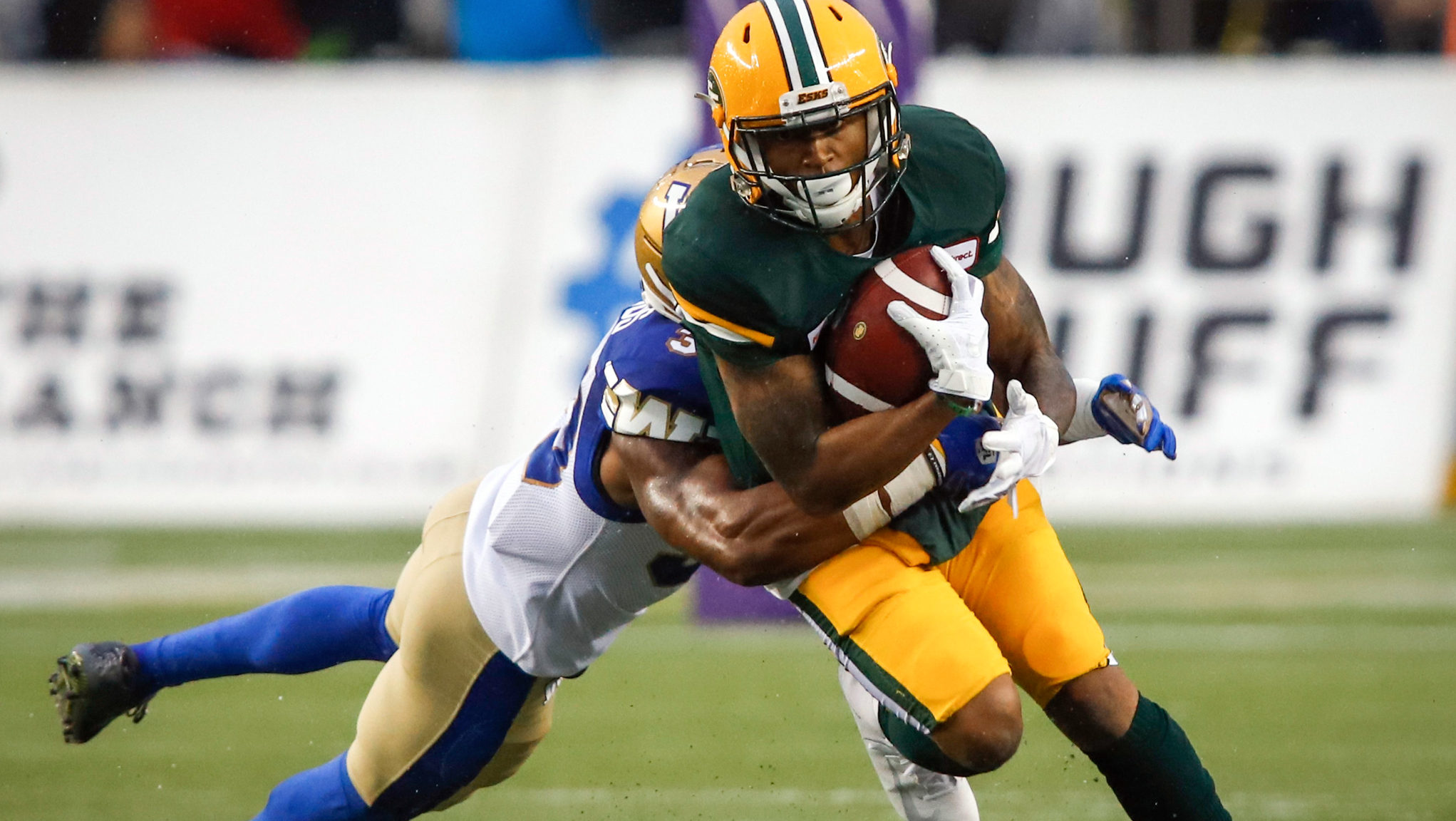 Edmonton receivers primed to put up big numbers in 2021

EDMONTON — While Winnipeg and Saskatchewan receive top billing as contenders for the always-competitive West — and Edmonton last, according to the way too early power rankings — there are plenty of reasons the Edmonton Football Club could flip the script in 2021.

The list starts with one of the CFL’s most accurate passers in Trevor Harris, continues with an offensive line that allowed the fewest sacks in the league in 2019, and ends with an electrifying group of pass-catchers to lead one of the league’s most impressive offences on paper.

The receiving corps alone is reason enough to get excited about what’s happening under first-year head coach Jaime Elizondo this season, beyond just the highly-touted duo of Greg Ellingson and Derel Walker, which we wrote about back in March.

In Ottawa, with Elizondo as offensive coordinator, the REDBLACKS’ offence saw roughly 45 per cent of all passing attempts go through either Brad Sinopoli or Greg Ellingson in 2018 — an approach he could easily replicate with Walker and Ellingson this season.

But that leaves some other intriguing weapons, including a dynamic speedster and a Canadian in Tevaun Smith, to take on significant volume.

Who else will be catching passes in Edmonton? Let’s take a closer look at this dynamic group of receivers. 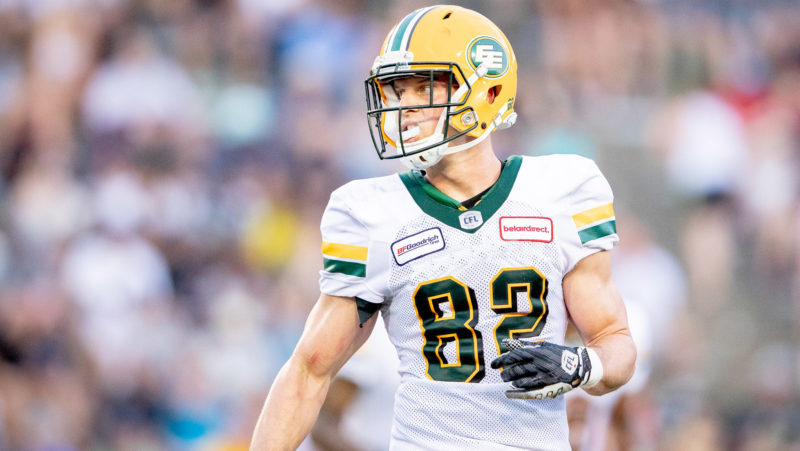 Edmonton’s offence will go as far as Derel Walker and Greg Ellingson can take it. And with Trevor Harris completing passes at his usual 70 per cent clip (last year he was closer to 72%), there’s a realistic chance both pass-catchers will set career highs in receiving yards assuming they’re healthy (Ellingson at 1,459 yards in 2017 and Walker at 1,589 in 2016).

On a game by game basis, Walker ranks among the most productive receivers in CFL history in catches (5.7 per game) and yards (82.0 per game). Ellingson is the CFL’s active receiving yards leader (7,265) and has reached 1,000-yards in five consecutive seasons, including his first year in Edmonton in 2019.

For Edmonton, essentially fielding two ‘No. 1’ receivers will create matchup nightmares for defences all season. But there’s a third receiver who is sure to cause problems for the opposition, and he just happens to have a Canadian passport

It would be unfair to call Tevaun Smith the third wheel in the Edmonton receiving corps, as Smith is so vital to what this offence will set out to accomplish in 2021. The 28-year-old finally arrived in 2019 — three years after being drafted eighth overall out of Iowa — and exceeded all expectations, piling up 632 yards and six touchdowns on 55 catches.

Smith was fourth on the team in targets (80) behind Ellingson (127), Ricky Collins (114), and DaVaris Daniels (92), and just five ahead of fellow national Natey Adjei (75) — a number that figures to increase this season, even if Ellingson and Walker are the focal point as expected.

With 4.38 speed (timed at his pro day in 2016), Smith is one of Edmonton’s most dangerous vertical threats and will have plenty of mismatches to exploit with Ellingson and Walker drawing much of the attention from opposing defences. Look for Smith to assert himself as arguably the CFL’s top Canadian receiver with a dominant 2021 season.

While the aforementioned trio will do much of the heavy lifting this season, Edmonton boasts a handful of complementary weapons that can contribute consistently and even move up in the queue in the event of an injury. In Elizondo’s offence in Ottawa, the fourth receiver typically had 10-15 per cent of the targets, which translates to roughly 65-98 targets in a season. Expect that to be near the lower end given the likely reliance on Walker and Ellingson.

A likely fourth option in Edmonton would be Armanti Edwards, the most consistent of any receiver on the roster. A quarterback in his college days with Appalachian State, Edwards is an exceptional route runner with reliable hands. He had his first 1,000-yard season in 2019 and has averaged 983 yards per season since joining the Argos in 2017. He was a favourite target of Ricky Ray, making him a natural fit with Edmonton’s current starter in Harris, who operates with similar style.

Another intriguing name is Rodney Smith, who brings size and length to the Edmonton receiving corps at 6-foot-5, 235 pounds. Smith broke out with the Argos in 2019 with 646 yards and five touchdowns, catching 51 of 70 targets. That includes a Touchdown Atlantic loss to Montreal, in which Smith caught all 12 targets for 136 yards. Harris had strong chemistry with a similar possession receiver in Tori Gurley with Toronto in 2015.

The other name to watch is Mike Jones, who arrives in Edmonton via free agency. Jones fell out of favour in Hamilton and sometimes struggled with drops, but is one season removed from putting up 841 yards and an impressive 17.2 yards per catch in 2018. The former 18th overall pick in 2016 has speed to burn, and is a big-play threat that could be the second starting Canadian on Edmonton’s offence in place of the departed Natey Adjei. 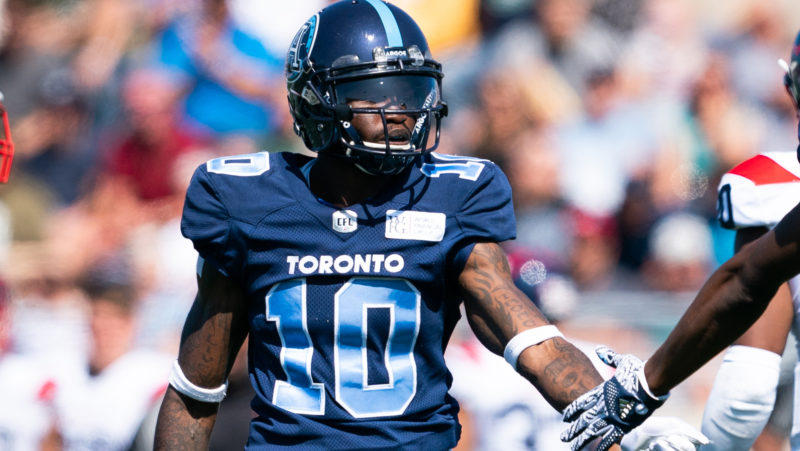 Armanti Edwards is coming off his first career 1,000-yard season with the Argonauts (Johany Jutras/CFL.ca)

With a large handful of receivers on the roster, competition will be heated when training camp starts up again this summer. There’s always a need for experienced receivers, especially in the event of multiple injuries to the starting lineup. Kevin Elliott, Kenny Shaw, and Joshua Stangby are capable fill-ins if necessary, though the trio has combined for just 20 catches in 2018 and 2019.

Kevin Elliott already has a rapport with the starting quarterback after the two played together in Toronto in 2015, when Elliott burst onto the scene with 50 catches, 642 yards, and eight touchdowns. Those are all career highs today, as Elliott failed to replicate his early success, being released in 2016 and making stops in Hamilton, Ottawa, and BC before signing with Edmonton in 2018.

A comeback at age 29 isn’t out of the question for Shaw, after injuries stalled a once promising career. Though he might be a longshot to make Edmonton’s roster, especially after Scott Milanovich left for the NFL — Milanovich was Shaw’s coach when he had 1,004 yards on 77 catches as a sophomore in 2016 — Shaw, Harris, and current Edmonton head coach Elizondo share a history after spending 2017 together in Ottawa.

Another receiver familiar with Harris and Elizondo is Stangby, who scored five touchdowns and added 478 yards as a sophomore in Ottawa in 2017. He’s 30 and hasn’t produced anything on the field in the last two seasons, meaning he’ll need to stand out in training camp if he’s going to make an impact in 2021.

After attending Denver Broncos training camp in 2018 and then joining Edmonton a year later, Bryce Bobo is a prospect of interest for the Edmonton Football Team. Bobo was productive with the Colorado Buffaloes, finishing seventh in school history in receptions (150) and 11th in yards (1,638). He scored game-winning touchdowns in back to back years against the Oregon Ducks, including this one-hander in 2016.

JaNardreon Jones (perhaps better known as J.J. Jones) signed with the LA Chargers as an undrafted free agent in 2018, eventually making the cut as a primary returner following a 72-yard punt return touchdown in pre-season. He was waived by the Chargers but caught on with the New York Jets and caught his first career pass from Sam Darnold, but also fumbled twice during his rookie season. Though smaller in stature (5’10”, 173 lbs), Jones makes up for it with his speed (clocked with a 4.35 40-time at his pro day).

Jerry Louie-McGee is a legend at the University of Montana (sharing an alma mater with current GM Brock Sunderland), where he’s the school’s all-time leader in receptions with 230 catches for 2,277 yards, earning the nickname ‘Mr. Electricity’. He had a high-volume role with the Grizzlies, catching 21 passes in a game against Cal Poly in 2016 to an FCS freshman and Big Sky Conference record. Louie-McGee was equally impressive in the return game in college, returning three punts for touchdowns while cracking the school’s top 10 all-time with 3,685 all-purpose yards.

An undrafted free agent signing of the Arizona Cardinals in 2018, Jalen Tolliver suited up for three NFL games as a rookie, making three catches for 37 yards before being released the following May. After stints with the Tennessee Titans and Kasnsas City Chiefs, along with the XFL’s Tampa Bay Vipers — where Elizondo called plays for head coach Marc Trestman — Tolliver joined Elizondo in Edmonton two months ago. Tolliver played his college ball for the Arkansas-Monticello Boll Weevils of the Great American Conference in NCAA Division II.

Khayri Denny and Earnest Edwards also come from small schools and have faced challenging odds in their professional careers to this point. Edwards, who was a special teams star with the University of Maine, attended training camp with the LA Rams as an undrafted free agent in 2020 after running a 4.41 at his Rochester pro day. Denny was productive at Rhode Island, catching 100 passes for 1,184 yards in 41 games.

Diego Viamontes might see more action in 2021 after being the first player chosen in the 2019 CFL-LFA Draft, featuring the top football players from Mexico. In 2019, Viamontes appeared in both pre-season games for Edmonton before making his CFL debut on Oct. 12 vs. BC. Three weeks later he made his first career start, returning three kickoffs and a missed field goal for a combined 69 yards but failing to catch a pass.

While Tevaun Smith and Mike Jones are the first two options, there are plenty of Canadian receivers in the mix for Edmonton, starting with the veteran Anthony Parker, who’s been in the league since 2011. With 185 receptions and 2,344 yards in his career, the 31-year-old can step onto the field and make an impact when called upon.

This might be the last chance for Danny Vandervoort to crack a CFL starting lineup. The McMaster product was the third overall pick in 2017 but couldn’t get on the field with BC, eventually signing with Edmonton in 2019. The CIS top rookie in 2013, Vandervoort ranks third all-time in U Sports history with 29 career receiving touchdowns and will try to regain the form that billed him a top prospect four years ago.

Jimmy Ralph had a career year with the Argos in 2019, catching 38 of 50 targets for 366 yards and a touchdown. Karl Hunter, Harry McMaster, Malik Richards, and Shai Ross will also battle for roster spots once camp opens up.