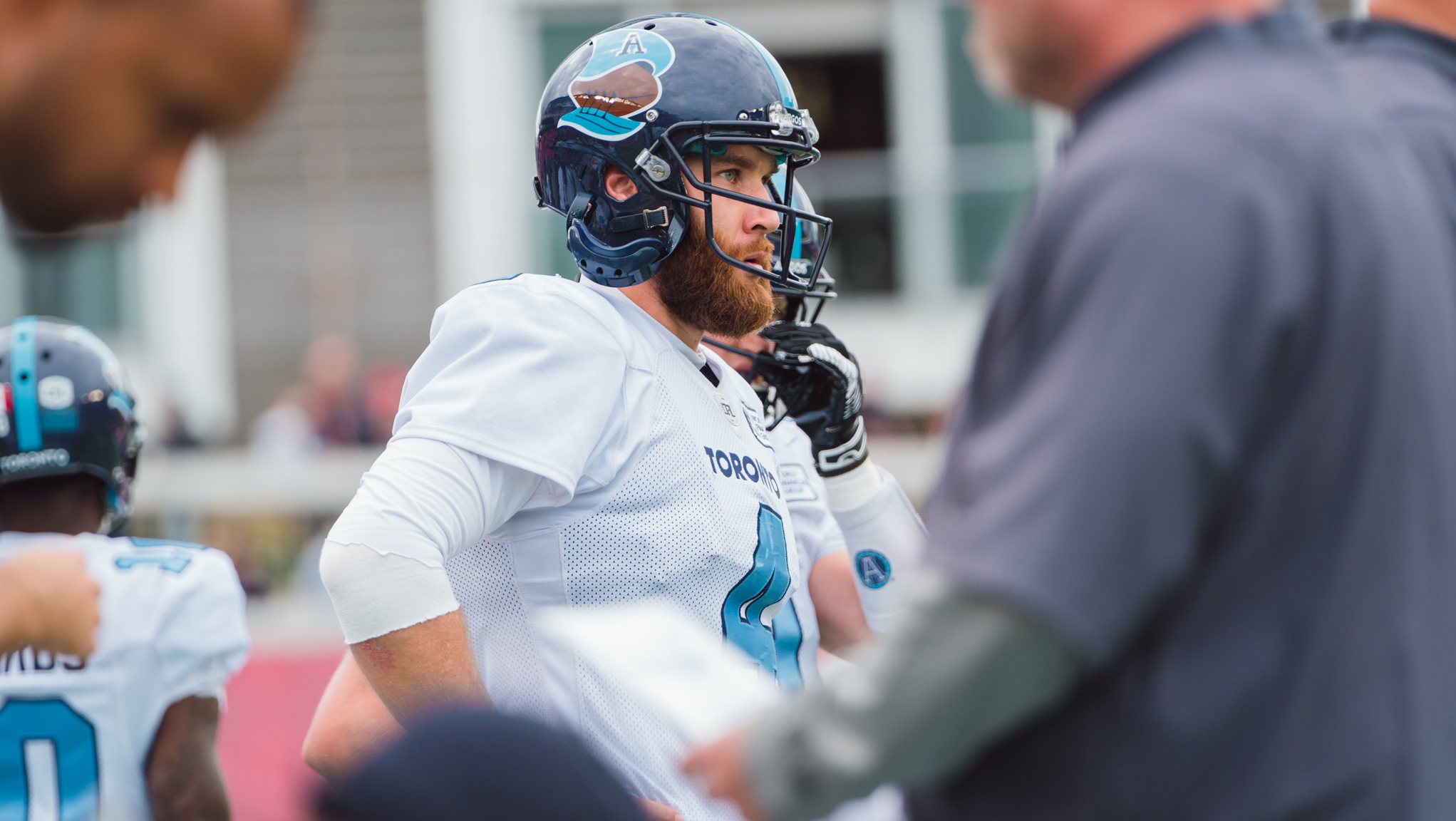 I’m writing something positive about Toronto and you can’t stop me. (Please keep reading!)

This city just saw the Maple Leafs overtake the 1985 Toronto Blue Jays for the title of greatest choke job in Toronto post-season history. I fully understand the joy the rest of the nation must have felt watching the Leafs blow a 3-1 lead to the Montreal Canadiens but it was a massive gut punch round these parts on Monday night.

With the hockey team now taking part in their annual beginning of June golf schedule, I have to say the local football team is certainly doing all they can to fill the sports void millions of people in southern Ontario find themselves in. No franchise has made more of a splash with the acquisition of so many defensive stars  (Cameron Judge, Charleston Hughes, Henoc Muamba, Cordarro Law a sneaky good Drake Nevis) plus a 1,000 yard rusher in John White and a 1,000 yard receiver in Eric Rodgers.

But I want to talk about the most fascinating and easily the most important signing: McLeod Bethel-Thompson. 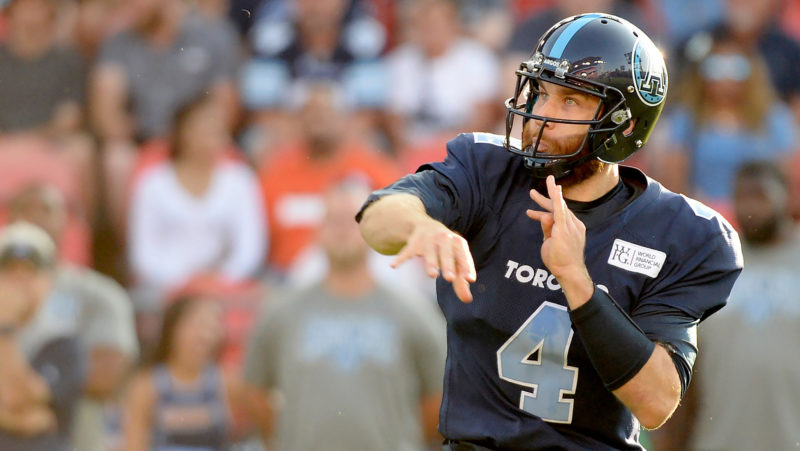 I will discuss Bethel-Thompson as a passer in a moment, but one thing we can all agree on is that the last Grey Cup taught us one valuable lesson: You need an excellent back-up quarterback if you want to win in this league. Not every team has Bo Levi Mitchell kicking around and even he got hurt in 2019.

Winnipeg opened the 2019 season with a 33-23 win over the BC Lions and the quarterback that day was Matt Nichols, who threw three touchdowns with zero interceptions. Yes, he finished with only 184 yards through the air but hey, you can do that when you got Andrew Harris in your backfield. Winnipeg’s season ended with Zach Collaros as the Grey Cup-winning starting quarterback but it was Chris Streveler who threw the only touchdown pass for Winnipeg and, of course, it was Harris who caught it.

Hamilton began the 2019 campaign with Jeremiah Masoli in their 23-17 Week 1 win over the Saskatchewan Roughriders. But it was Dane Evans who was the star for Hamilton leading to the Tabbies to the Grey Cup and a 15-3 record after Masoli torn his ACL on his left knee in a Week 7 23-15 win over Winnipeg.

So, what about Bethel-Thompson as a passer? The meat and potatoes statistics look great. In 13 starts MBT was first in touchdown passes and third in passing yards, so the production is there. The one concern I have brought up in the past was whether or not all those statistics were just empty calorie yards in blowout losses. Was McLeod a stat stuffer or not? I went back to my annual end of year, “What does this season mean” column where I pepper the lord of all things CFL statistics (And the voice for the Saskatchewan Roughriders) Derek Taylor. I asked Derek for his perspective on this issue and here is what I wrote at the time:

“Derek threw out all the yardage when Toronto trailed by three scores or more and found that Bethel-Thompson’s numbers were similar to Matt Nichols’. In the fourth quarter when his team was down by two scores or less McLeod completed 71 per cent of his passes with four touchdowns and one interception. Yes, the sample size is small but it made me realize I may have to reconsider how I view the Toronto passer.”

So maybe I need to reconsider what is the proper context for Bethel-Thompson’s on-field production. Maybe it deserves more credit than it has been given in the past.

The one thing we can all agree on is the man certainly has the flair for the dramatic.

In Week 8, during the last time we had the privilege of watching CFL football, McLeod was part of a remarkable 28-27 comeback win over the eventual Grey Cup champ Winnipeg Blue Bombers. I remember this game well as the first half on this night at BMO was a real low point. 2019 was not exactly kind to the Double Blue. The team was 0-6 and the Bombers led 20-0 at one point as the game was plagued with punts and buckets of rain that sent us all scurrying for cover.

Somehow in the second half, Bethel-Thompson and S.J. Green got in sync and they managed to whittle the lead to 27-21. On the team’s final drive, MBT drove them down 72 yards in less than two minutes, converting a third and long before finding Green for the winning score.

But what stuck out for me, beyond his play, was his mental strength and focus. You see, Toronto had just recently brought in Zach Collaros but McLeod didn’t let the new acquisition distract him from his task at hand. On a lousy rainy August night where Willie Jefferson was running wild, Bethel-Thompson kept his cool, had three touchdowns and, more importantly, zero interceptions against an opportunistic Bombers defence.

Even his Argonauts’ debut was a thriller a year earlier, in Week 8 no less, against the Ottawa REDBLACKS. Bethel-Thompson came back from a 24-point deficit with the winning touchdown pass coming with one second left on the clock, a touchdown to Armanti Edwards.

Clearly Toronto has a quality back-up quarterback on their roster, but what about Bethel-Thompson as a starter? If Dane Evans versus Jeremiah Masoli is the Ontario heavyweight quarterback competition then clearly Bethel-Thompson/Nick Arbuckle is a solid undercard. There is only one problem with this fight; I have no idea who to root for. All great boxing matches have a perceived hero and villain. We all have a rooting interest not just for our guy but we also want the other fighter to go down, and go down hard. That is not the case here.

I interviewed Arbuckle on my radio show and his football story is a fascinating one. He starred on the offensive line until switching to quarterback at Grade 8. Not many football players go from protecting quarterbacks to being one. He put up video game numbers during his Georgia State days and as a senior made all-Sun Belt Conference. His lowest professional moment came in 2018 when he was cut by the Lions during minicamp. At the time he was earning $600 cleaning pools while his wife worked three jobs and the couple didn’t even have a car.

So basically, before Calgary came around Nick was a country music song, if you replace farming with throwing.

What sort of heartless, soulless individual would root against that story?

Well, maybe the person cheering for the guy who has been cut 11 times since leaving college. The man is running out of his football nine lives as he’s played for both Saber Cats (The San Jose franchise Arena Football League franchise) and the Mountain Lions (The Sacramento franchise for the United Football League). Yeah, I’m not proud of that joke either.

McLeod was last seen playing for something called The Spring League last year to keep himself sharp for just this opportunity. While you may be able to poke holes in his ability as an elite passer, no one doubts that Bethel-Thompson will always put in the work, no matter where the work is to give himself the best chance to be a starter in this league.

Whether it is Arbuckle or Thompson, the final result will be a feel-good story about a player who preserved and got what they deserved. Kind of the opposite of what we saw from the local hockey team.