REGINA — Coming off a 13-5 season and their highest win total since 1970, the Saskatchewan Roughriders had no reason to overhaul the roster that won them their first West Division title in a decade.

Now, nearly 20 months and two off-seasons after a global pandemic put all plans on pause, the Riders are primed to re-enter what many considered to be a highly promising competitive window that should see them contend for the Grey Cup annually.

Led by 2019 Most Outstanding Player runner up Cody Fajardo at quarterback, along with a complement of stars in Shaq Evans, Kyran Moore, and William Powell, Saskatchewan’s offence is poised to take the next steps in 2021 after leading the league in team passing efficiency (101.6), completion percentage (71.5%), and rushing touchdowns (26) two years ago. 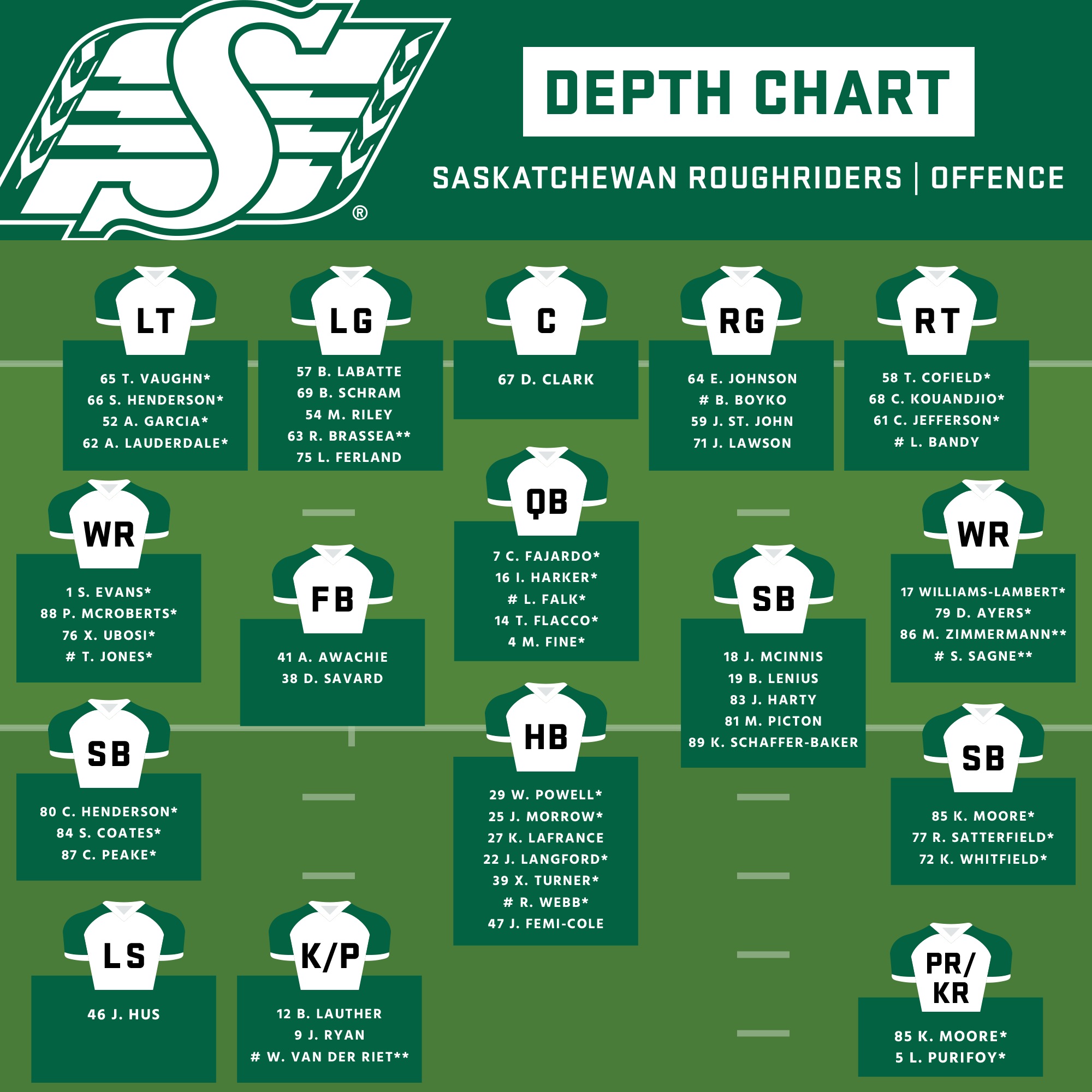 The Riders are led by one of the CFL’s best up-and-coming passers in Fajardo, whose first season as a professional starting quarterback could not have gone better. Fajardo led the league with 4,302 passing yards to go with an 18:8 touchdown to interception ratio and 105.2 rating. His 9.1 yards per attempt put him firmly in elite territory as a passer, but the 29-year-old was equally dangerous as a runner, scoring 10 times and adding 611 rushing yards on 107 carries.

Fajardo was aided by the league’s second most balanced attack. Led by veteran running back William Powell, whose 12 touchdowns led all running backs, the Riders ran the ball 40 per cent of the time, second only to Grey Cup Champion Winning (44%). Powell, 33, is expected to be the bell cow back once again this season, with returning veteran Jamal Morrow and former fourth round NFL draft pick Jeremy Langford competing to be the primary backup.

Despite losing three key pieces up front in Philip Blake, Dariusz Bladek, and Dakoda Shepley, there’s a good chance the Riders will push around their opponents once again in 2021. Marquee free agent signing and Saskatchewan native Evan Johnson joins centre Dan Clark and six-time CFL All-Star Brendon LaBatte on the interior, along with some impressive depth behind them in Brett Boyko, Braden Schram, and Josiah St. John in case of injury.

The Riders project to start two Americans at offensive tackle, where competition for both spots could get heated. Terran Vaughn had a breakout season in 2019 and should hold down the left side of the line, but nothing is guaranteed. Takoby Cofield returns, while former Buffalo Bills draft picks Cyrus Kouandjio and Seantrel Henderson are just two newcomers to watch as the Riders have loaded up on talent at the position. Former New England Patriots third round pick Antonio Garcia is also one to keep an eye on.

At receiver, Shaq Evans returns after leading the CFL in yards per catch (18.5) and 30-plus yard catches (15) in 2019. He’s joined by diminutive speedster Kyran Moore, who will look for his first career 1,000-yard season as one of Fajardo’s top options. While recent draft picks Justin McInnis and Brayden Lenius are likely competing for one spot, along with Jake Harty who hasn’t played since 2017 due to two separate knee surgeries, there are a couple of job openings at receiver following the departures of Naaman Roosevelt and Emmanuel Arceneaux.

Veteran Jordan Williams-Lambert, still just 27 years old, has the inside edge on one of those spots despite struggling to replicate his impressive 2018 rookie season that saw him contribute 764 yards and four touchdowns (in fairness, he arrived late in the year in 2019). But there are several talented players vying for two open positions, including a pair of former third round NFL draft picks in Carlos Henderson and Sammie Coates. With his 6-foot-2 frame and a college 40-time of 4.43, Coates is one of the more intriguing stories at camp entering 2021.

As good as the Riders’ offence was in 2019, the defence was even better, allowing a CFL low 294.4 yards per game, including top-two finishes in passing yards (228.8) and rushing yards (92.6) per game. Repeating that success won’t be easy following the departure of four key starters in Cameron Judge, Solomon Elimimian, Derrick Moncrief, and Charleston Hughes. 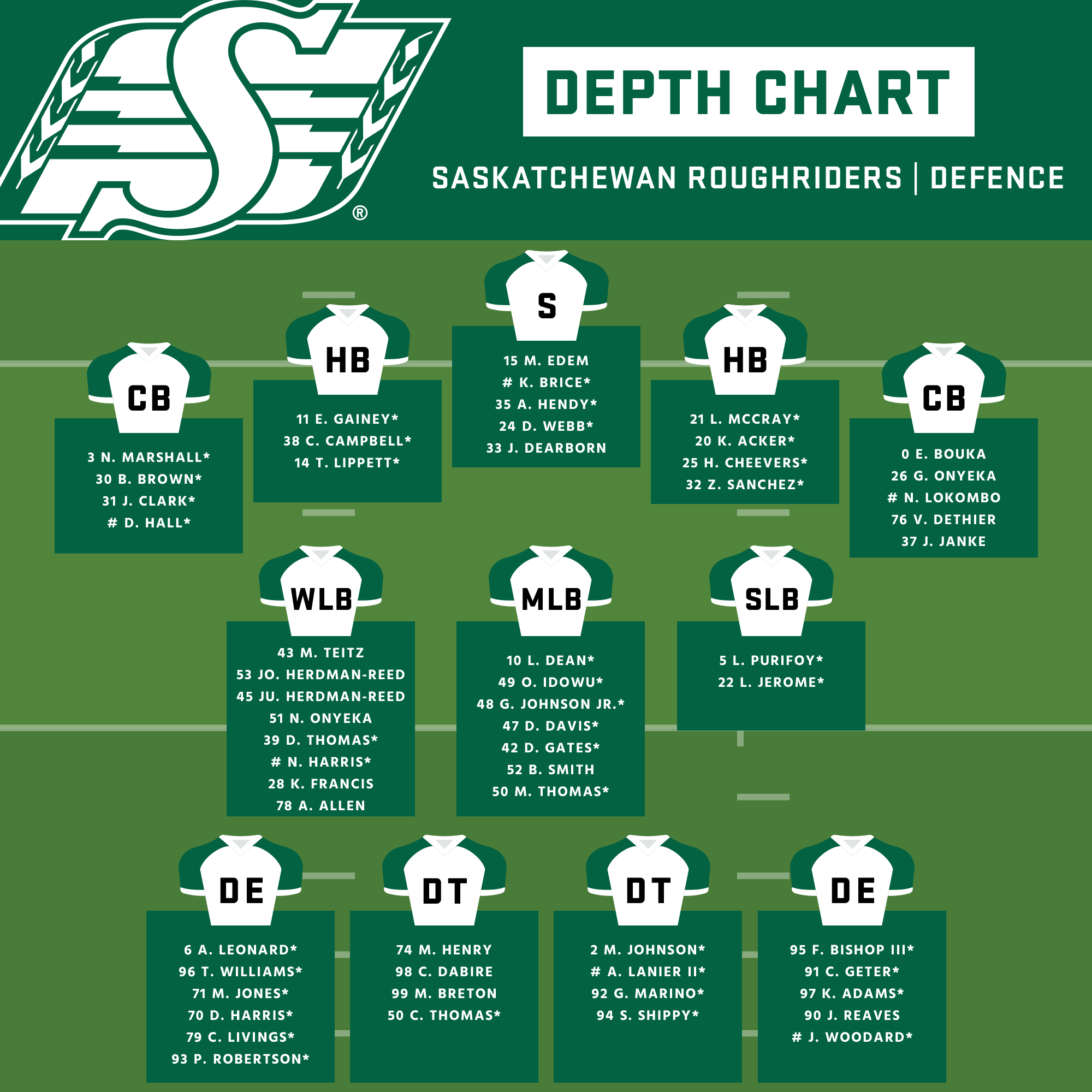 Second-year defensive coordinator Jason Shivers will have plenty of flexibility when it comes to the ratio. With Mike Edem all but locked in at safety, the Riders could start a second Canadian in the secondary as Elie Bouka, Godfrey Onyeka, and 2021 draft pick Nelson Lokombo are all candidates to start at field corner (all three were highly-touted prospects before being drafted). That would allow Loucheiz Purifoy to fill an opening at SAM, with L.J. McCray starting at halfback. Ed Gainey and Nick Marshall are locks on the boundary side, while Lorenzo Jerome is also a candidate to start, especially at SAM if Purifoy plays halfback.

The Riders are well equipped to start a Canadian at linebacker, with former 14th overall pick Micah Teitz vying for a starting job with brothers and free agent signings Jordan and Justin Herdman-Reed, along with Nakas Onyeka and Blair Smith. That type of depth would indicate plans to start a Canadian at the WILL linebacker spot beside star free agent signing Larry Dean in the middle — but the added ratio flexibility means an American could start.

If the Riders do go American at the WILL linebacker position, returning veteran Oluwaseun Idowu would lead a long list of candidates for the job. Idowu had 15 tackles and a sack during his rookie season in 2019. The linebacker position might bring one of the most contentious battles of Riders training camp, and the added flexibility with the ratio means going with the best player at the position, regardless of passport.

Up front, the return of Micah Johnson is big news after nearly losing him. Johnson had agreed to play for the Lions before the cancelled 2020 season, then returned to free agency in 2021 and signed with the Riders. Johnson is widely considered one of the best interior linemen in the CFL, with 45 sacks in 96 games along with six forced fumbles. He’ll likely spend most of his time beside Makana Henry and Charbel Dabire in the middle.

General Manager Jeremy O’Day turned to veteran pass rusher Freddie Bishop III in order to try and replace Charleston Hughes. Even though Hughes will be 38 in December, he won’t be easy to replace, having recorded 31 sacks over the last two seasons for Saskatchewan. The Riders will likely lean on a rotation of Bishop III, Chad Geter, and A.C. Leonard to try and get to the quarterback, or perhaps one of several new training camp hopefuls will emerge.

On specials, the kicking game is in good hands with the tandem of Brett Lauther and Jon Ryan. Lauther has earned his reputation as a clutch kicker, while Ryan led the CFL with an average punt of 48.8 yards. It’s worth mentioning he also led the league with 12 singles, but his strong leg could easily swing field position in the Riders’ favour. Kyran Moore and Loucheiz Purifoy are de facto returners for now, though the Riders may search for a new return specialist in camp considering both Moore and Purifoy have important responsibilities on offence and defence respectively.