OTTAWA — New leadership means an exciting new outlook for the Ottawa REDBLACKS, who hope to put a forgettable 2019 season behind them.

With the help of new head coach Paul LaPolice and quarterback Matt Nichols — both coming off a Grey Cup victory with the Winnipeg Blue Bombers — the REDBLACKS hope to resemble less of the three-win team of two years ago, and more of the club that reached three out of four Grey Cups from 2015 to 2018 under reigning general manager Marcel Desjardins.

Desjardins has been busy during the pandemic that wiped out the 2020 season and delayed the 2021 campaign until Aug. 5, bolstering his Canadian talent with the additions of defensive tackle Cleyon Laing and receivers Daniel Petermann and Anthony Coombs. Other experienced veterans added to the roster since 2019 include running back Timothy Flanders, SAM linebacker Don Unamba, defensive tackle Davon Coleman, linebacker Micah Awe, and defensive end Frank Beltre.

In the end, Ottawa needs better from an offence that ranked last in the CFL in 2019 with 15.8 points and 293.0 yards per game — starting with the quarterback position, where the team lacked experience and productivity the last time it took the field.

RELATED
» Ready for Kickoff: Previewing the 2021 CFL season
» A look at every team’s Off-Season Depth Chart
» Landry’s 5 takeaways from the schedule release 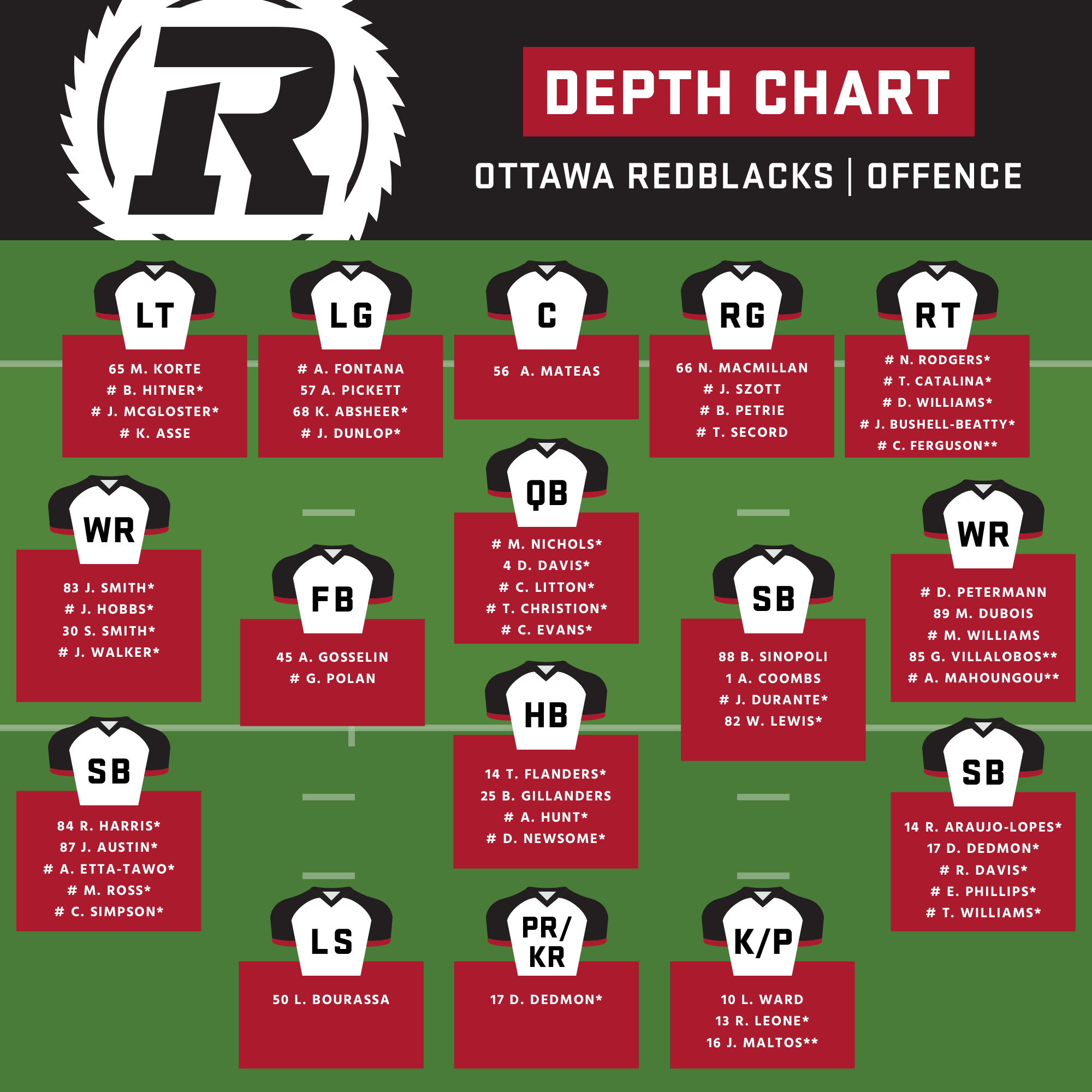 A year ago Ottawa’s quarterback depth chart was topped by Nick Arbuckle, who left the REDBLACKS for the rival Argos before ever suiting up. Nichols may not have the same pizazz or exciting upside of an Arbuckle, but is likely the safer option for a team seeking experience and consistency at the position. The 34-year-old has 108 touchdowns to just 60 interceptions in his career, and was the CFL’s top-rated pivot (107.2 rating) before suffering a season-ending injury in 2019.

Nichols will see a couple of familiar faces when the REDBLACKS return to the office in August, as his offensive coordinator in Winnipeg is now his head coach in Paul LaPolice. The duo is also joined by national receiver Daniel Petermann, who has the chance to move out of Drew Wolitarsky‘s shadow in Winnipeg and into a starting role in the nation’s capital.

Reluctantly embracing the ‘game manager’ role in Winnipeg (tongue firmly in cheek), Nichols was like a point guard on turf in Winnipeg, distributing the football evenly while avoiding the game-altering mistake (and what quarterback wouldn’t take pride in taking care of the football?). The question then becomes whether or not the REDBLACKS have the playmakers to do damage in the suddenly contentious East.

Brad Sinopoli saw his streak of four consecutive 1,000-yard seasons snapped in 2019, but the former Ottawa Gee-Gee is a strong bounce back candidate and should lead his team in receiving in 2021. RJ Harris could also do much of the heavy lifting for Ottawa after a strong sophomore season, catching 62 of 94 targets for 774 yards in 14 games. However, in the absence of Dominque Rhymes, who departed to BC as a free agent, someone else must step up.

Free agent signing Jalen Saunders  — who averaged a whopping 76.2 receiving yards per game in his two years with Hamilton — was expected to round out Ottawa’s top three, but announced his retirement in June. That means returning sophomores Jerminic Smith and Rafael Araujo-Lopes have the edge over a long list of first-year receivers that will show up at REDBLACKS camp in July, along with electrifying return man DeVonte Dedmon.

Versatile running back/returner Anthony Coombs is another name to watch in training camp, and could fill a role similar to Nic Demski in Winnipeg. Both former Manitoba Bisons have a unique set of abilities both catching the football and creating offence in space. While Demski was a key part of the Bombers’ Grey Cup winning offence, Coombs has struggled to stay healthy, averaging 11.5 games per season since being drafted third overall.

While Coombs could also see time at running back, along with another Canadian in Brendan Gillanders, the lead back role is likely reserved for an American. Timothy Flanders played under LaPolice in Winnipeg and could be the favourite, but 28-year-old Akeem Hunt, who ran a 4.38 out of Purdue, has the talent to be a star. Detrez Newsome is also a name to watch as the team looks to replace Mossis Madu and John Crockett, both currently unsigned.

After featuring five Canadian starters throughout much of 2019, one tackle position will likely go to an American in 2021 following the departure of Jason Lauzon-Séguin to Montreal. Centre Alex Mateas and guard Nolan MacMillan are locks to start, along with third-year tackle and former fourth overall pick Mark Korte, leaving two spots up for grabs in what’s expected to be a highly competitive camp.

Lewis Ward and Richie Leone form arguably the league’s best kicker-punter tandem, while Louis-Philippe Bourassa handles long snapping duties. In the return game, Dedmon had a breakout season in only five games’ work with one punt return touchdown and another on kickoffs, and could be one of the CFL’s best over a 14-game season in 2021. 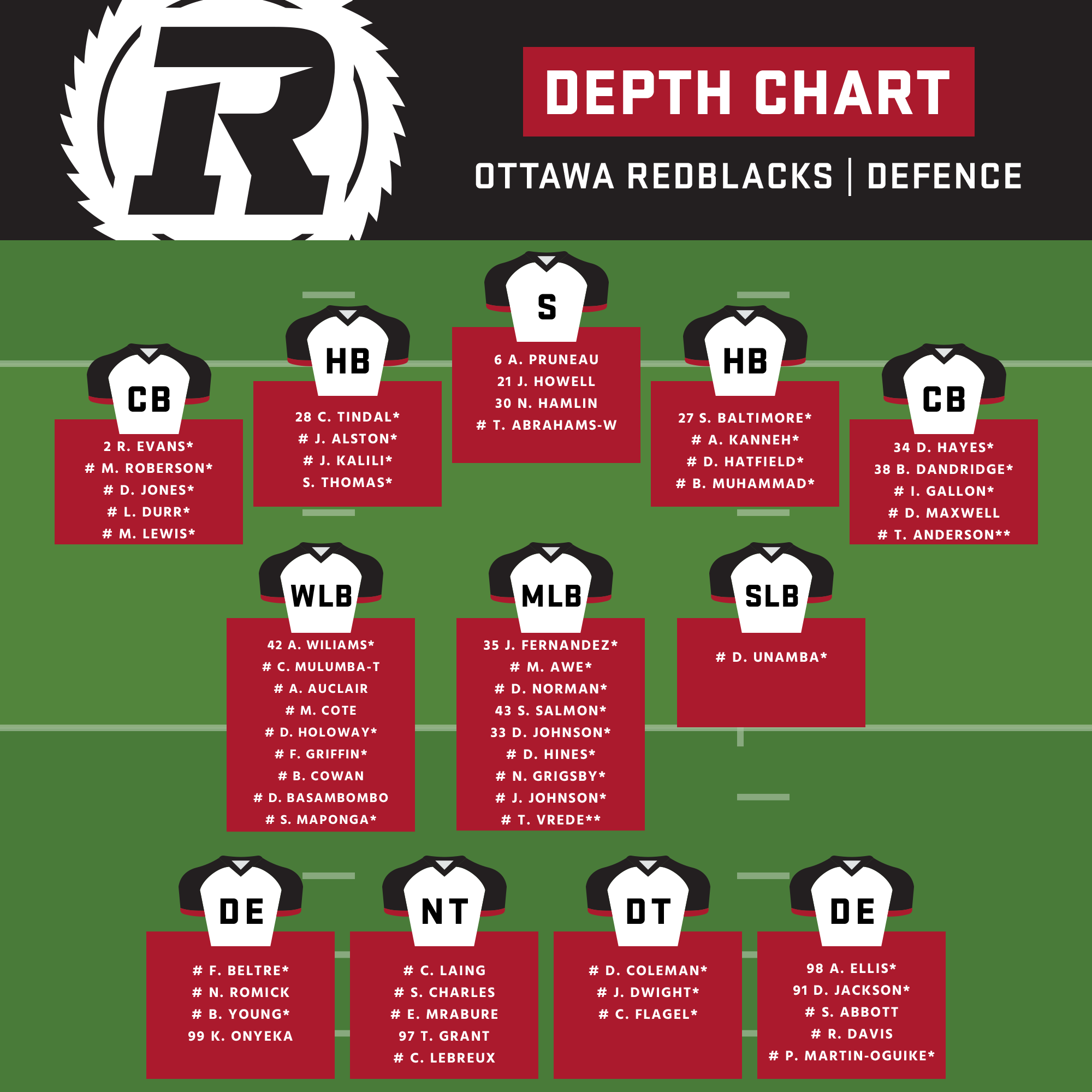 The defence was also a pain point for the REDBLACKS in 2019, ranking last in the CFL in several categories including yards per game (415.4) and total points per game (31.3). They not only gave up yards but also struggled to be disruptive, ranking dead last in interceptions (12) and second last in sacks (28). That must change if Ottawa is going to squeeze back into a busy playoff picture featuring two legitimate contenders in Hamilton and Montreal.

This unit could surprise in 2021, led by a veteran defensive coordinator in Mike Benevides who previously had success during stops in Edmonton and BC. It’s a talented defence on paper, starting on the defensive line where marquee free agent signing Cleyon Laing, who happens to come with a Canadian passport, brings a history of production on the interior. Laing has 33 sacks in 89 career games, including four seasons of five or more sacks. The combination of Laing and follow free agent addition Davon Coleman might be better than any the REDBLACKS have had in recent years (Laing had a brief stint with Ottawa in 2016 after spending time in the NFL that year).

The additions of Ese Mrabure and longtime NFL lineman Stefan Charles give Ottawa a solid rotation on the interior, while the returning Avery Ellis along with free agent acquisition Frank Beltre are projected to start on the edge following the retirement of Danny Mason. Additionally, Darius Jackson made his debut in 2019 with a sack in five games, while Bryson Young and Prince Martin-Oguike will try to make themselves known in camp. Nationals Nigel Romick and Kene Onyeka round out the group.

The REDBLACKS were able to generate 20 sacks off the edge in 2019, accounting for the majority of their 28 sacks. They’ll need more pressure from other spots in 2021, and the addition of Don Unamba as SAM linebacker could help. Unamba is good in coverage but is also an effective blitzer, coming off a career-high six sacks in 2019. Middle linebacker Jerod Fernandez was Ottawa’s Most Outstanding Rookie in 2019 with 53 tackles and two forced fumbles in 11 games, while Avery Williams is the projected starter at WILL. Veteran free agent signing Micah Awe provides depth, while 2020 sixth overall pick Adam Auclair is one of the team’s most exciting young prospects and could figure in at WILL at some point. Ottawa is well equipped to go with a Canadian at the position with several other options including Christophe Mulumba-Tshimanga.

Despite losing Jonathan Rose via free agency (Edmonton), the REDBLACKS have several familiar, veteran names in their secondary, led by one of the best safeties in the league in Antoine Pruneau. The 31-year-old was plagued by injuries in 2019, but the original Ottawa REDBLACK (playing all 18 games in the expansion 2014 season) sets the tone on defence with 321 career tackles. Sherrod Baltimore, Corey Tindal, and Randall Evans are likely locked into starting roles, with De’Chavon ‘Gump’ Hayes, Brandin Dandridge, Abdul Kanneh, and Marcus Roberson all capable of starting. It’s a deep and competitive group entering training camp.