Picking Up Where They Left Off: Als eyeing top of the East

Picking Up Where They Left Off: Als eyeing top of the East

MONTREAL — It was a landmark year for the Montreal Alouettes in 2019 as they debuted new uniforms, found a new franchise quarterback, and captivated a city while earning their first playoff berth since 2014.

Now, following a cancelled 2020 campaign due to the Covid-19 pandemic, the Alouettes try to pick up where they left off and continue their surge atop the suddenly hotly contested CFL East Division.

Vernon Adams Jr. — the 28-year-old quarterback who inspired his team with stunning comebacks, late-game heroics, and tantalizing athletic ability — leads a long list of reasons to be excited about football again in La Belle Province. There’s also Khari Jones, the former Most Outstanding Player hired to be head coach just days before the 2019 season, and budding young playmakers such as running back William Stanback and receiver Eugene Lewis.

If the Alouettes can improve defensively under first-year coordinator Barron Miles (the team allowed 316.1 passing yards per game in 2019, the worst in the CFL), there’s no reason they wouldn’t compete for a Grey Cup. In the end, though, it’s one of the league’s most electrifying and unpredictable offences that everyone will be watching when the team takes the field on Aug. 14 in Edmonton. 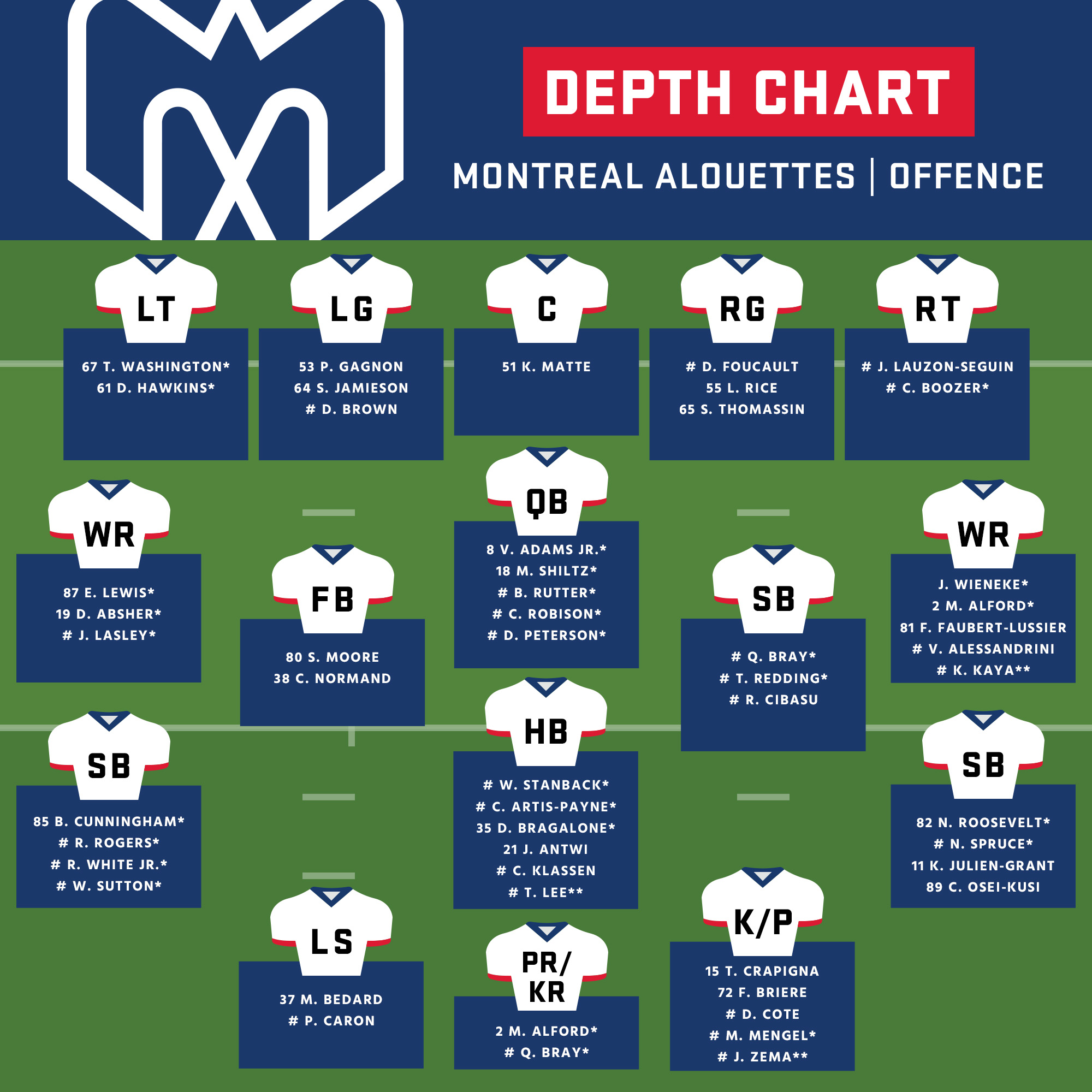 As an offence there’s room to grow in Montreal, after the unit ranked second in the league in scoring (24.9 points per game) and fourth in the league in net yards (365.7 per game), but on paper this unit poses significant problems for opposing defences as long as Adams Jr. is healthy.

The O-line quietly thrived in 2019, allowing just 39 sacks compared to the 66 allowed in 2018 (by far the worst in the CFL). A lot has changed in a year and a half though, as Tyler Johnstone, Spencer Wilson, Chris Schleuger, and Trey Rutherford are out, while a trio of local talents in Philippe Gagnon, David Foucault, and Jason Lauzon-Seguin are in. Lauzon-Seguin, a seventh overall pick in 2016 and an East Division All-Star a year later, is expected to start at right tackle, while American Tony Washington projects as the starting left tackle.

With only three American offensive linemen on the roster, it’s almost a given the team will start four Canadians up front in 2021. Such ratio flexibility could pay off with an all-American pass-catching corps. Lewis emerged as a true No. 1 in 2019 and could contend for a receiving yards title this year, while Quan Bray and Jake Wieneke are poised to break out as sophomores. Veterans B.J. Cunningham and Naaman Roosevelt may be pushed for their starting roles in camp, with Dante Absher and former NFL draft pick Eli Rogers waiting in the wings.

If the Alouettes don’t start five Americans at receiver, there could be competition from 2019 Alouette draft picks Kaion Julien-Grant and Chris Osei-Kusi, picked in the second and fourth round respectively, for a starting role. Either way, quarterback Adams Jr. will enjoy throwing to one of the CFL’s most dynamic and diverse groups of receivers in 2021.

Speaking of the backfield, there is no debate that Adams Jr. and Stanback will be the starters when healthy. Both are elite at their respective positions, including Adams who was just as dynamic through the air in 2019 (100.9 quarterback rating, 24 touchdowns) as he was on the ground (394 yards, 12 touchdowns). His 36 combined touchdowns led the league by a wide margin, and his ability to improvise makes Montreal’s offence a tough out, especially late in close games.

Stanback is equally dynamic, having led the CFL with 6.2 yards per carry and a CFL-best 12 rushes of 20-plus yards in 2019. Led by Stanback and Adams Jr., and spelled by the departed Jeremiah Johnson, the Alouettes had the CFL’s second best rushing attack, averaging 124.2 yards per game and 5.7 yards per rush. Only Grey Cup winner Winnipeg was better. Americans Dominick Bragalone and former Auburn and NFL running back Cameron Artis-Payne will compete for a spot behind Stanback, along with nationals Colton Klassen and Jeshrun Antwi, and global Taku Lee.

On special teams, the loss of Boris Bede could hurt the Alouettes. His big leg on kickoffs often pinned opponents deep, and on field goals the Als’ team rate of 88.6 per cent was second best in the CFL. Tyler Crapigna will compete with Felix Briere along with three other kickers on the roster. Having a full season of Mario Alford returning kicks could pay dividends, however. Alford returned two of his nine punt returns for touchdowns during the regular season, adding a kickoff return touchdown in the playoffs — after the Als had a revolving door at the position throughout most of the season. 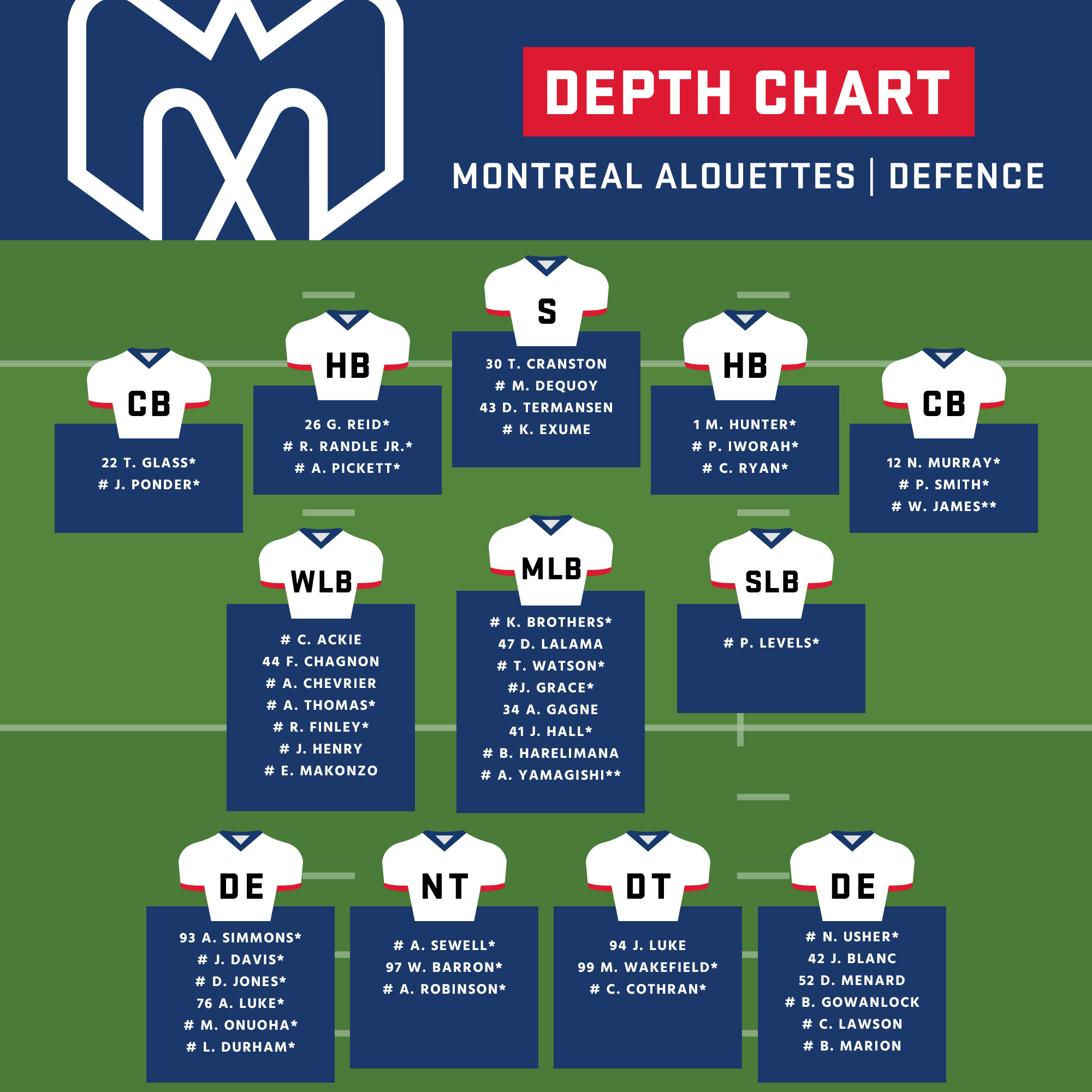 There’s no arguing the Alouettes’ Achilles Heel in 2019 was their pass rush, which failed to generate any consistent pressure. That showed up in the Eastern Semi-Final, when Edmonton pivot Trevor Harris completed 36 of his 39 passing attempts (a playoff record of 92.3%) as the Elks scored 37 points to eliminate Montreal. This was a common theme for the 2019 Alouettes, who ranked last in the CFL in sacks (27) and pass knockdowns (38) and allowed opposing quarterbacks to complete a CFL-high 73.6 per cent of their passes.

Adding six-time CFL All-Star Almondo Sewell to the interior should help. The 34-year-old is joined by Woody Barron and other free agent additions in Michael Wakefield and hometown product Junior Luke, giving Montreal a proven quartet of defensive tackles. Free agent signing Nick Usher could also provide more pressure off the edge, coming off a breakout season with six sacks in Edmonton. Usher and Antonio Simmons are the projected starters at defensive end, though the current roster indicates a national could occupy one of those two spots, with J. S. Blanc and David Menard in the mix.

The Alouettes’ ability to get to the quarterback might improve with Miles calling the shots on defence. He’s a first-time coordinator with a long CFL resume, including 10 years as a coach and 12 as a player. Longtime NFL coach Bob Slowik was the Alouettes’ defensive coordinator in 2019, but he came to the league with no experience in the three-down game.

There are questions at linebacker for the Alouettes, especially in the middle where Henoc Muamba leaves a hole after joining the rival Argonauts. The Als have loaded up on Americans at the position, with several names in the mix including former Minnesota Vikings linebacker Kentrell Brothers. Brothers played 51 games in the NFL, combining for 55 tackles and one sack in four seasons. Jermaine Grace from the University of Miami and Tre Watson out of Maryland are other names worth watching, while national DJ Lalama — primarily a special teamer throughout his career — had a 10-tackle game near the end of 2019 and would provide ratio flexibility. Expect a competitive camp at the position to be sure.

Chris Ackie is a ratio-breaker at the WILL linebacker position, though the versatile defender could also spend time at safety, where Ty Cranston and 2020 14th overall pick Marc-Antoine Dequoy are both options to start. Dominique Termansen and special teams coverage ace Kerfalla Exume round out the depth chart at a position that remains a question mark in the absence of Bo Lokombo and Taylor Loffler. Najee Murray and Greg Reid are returning starters in the Alouettes’ secondary, while Tyquwan Glass and Money Hunter arrive as free agents from Edmonton. Finally, just when it seemed like Patrick Levels was out of the equation, the outstanding SAM linebacker returned to Montreal as a free agent following the cancelled 2020 season.

With the ability to start a Canadian at several positions on both sides of the ball, ratio flexibility is a strength for the Alouettes in 2021 despite losing a couple of big name nationals. The more options the better for sophomore head coach Khari Jones.