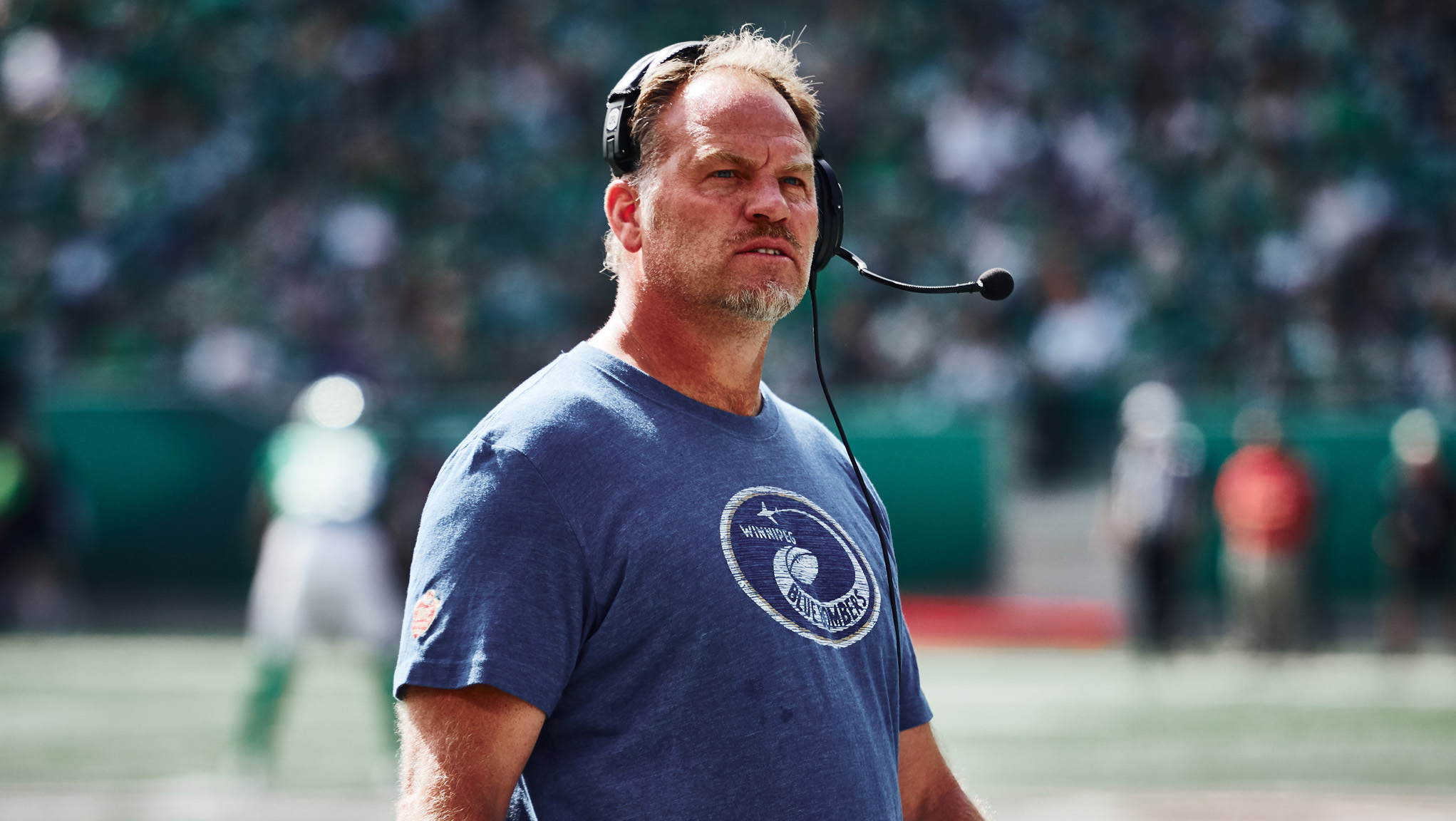 After spending time in Winnipeg, Glen Young is taking over as the Argos defensive coordinator (Arthur Ward/CFL.ca)

Veterans, veterans everywhere, as far as the eye can see.

That’s the story of the Toronto Argonauts defence in 2021, with a boatload of experienced players topping the depth chart at every position.

There is one very important rookie in the bunch, so to speak. Glen Young, the former Argos linebacker – he played with Montreal and Edmonton as well, and with San Diego in the NFL – steps into the defensive coordinator’s job, and it will be his first chance to do that at the professional football level.

After spending the last four seasons as an assistant with the Blue Bombers (linebackers, defensive line), the native of Scarborough, Ontario gets to put his personal stamp on what the Argos’ D will look like in 2021.

Young will be concocting the schemes for a whole whack of vets who haven’t played together much if at all, previously, with a vast array of new faces to Toronto coming in through trades and free agency, with just a few notable returning holdovers from Toronto’s forgettable campaign in 2019.

Up front, the face of the Argos pass rush will be that of 37-year-old Charleston Hughes, the hall of fame-bound former Roughrider and Stampeder, who brings along a resume that includes 130 career sacks. He recently tweeted that he had “tunnel vision” when it comes to the all-time record for career sacks (Grover Covington, 157), so you know he is motivated. The questions are: how much does he have left in the tank? How has a year without playing affected him?

You can ask the same questions about another veteran rusher, 36-year-old Odell Willis (101 career sacks), who signed a free agent contract in February.

Former Stampeder Cordarro Law is now an Argo, arriving in a trade days before he was scheduled to hit the free agent market. He’s 32, and scored 10 sacks, 51 tackles and a forced fumble in his last year as a Stampeder.

The interior of the Argos’ D-line suffered a big blow in free agency when Cleyon Laing opted to join the Ottawa REDBLACKS in 2020, so the team needs someone to step up and dominate the inside in order to allow the edge rushers to do their thing.

Drake Nevis fits the bill. After four outstanding seasons – first in Hamilton and then in Winnipeg – the 32-year-old brings his gap-dominating skills to Toronto, originally signing with the Boatmen in 2020. Beside him, Jhaustin Thomas just may be the guy. Arriving in Toronto in 2019, he opened eyes with his play at both the tackle and rush positions. Canadian Fabion Foote should not be ruled out as a starter after three emergent seasons in Montreal.

Beyond the veterans listed, the Argos have some interesting possibilities with a couple of former NFL defensive linemen under contract. Just what do they have in Kony Ealy and Eli Harold?

Ealy spent the first three of his five NFL seasons with the Carolina Panthers, and had a monstrous game in the 2016 Super Bowl with three sacks, a forced fumble and an interception. Harold spent four seasons in the NFL as a linebacker, but the 27-year-old may be well-suited to rushing off the edge in the CFL.

Behind the line, the Argos are set at two of the three linebacker positions, having signed both the 2019 Most Outstanding Canadian and the runner-up, as free agents. Two-time CFL all-star Henoc Muamba is the expected starter in the middle, while the man he bested for the top Canadian award, Cameron Judge, is also a veritable lock to be Toronto’s starting weakside linebacker. With those two 2019 CFL All-Stars in double blue, the Argonauts boast a dynamic duo of homebrew linebacking punch.

Behind Muamba and Judge, veteran Canadian linebacker Nick Shortill provides depth; he proved he was more than a special teamer when he filled in for a suspended Simoni Lawrence at the weakside linebacker position, for Hamilton, during the 2019 season. Rookie Canadian linebacker Jack Cassar – a star at Carleton University and an all-Canadian in his final season with the Ravens – is a promising one.

So where does that leave Bear Woods? The 34-year-old, two-time CFL All-Star is not a Canadian but the two projected starters at the positions he’s best suited for are. However, if the year off has replenished him, rather than rusted him, he could make the final linebacking decision a tricky one.

Or, consider this: If the Argos were to actually start eight Canadians (and they have the type of homegrown depth to think about that), they could have extra flexibility to shuttle Woods in for either Muamba or Judge at their leisure. The team might have another reason to consider that kind of ratio option and that is the presence of 27-year-old Atlanta native Jordan Moore, who almost certainly had the inside track as a starter before the Argos signed Muamba and Judge.

At SAM – the critical DB/linebacker hybrid position for all CFL teams – the Argos have veteran options galore; Chris Edwards was signed to a contract earlier this month, and the 28-year-old is coming off a very good season in 2019, when he was the starter at the position for the BC Lions, amassing 50 tackles, an interception, and a couple of forced fumbles.

Shaq Richardson played very well as a SAM for the Calgary Stampeders back in 2017, and Crezdon Butler saw work at the position with Saskatchewan, during his first two years in the CFL.

Alden Darby played most of the first half of the 2019 season at SAM, for Toronto, and did it pretty well. It’s just that when he was shifted to safety at about the midway point of that campaign, he looked even better, and is the top candidate to get the nod at rover once again.

Butler and Richardson have also seen time at both corner and half during their CFL careers. In fact, when Richardson returned to the CFL, signing a contract with Toronto during the late stages of 2019, the Argos started him at corner as the team limped home with a 4-14 record. 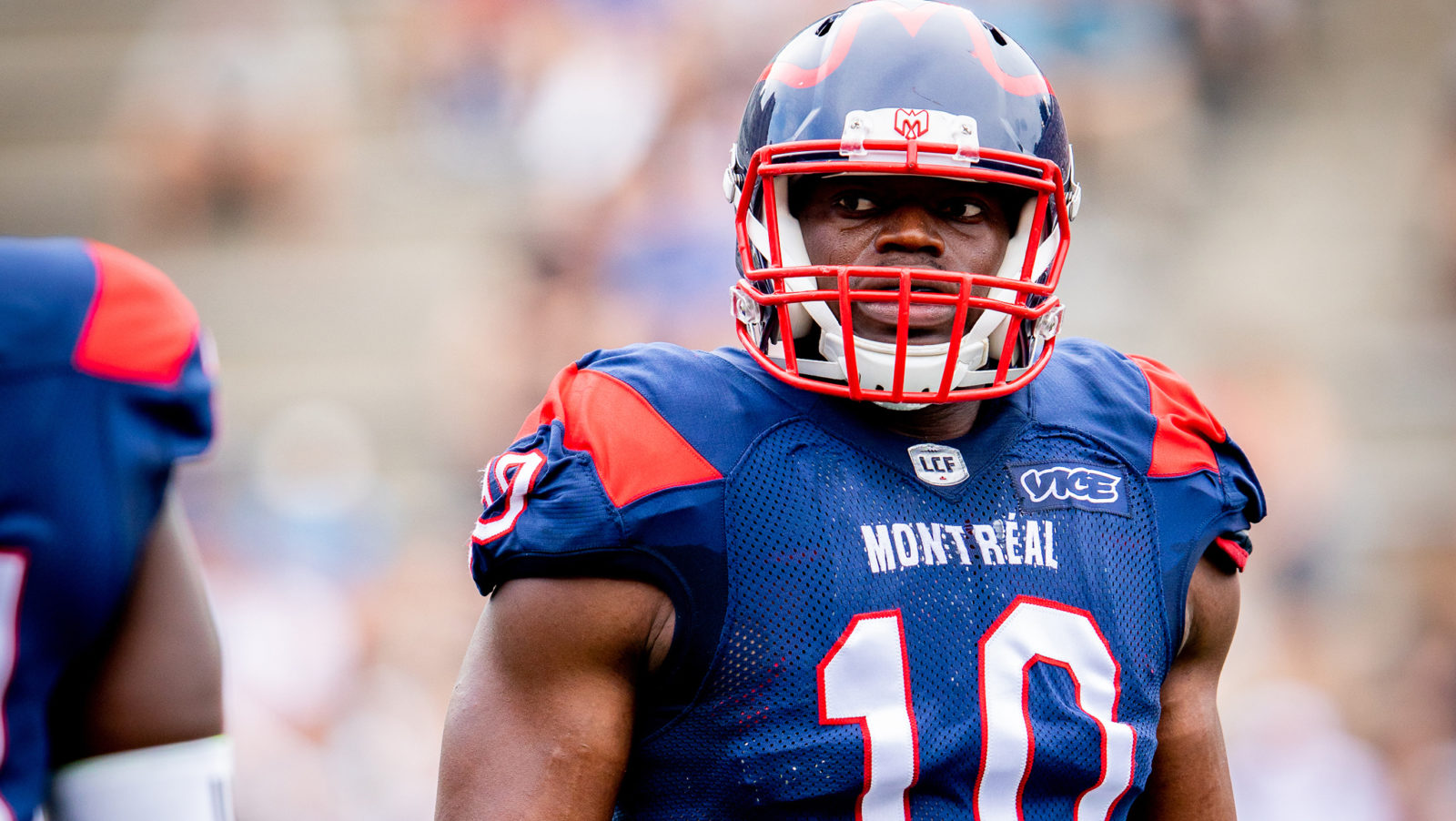 Richardson, though, had a terrific trio of games, hauling back an 89-yard pick-six against Hamilton during the final game of the season. He has expressed, in the past, a preference for playing halfback, though. “That’s the money position,” he told me in 2017. “You get a lot of action there.”

Butler joined the BC Lions early during the 2019 season and played corner for most of the rest of the year, shifting to half for the final two games of the season.

And there are even more veteran defensive backs heading for training camp. Former Ottawa REDBLACK Jeff Richards is under contract and the last time we saw him play in the CFL, he was picking off Calgary’s Bo Levi Mitchell in the 2016 Grey Cup game, and doing it from the safety position.

Former Stampeder Robertson Daniel arrived in the deal that brought the Argos the rights to Law and receiver Eric Rogers. Daniel had three interceptions in his first six games, in 2019.

Arjen Colquhoun, a free agent signing after spending the first three years of his CFL career in Edmonton, comes in as a ratio-breaking Canadian who will have every chance to lock down one of the corner positions. The Argos have some Canadian insurance behind him in Matt Boateng and Robert Woodson.

With a raft of veterans who have experience all over the secondary, the Argonauts do seem to have plenty of flexibility on the back end. If you’re looking for the name of a defensive back candidate that’s not so well-known, but who might make some noise at camp, try Chris Humes. After two seasons of very little game action with Winnipeg, the 26-year-old from Alabama could be ready to make a jump.

At almost every team’s training camp, almost every year, a new face and name stakes a claim, some on the road to becoming CFL stars. It’s not to say that won’t happen with the 2021 Argonauts defence. But, with so many well-known veterans on the camp roster, Toronto rookies are going to have a tough time cracking the starting line-up.