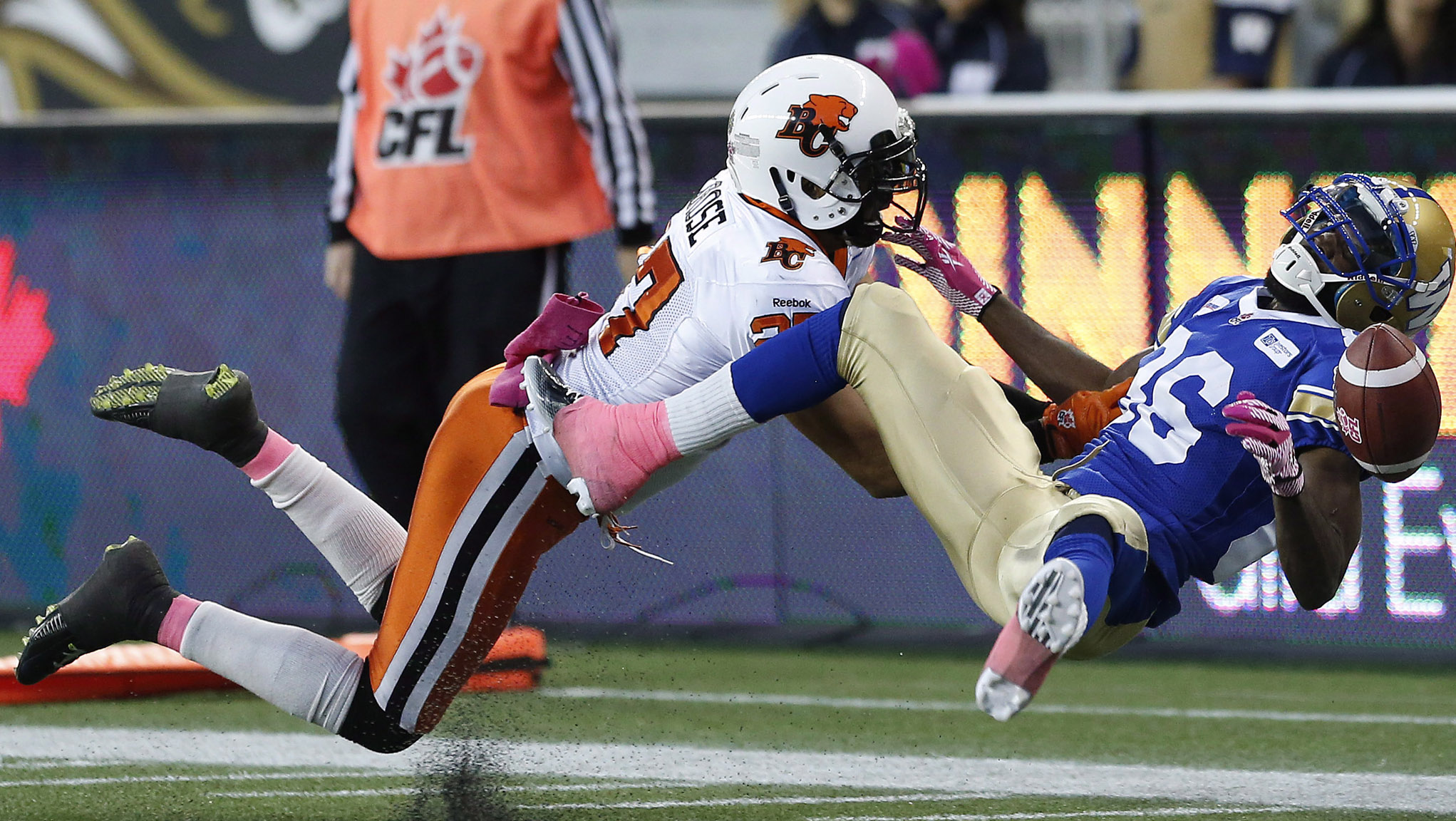 During his CFL career with Edmonton and the BC Lions, J. R. LaRose broke his leg twice and fractured his forearm. The pain he suffered with those injuries didn’t compare to what he felt when hearing the news that close to 1,000 unmarked graves had been discovered recently at two former residential schools.

“It breaks my heart,” said LaRose, a member of the Cree nation who is registered with the One Arrow First Nation in Saskatchewan.

“You look at all the people that just haven’t made it home. The thing that happened here in Canada, where Indigenous kids were taken from their families, placed by the government in schools run by the Catholic Church, it’s genocide. They tried to destroy the culture of Indigenous people.” 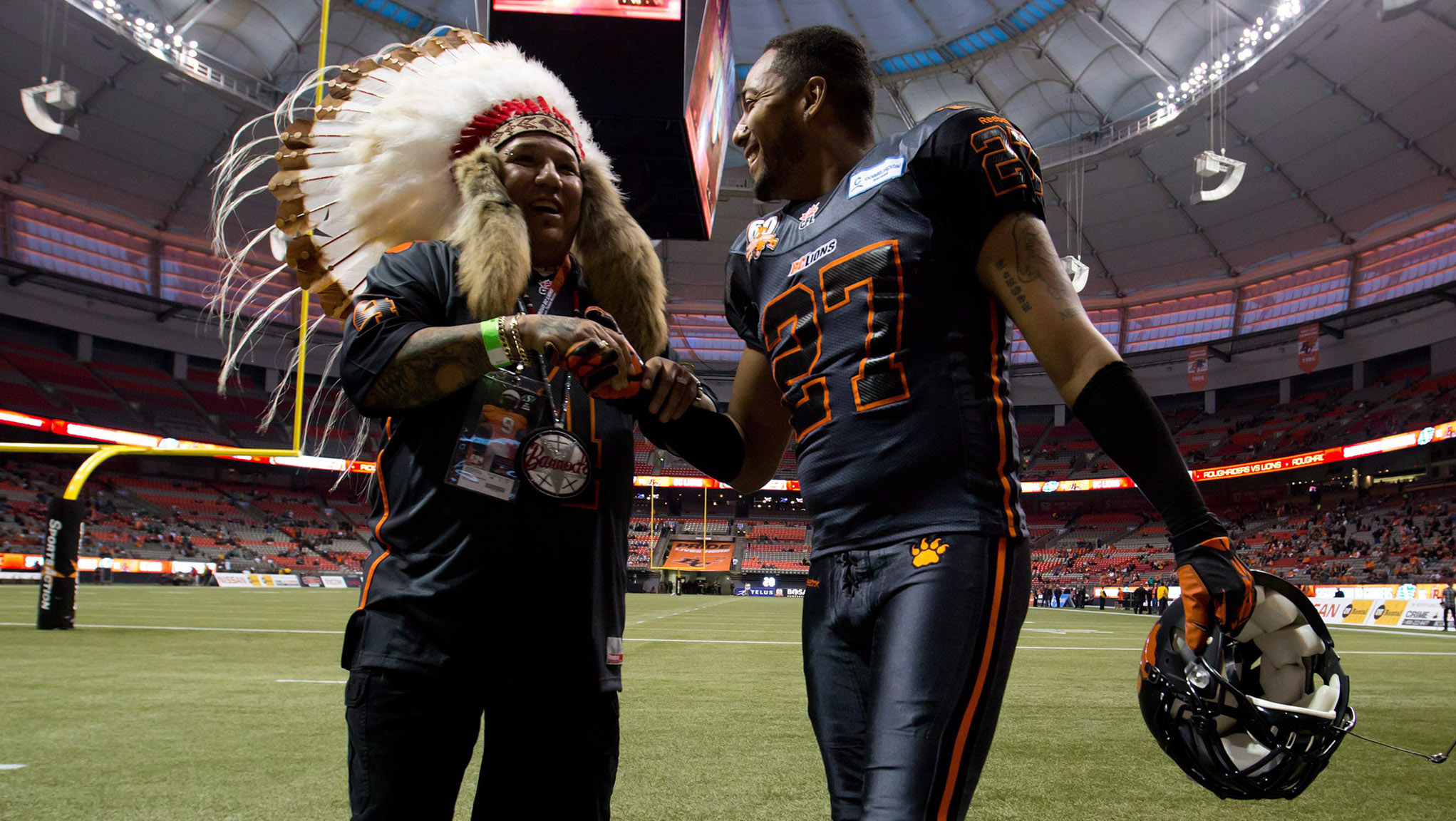 J.R. LaRose, seen here meeting with Alex Bannock of Coquitlam, BC, originally from Lake St. Martin First Nation in Manitoba, in 2013 ahead of a BC Lions’ game (Photo: Darryl Dyck/The Canadian Press)

Last week the Cowessess First Nation in southern Saskatchewan said 715 unmarked graves have been found on the site of a former residential school. Last month, the remains of 215 children were found buried on the grounds of a residential school near Kamloops, BC.

Like many Indigenous people, LaRose has experienced the multigenerational trauma of residential school survivors.

His mother Barbara attended a residential school in Duck Lake, Sask. As a single mother in Edmonton, Barbara used drugs and had several abusive boyfriends. Growing up, LaRose was physically and sexually abused and had anger issues.

LaRose’s first love was hockey, but his mother couldn’t afford to enroll him in the sport. A local family helped pay the fees for him to play football at age 15.

“Football for me was an outlet from a lot of the things I had gone through in my childhood, dealt with abuse,” he said.

“I was an angry kid. Football gave me hope that I could take this somewhere.”

LaRose played junior football with the Edmonton Huskies, then went on to a nine-year CFL career, winning a Grey Cup with the Lions in 2011. The six-foot, 210-pound safety had 217 tackles in 129 games.
Since his retirement in 2014, LaRose has been involved in motivational speaking and working to combat bullying and harassment.

Other Indigenous athletes who have played in the CFL include former Ottawa Rough Rider Jay Roberts and his son Jed, who played for Edmonton; former Winnipeg quarterback Jack Jacobs; and one-time Lions offensive lineman Levi Horn.

Former Winnipeg placekicker Troy Westwood is non-Indigenous but was adopted into the Anishinaabe culture at the Turtle Lodge, a centre for education and wellness at Sagkeeng First Nations in Manitoba.
LaRose isn’t surprised there haven’t been more Indigenous players in the CFL.

“It’s important to understand when you look at a lot of Indigenous people that live on reserves or in small towns, a lot of them don’t have access to football as opposed to if you live in a bigger city,” he said.

For some Indigenous youth, even if they have the talent to play sports, leaving their reserve can be difficult.

“They are being taken out of their comfort zone of their community and now play in a whole new environment, which can be a huge barrier, especially if you haven’t left your community,” said LaRose.

“On top of that, they are an outsider. They are coming into a new place where you don’t know anybody, and look at the history of racism. These are real barriers that people would be faced with.”

“Football for me was an outlet from a lot of the things I had gone through in my childhood. I was an angry kid. Football gave me hope that I could take this somewhere.” — J.R. LaRose

Allan Lafond, of the Pasqua First Nation near Regina, is a defensive lineman who attend the 6 Nations Elite Development Camp and has been recruited to play at Dalhousie University in Halifax.

LaRose said there is an untapped wealth of football talent among Indigenous athletes.

“You should see some of these kids, they’re huge,” he said. “When I go speak at some of these places, especially in Saskatchewan, they have some big, big boys.

To recruit some of these players, junior leagues and universities need more contact with Indigenous communities, LaRose said.

“I think schools or programs need to hold camps in some of these communities to get that engagement,” he said. “It’s something I’m looking to start to promote now that the (COVID-19) restrictions are starting to be lifted, is promotion of football in Indigenous communities.

“But, again, one of the biggest barriers is there’s a lack of football in some of these small communities.”

When he played, LaRose said some African-American players compared the racism in Canada against Indigenous people to what they experienced in the U.S.

“A lot of them would say that a lot of Indigenous people are treated how Blacks are in the States,” he said.

For much of his life LaRose didn’t experience that racism. He got a taste of what prejudice felt like in Brandon, Man., just prior to the pandemic.

Besides him there were two white families eating at a restaurant. The manager spoke to the other families but totally ignored LaRose, even when he was paying his bill.

“I’ve been very privileged in a sense being a pro athlete,” he said. “When I go different places, especially as a motivational speaker, they know who I am as an athlete, they treat me differently.