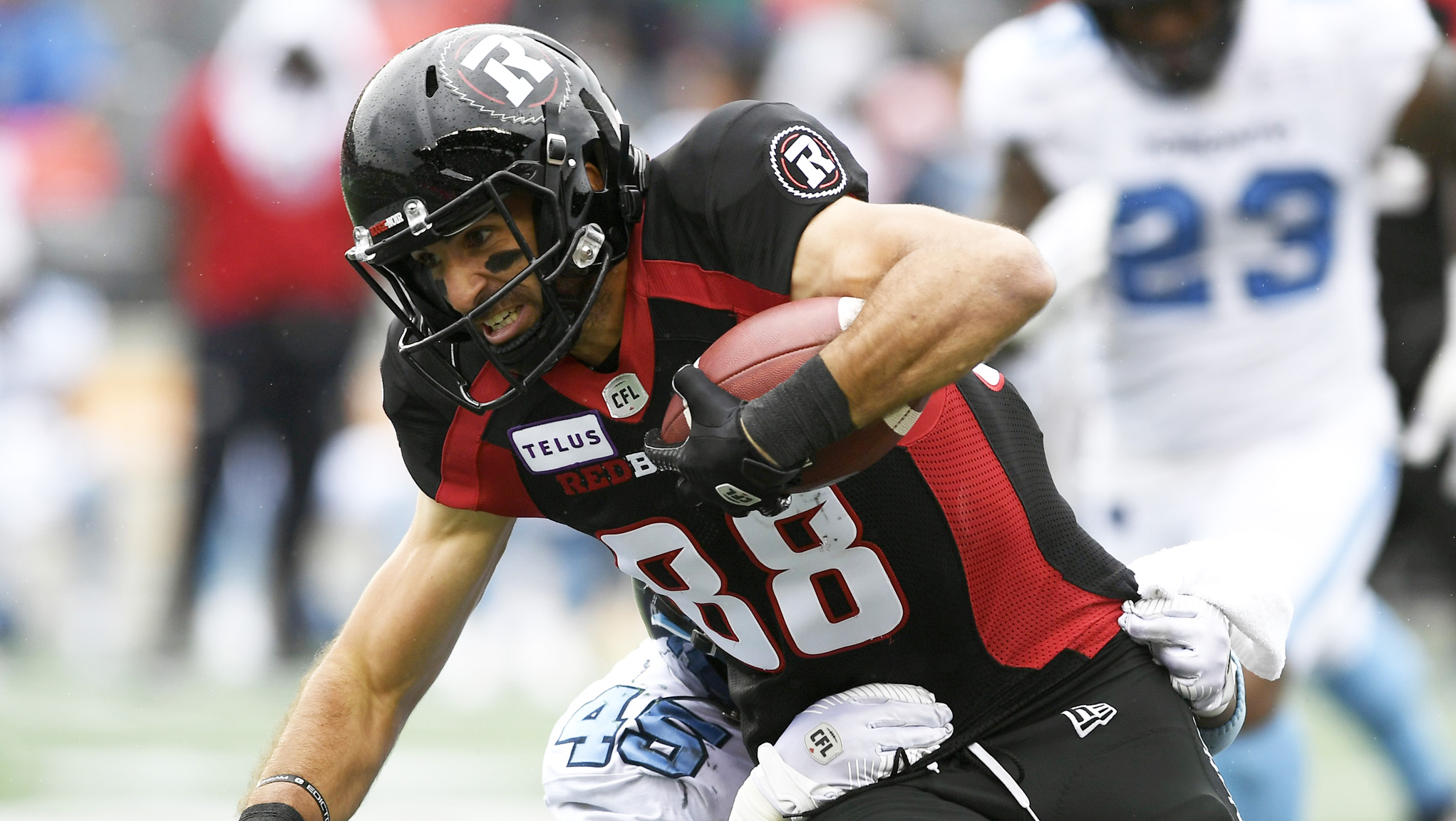 When you reflect on Brad Sinopoli’s nine seasons in the CFL, they tell the story of one of the best Canadian receivers to ever play. But Sinopoli’s career also followed one of the most unlikely paths we’ve seen. It goes to show how far pure athletic talent and a little adaptability can take you.

Sinopoli retired last week after spending the last five seasons with the Ottawa REDBLACKS and he’ll leave a massive void on a team very much in transition. Even during Ottawa’s difficult 2019 season, Sinopoli led the team with 72 catches and 113 targets. Personally, I’m a little choked I won’t get to see a few more years of Sinopoli catching passes over the middle. However, his retirement also gives us an opportunity to appreciate what was a stellar career.

Sinopoli’s five years in Ottawa cemented him as one of the league’s most consistent, reliable, and dangerous possession receivers. The fact he carried a Canadian passport was an added bonus that also puts him in elite company.

Sinopoli went over 1,000 yards in each of his first four seasons with the REDBLACKS, including his banner 2018 that saw him finish with 1,376 to go along with four touchdowns. Only a few Canadian receivers have gone over the millennium mark in four consecutive years, as Sinopoli joined the likes of Ben Cahoon and Ray Elgaard. Not bad.

Now, guys like Elgaard, Cahoon, Tony Gabriel, and Jock Climie all played well over a decade in the CFL at the same position. As he’s retiring at 33, Sinopoli won’t have as long a career as those other celebrated Canadian receivers. But, considering his age and the fact he lost the entire 2020 season due to a pandemic, it’s fair to think Sinopoli could have performed at a high level for four or five additional seasons. As such, it’s perfectly warranted to mention Sinopoli among the great Canadian receivers in league history.

Let’s also not forget Sinopoli didn’t start his professional career playing slotback. When the Calgary Stampeders made Sinopoli a fourth round pick at the 2011 CFL Draft, he was a standout quarterback coming off a stellar senior season at the University of Ottawa.

That senior year saw Sinopoli win the Hec Crighton Trophy as Canada’s top college football player, and for good reason. After throwing for 2,426 yards and 12 touchdowns as a junior, Sinopoli cranked out a Gee-Gees team record 2,756 as a senior to go along with 22 touchdown passes. As a result, he was one of just two quarterbacks invited to the 2011 CFL Combine.

For Sinopoli to make the transition from quarterback to receiver in his third professional season is remarkable to begin with. But to become a standout slotback only a couple years later is truly incredible. The Stamps switched Sinopoli to receiver for the 2013 season and he showed flashes over two years in red and white before signing with Ottawa ahead of the 2015 campaign. The rest is history.

As Sinopoli retires he’ll be remembered for a lot of things. He was a two-time Most Outstanding Canadian and three-time East Division All-Star. Sinopoli played in three Grey Cup games with the REDBLACKS, which included catching six passes for 94 yards and a touchdown in the team’s triumph over Calgary in 2016. He also earned an additional Grey Cup ring with the Stamps in 2014. But the thing I’ll remember most is Sinopoli’s robotic consistency.

Even considering a 2019 season marked by quarterback uncertainty, Sinopoli finished first or second in targets and receptions in all five of his seasons with Ottawa. He was automatic over the middle in second-down conversion situations. He drew coverage to open things up for other field-stretching options over the years like Greg Ellingson or Chris Williams. For quarterbacks Henry Burris and Trevor Harris, he was the ultimate safety valve.

Sinopoli is getting a lot of praise and celebration since announcing his retirement last week. He deserves every bit of it.