EDMONTON — At some point very early in the Edmonton Elks training camp, when the euphoria of being back on the field and with his teammates begins to wear off, Trevor Harris will take a moment to fully appreciate what’s in front of him.

He may need a few of them. In his second year as the Elks’ starting QB, Harris will stand in a well-protected pocket, look downfield and no one will blame him — at this point, anyway — if he gets indecisive.

He’ll see Derel Walker, his longtime target Greg Ellingson and Armanti Edwards, all fully expected to have 1,000-plus-yard seasons this year. He’ll see familiar faces with engrained chemistry, like Kenny Stafford, Kenny Shaw and Tevaughn Smith. That’s not even getting into the new additions (Rodney Smith) that ooze talent the way the rest of us have our attention spans sapped by social media. 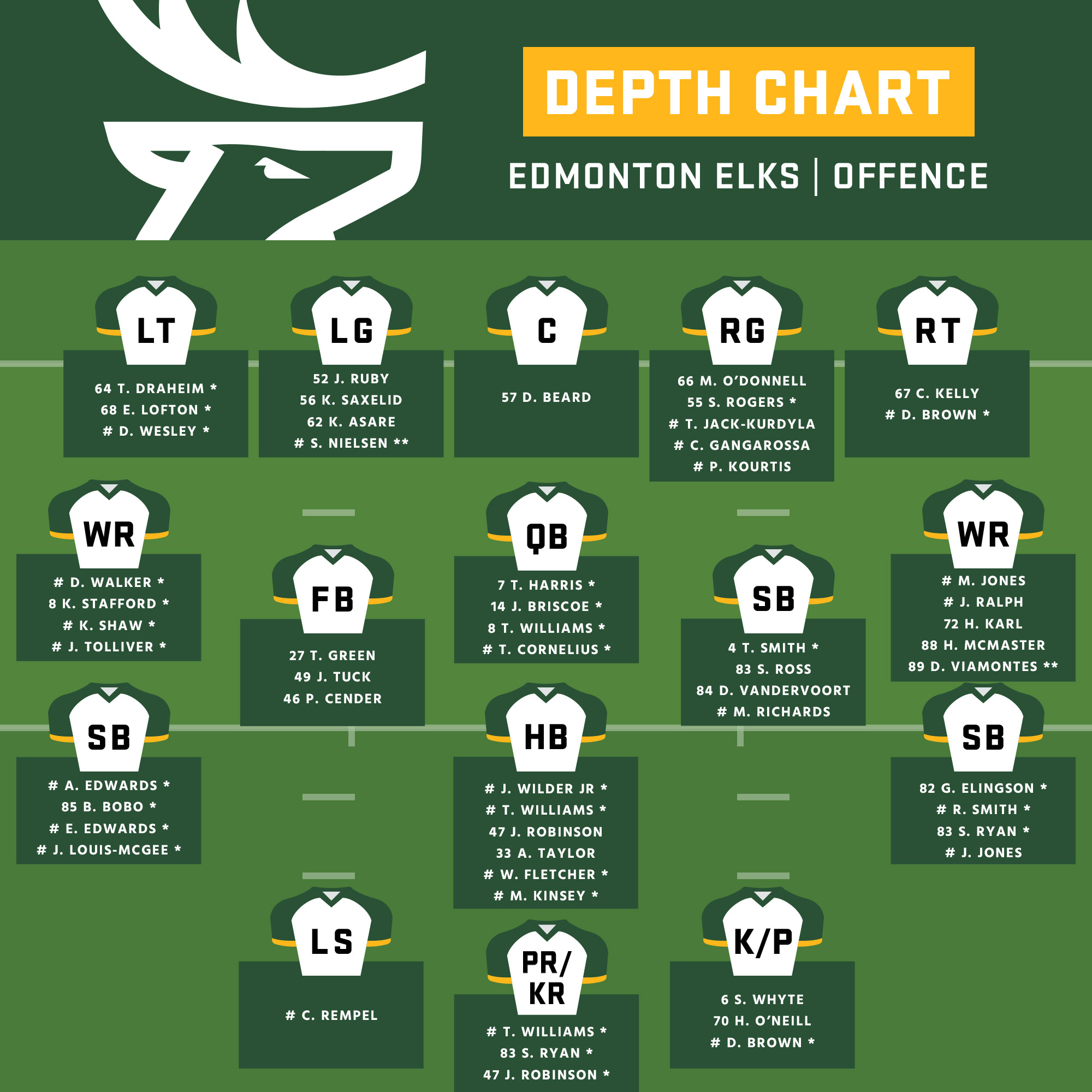 If for some reason Harris — who has thrown for more than 4,000 yards four times in his career and has cracked the 5,000-yard mark once — decides not to air it out, he’ll have a variety of lethal options near that pocket at running back looking for the handoff.

These are the things that quarterbacks dream about at night (you hold out hope they might be like the rest of us and dream about being in a public place without a mask, or that they keep showing up for their grade 11 math final without having gone to a class all year, but it’s sadly not likely the case). So, somewhere early in that Elks camp, expect Harris to realize what he has around him and in turn what that means for fans in Edmonton.

We’re entering into the time of year where every team thinks it could win a Grey Cup. Let this space and the charts that follow tell you that this isn’t pie-in-the-sky pre-season posturing. The Edmonton Elks should be contenders in an always-tough West Division. The offence may be the star of the show, but there’s much more to this team than highlight reel touchdowns and mountains of humanity that keep a quarterback upright.

Let’s quickly touch on that before we move on, though. Edmonton’s offensive line has led the league in sacks allowed two of the last three seasons and was second in 2016. They’ve come to be a force and should give Harris all of the time he needs to work. In a projected starting lineup of Tommy Draheim, Jacob Ruby, David Beard, Matt O’Donnell and Colin Kelly, there’s familiarity, an ability to play different positions and success. A small sign this group of giants might be a little blessed: Derek Dennis — a great tackle in this league over his five years in Calgary — opted to not play this season and O’Donnell ended up signing shortly after. Consider that SirVincent Rogers still needs to be worked in and the promise that Kyle Saxelid showed as a rookie and there’s a good rotation of players here to protect Harris and to open up holes for the run game.

About that run game. Elizondo has the makings of a two-prong (at least) attack at running back. If James Wilder Jr. shows the powerful, relentless form that he did as a rookie with the Argos in 2017 (he left Toronto after 2019 still averaging 5.6 yards per carry), the Elks could be a true pick-your-poison problem for opposing defences. Behind Wilder is former Calgary running back/return threat Terry Williams, who adds a faster scatback dynamic. Elizondo also has 2018 pick Alex Taylor behind Wilder and Williams, along with Americans Jordan Robinson, Walter Fletcher and Marvin Kinsey fighting for a spot in that pecking order. 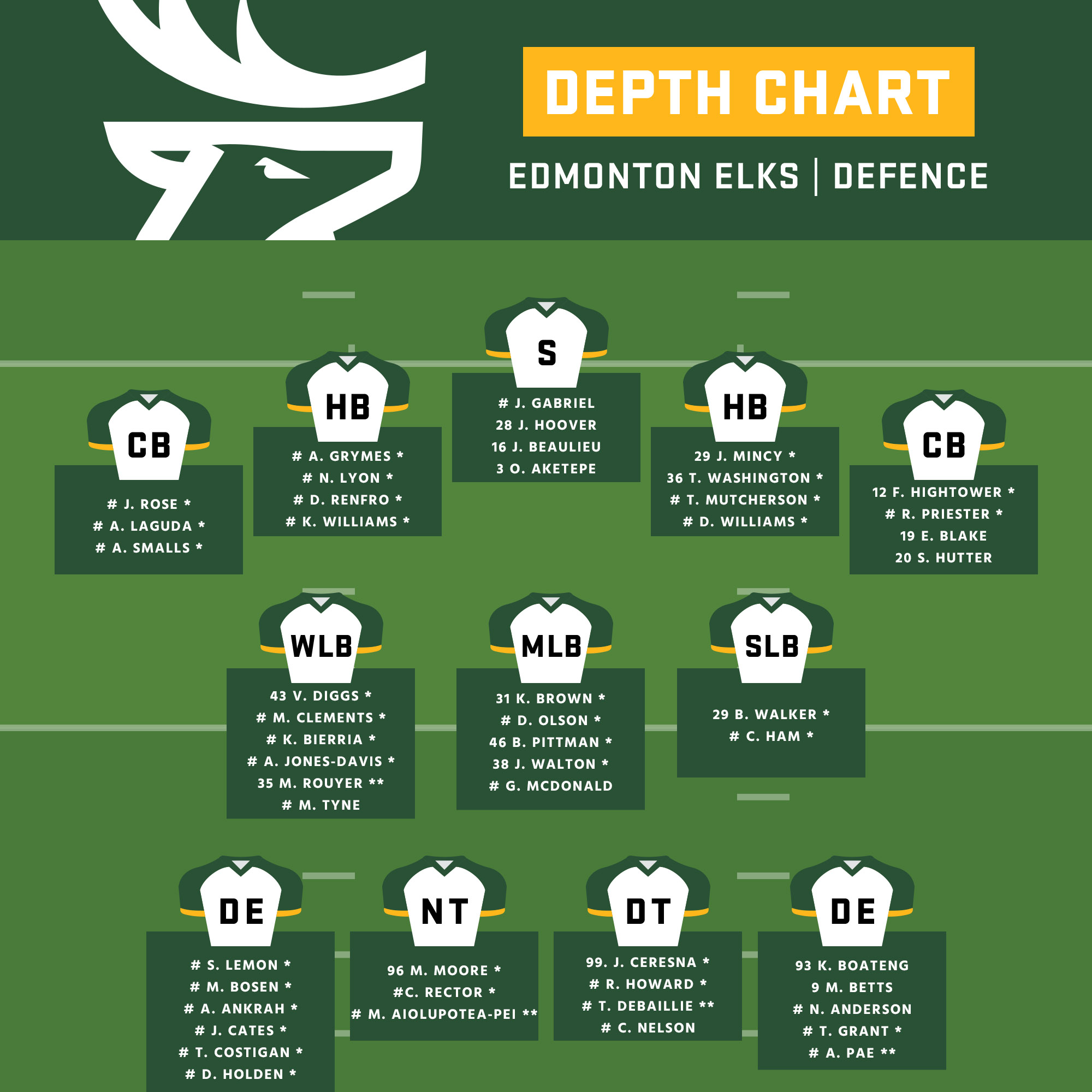 It may not be as glitzy on the other side of the ball, but GM Brock Sunderland is building up a strong defence that should be able to get to quarterbacks and will try to increase its turnovers. Kwaku Boateng heads into his fourth season on the verge of establishing himself as one of the top defensive ends in the league. At the other end of the defensive line stands someone already in that conversation in Shawn Lemon, a veteran of nine seasons with 70 career sacks.

On the interior d-line you have two players coming off of breakthrough seasons, albeit a year apart. Mike Moore steps into Almondo Sewell’s sizable cleats at nose tackle, after he posted a career-best 23 tackles and nine sacks in 2019. Defensive tackle Jake Ceresna returns from exploring NFL opportunities, looking to build on his 2018 totals of 32 tackles and eight sacks. That front four will try to keep Edmonton at the top of the sack lead, where it tied Saskatchewan (58) in 2019.

Edmonton’s secondary will look to provide a boost in the turnover game. The team managed just 15 interceptions last year (eighth in the league), despite leading the league in two-and-outs (102). The arrival of Jonathan Rose at cornerback, the return of Aaron Grymes at halfback, Jermaine Gabriel at safety and the return of Jonathan Mincy at half and Forrest Hightower at corner marks some significant change in the defensive backfield. Some production there will obviously go a long way.

The linebacking corps will need to prove itself as well. Vontae Diggs had 73 tackles at Will linebacker in 2019, earning the team’s rookie of the year nod. Kevin Brown comes over from Ottawa with a golden opportunity in the middle. He loves playing special teams and will try to bring the same tenacity to a starting role. Brian Walker could vacate his halfback spot to play Sam linebacker, taking the role that Don Unamba had in 2019.

Overall, that’s a lot of change behind what should be a very good defensive line. In a short training camp with no pre-season games, the Elks will be lucky to have veteran defensive coordinator Noel Thorpe, who will be able to get this unit on the same page quickly in a challenging situation as we emerge from some very challenging times.

Finally, Edmonton’s special teams unit is some return contributions away from being a fully dangerous outfit. Terry Williams will try to end Edmonton’s far-too-long return TD drought (daylight was last found in the return game on Aug. 28, 2015) and Sean Whyte (87 per cent on field goals) and Hugh O’Neill (3,609 yards on punts in 12 games) will hold down the kicking game for another season.

One last area that would help the Elks in 2021: Discipline. Edmonton led the league in this category in 2019, flagged 197 times for a league-worst 1,677 yards. A coaching change (while reminding you that Jason Maas was initially replaced by Scott Milanovich, who went back to the NFL before the 2021 season got off the ground, opening the door for Elizondo) and a year away from the game might be the cooling off period this roster needed to stop hurting itself on the field.

We know we’ll see Elks charge on offence. If they can hold their ground on defence and provide the odd spark on special teams, we could see something special for the freshly renamed team in Edmonton this year.