This is the Remix: New look Lions’ defence has to produce

This is the Remix: New look Lions’ defence has to produce 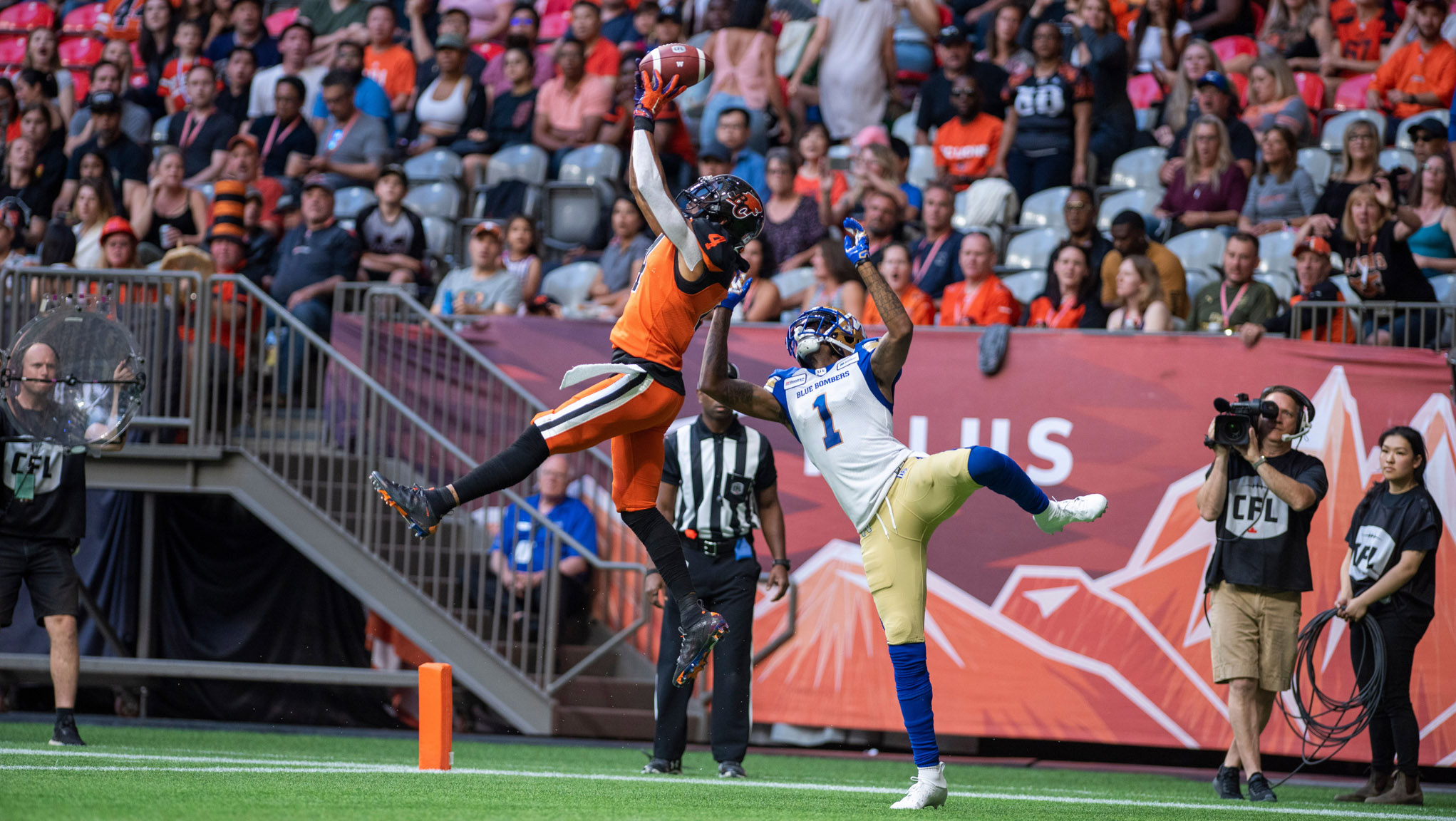 Garry Peters was a bright spot on BC's defence in 2019, despite the team winning just five games and missing the playoffs (Jimmy Jeong/CFL.ca)

The depth chart from the last regular season game the BC Lions played back on Nov. 2, 2019, shows seven starters on defence who no longer are with the team. That doesn’t include defensive back Aaron Grymes, who missed the game with an injury.

On the list of vacated Lions is safety Brandon Dozier, who led the team with 77 tackles, linebacker Maleki Harris, third with 68 tackles, and the entire defensive line, including defensive end Shawn Lemon and tackle Odell Willis, who combined for 12 sacks.

None of that really matters to Rick Campbell, who took over as BC’s head coach and defensive coordinator after the firing of DeVone Claybrooks.

At lot has changed since COVID-19 cancelled the 2020 season. Instead of dwelling on the past, Campbell is more focused on what the Lion defence will look like when the CFL returns in August.

RELATED
» Ready for Kickoff: Previewing the 2021 CFL season
» New Kids On The Block: Lions confident in special teams
» A QB Fortress of Solitude: Lions aim to protect Reilly in ’21

“It’s been two years,” said Campbell. “It’s such a unique situation. Overall, I don’t think 2019 has a lot of relevance for us because it’s a whole new coaching staff and a lot of new players.

“We thought it would be a one-year project, it ended up a two-year project. We have a good mixture of veteran guys and some new guys.”

Defensive back coach Ryan Phillips is the lone remaining defensive coach from the previous staff. Gone are Rich Stubler, who was defensive coordinator and linebackers coach and Chris Ellis, who looked after the defensive line.

Leroy Blugh, a CFL hall of famer who was on Campbell’s staff in Ottawa, will be defensive line coach while Travis Brown, who spent the last two years in Edmonton, will oversee the linebackers.

One of the Lions’ strengths in 2019 was a pass defence that gave up just under 230 yards a game, third-least in the league. The core of that secondary is returning with players like cornerback Garry Peters, halfback T. J. Lee and Canadian linebackers Adam Konar and Isaiah Guzlak-Messem.

The Lions have also added linebacker Dyshawn Davis, who played three years in BC before spending 2019 with Saskatchewan, and Canadian Boseko Lokombo.

Campbell has high hopes for linebacker Jordan Williams, whom BC picked first overall in the 2020 CFL Draft.

“We have some guys that played some really good football in this league,” he said.

“I think the thing that really stands out in the group is the Canadian depth. If you have really good depth at that linebacker position it’s good for your defence, but it’s also good that guys can be big contributors on special teams.”

Lokombo was one of the Lions’ prized free-agent signings in February. BC picked him 21st overall in the 2013 draft and he spent four years with the Lions before jumping to Montreal in 2019 where he had 51 tackles, two interceptions and a forced fumble in 15 games.

Montreal traded him to Toronto in January 2020, but with the CFL season cancelled last year he never played for the Argonauts.

“I really like the way he was playing in Montreal,” said Campbell. “I like will linebackers that are versatile, meaning they’re just not a play-in-the-box linebacker but the type you can drop into coverage. Kind of one of those hybrid safety/linebacker types, so we’re going to do some stuff on defence.” 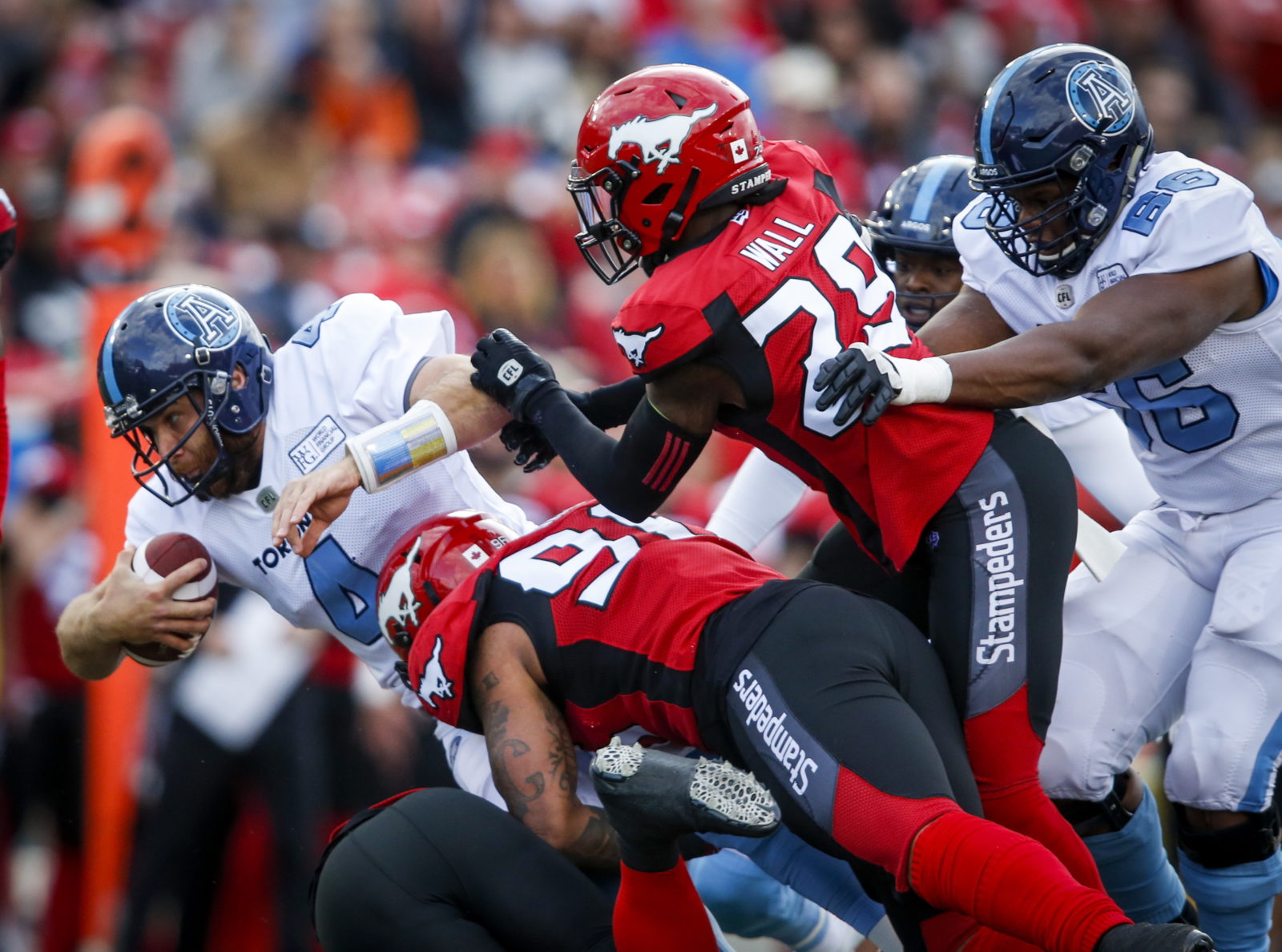 Chris Casher (tackling McLeod Bethel-Thompson in a 2019 game) had 34 tackles and seven sacks with Calgary. He'll have a chance to grow into a premier defensive end this year in BC (Photo: The Canadian Press)

If linebackers are the Lions’ strength, the defensive line is very much under construction.
Lemon, who led the Lions with eight sacks, has moved to Edmonton while the current stop on Willis’ CFL tour is Toronto. Nose tackles David Menard and Junior Luke both signed with Montreal while Jonathan Newsome retired.

BC turned to the free-agent market to sign J.R. Tavai, who led Ottawa in 2019 with seven sacks and 49 tackles, and Chris Casher, who has seven sacks and 34 tackles with Calgary.

The Lions will go to training camp with college players like Alfred Green, the 40th pick in the 2021 draft from Wilfried Laurier and O’Bryan Goodson, a defensive tackle from the University of Memphis. There also will be players with NFL experience like Dana Levine Jr., Ade Aruna and Tim Bonner.

“We’re definitely going to be newer and younger,” Campbell said. “We do have guys that have NFL experience, meaning that they’ve played pro football. They’re not household names but I’m personally excited about it because they are quite athletic guys.

“Normally, when you have unproven people that are trying to prove themselves, they are pretty hungry, pretty active and they’re pretty energetic.”

Having someone like Blugh, a 15-year CFL veteran who was the league’s Most Outstanding Canadian in 1996, will assist the learning process.

“Leroy’s a long-time coach and understands what it takes to play defensive line in the CFL,” said Campbell.

One of the challenges faced by every CFL team is not having exhibition games to make final decisions on players.

“It’s going to be different as far as that goes,” said Campbell. “We’re going to have to make the most of every day and every practice. We need to try to become as good a football team as we can in a matter of three weeks. That’ll be interesting to see how that all plays out.”