Staying the Same: Continuity the key for Tiger-Cats

Staying the Same: Continuity the key for Tiger-Cats

HAMILTON — If it’s not broken, why fix it?

That seems to be the sentiment around the Hamilton Tiger-Cats front office as they head into the 2021 campaign. The roster that helped the franchise to its best-ever win record and to a trip to the 107th Grey Cup is almost completely intact.

After going 15-3 in 2019, the Ticats were the beasts of the East, dominant on both sides of the ball. Although they were bested by the Winnipeg Blue Bombers in the final game of the season on a chilly night in Calgary, there wasn’t any reason for them to panic and do a complete overhaul.

Most of the key pieces are returning this season and even with a few departures, the Ticats are still a favourite to win the East.

The most interesting storyline for the Tabbies in camp will be at the quarterback position. With Jeremiah Masoli healthy and recovered from his season-ending knee injury, it’s likely that he’ll take back his No. 1 spot for the black and gold. But after Dane Evans proved he’s a viable option as a starting quarterback, throwing for 3,754 yards and 21 touchdowns to go along with 13 interceptions and taking Hamilton to the Grey Cup, perhaps head coach Orlondo Steinauer would like to give the 27-year-old the reigns to start the season. 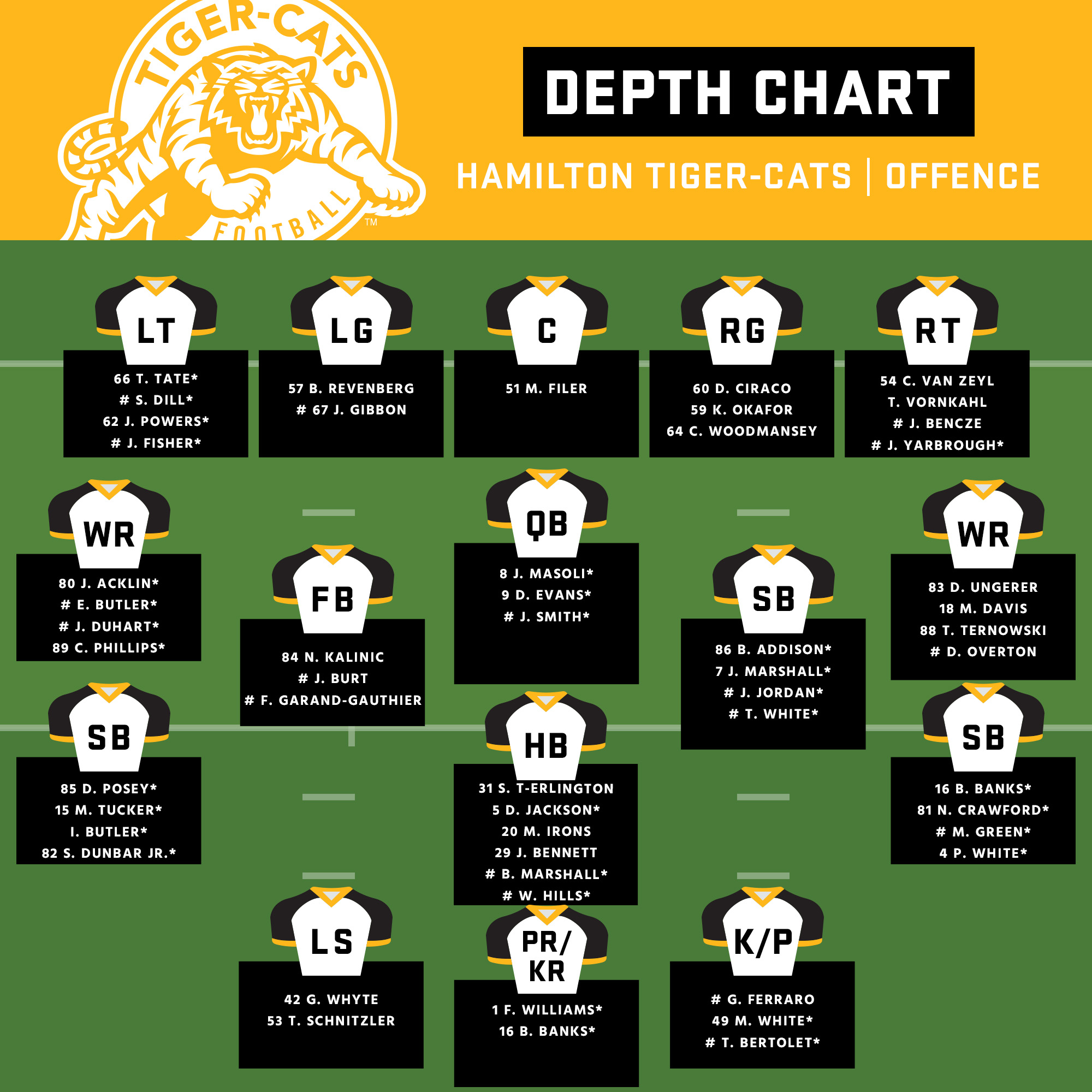 Whoever is behind centre when the season kicks off in August, they’ll have to be thrilled to see the pass-catchers awaiting the football.

2019’s Most Outstanding Player, Brandon Banks is back in the fold after signing an extension with the club before becoming a free agent this off-season. Banks led the league in receiving yards (1,550) and hauled in 13 touchdowns in 16 games. His big-play ability will be a welcome addition for which ever quarterback is throwing him passes this year.

Bralon Addison is back in black and gold after a stint in the NFL, adding another offensive weapon. Addison was stellar in 2019, hauling in 1,236 yards and seven touchdowns. David Ungerer, Jaelon Acklin and DeVier Posey round out the wide receivers. Ungerer is expected to play a bigger role this year while Acklin will hope to build on his rookie season where he caught 708 yards and three touchdowns.

Posey also adds explosiveness to the Ticats offence and will be a dream for offensive coordinator Tommy Condell to work with. He did, after all, set a Grey Cup record in the 105th Grey Cup after hauling in a 100-yard touchdown reception before being named the game’s Most Outstanding Player.

It’s likely that the Tiger-Cats will go with the same running back by committee mentality they had in 2019. Three Canadians, Sean Thomas Erlington, Jackson Bennett and Maleek Irons, all carried the rock for the Tabbies and will likely do the same once again to provide some ratio flexibility elsewhere on the roster.

There was a major addition to the running backs room, however: Don Jackson. Jackson, who has spent his entire career with Calgary, has yet to play a full season but has given glimpses of an ability to carry a heavy work load. In 2018, he played in 13 games and rushed for 924 yards and three touchdowns while his 2019 campaign was cut short due to injury. Expect Jackson to find space in a rotation with the Canadians in Hamilton’s backfield this summer.

Four Canadian offensive linemen will likely assume their duties in the trenches looking to protect Masoli or Evans, including 2019’s Most Outstanding Offensive Lineman, Chris Van Zeyl. Mike Filer, the longest-serving Tiger-Cat is back and will suit up at his regular centre spot with Darius Ciraco and Brandon Revenberg filling in at right and left guard, respectively. Left tackle could be a competition during game but Trevon Tate may potentially fill that spot. 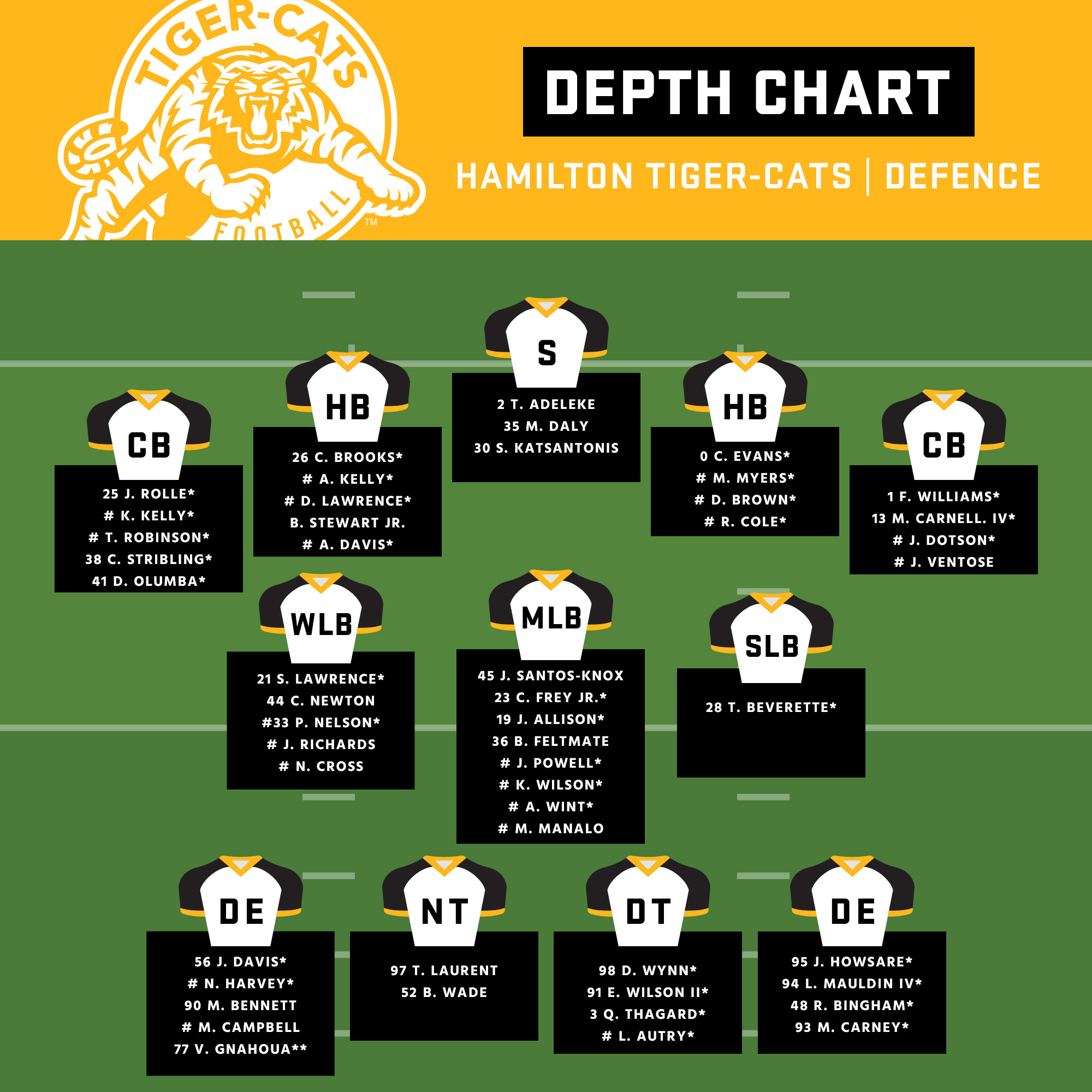 The Ticats’ defensive backfield looks just as dangerous as ever, even without shutdown corner Delvin Breaux Sr., who announced his retirement earlier this off-season, and Richard Leonard, who left for Calgary during free agency.

Jumal Rolle is likely to take over Breaux’s side of the field at cornerback while Ciante Evans, a free agency signing, will sit in Leonard’s halfback position and Cariel Brooks will remain in his usual spot at half. Canadian Tunde Adeleke is likely to keep his spot at safety while 2019’s Most Outstanding Special Teams Player Frankie Williams will continue to play double duty at corner.

The defensive line that had 54 sacks in 2019 (good for third in the league, just behind Saskatchewan and Edmonton who both had 56) is also completely intact. All four who suited up in the Grey Cup, Ja’Gared Davis, Ted Laurent, Dylan Wynn and Julian Howsare will start for Hamilton this year as they hope to continue to apply pressure to opposing quarterbacks.

It’s the linebacker group that things start to get interesting. Simoni Lawrence, who led the league in tackles the last time teams hit the field with 98, will suit up at the WILL linebacker position but there will be someone new to roam the middle of the field. Santos-Knox is likely the front runner to start at MIKE without Larry Dean in the mix (he signed with Hamilton as a free agent ahead of the cancelled 2020 season and inked a deal with Saskatchewan during the free agency period this year). Despite Santos-Knox missing most of the 2019 due to injury, he had a career season in 2018 with the Blue Bombers where he posted 82 defensive tackles and six quarterback sacks in 18 games.

The mystery of Hamilton’s defence lies at SAM. Without Rico Murray, who announced his retirement in February, the question remains as to who will suit up at the DB/LB hybrid position. Some insights from around the league suggest Tyrice Beverette will be the one to line up there but it’s most likely a battle for Steinauer to figure out in training camp.

Another battle to watch in training camp may not seem as exciting to some, but with kickers sometimes having the game on their foot, it’s exceptionally important to have someone reliable booting the pig skin. Lirim Hajrullahu is still in the NFL so the kicker position appears to be wide open. Gabriel Ferarro may be a front runner, after he spent his rookie season in Saskatchewan and connected on seven of his nine field goal attempts.

Williams and Banks are sure to continue to share the return duties while long-time long snapper Aaron Crawford signed with Calgary this off-season so it could be Gordon Whyte or Tom Schnitzler taking over.

With the majority of the pieces from one of their most successful seasons to date, the Hamilton Tiger-Cats are in a good place to continue that momentum into the new 2021 season as they eye playing (and winning) the Grey Cup in their own backyard.