Tait: ‘Legs’ settles into some big cleats in Winnipeg

Tait: ‘Legs’ settles into some big cleats in Winnipeg

There are potentially worse nicknames, we suppose, for a kicker. ‘Shanks’ comes to mind. Or ‘Whiff’, ‘Wide Right/Left’ or the football/soccer combo ‘Lionel Missy.’

So ‘Legs’ – the nickname new Winnipeg Blue Bombers kicker Marc Liegghio has owned for years – absolutely fits for all the right reasons. There’s the obvious play on and abbreviation on his last name and, most importantly, for the powerful whomp the Woodbridge, Ont. product packs in his right leg.

“My friend’s buddy, when he first met me to come play football, he right away called me ‘Legs’,” Liegghio explained in a media Zoom call following Day 2 of Blue Bombers training camp. “So, that’s been my nickname for most of the time until now. I’ve been going with ‘Legs’ and I say, ‘My first name’s Marc, last name is Liegghio. But, hey, you can just call me ‘Legs.’”

Liegghio is one of the biggest storylines as the Bombers opened training camp this weekend because he is replacing one of the Canadian Football League’s all-time greats in Justin Medlock. As stated previously, the initial plan for the Bombers after they selected Liegghio out of Western University last year – interestingly, with one of the components of the Zach Collaros trade with the Toronto Argonauts – was to have him working alongside Justin Medlock in 2020, with the veteran serving as a kicking sensei of sorts. 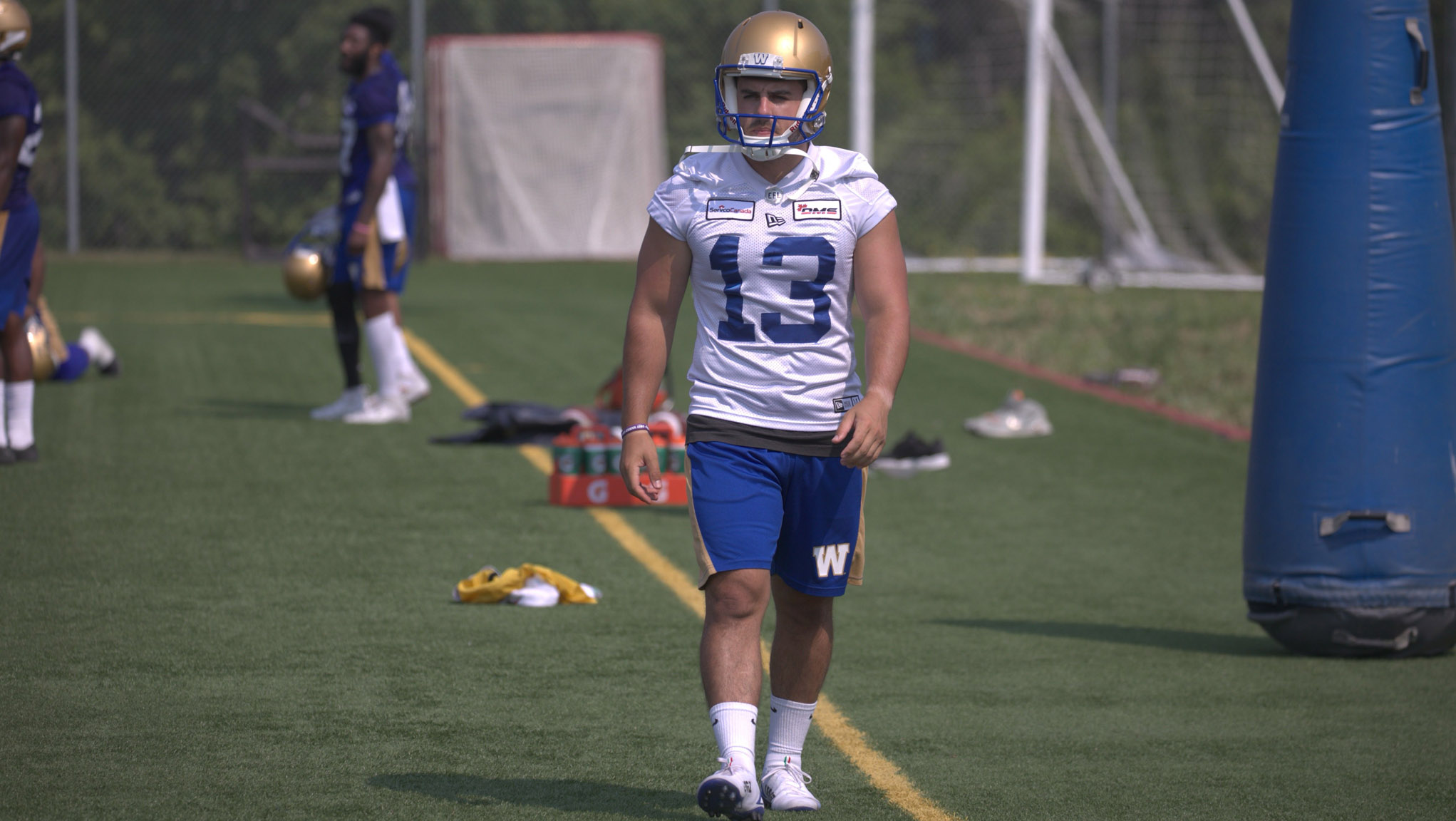 At Western, Liegghio set an OUA record for punt average and made 92 per cent of his field goals. The rookie goes into training camp without a challenger for the starting kicker job (Photo: Bluebombers.com)

“I wish I would have got the chance to work with him because I’ve watched him play many years and I know he’s going to be one of the all-time greats; definitely going to be a hall of famer,” Liegghio said.

“I’m just going to come in and provide what I can for the team. I know I’ve got some pretty big shoes to fill – that’s basically been the word on me coming here. I’m going to do my best to do what Medlock did for the team and, hopefully, even better.”

But with the plug pulled on 2020 and with it the idea of working with Medlock, Liegghio instead spent his time working on his craft with other CFL kickers in southern Ontario and kicking on his own. He also had countless sessions working with his personal trainer and a job at GoodLife Fitness before the gyms shut down. All of which explains the bare-arms/gun show thing happening when Liegghio took off his gear and sat down for his media availability on Sunday.

“I try and make it look like I can match the team,” said Liegghio, cracking a smile. “I know kickers have the (reputation) of not being very big guys. I know when I walked in here no one could really tell what position I was playing at first. I take that as a compliment.

“You put the hard work in on the field and the hard work in at the gym just to make you look like a full-on football player. You are a kicker and a punter, but in the end you are a football player and let’s say it comes down to making that tackle – I want to be sure I can fit in with those guys and be able to do that for them.”

The Bombers drafted Liegghio last year after he led U Sports punters with a 47.5-yard average – setting a new OUA record. He also finished his days with the Mustangs with a 92 per cent field goal percentage. They also backed up their faith in him after the Medlock retirement by opting NOT to bring in another challenger to camp. Bombers head coach Mike O’Shea reinforced that late last month when he said the club wasn’t asking him to be Justin Medlock, but just be himself.

“I love that he said that, because going into a pro environment, if you can come in and try and match what Medlock did it’s not really possible,” said Liegghio. “You’ve got to build up to that. I just think with my confidence I can reach that goal.”

“I always want to be better than who I’m playing or who I know I’m up against,” said Liegghio.

“That’s how I’ve always been. I know my last year in university I was second-team and first-team (all-star) and won some awards…obviously the awards are great but I wanted to make sure I was on top of every stat line and make sure I was the guy that everyone wanted to see play. I think I’m going to bring that same mentality to the pro environment.

“I know there’s a lot more pressure out there like full stadiums and that kind of stuff, but that’s just noise at that point and then when the ball is snapped I’m just there to do my job and get the three points or punt the ball where I need to.”