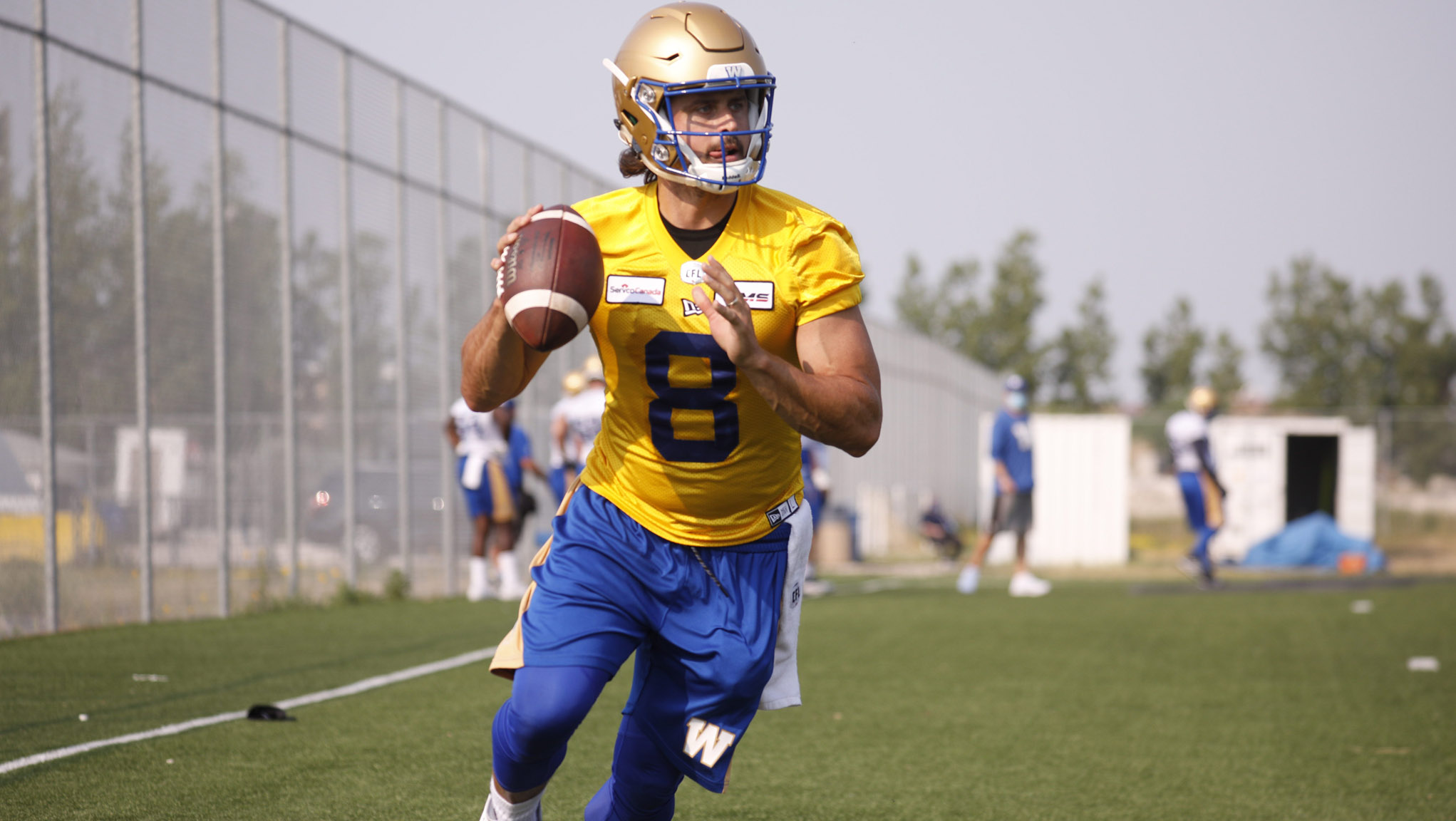 After a whirlwind four-game run with the Bombers in 2019, Zach Collaros should gain a tremendous amount from a full training camp in Winnipeg (Photo: Bluebombers.com)

With no pre-season, training camp is more important than ever this year, something Winnipeg Blue Bombers’ quarterback Zach Collaros is not taking for granted.

Especially after his previous escapades, when he was on three different teams in the span of just a couple of months in 2019.

“It’s going to be huge for me,” said Collaros, asked about the benefit of a full training camp with his team.

Collaros was traded from Toronto to Winnipeg on Oct. 9, 2019 before starting his first game just 16 days later. Suffice to say all of it still feels a little bit new.

“Now this, in my opinion, is a lot easier in starting from Day 1. I’m treating it like I’m a rookie or completely new to the team.”

RELATED
» Ready For Kickoff: Previewing the 2021 season
» Winnipeg’s stout defence ready for 2021
» When it comes to special teams, Winnipeg sets the gold standard

The wily veteran of eight CFL seasons and five different stops, tested by various injuries throughout his career, might feel like a rookie in Winnipeg. Not to Bombers fans, who watched him win four straight starts including a Grey Cup championship, the city’s first since 1990.

It’s fair to say Winnipeg’s hope of a repeat rests on the 32-year-old’s right shoulder. When the offence slumped following a season-ending injury to Matt Nichols — the club went 3-5 with Chris Streveler at the helm — Collaros provided a desperately needed shot in the arm.

In four starts, Collaros averaged an elite 8.8 yards per attempt, completed 69 per cent of his passes, and compiled a quarterback rating of 105.6. And while star running back Andrew Harris remained the focal point of the offence, the Bombers’ attack suddenly featured a new dimension, consistently attacking defences vertically.

Collaros had seven completions of 30-plus yards in just three post-season games, compared to Nichols and Streveler, who combined for just 16 such completions in 17 regular-season games.

Nichols was incredibly efficient throwing downfield before his injury, compiling a 143.2 quarterback rating on passes of 20-plus yards depth — tops among qualified starters. But he didn’t go deep often, with just 42 attempts (only Nick Arbuckle threw fewer among those qualified).

Streveler, meanwhile, provided no real threat downfield, completing just 27.6 per cent of his passes of 20-plus yards, with a 28.5 rating.

While the dual-threat backup Streveler vies for an NFL opportunity with the Arizona Cardinals — sophomore Sean McGuire is the lead candidate for backup in Winnipeg — Collaros currently has the same complement of weapons he had at the end of 2019.

That starts once again with Harris, a 34-year-old running back who continues to defy father time. A running back over 30 is rare enough, but Harris remains one of the CFL’s most dynamic weapons, coming off a third straight 1,000-yard rushing campaign (and fourth in five seasons) along with 529 receiving yards. In the Grey Cup he had 169 yards from scrimmage and two touchdowns.

In a league known for its passing, the Bombers do things differently, dictating games on the ground. Winnipeg led the CFL with 147.9 rush yards per game in 2019, well ahead of second-ranked Montreal (124.2). The Bombers ran the ball 48 per cent of the time on first down, first in the league and well above the league average of 38.4 per cent. 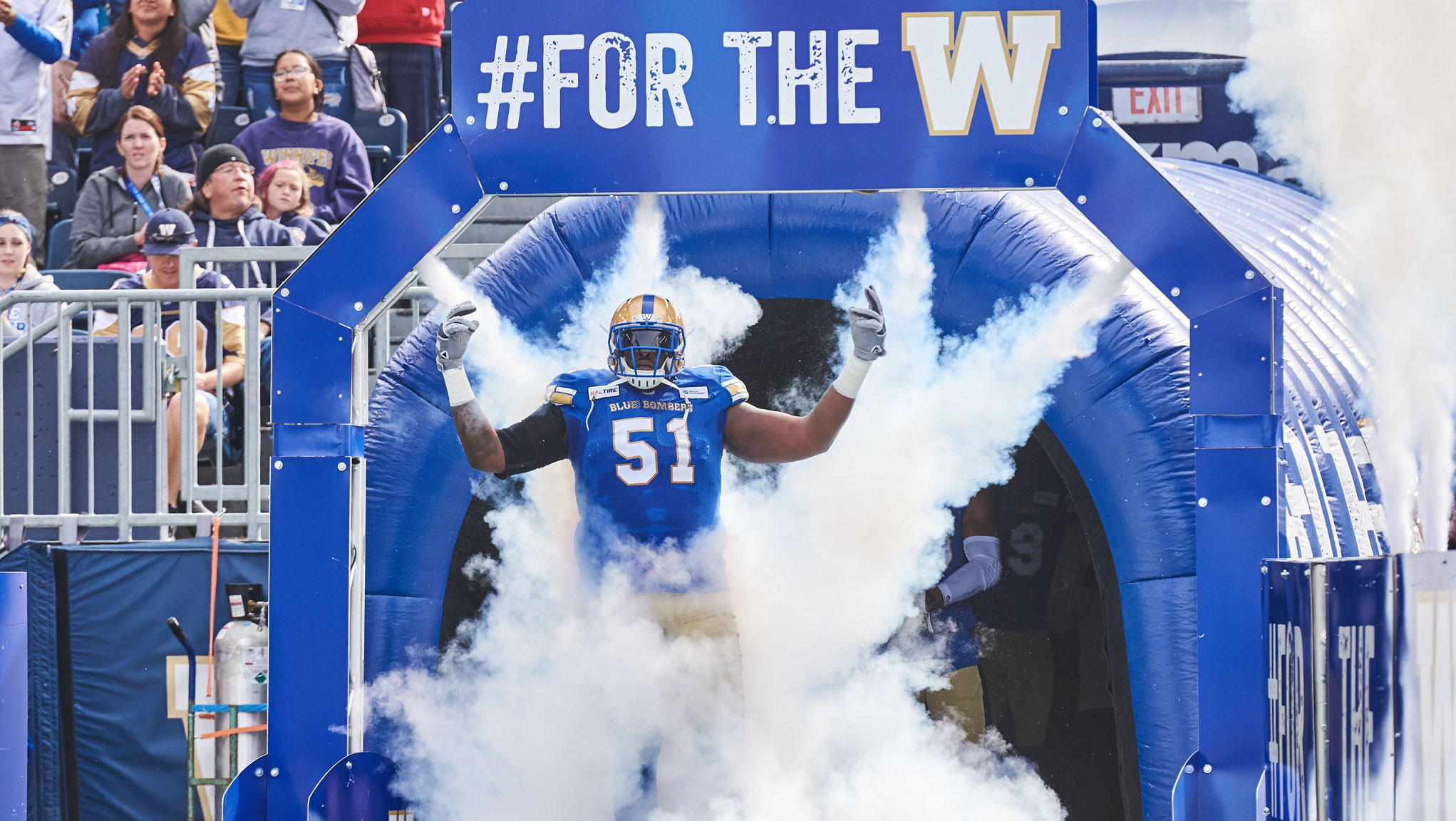 The Bombers' dominant offensive line is back for 2021, with Jermarcus Hardrick helping anchor it at tackle (Photo: Bluebombers.com)

An offensive line anchored by American tackles Stanley Bryant and Jermarcus Hardrick certainly played its part — and both are back in 2021 along with Drew Desjarlais, Michael Couture, Pat Neufeld, and Geoff Gray.

At receiver, it appeared the Bombers had added a game breaker in former Edmonton Elks pass-catcher Bryant Mitchell, who had 867 yards in 11 games in 2018 before going to the NFL. But Bryant retired before ever suiting up for the Blue and Gold. Still, Collaros will have plenty of weapons at his disposal.

Eighth-year veteran Darvin Adams leads a receiving corps that also includes Kenny Lawler and up-and-comer Rasheed Bailey, along with the versatile Nic Demski and reliable Drew Wolitarsky. After a disappointing season statistically, Adams reinvented himself late in the year, catching 12 passes for 229 yards in four games with Collaros at the helm — including receptions of 71 and 63 yards in the playoffs.

Former NFL receiver Cam Meredith is another player worth watching, with 31 NFL games to his name including a 2016 season in which he recorded 66 catches for 888 yards and four touchdowns. It’s a bizarre twist of fate for Meredith, as the 6-foot-3 receiver had already lived in Winnipeg before signing with the Bombers despite having no prior connection to the city.

While most of the Bombers’ starters are back, there is one change worth keeping an eye on early in 2021. Revered offensive coordinator Paul LaPolice left after four seasons with Winnipeg to become head coach of the Ottawa REDBLACKS and will be replaced by Buck Pierce, now in his seventh season on the staff after serving as quarterbacks coach in 2019.

“Buck’s been around a long time, from his playing days to coaching,” said head coach Mike O’Shea. “Buck’s been ready for this for a while. We see a lot of things similarly and we challenge each other. In terms of play-calling…he’s ready, he’s got it figured out.”

For Collaros, even with high expectations and the prospect of repeating as Grey Cup champions, this season represents a new beginning.

“There’s been a couple ‘light-bulb’ moments throughout the off-season…where it’s a light-bulb moment and it’s, ‘Oh, OK…that makes sense now why we call it that.’

“So, for me it’s starting from scratch.”