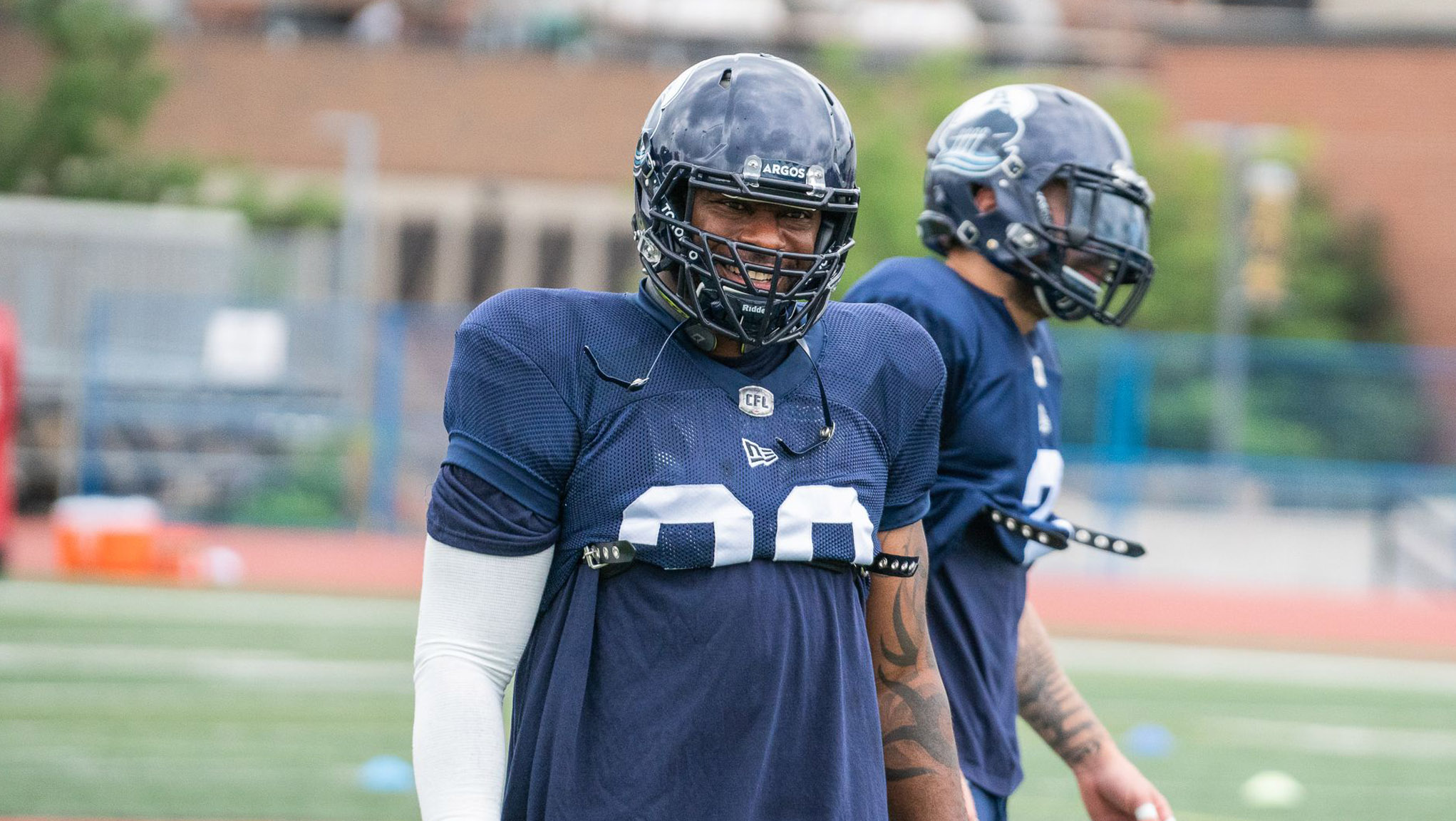 It’s hard to believe, but it’s true: One week from today will commence the first official CFL game week since November 2019. The season kicks off a week from Thursday when the Tiger-Cats and Bombers go head-to-head in a rematch of the 107th Grey Cup.

With that in mind, we’re just about done our 2021 season prep and almost ready to dive head first into game action. Before we do that, though, let’s finish off our look at some of the most intriguing players across the league for this season. Last week we focused on the West Division, so this week we’re turning our focus to the East. 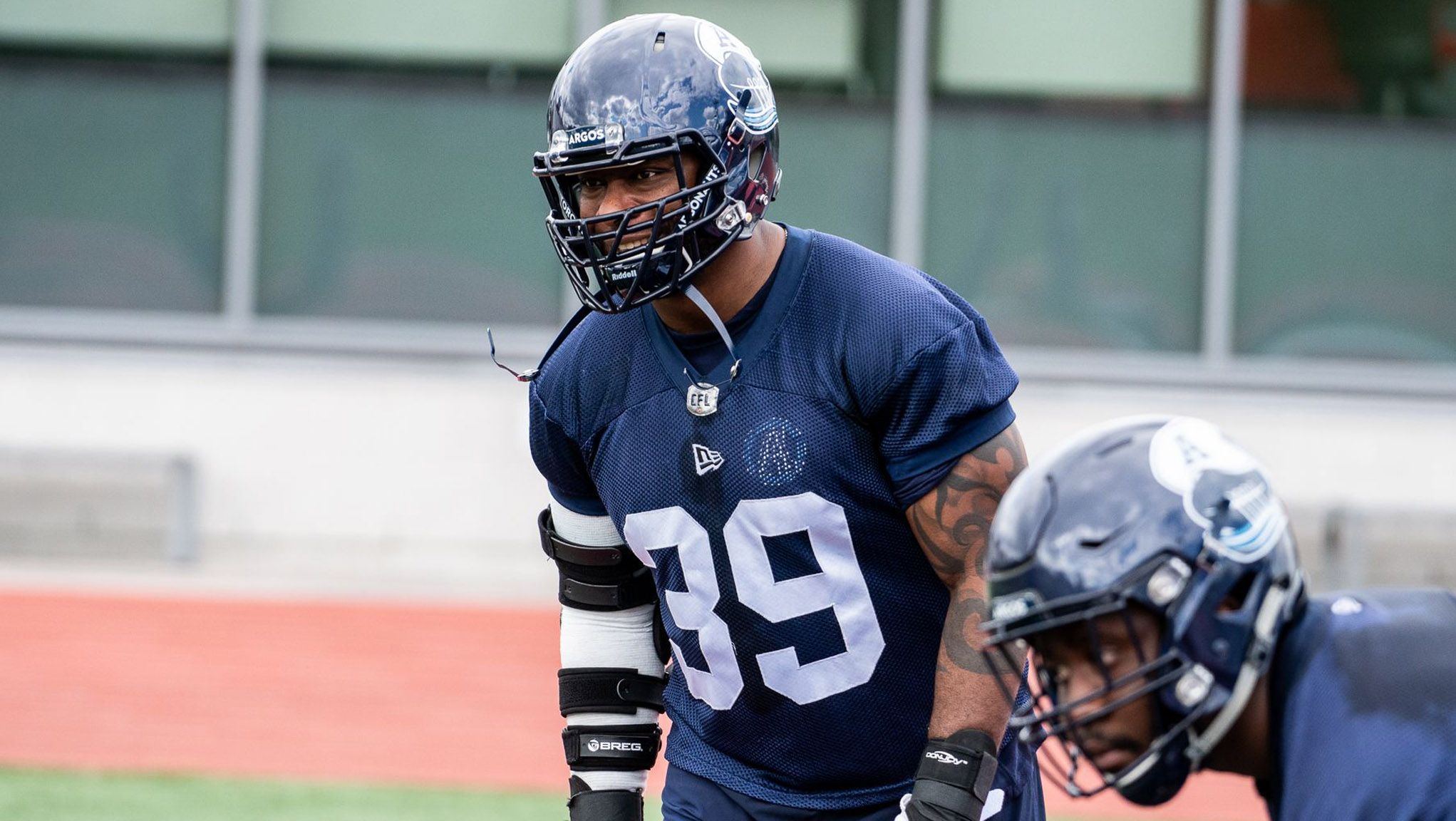 Charleston Hughes has let his recent free agency moves fuel his fire, to great success. The Argos are hoping he’ll do the same this year in Toronto (Adam Krueger/Argonauts.ca)

There isn’t a roster in the league that has added more star power over the last two years than the Argos. One of the biggest names added is Hughes, who joins Toronto after two seasons in Saskatchewan. Once again, one of the greatest pass rushing threats the CFL has ever seen is looking to show the world there’s still plenty left in the tank. The last time Hughes had motivation like that, it worked out pretty well.

Remember, Hughes only joined the Riders after Calgary opted to move on from him following the 2017 season. Then 34, the Stamps thought it was time to go younger and decided to let Hughes go to free agency. With a healthy chip on his shoulder, Hughes racked up 31 sacks in two seasons with Saskatchewan, leading the league in both 2018 and 2019. Now 37, Hughes was allowed to hit the market again and the Argonauts couldn’t be happier. 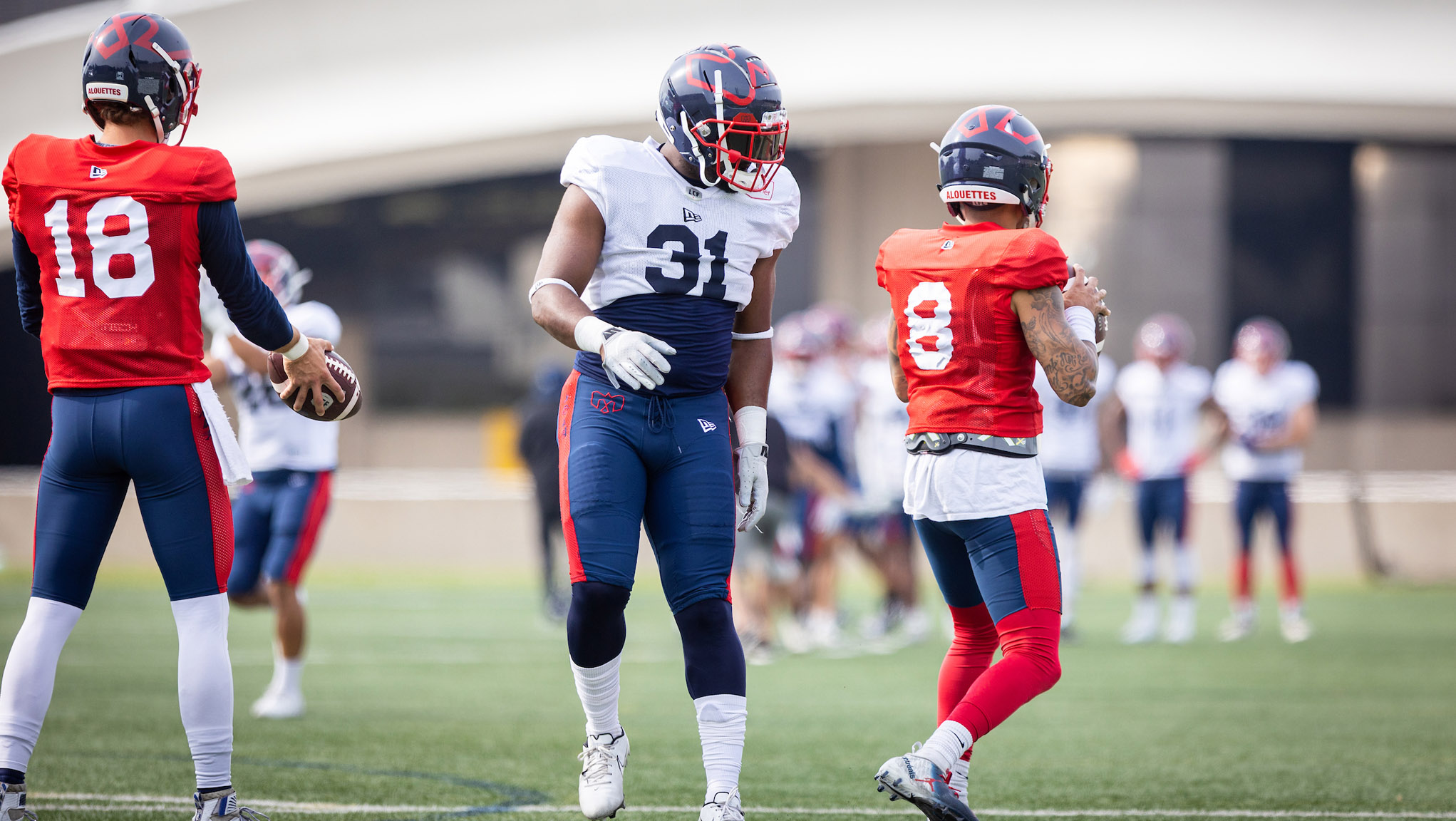 Because he only played 14 games in 2019, Stanback’s numbers don’t jump off the page as much as they would have over a full campaign. But, with no disrespect to any other player at his position, Stanback had started to lead the conversation as the CFL’s best tailback the last time we saw him. Still just 27, there’s nothing to suggest Stanback won’t be in the exact same form in a couple weeks.

2019 saw Stanback finish with 1,048 yards and five touchdowns in 14 games. But, he led all top running backs with a 6.2 yards-per-carry average, which was slightly ahead of Winnipeg’s Andrew Harris. Stanback is quick, powerful, elusive, and extremely difficult to tackle and comes back to Montreal a little miffed with how things ended for him south of the border. Expectations will be high for the Als in 2021 and if they’re met, Stanback will be a big reason why. 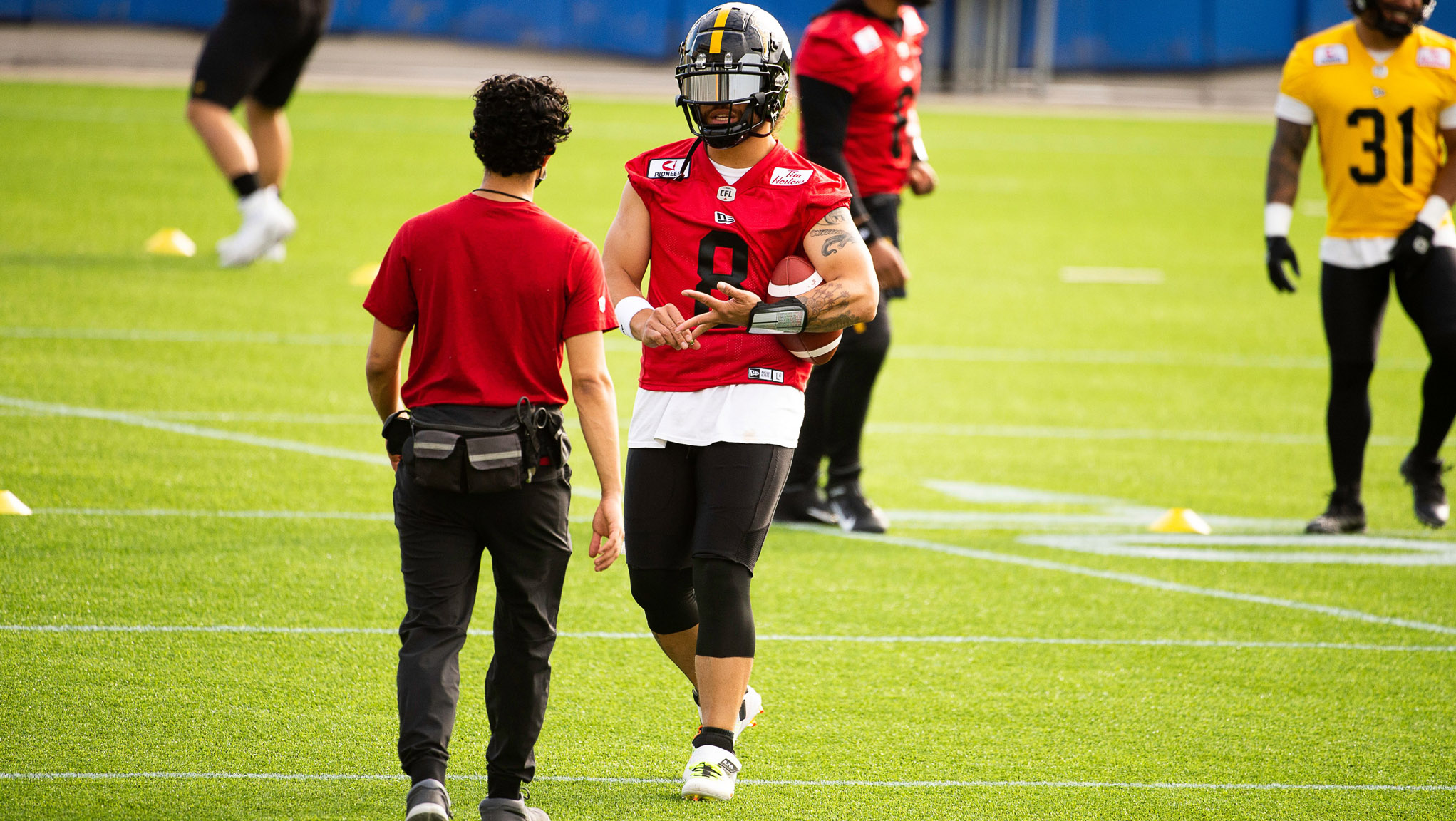 Jeremiah Masoli returns to action with a fully set table for him in Hamilton, where the Ticats aim to avenge their Grey Cup loss in 2019 (Photo: Ticats.ca)

We haven’t seen Masoli on the field since Week 7 of the 2019 season. That’s when Hamilton’s franchise quarterback sustained a season-ending knee injury and was replaced by Dane Evans for the rest of the year. As of right now, both Masoli and Evans have been given equal treatment at training camp as part of a battle that offensive coordinator Tommy Condell is letting develop “organically.”

Regardless of who starts Week 1, though, it’s safe to say we’re going to see Masoli’s return to action at some point in 2021. How the former East Division Most Outstanding Player performs is the big question. The last time we saw Masoli, he had cemented himself as one of the CFL’s elite quarterbacks after patiently biding his time for a number of seasons. With extra time to recover from a major injury and an elite supporting cast, I can’t wait to see if Masoli is back to that form this season. 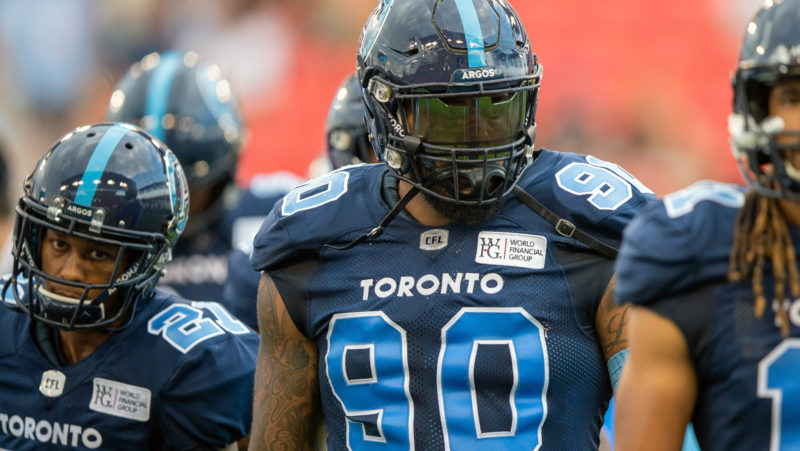 After signing with Ottawa in 2020, Cleyon Laing could help spark some change for the REDBLACKS in 2021 (Geoff Robins/CFL.ca)

Ottawa’s signing of Laing was one of the big coups of 2020 free agency but admittedly got lost in the shuffle with all the activity one year later. It shouldn’t have, though, as Laing’s addition to the REDBLACKS’ front four is massive. The 30-year-old Canadian defensive tackle instantly solidifies a promising line poised to be a big key to Ottawa turning things around after a frustrating 2019.

Laing is coming off a dominant season with Toronto where he racked up seven sacks from the interior in 15 games. Having that type of disruptive force in the middle will only help defensive ends like newcomer Frank Beltre and the returning Avery Ellis, who’s coming off a breakout season. Laing is already a Grey Cup champion with Ottawa going back to 2016, but that was a short-lived stint. His second go-round with the REDBLACKS is poised to make a much bigger impact.

With training camps in full swing and teams rolling out intra-squad games to get into game shape for the season, a few storylines have caught my eye:

• Edmonton quarterback Trevor Harris is reportedly in incredible physical shape, which is right on par with how he’s looked on the field so far. Harris is coming off a great first year with the Elks that was derailed by injury. 2019 was a solid first step and with his supporting cast, Harris is an MMQB pre-season favourite for Most Outstanding Player.

• So far, so good for Paxton Lynch in Riders’ training camp. According to multiple in-person reports, the former Denver Broncos pivot has looked right at home in the battle for the No. 2 spot on the Saskatchewan depth chart. Lynch is in the mix with the returning Isaac Harker and newcomers Tom Flacco and Mason Fine. If Lynch wins the job, he’ll be an interesting secondary option behind Cody Fajardo.

• Even with Winnipeg signing veteran Tyler Crapigna, rookie Marc Liegghio has impressed in both kicking and punting duties thus far. The Bombers are entering 2021 without Justin Medlock, one of the best of all-time in both disciplines, which puts a ton of pressure on Liegghio, a 2020 fifth round pick. According to reports, Liegghio has been accurate in the field goal department and has been pounding the ball at punter.