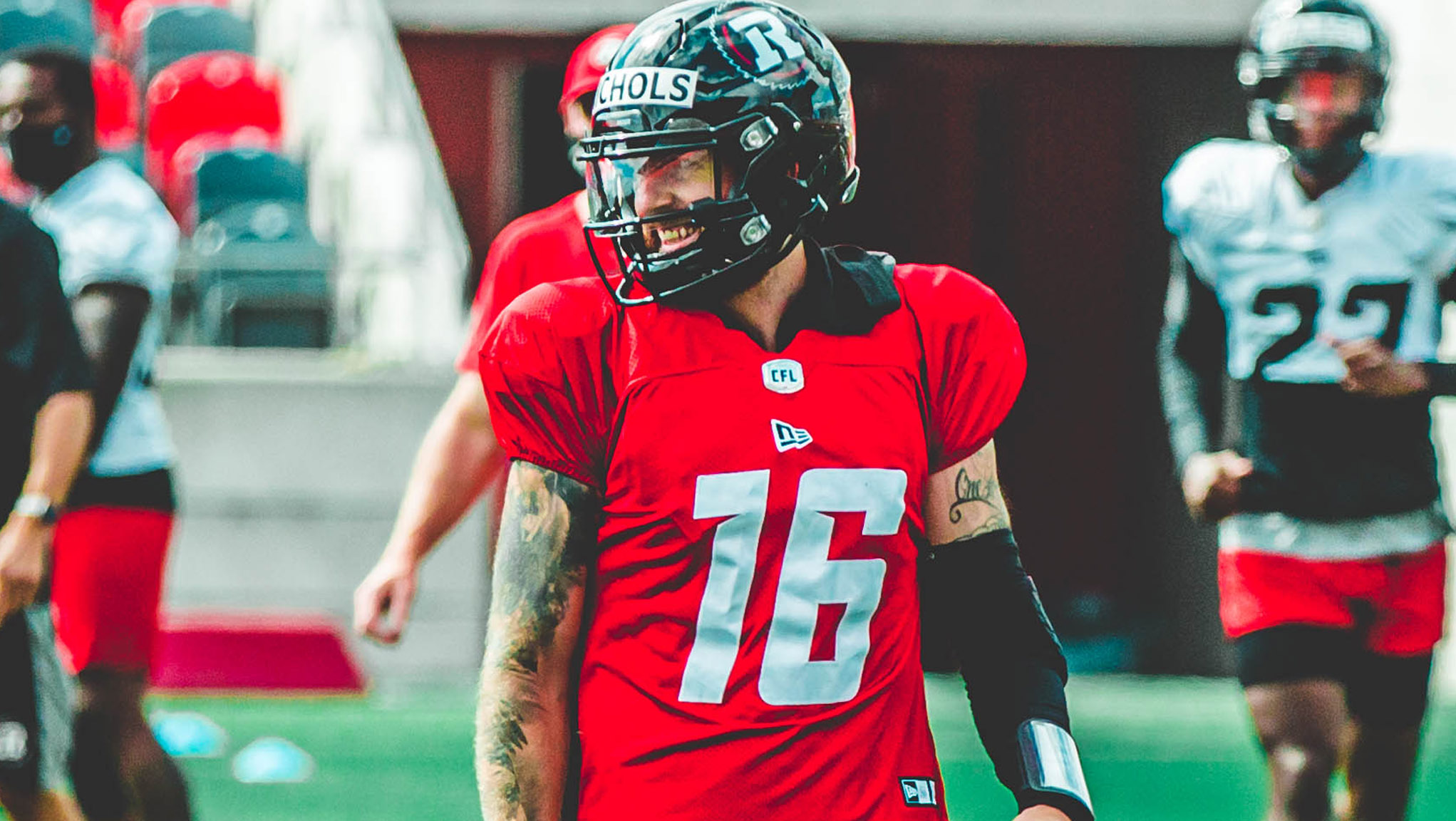 You think Matt Nichols is pissed off?

Doubted, questioned and discarded time and again, do you think the veteran Ottawa REDBLACKS’ quarterback has a scalding cauldron of bitterness in his belly?

You think he’s continually seething over the slights, over all the “yeah buts” he’s heard over the years and the ones that have surfaced again as he embarks on a new season with a new team?

How much of that sits in the pit of his stomach, waiting to surge like a little acid reflux?

“None,” says the 34-year-old veteran, flatly, coolly. He almost sounds bored with the question, and he might well be.

“I’m a 12-year vet,” say Nichols, who’s thrown for 18,363 yards and 108 touchdowns over the course of his career, the bulk of those numbers being bolstered during five years with the Winnipeg Blue Bombers.

“I’ve done a lot of great things and whoever wants to talk can talk,” he says, dismissively. “I’m the one out there doin’ it and grinding.”

Nichols is on the line from Ottawa, making the media rounds, having just completed the final day of REDBLACKS’ training camp.

He’s sounding the way Matt Nichols usually does, positive and determined, but there is a tinge, I think, of weariness.

It might just be the rigours of camp. Might be a little something else, though, and I think I find out what that might be when I ask him if it bothers him that his team is generally being regarded as an afterthought in the East by a fair number of prognosticators and evaluators.

“Honestly I don’t ever hear any of that besides when one of you asks me about it,” he replies.

The underlying message seems clear enough; Matt Nichols is not hosting negativity. But he’ll politely, grudgingly deal with it when it is presented to him by the media.

He must be pretty sick of it all by now.

That’s fair enough. But so is curiosity and Nichols thoughtfully engages in more questions about being doubted, either as a team or as an individual.

After all, it’s a central pillar in the storyline of Nichols, who has repeatedly come back from serious injuries — beginning with a terrible leg fracture suffered in 2012 when he was with Edmonton — to put up steadily improving numbers until the point where he was regarded as Winnipeg’s main man.

The 2019 season, though, was looking more and more like 2017 when disaster struck for the native of Redding, CA.

Nichols led the Blue Bombers to first place in the West at the halfway point, looking very much like a 4,000-yard quarterback once again, firing 15 TD passes against just 5 interceptions.

But his season came to an end in Week 10, his throwing shoulder badly damaged when sacked during the late stages of a game against the BC Lions. He’d need surgery to repair it and while that was happening, the Bombers went on to win the Grey Cup with Zach Collaros primarily at the QB controls. 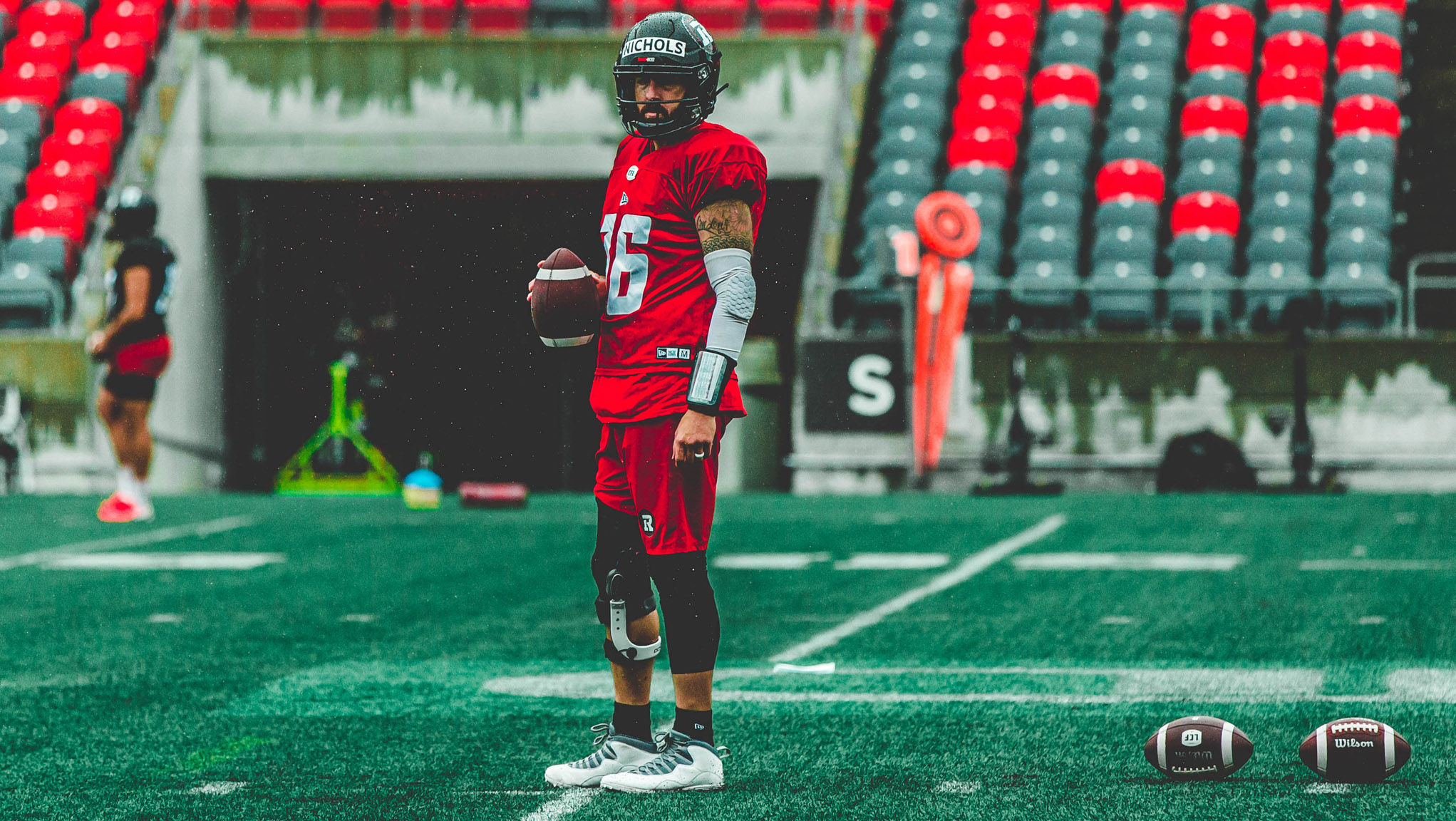 Matt Nichols was putting a masterful season together in Winnipeg in 2019, before a shoulder injury brought everything to a halt for him. OttawaREDBLACKS.com

In the off-season, Winnipeg decided to offer Collaros — another QB plagued by long stays on the injury list — a new deal, rather than Nichols.

Nichols signed with the Toronto Argonauts, who turned around and released him a year later in order to make way for Nick Arbuckle.

All the while, Nichols has been repeatedly doubted for his physical durability (which is different than toughness; no one could ever question that) and doubted over his status as a big-time, No. 1 quarterback that can create big moments.

Game manager, many have said and Nichols even had a hat made that carried that two-word backhanded compliment on it, which he sported during the 2019 season.

That stuff burned him, it was quite apparent for all to see. And it burned his loyal teammates, who had his back while he was in Winnipeg, their snarly rebukes of the critics covered by the thinnest of veils, if they were covered at all.

Nichols admits he was bothered, but insists he’s done with all that, now.

“Maybe in the past, you have those emotions and things you have to deal with,” he offers, pausing to collect his thoughts. “But… I’ve been through, I think, every single thing a professional athlete can go through and my mindset has changed.

“My main focus is just putting my best effort out there for my teammates every week. That’s all I care about. And havin’ some fun.”

It’s been happening, again, this questioning of Matt Nichols. With him resting his surgically-repaired shoulder regularly during training camp, the critical voices rose up, the open doubt about his physical readiness quite apparent.

Much ado about nothing, says Nichols, who was said to be ready to play even last year when he was property of the Argos.

He insists it was merely a question of getting his arm and shoulder used to a bigger load after a long, long layoff and after throwing just three times a week over the last year.

“It’s a volume thing,” Nichols explains. “A double day for us is four-and-a-half hours on the field, throwing non-stop. There’s just no way to replicate that (when not at camp).”

“Normally, that happens every six months for you,” he says of the usual absence from a training camp’s demands. “And it’s been close to two years for everyone going through that. You’ve seen quite a few quarterbacks taking a few days off here and there around the league.”

So there’s nothing to worry about? He’s good to go as the season dawns?

“Yup,” Nichols replies. “I had a great last couple of days of camp and the arm’s feeling great. I just needed a bit of rest and I’m feeling good now.”

As the conversation wraps up, I offer Nichols one more opportunity to reveal any pent up frustration that might be evident. Released by the Blue Bombers. Released by the Argos. The “yeah, but” and “game manager” people.

I mean, doesn’t he just feel like taking a page out of the book of another Ottawa quarterback named Henry Burris and telling them all to shove it?

“No, I don’t,” is his categorical reply.

“I want to have fun playing football and I want to have a great journey with my teammates this year. That’s all I care about. Everyone else can say what they want to say. That’s what sports provides for people. None of that affects me in any way.”

If Matt Nichols is pissed off, it appears he’ll be keeping that to himself this season.

This new lease on football life comes with some familiar comfort for Matt Nichols.

With Paul LaPolice handling the head coaching duties for the REDBLACKS, the veteran QB is reunited with his offensive coordinator from Winnipeg.

“LaPo’s kind of putting his stamp on the team,” says Nichols, and you can tell by his tone that he welcomes that. “He just does an excellent job of teaching football IQ.”

As for his new teammates, Nichols says he’s been more and more pleased with the bunch as training camp has proceeded.

“It was a great surprise to come in here and see that there’s 10-12 just great leaders that are good people, hard workers,” he says.

“I think that we have a lot of talent on this football team. A lot of good people here, a great coaching staff. All those things are recipes for success and now it’s just on us to go out each and every week and
play well.”