This time of year — even when it falls later than he’s used to — always feels special to Randy Ambrosie.

Whether he was a rookie right tackle with the Calgary Stampeders in 1985, or today, when he’s the 14th commissioner of the CFL, those days between training camps ending and Week 1 of the season kicking off are a great time for reflection and excitement.

“Going back to my rookie season…I was fortunate. Not only did I make the team but then I was told I was going to be the starting right tackle for the Stampeders. It’s impossible to describe the joy that I felt,” Ambrosie said.

“It wasn’t just my joy. It was my family and everyone around me who had been a part of my journey. Breaking training camp in ’85 and knowing that I was going to have a chance to live this dream, it’s just really hard to put into words how much joy I felt.”

Thirty-six years later, Ambrosie is in a similar joyous mood. The CFL kicks off the 2021 season on Thursday, awakening from a 621-day slumber brought on by the pandemic. The cancelled 2020 season was devastating on a number of fronts for the league, its teams, players and fans.

“There’s a tremendous parallel to what I’m experiencing today,” the commissioner continued.

“I think about these young men who, whether they’re going to play their first season in our league or their fifth year or their 15th, I know they’re all looking forward to competing. And that’s a joy. Of course all of our coaches and our team personnel and league personnel and everybody, really. Our fans who have just really suffered in the absence of our game. I’m just really, frankly, happy for everybody today.” 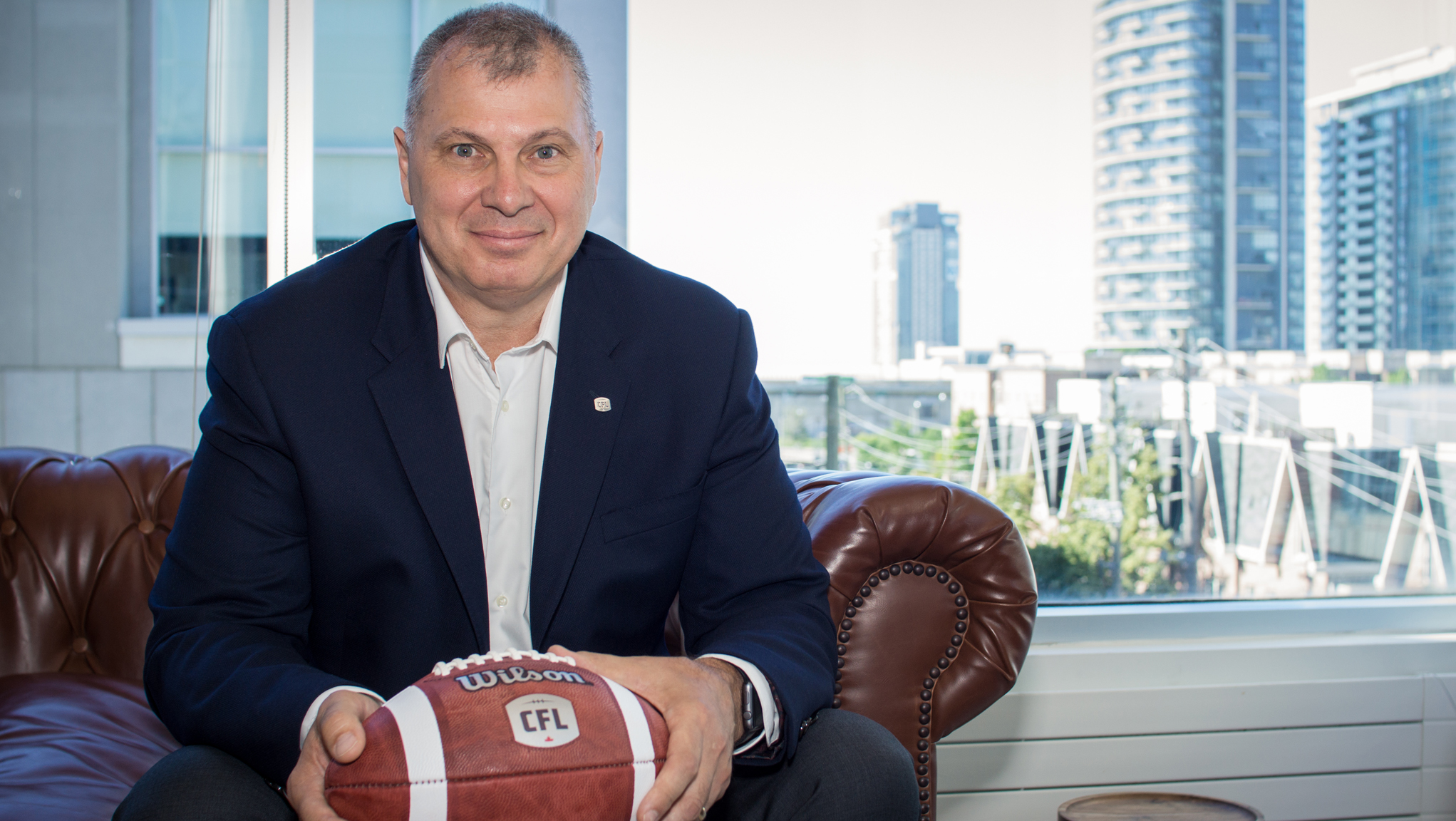 As the league gets back to action on Thursday night, Randy Ambrosie’s focus is on growing football in Canada and finding ways to grow the CFL (Photo: CFL.ca)

Chris O’Leary: I imagine when you took this job you felt like you were ready for anything, but nobody could have predicted what the last year-and-a-half would have been like. What’s it been like to be the commissioner at the helm for this period and go through some really difficult things? Now that we’re starting to see some normalcy, when you’re at this point how do you reflect on this time?

Randy Ambrosie: It’d be dishonest to say that it’s been anything but challenging. There’s been a lot of stressful times. I felt all along my responsibility to the teams, to the players, to the fans, to all of our staff.

We were all living in this world of great uncertainty and the responsibility is great. It wasn’t always fun. There were a lot of days you woke up and your head was a lot heavier on the pillow in the morning. But I’ve been around this league my entire life and I believe in it and I believe in its future.

I kept reminding myself that, yes, we’re in the middle of a crisis and nobody could have told me that this would be part of the job, but it hasn’t dissuaded me one iota from my belief in our future. Today, I’m incredibly bullish. We’ve learned a lot. We’ve grown as a league, some new opportunities have emerged as a result of changes that have we’ve made and some changes that the marketplace has made. I actually think today the future has never been brighter, never been brighter for our league. And that’s exciting.”

CO: As we move forward, what does your focus go to? So many of us have been in survival mode through this time. You mention opportunity and seeing a bright future, what do you want your next steps to be?

Today it’s not a lot different. I mean, (we’re here) with a little more scar tissue and a few more bumps and bruises, but also with a better understanding of the league and the game. What I’m convinced of is that the future has never been brighter. We do have a lot of work ahead of us, but it’s there for the taking and that’s what I’m committed to.

“We need to be big, we need to reach for the opportunities that are available now and ones that will be available. Part of the conversation with the XFL was about thinking big, about reaching beyond our grasp.”

— Commissioner Ambrosie on the CFL’s recently concluded talks with the XFL.

CO: Part of that discussion around growing the league led to the talks you had with the XFL this year. The league recently announced that those talks had ended. How would you characterize those conversations?

RA: I think in some ways, in many ways really, it was a very positive discussion. One thing that we can take away from that is that it was a big idea. And now, it didn’t work out. But it is my view and I think the view of many on our board of governors, and I hope all really, that we need to think big. We need to be big, we need to reach for the opportunities that are available now and ones that will be available. Part of the conversation with the XFL was about thinking big, about reaching beyond our grasp. That part, I think, is actually a really positive takeaway.

Look, they’re nice people. They’re passionate about the game of football. There were a lot of parts of that conversation that we can look at too, as opportunities to learn. We picked up some ideas along the way. We enhanced some of our own ideas. I don’t view it as negative, I view that as a positive. I think now, we know what we want. We want to grow our league. We want to take football to a much better place, we want to strengthen the entire foundation of the game. In fact, I’d say in so many ways that conversation with the ownership group of the XFL just energized this. I’d say I would give it high, positive marks.

CO: We’ll go into Week 1 with games in the West and attendance numbers will vary from full capacity to 15,000 as we head East as the season goes along. Having fans in the stadiums was a major sticking point for teams as the return to play plan was worked on this year. How happy are teams and their ownership groups with what they’ve got right now?

RA: I think everybody is just thrilled to be getting back to football. Our league, you know, we need the fans, we want the fans. The fans have always been and will always be a huge part of our league. It’s why we’re a part of the fabric of the country.

We’re optimistic that…in Ontario as an example and in Quebec, where we’re starting at 15,000 we’re hoping and expecting that those numbers will increase as we go into the season. As we head toward Grey Cup in Hamilton, we have high hopes it will be a sold-out, full capacity celebration of all that makes Canada great.

I think everyone’s thrilled. Obviously we’re watching carefully. We’ve got all of our COVID protocols in place, we’ll be vigilant. We’ve got a great partnership with the players on doing everything we can to keep our football and player personnel and everyone in the league safe. But we do have high expectations that the numbers are good to start and they’ll get better as we go through the season.

CO: What will this year look like for you in terms of travel? How much will you be able to get out to stadiums? Do you want to do that?

RA: I think like everybody else, I’ve been thinking a lot about it. I’m going to be in Winnipeg for the kickoff of the season on Aug. 5 and that’s going to be the beginning of a lot of football.

I am planning on being in stadiums. Brian Ramsay of the PA and I are going to watch the game together. We felt that it was an important message to send to everyone, that the players and the league are going to work together. Brian and I are even talking about how many games and times we can meet throughout the season, get together to watch a game and just talk about the future of the league together.

I’m planning on being very active and I’m going to respect our league protocols, which is to say I won’t be in the Tier 1 group. I’ll nicely be in the Tier 2 group and doing everything I can do to be safe and healthy, but be very active because it is an important part of this job, to be a champion and a cheerleader for the CFL. And I plan on doing a lot of that this year.