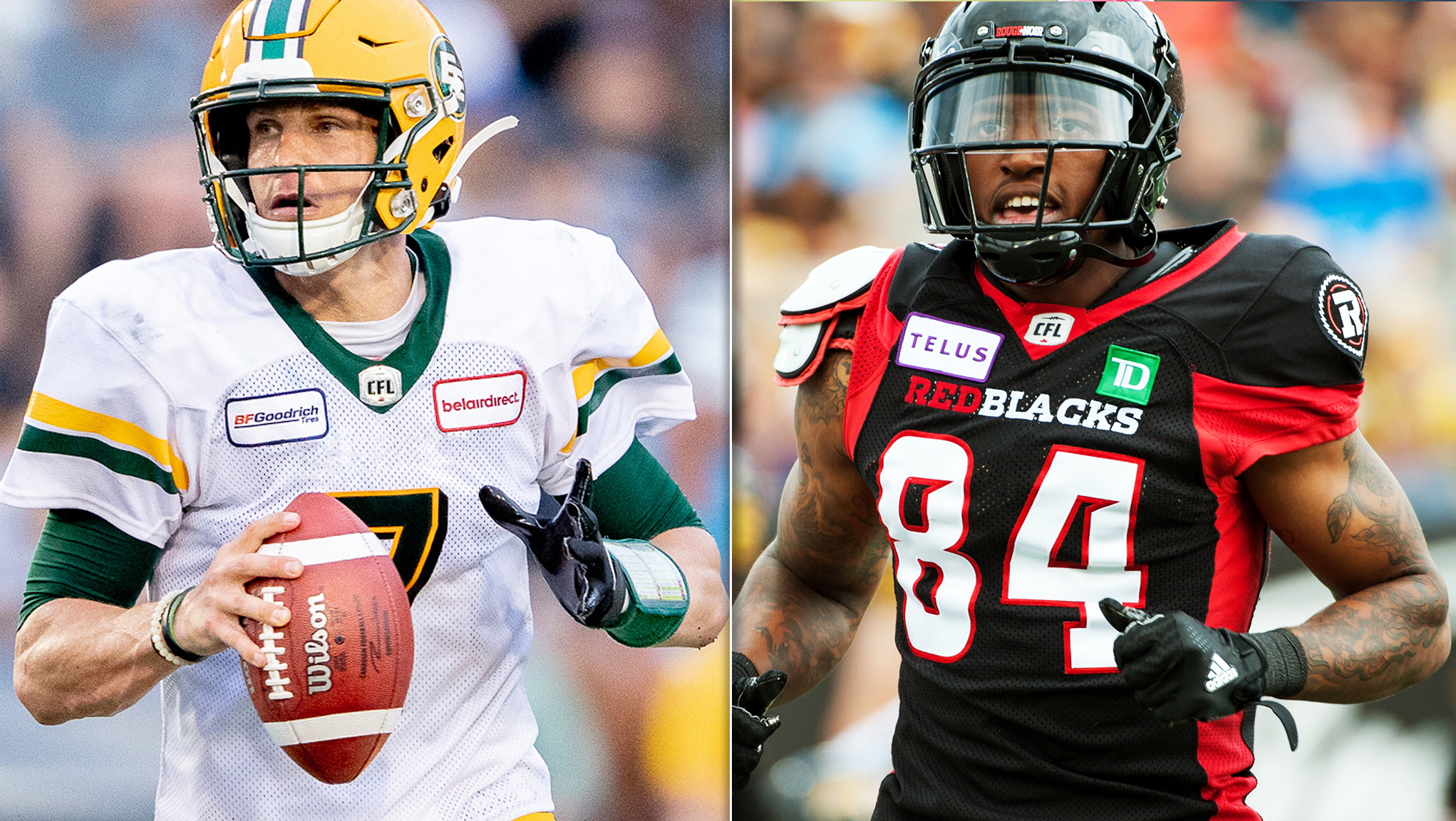 EDMONTON — Opening weekend of the 2021 CFL season will close out with the Edmonton Elks hosting the Ottawa REDBLACKS in a game that will feature new looks for both sidelines.

While the new uniforms for each of these teams do look fantastic, it is the coaching staffs that are being referred to. The Elks and the REDBLACKS each have new head coaches leading their benches for 2021.

The Elks sideline will feature Jaime Elizondo making his CFL head coaching debut. Elizondo spent two seasons in the nation’s capital as the offensive coordinator of the REDBLACKS from 2016-2018.

Elizondo’s arrival in Edmonton reunites him with offensive weapons Trevor Harris and Greg Ellingson, who have quickly become one of the most threatening passing combinations in the CFL.

Since 2016 Harris has completed 279 passes to Ellingson, accounting for 3,913 yards and 20 touchdowns, making them the top ranked quarterback-wide receiver duo in the league over the last four seasons.

The off-season additions of Derel Walker and Armanti Edwards only make the Green and Gold passing attack more dangerous. With Walker and Edwards joining Ellingson in Edmonton, this gives the Elks three receivers who totaled over 1,000 yards in 2019.

With a collection of wide receiver talent such as the Elks have, many might be expecting a fast start on Saturday. Elizondo on the other hand, wants his team to focus on control.

“It’s about solving problems as you go through the game and making adjustments,” Elizondo told members of the media. “Everybody wants to start fast, but I think for us you have to focus one play at a time.”

Should the Elks offence start too slow or give up an early turnover, their defence will certainly be there to help them out.

Edmonton’s defensive unit was one of the best in the league the last time we saw them on the field. They forced a league leading 102 two and outs in 2019, and were amongst one of the toughest teams to move the ball on, surrendering an average of just 289 yards per game.

On the backend of their defence, the Edmonton secondary is full of playmakers and have been among the hardest teams to throw against, giving up an average of just 222 passing yards per game.

For veteran defensive back Aaron Grymes, the key to success for the Edmonton secondary has been selflessness.

“We’re selfless, I don’t care who makes the play as long as it gets made,” said Grymes. “That selfless attitude, I think is going to go a long way for us this season.”

The off-season acquisition of Jonathan Rose provides veteran leadership and instinctive ball-hawking ability for the Elks defensive backfield. In four seasons Rose has nine interceptions, two of which he was able to convert for touchdowns.

After a scary neck injury sidelined Rose in 2019, Saturday will mark his first game in 25 months. To add fuel to an already sizeable fire, in his return to the field, Rose will be matching up against his former team.

“From the first quarter to the fourth quarter, until the fourth quarter strikes zero, anything goes,” said Rose. “If I look at those guys as friends or allies, then I might not play my best game, so once that whistle blows to kickoff, I don’t know those guys.”

While the Edmonton Elks look to be a tough task for any team to handle, the Ottawa REDBLACKS may have the perfect solution.

On Saturday, Ottawa fans will finally see the long-awaited debut of their new head coach, Paul LaPolice, whose offensive creativity helped the Winnipeg Blue Bombers capture the Grey Cup in 2019.

Joining LaPolice in Ottawa will be his long-time quarterback, Matt Nichols. With LaPolice as his offensive coordinator, Nichols has amassed 13,220 passing yards and 79 touchdowns.

The combination of Nichols and LaPolice provides optimism for downfield passing efficiency and red zone scoring. Nichols was one of the most effective quarterbacks inside the 20 last season, hitting on 22 of his 27 passing attempts while throwing eight touchdowns.

“Matt is a competitor’s competitor,” said Elks defensive back Aaron Grymes. “He competes, he plays with a chip on his shoulder and that’s what I think makes him so special.”

However, Nichols will be without two of the REDBLACKS’ top receiving options from the 2019 season. Dominique Rhymes found himself with the BC Lions in the off-season, while Ottawa legend, Brad Sinopoli announced his retirement prior to the start of the season.

Together Sinopoli and Rhymes accounted for 1,727 passing yards and eight touchdowns for the REDBLACKS. While these are big pieces to lose, Ottawa still has solid talent at the receiver position. Third year receiver RJ Harris looks more than ready to take over the number one spot for Ottawa.

With the departure of Sinopoli and Rhymes, Harris will certainly be given the opportunity to be a major contributor in the Ottawa passing attack.

Electricity is in the air in Edmonton, as football finally returns to Commonwealth Stadium. Fans will be energized and there will be a lot of excitement at on Saturday night. However, both teams are determined not to get ahead of themselves, and they will be keeping the focus on taking the game one play at a time.

Kickoff is slated for 10:00 p.m. ET on TSN and ESPN2 or can be followed along on CFL.ca’s Game Tracker.