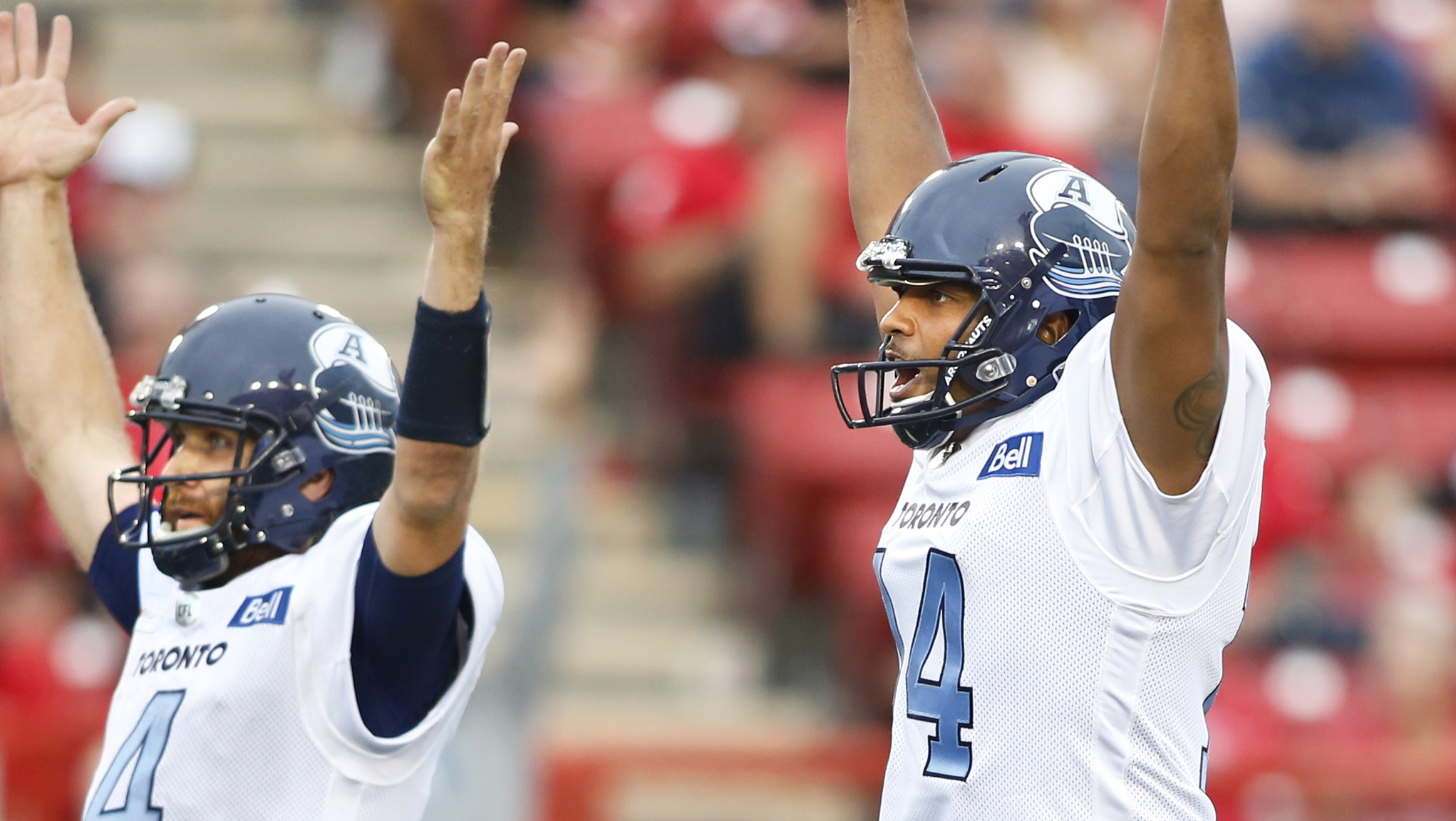 CALGARY — The Toronto Argonauts had a massive fourth quarter, coming back from behind to defeat the Calgary Stampeders on Saturday night.

McLeod Bethel-Thompson and co. had an excellent start to the game, scoring a touchdown on their first drive but were unable to find the end zone again until the fourth quarter. But that’s when it mattered most, and with a late-game major score and a clutch field goal, the Argos were able to defeat the Calgary Stampeders 23-20 at McMahon Stadium.

Kurleigh Gittens Jr. scored the tying touchdown in the fourth while Boris Bede kicked the game-winning field goal from 32-yards out. Shaq Richardson had an interception on the Stampeders final drive to seal the deal with 20 seconds left in the game.

Bethel-Thompson finished the evening connecting on 26 of 37 passes for 354 yards and two touchdowns. Ricky Collins Jr. led all receivers with 126 yards.

Bo Levi Mitchell connected on 23 of 35 passes for 252 yards, one touchdown and one interception in the loss. Kamar Jorden hauled in all five passes thrown his way for 85 yards and a major score.

RELATED
» Through the Lens: Argonauts at Stampeders
» Boxscore: Argos, Stamps by the numbers
» Bethel-Thompson: ‘We found out we have heart today’

Following Mitchell and his Stampeders two-and-out to start the game, the Argonauts made quick work of Calgary’s defence and scored on their first possession.

Bethel-Thompson moved the chains 97 yards on 13 plays to set up former Stampeder Juwan Brescacin’s first touchdown of the 2021 season, as Ryan Dinwiddie and his Argos got off to a hot start.

The Argos pivot connected on all eight of his passes on the way down the field, spreading the ball around to four different receivers (Brescacin, Daniel Braverman, Ricky Collins Jr., and Llevi Noel) and running back, John White. White then plunged in to score the two-point convert and the Boatmen took an early 8-0 lead.

When the Stampeders got the ball back, Mitchell and his offence found a groove, moving 67 yards down the field and into the red zone as the first quarter came to a close. They had to settle for a field goal, however, as the Argos defence got the stop to begin the second frame. Rene Paredes was good on his 20-yard attempt and cut Toronto’s lead to 8-3.

Aided by a pass interference penalty called on Argos DB Robertson Daniel, who got his hands on the intended receiver Josh Huff, and a successful third down conversion, the Stampeders scored their first touchdown of the contest late in the second quarter.

It was Kamar Jorden who hauled in Mitchell’s pass for the score, capping off the 13-play, 70-yard drive. Markeith Ambles scored the two-point convert, giving Calgary an 11-8 lead.

Following a Toronto two-and-out, Calgary’s special teams unit got in on the action, continuing the momentum swing for the home team. Charlie Moore got his hands up and blocked Boris Bede‘s punt, putting Mitchell and co. in scoring position inside the 20-yard line at the three minute warning.

They cashed in with three more points as Paredes booted a 22-yarder to extend Calgary’s lead to 14-8.

Toronto’s next possession was littered with penalties for both teams, but the Argos were able to get themselves into field goal range. After missing his 58-yard attempt earlier in the quarter, Bede was good this time from 54 yards out, cutting Calgary’s lead to 14-11.

Calgary was held to a two-and-out on their next drive, as the seconds ticked off the clock and half time was getting closer. Toronto moved down the field, aided by two big pickups from Eric Rogers (15-yard gain) and Noel (21-yard gain). Bede looked to tie things up from 27-yards out but missed his field goal attempt as the first half concluded.

To start the second half, Collins Jr. hauled in the first pass of his team’s possession and took off down the field. He was closing in on the end zone but Stamps defensive back DaShaun Amos punched the ball out of the Argos receiver’s hands and D.J. Killings recovered it, bringing Mitchell and co. onto the field.

The drive was all Kamar Jorden, as he hauled in three passes including back-to-back catches for 49 and 14-yard gains along with a seven-yard catch, setting up what looked like his second touchdown of the evening. However, Toronto challenged that there was a penalty on the play and it was successful, bringing up third down once again. Mitchell looked for Colton Hunchak in the end zone, who was unable to haul in the ball for the score.

It wasn’t over yet, though, as the Stampeders challenged that there was pass interference on Hunchak, but the ruling on the field stood and Calgary turned the ball over on downs.

With four minutes left in the third, the Stampeders scored the first points of the second half, adding another three points to their total. Paredes made his 15-yarder, giving Calgary a five-point lead (17-12).

In what was a slower moving half than the first, the next points were once again from the Stampeders. They had hoped to get a touchdown but had to settle for a field goal following a seven-play, 57-yard drive. Paredes remained perfect on the evening, connecting on his 30-yard attempt to extend his team’s lead to 20-12.

Calgary’s defence was flexing their muscles on Toronto’s next drive, forcing the Argos to their third-straight two-and-out. But Toronto’s defence was up to the task as Charleston Hughes recovered a Ka’Deem Carey fumble and Bethel-Thompson was right back on the field and in scoring range inside Calgary’s 30 yard line.

The Argos took advantage of the turnover, as Bethel-Thompson tossed a 27-yard touchdown strike to Gittens Jr. With Eric Rogers hauling in the two-point convert, Toronto tied things up at 20 with eight minutes left in the contest.

There were just two minutes left in the game and the Double Blue drove down the field to set up Bede’s 32-yard field goal, giving Toronto a three-point lead.

With 31 seconds left on the clock, Mitchell and his Stampeders took the field looking to flip the script. But it was Shaq Richardson who picked off Calgary’s pivot to seal the deal for the visiting team.

Next up for the Stampeders is a matchup with the BC Lions on Thursday while the Argonauts head to Winnipeg to take on the Blue Bombers Friday night.