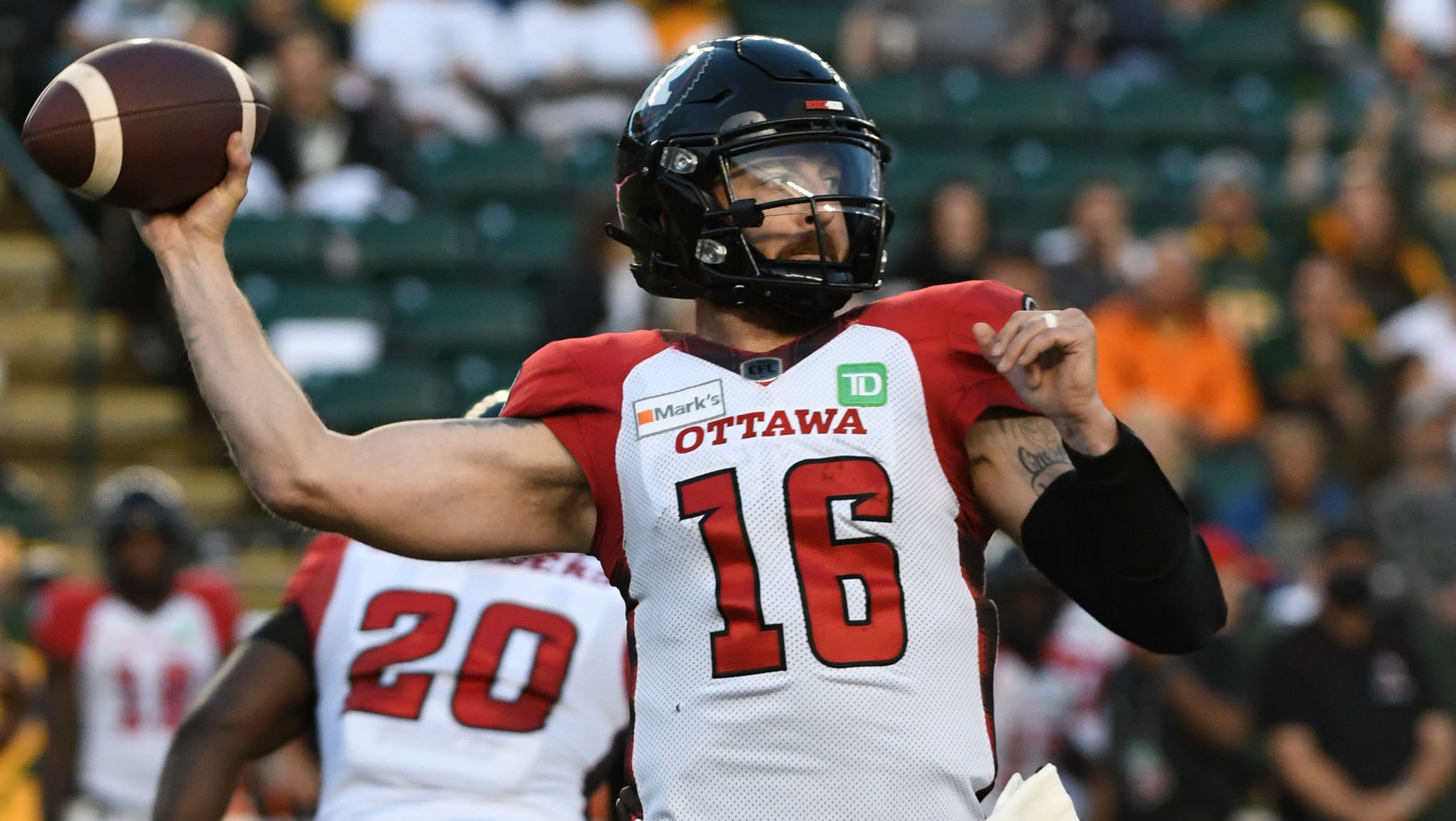 EDMONTON — The quarterback battle between Trevor Harris and Matt Nichols that many fans had anticipated gave way to a defensive showdown instead on Saturday night, with Ottawa scoring a 16-12 season-opening win.

Abdul Kanneh‘s 102-yard pick-six took what would have been an Edmonton touchdown literally out of team’s hands and back the other way, helping Ottawa shock a heavily favoured Edmonton team. Kanneh had two interceptions and had the game-saving tackle at Ottawa’s one-yard line, giving head coach Paul LaPolice his first win at the helm of the REDBLACKS.

Harris made 33-44 passes for 333 yards, but couldn’t find the end zone all night and finished with three interceptions. In his REDBLACKS debut, Nichols was 12-20 for 71 yards with zero touchdowns but didn’t throw any interceptions.

Edmonton’s highly-anticipated offence worked its way down the field for its first drive of the night and had receiver Mike Jones been able to stay inbounds in the end zone, the team would have had a major to open the night. Instead, they got a 12-yard chip shot of a field goal from Sean Whyte to open the scoring at 3-0, 5:19 into play.

Not to be outdone by the veteran Whyte, Ottawa kicker Lewis Ward evened the game up from deep, with a 52-yard field goal at 12:22.

The REDBLACKS had a spectacular play called back in the early stages of the second quarter. Devonte Dedmon took a Hugh O’Neill punt and tossed it across the field to Ryan Davis, who bolted to Edmonton’s end zone. The play didn’t hold up under review, though and was ruled an offside pass.

While both offences tried to find their rhythms, the kickers stayed in control of the game. Whyte lined up a 52-yard field goal and put just enough on it to get it through the uprights, putting the Elks up 6-3 at 11:32 of the second quarter.

Ward sent a 21-yard field goal home with 36 seconds on the clock to tie the game, but the Elks were able to get Whyte out on the field for another long range shot with two seconds on the clock. He made a 48-yarder look easy and gave his team a 9-6 lead at the half.

Whyte continued to provide the Elks’ offence in the third quarter, with a 43-yarder at the 4:40 mark. While the defences continued to keep their opponents in check, Ward helped Ottawa narrow the lead. His 51-yard field goal made it a three-point game, at 12-9, 1:14 into the game’s final frame.

Just when Edmonton’s offence seemed to on the verge of a breakthrough, the theme of the night struck back in a resounding way. Harris was intercepted by Kanneh at Ottawa’s eight-yard line and he ran it back 102 yards for the game’s first touchdown and a huge momentum swing for the REDBLACKS. Ward’s convert made it a 16-12 Ottawa lead at 5:03.

Ottawa’s defence struck again with 3:15 left to play. Harris got the Elks back to Ottawa’s 20-yard line when Randall Evans intercepted him, keeping the REDBLACKS in control late in the game.

Harris engineered one final drive and got Edmonton to Ottawa’s 17-yard line with seven seconds left. He found fullback James Tuck but he was brought down, fittingly by Kanneh at the one-yard line, sealing the win for the visiting REDBLACKS.

Edmonton managed decent offensive numbers, with James Wilder Jr. rushing for a game-best 89 yards while adding 72 receiving yards. Derel Walker had 98 yards in his return to the Elks, but Ottawa’s defence owned the biggest plays on the night.

Next up for the Elks are the Montreal Alouettes, who travel to Edmonton on Aug. 14. After their hard-fought defensive win, the REDBLACKS get to enjoy a bye week.