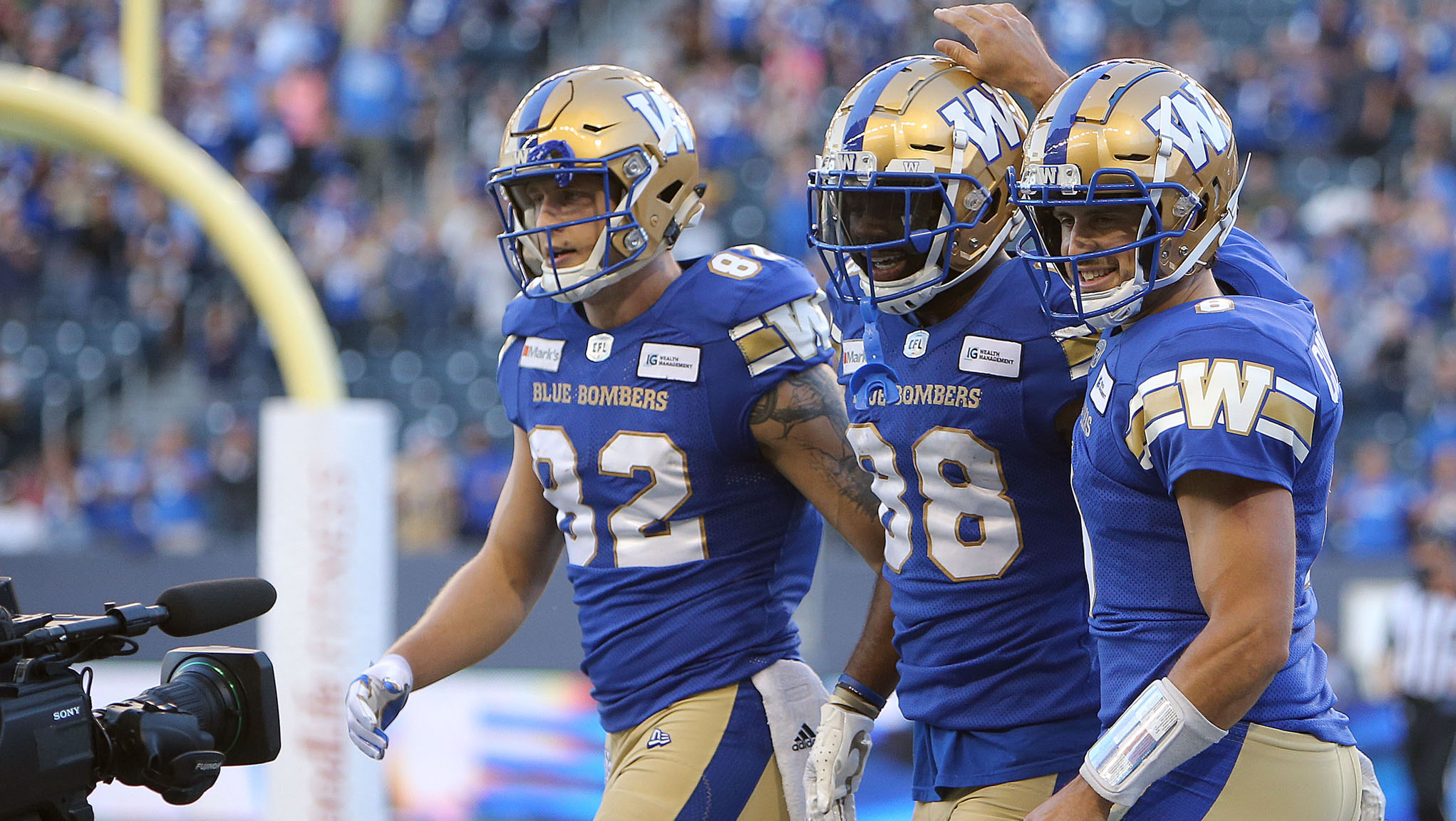 TORONTO — With two weeks’ worth of games behind us, the standings aren’t exactly aligning with what the pundits might have seen in their pre-season predictions. Some of the names we’ve grown used to seeing high up on the power rankings list have slipped downward with their records. The cream (read: winners) always rises to the top and it’s no different in this week’s edition of our rankings. If we thought it’d take offences a couple of games to find their collective strides, we should see start to see more chemistry and hopefully points on the board as a result. A 0-2 start isn’t the end of the world, but in a shortened season, it does make for more serious ground to be made up. Here’s the lay of the CFL land as we head into Week 3.

There’s a lot to love in Winnipeg right now. Zach Collaros is fourth in the league in passing yards (509) and has thrown four touchdowns to one interception, while showing that he’s got a talented receiving corps at his disposal (reminder that we haven’t even seen Andrew Harris yet). If you look to the other side of the ball, the Bombers’ defence has allowed all of 13 points through two games. This week in Toronto we get to find out how this Bombers team travels.

The Riders’ game plan in Week 2 was a simple-sounding one: Force turnovers, make the opposition pay, send the home crowd into hysterics, repeat. Remember all of the pre-season worry about how the Riders’ depth might be impacted by that horrible rash of injuries? This is a good and it turns out, deep team. When your only gripe about this group is penalties (20 for 187 yards), you’re in a fairly good spot.

The Als came out of the bye, after a cancelled season, etc. etc. and looked like they hadn’t missed a beat from their inspiring 2019 campaign. Head coach Khari Jones got big contributions from all three phases in a convincing win over the Elks. Like the Riders, the Als were hindered by penalties — Almondo Sewell‘s roughing the passer call cost his team a pick-six — but were in control of their debut on the road.

Another week, another last-minute QB switch but this time, the Lions got a win in Calgary. Michael Reilly looked like his old self (26-33, 342 yards, one rushing TD), slinging the ball and running to open space when he needed to, which is a big relief for Lions fans. Also a relief: The Lions’ defence and the six turnovers it racked up, including a career-worst four Bo Levi Mitchell interceptions. That warranted the Lions’ big jump to us.

No, McLeod Bethel-Thompson didn’t produce the same magic he did in Week 1 and yes, he was benched after missing a would-be touchdown when his team needed it. Lost in the benching, though, was that McBeth and the Argos went up against arguably the toughest defence in the league. The Argos still made plays on defence and showed that they’ve got some run game, once they got the ball in John White’s hands. This is a very interesting team.

We enter into the double-take portion of our rankings. What are the Stamps doing here? They’re winless in two games at home and their offensive chemistry hasn’t made any significant improvements yet. With reports that Canadian QB Michael O’Connor could get the start on Friday against the Alouettes, the offence could be lacking continuity against a tough opponent.

We’ll say this about the Ticats, who are struggling in a similar manner to the Stamps: They’ve had it rough to start the season. Jeremiah Masoli — who hadn’t been on the field since the early portion of the 2019 season — might have faced the two toughest defences in the league on the road in back-to-back weeks. It hasn’t been pretty, with the Ticats only managing a pair of touchdowns through two games, but Orlondo Steinauer will make the most of his team’s bye week. Like the Stamps, there’s too much talent and the coaching is too good to not turn things around.

We pictured this fresh new logo higher up on the list out of the gate, but the Elks have had a severe case of the offensive yips and they’re suffering for it. For the second week in a row, Trevor Harris had decent numbers (19-29 passing, 223 yards, one touchdown) but his team didn’t have a lot to show for it on the scoreboard. Edmonton’s d-line sacked Vernon Adams Jr. once and the special teams unit allowed a return TD. There’s too much being surrendered and not enough taken with this team right now. Can it flick the switch on a short week against the Lions? They could use it.

The REDBLACKS emerge from their bye week rested and hopefully a little healthier at the QB spot, where Matt Nichols has dealt with arm soreness through training camp and into the first week of the season. We saw some big defensive plays from the REDBLACKS in Week 1. They’ll need some offensive help at a raucous Mosaic Stadium this week if they want to double their win total.