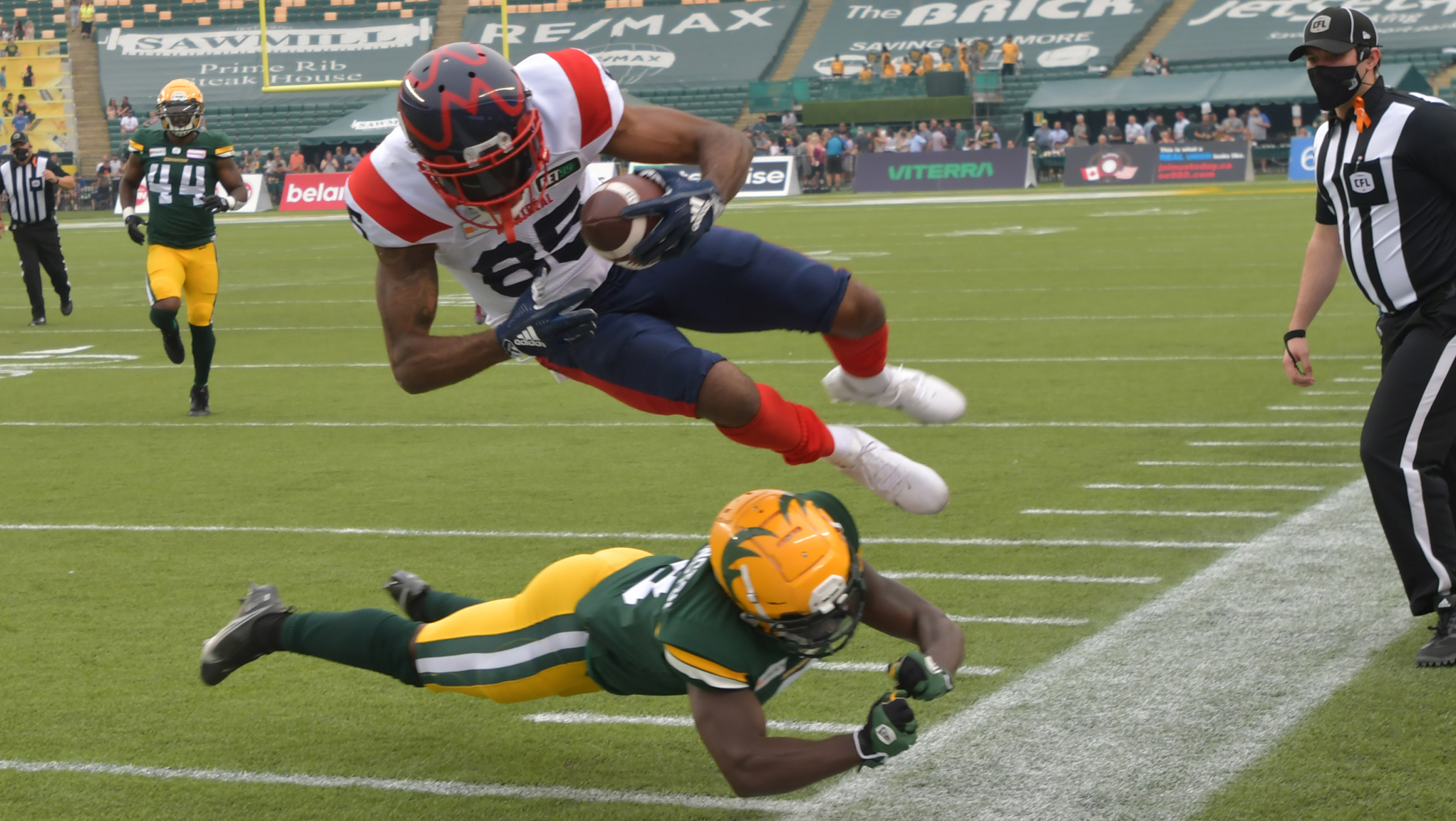 Low-scoring games have taken fantasy users for a roller coaster ride, while the slow starts of once-reliable mainstays like Trevor Harris, Bo Levi Mitchell, and Brandon Banks have only added to the confusion.

Week 3 should offer promise now that everyone has at least one game under their belts. This week should also see the possible 2021 debuts of running backs Andrew Harris and Shaq Cooper, along with the hopes of rebound efforts from Harris.

Seriously, the Lions’ defence is a strong value play, especially against an Edmonton offence that has struggled in the red zone while also being error-prone. BC leads the league with five interceptions and ranks third with five sacks.

The Lions have limited opposing pivots to a modest 67 per cent completion rate and have been just as productive against the run, allowing only 71 yards and 4.5 yards per carry.

Surely, there’s every chance that Trevor Harris ($10,119) can revert to his usual self on Thursday but now seems like a good time to ride the hot hand that the Lions’ defence has opened the season with.

Again, would anyone be shocked if Harris hangs 30-plus Fantasy points on the Lions? No, but are Fantasy users willing to take a chance on a quarterback who came within 118 seconds from
being shut out offensively in his first two games?

Harris’ 283 passing yards per game are a bit low considering the amount of firepower available to him. However, there’s a good reason why he and the Elks’ offence has sputtered: Edmonton’s O-line has allowed seven sacks in their first two games. The Elks’ pivots were sacked eight times the entire 2019 season. If the Lions’ D smells blood in the water early, it’s going to be another long night for Harris.

Cunningham looked like the 1,000-yard receiver he was in 2018 as he returned to the Als’ lineup. In Saturday’s win at Edmonton, the talented wideout had five receptions for 86 yards and his first major since Week 1 of the 2019 regular season.

Pivot Vernon Adams, Jr. ($10,686) only attempted 21 passes against the Elks, yet the fact that Cunningham received a third of Adams’ passes is a good sign he will be no worse than second to Eugene Lewis ($7,783) on Montreal’s receiving tree.

Cunningham has better value and will take on a Calgary secondary that has allowed a league-high 348 passing yards per game. This feels like a game where Adams will attempt north of 30 passes, so add Cunningham to your lineup and partake in the production.

There’s value in O’Connor at $5,000 but there’s a lot of risk in opting to go with an inexperienced backup at the same time, as he slides in for the injured Bo Levi Mitchell.

There is no Reggie Begelton, DaVaris Daniels, or Eric Rogers to throw it up to in Calgary this year, so O’Connor will be working with Markeith Ambles ($4,509), Hergy Mayala ($5,727), and Richard Sindani ($2,733). Needless to say in this situation, growing pains will be a reality. Even before Mitchell’s injury, Calgary’s passing game (eighth in completion percentage, sixth in average yards per pass) showed a clear sign for owners to avoid until it’s grown up a bit more. 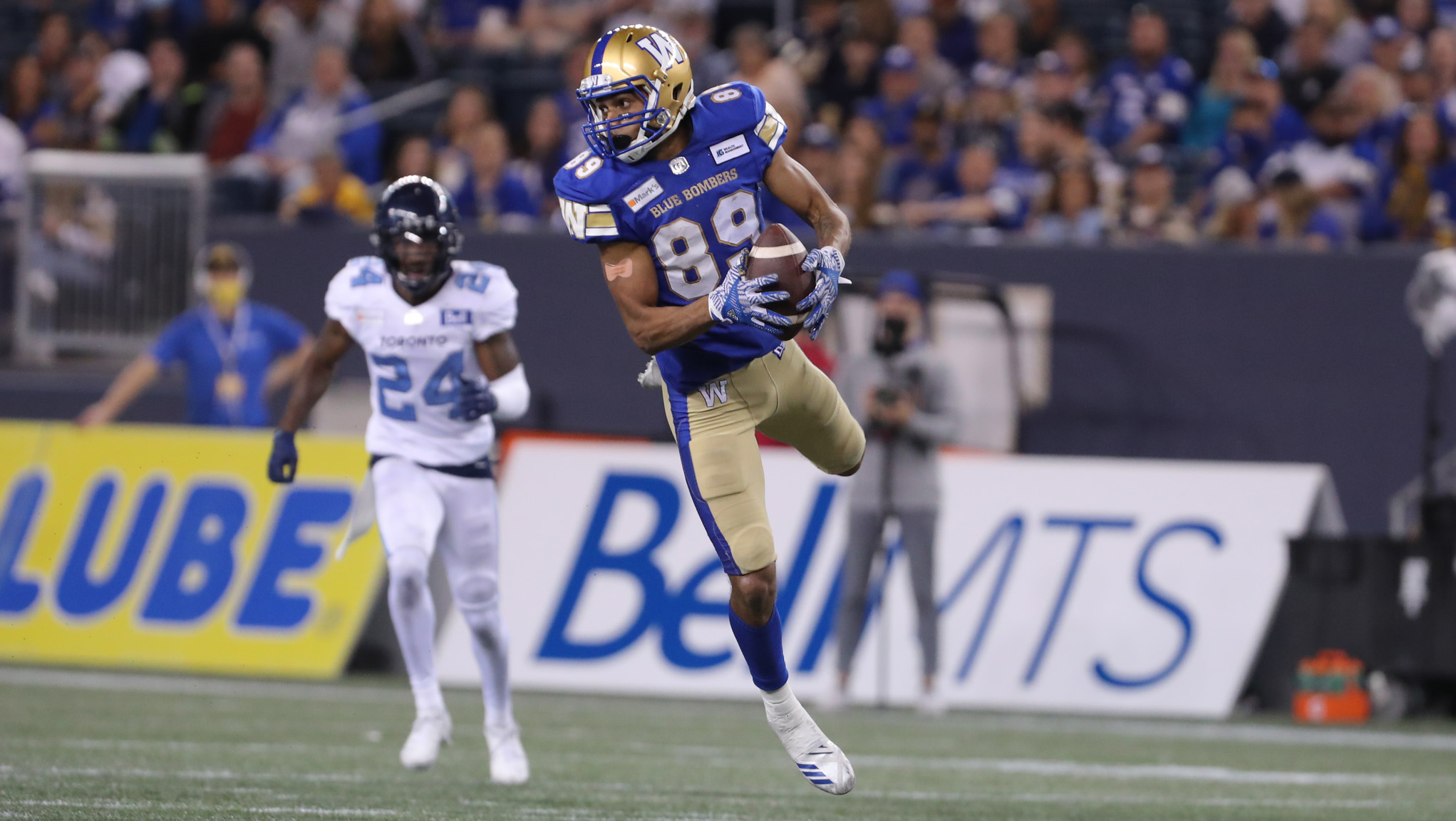 In the absence of Darvin Adams, Kenny Lawler has emerged as the Bombers’ top receiver through two games this season, with 14 catches for 168 yards and a pair of touchdowns (Jason Halstead/CFL.ca)

While it’s too early to call it, Lawler’s first two games do feel as if he will replace Darvin Adams ($6,400) as the Bombers’ featured receiver, even when Adams (shoulder) returns from the injured list.

Lawler has been targeted 20 times in the first two games and has caught 14 passes for 168 yards to go along with two majors. The rapport he and Zach Collaros ($9,519) established during the 2019 post-season has carried nicely into this year.

Their chemistry will pay off handsomely for Fantasy users when the pass-catch duo takes on an Argonauts’ defence that ranks seventh in completion percentage allowed (73.3). With Winnipeg’s ground game looking to find itself, Saturday will be a great time to watch Lawler continue his potential star turn.

Toronto’s passing game is blurry after their loss to Winnipeg when McLeod Bethel-Thompson ($8,672) was benched in favor of Nick Arbuckle ($8,193). Arbuckle had 96 yards and an interception on 10-for-20 passing. Despite the lukewarm performance, he projects to be the starter on Saturday afternoon and it won’t get easier against a stifling defence.

Arbuckle will face a D that has allowed a league-low 55 per cent completion rate and a CFL-best 5.1 yards per pass. That spells bad news for the Argos’ receiving corps, which has not produced enough big plays to merit running any of their pass-catchers this week, including Rogers. The 30-year-old receiver is a modest 10-for-16 on targets with an un-Rogers 10.4 yards per catch. In short, it’s best to stay away.

Fajardo and the Saskatchewan offence has been immune to the dearth of scoring bug that has hit most of the league, as the Riders have averaged 31.5 points in their first two games. Fajardo accounted for five majors (four passing, one rushing) in the early going and will get an opportunity to keep it going against Ottawa.

The REDBLACKS’ defence bent (443 total yards) but didn’t break (no touchdowns allowed) in a Week 1 win over Edmonton. One can’t count on Ottawa’s D dancing so close to the fire without being burned in consecutive games.

Even if he doesn’t have Shaq Evans ($7,253), count on Fajardo leading not only the Roughriders but Fantasy users to the promised land as well.

Flanders rushed for 39 yards on 11 carries in Ottawa’s Week 1 win over Edmonton. While the REDBLACKS’ offence can’t be as bad as it looked, starting Flanders isn’t a wise decision.

The Saskatchewan defence has allowed just 39 rushing yards per game. Chances are limited that Ottawa will keep the game close, so if they are indeed playing catchup that will mean fewer touches for Flanders, who was targeted just once in Week 1.