Montreal, Calgary battle under the lights on Friday night 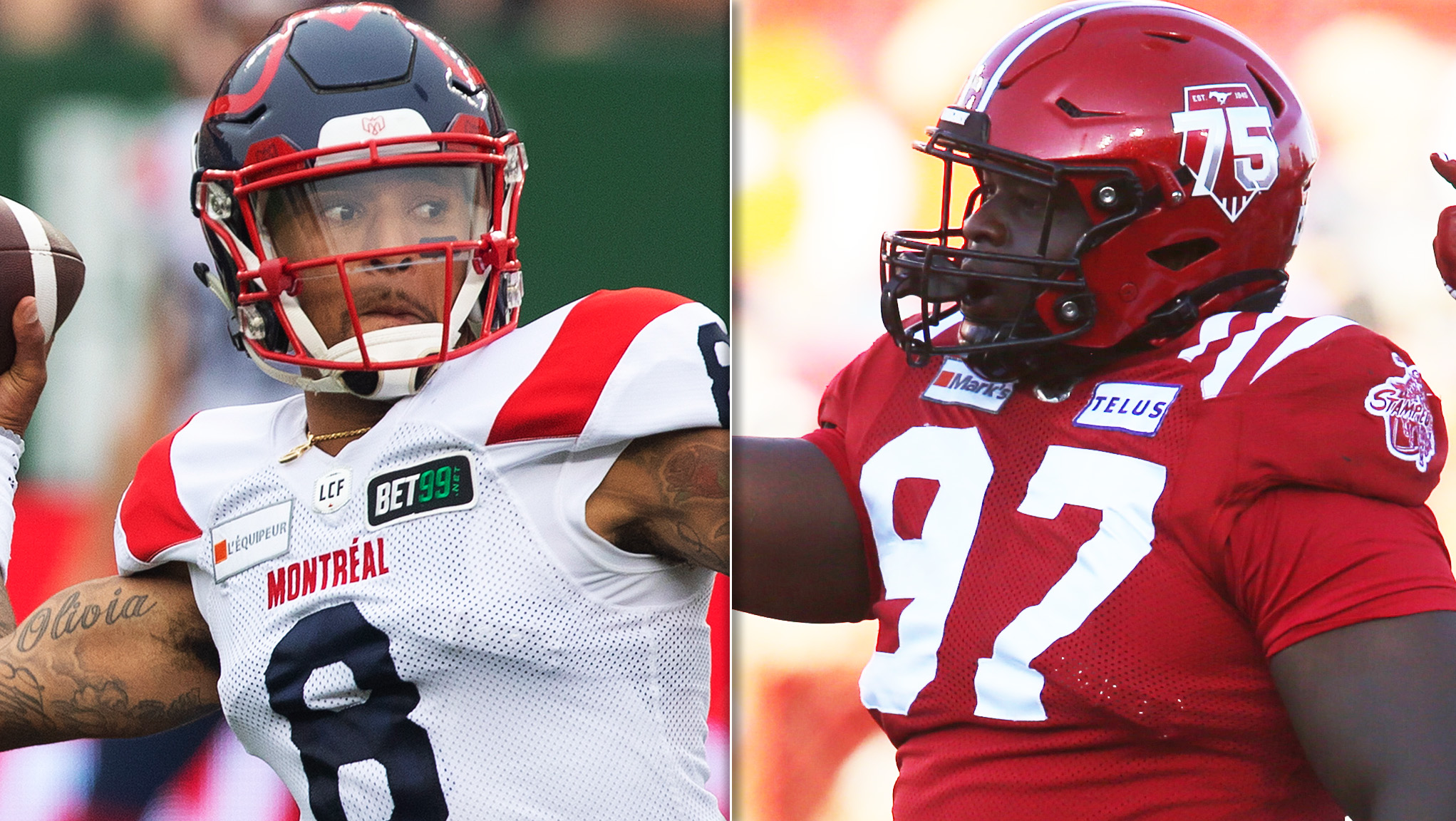 Montreal, Calgary battle under the lights on Friday night

CALGARY — Friday Night Football in the CFL kicks off with the Calgary Stampeders getting set to defend McMahon Stadium from Vernon Adams Jr. and the Montreal Alouettes.

The Stampeders enter Week 3 still in search of their first win, a rarity within the Calgary organization. To find the last season the Stamps started the first two weeks of the CFL season without a win, you have to go all the way back to 2009.

To add salt to the wound, the Red and White will be searching for their first win without the leader of their offence, Bo Levi Mitchell. The Calgary quarterback suffered a broken fibula in their Week 1 matchup against the Toronto Argonauts and was placed on the six-game injured list prior to this week’s matchup.

However, the injury has not phased the two time Most Outstanding Player.

“Just a little bit of bad luck, injuries come and go I’m glad it’s not a soft tissue kind of thing,” said Mitchell on his injury. “It’s just bad luck on where you get hit, the bone will heal up.”

With Mitchell sidelined for the foreseeable future, the Stampeders will be looking to rookie quarterback Jake Maier to take over the Calgary offence after he was named the starter on the team’s depth chart. Maier, a native of La Habra, Calif., was signed by the Stampeders in May of 2020.

Maier played college football for the University of California, Davis where he started for three seasons. In 36 games played, Maier threw for 11,162 yards and 88 touchdowns while completing 992 of his 1,495 passing attempts.

The first-year Stampeder brings an innate ability to move in the pocket and make big plays downfield with his arm strength. He’s most comfortable when throwing from the pocket but has the athletic ability to throw on the run and make plays with his legs when forced into pressure situations.

The rookie quarterback brings a sense of grit to his play and isn’t afraid to take a hit if it means making a play. The young signal caller’s play style is reminiscent of Mitchell’s, which is part of the reason the Stampeders coaching staff decided to name him as the starter for Friday.

Luckily for Maier, his supporting cast of wide receivers will only help to ease some of the nerves of his first start. The Calgary wide receivers have combined for an impressive 542 yards though the first two weeks of CFL football. Kamar Jorden leads the Stamps receiving corps with 153 yards and one touchdown.

As Maier and the Stampeders get set for Friday’s clash, they will be taking on one of the most dynamic offences in the league, the Alouettes.

Lead by Adams Jr. and running back William Stanback, the Als were able to compile 355 yards of total offence while scoring twice in their first game of the 2021 season. Adams Jr. connected with six different wide receivers for 211 yards and two touchdowns on just 13 completions, one of which was a 42-yard touchdown pass to Jake Wieneke to open the scoring for Montreal.

Calgary defensive back DaShaun Amos knows what Adams Jr. can bring to an offence and understands that his defensive unit will have to be prepared for the game breaking attributes of the Montreal pivot.

“Your eyes can get you in trouble if you’re too focused on what he’s doing in the backfield,” said Amos about Adams Jr. “As defensive backs our job is to cover first, we have to keep our eyes on our work.”

As impressive as Adams Jr. looked in his 2021 debut, Stanback looked equally as good, proving to be one of the most aggressive ball carriers in the league. Stanback ran the ball 18 times for 112 yards against a stout Edmonton Elks front seven, averaging 6.2 yards per carry while adding four carries of ten or more yards.

Stanback will be looking to build on what was a breakout year in 2019, carrying the ball 170 times for 1,048 yards and finding the end zone five times. The talent and hard-nosed running style of Stanback is something that veteran Calgary defensive linemen Derek Wiggan is well aware of.

“Stanback is going to be a great challenge for us, he’s one of the premier backs in this league,” said Wiggan. “We don’t want him to get going, we want to make sure we keep him under control, which is going to take all twelve of us on defence.”

In addition to the offensive fire power of the Als, they have an equally as disruptive defensive front seven. Their ability to pressure the quarterback and force Trevor Harris into quick decision was evident as the Montreal defensive unit combined for four sacks and two tackles for loss against Edmonton in Week 2.

The ability to create hectic situation for opposing quarterbacks is something that Calgary’s Dickenson has made a note of in the game plan moving into Week 3.

“We’re going to have to play a great game,” said coach Dickenson. “Montreal has got a front that will give everybody problems this year, so we’ll have to play well up front to win.”

As Calgary looks to capture their first win of the season at home on Friday, they will have a tough task at hand, facing one of the most exciting offences in the league in the Alouettes.

In a game that will feature a new quarterback under centre for the Stampeders, Friday night’s matchup has the right combination of storylines to become a CFL Canadian heritage moment

Kickoff is set for 9:30 p.m. ET and can be watched on TSN or ESPN+ or followed along on CFL.ca’s Game Tracker.