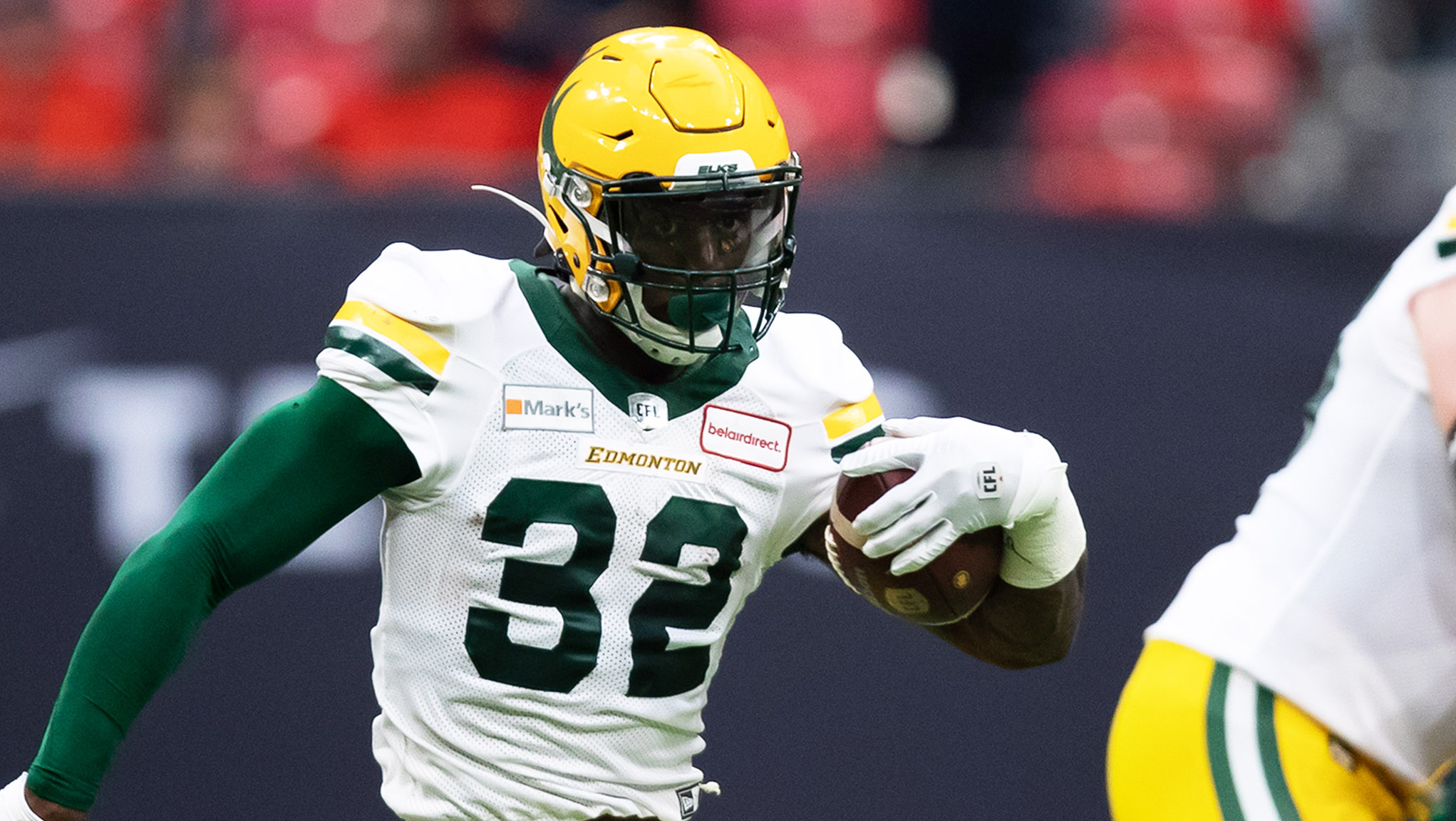 Prior to this month, the last time we saw James Wilder Jr. was during a frustrating 2019 season in Toronto. For whatever reason, the talented running back and then head coach Corey Chamblin just weren’t on the same page, which was reflected in Wilder’s usage. Wilder carried the ball just 91 times in 2019, well below how we saw him used in his first two years.

So, when Wilder and the Argos understandably opted to part ways following last season, I couldn’t help but wonder if a change of scenery would be exactly what was needed. On talent alone, Wilder is one of the league’s most gifted athletes. But for that ability to flourish, a player needs a good situation, too. Well, after signing with Montreal for the cancelled 2020 season, Wilder landed in Edmonton for 2021. So far, so good!

Wilder was a driving force Thursday night as the Elks won their first game 21-16 in BC. He finished with 22 carries, 127 rushing yards, and 33 more on four receptions. It was a game in line with what we’ve seen from Wilder so far this year, as he has been an every down factor every night. In three games, Wilder is averaging 5.8 yards per carry and has a staggering 13 runs of 20 or more yards.

There’s no question joining the Elks was a great fit for Wilder, as they needed a new starting tailback and already boasted a strong offence. On top of that, though, don’t discount the impact a chip on his shoulder is making here. Wilder knows he’s capable of being an elite force and returning to that form has been a big time motivator.

“I’m ready to get back to that, I can’t wait,” Wilder told me during Grey Cup week 2019 in Calgary. “It’s no secret, it was a little disconnect with the coaching staff and I (last season). Getting the ball, getting more in the offence, getting benched, and you know, it was just a lot of stuff going on. It was a tough year, it really was a tough year mentally.”

It’s early yet, but Wilder looks like the multi-faceted threat he was in his first two seasons with Toronto. We’re talking about an explosive and elusive runner who adds a strong receiving element to his game. Wilder can catch balls out of the backfield, but he’s also one of the most dangerous downfield threats at his position in recent memory.

It’s still early and there are bound to be ebbs and flows for Wilder this year. In saying that, everything we’ve seen through three weeks suggests Wilder remains the dynamic, dangerous, and exciting player we became accustomed to prior to last year. Add in extra motivation and a great fit with the Elks and I can’t wait to see how the rest of 2021 plays out.

Very few outside of southern Alberta gave the Stampeders much love heading into week three. For instance, Montreal was a unanimous selection amongst the CFL.ca panel, rendering us 0-6 on Friday. Yes, @calstampeders on Twitter, that very much includes me. Well…in all three phases, Calgary sure showed us, and in emphatic fashion.

Let’s be honest: the Stamps had the odds stacked against them. Quarterback Bo Levi Mitchell went on the six-game injured list, while starting left tackle Ucambre Williams hit the one-game. For a team already sitting at 0-2, those pieces of news were the last thing they needed. But Calgary rallied and might have swung their season.

Now, I stop short at hyperbolic statements like “this play/moment/decision saved or doomed Team X’s season”. But, what I will say is this: the interception thrown by Vernon Adams Jr. in the second quarter changed the entire flow of a game Calgary needed to avoid an 0-3 record and sole possession of last in the West Division.

Making his first professional start, Jake Maier struggled out of the gate. In his first three series, Maier was 2/5 passing with two interceptions as the offence sputtered and was staring at a 14-3 deficit. Then, with the Als threatening for another touchdown at the Calgary six, they turned the ball over. It was a huge break and the Stampeders seemed to realize that, because everything changed after that.

Starting at his own ten, Maier went 5/6 for 78 yards on the ensuing drive culminating in a Ka’Deem Carey touchdown run. Even with an unsuccessful two-point convert try, Calgary pounced on their opportunity and seized momentum. They didn’t relinquish their hold on it until late in the game.

A huge cap goes tip to Maier, who went 14/24 with a touchdown pass after settling into the game and earned another start for week four in Winnipeg. Carey was steady all night and was money in the red zone, while Markeith Ambles and Josh Huff turned into Maier’s favourite targets to the tune of 128 and 113 yards, respectively.

But don’t discount how important Calgary’s defensive unit was against Montreal. Royce Metchie came up with that aforementioned second quarter interception, while fellow defensive backs Branden Dozier and DaShaun Amos both had outstanding games. Derek Wiggan was an interior force and led a defensive line that got after Adams all game long, despite not recording a sack.

At 1-2 with a handful of significant injuries, the Stamps still have plenty of work to do in their remaining 11 games. That said, Friday’s win was not only crucial for their season, it was also very encouraging as they hit the road for the first time Sunday to take on the defending Grey Cup champions.

With Winnipeg’s loss to Toronto, the Riders are now the CFL’s lone 3-0 team, and they deserve to be. And, while Cody Fajardo is an early MOP candidate, it’s this Saskatchewan defensive line that has caught my eye most. Jonathan Woodard, A.C. Leonard, and Garrett Marino have combined for 11 sacks in three games, which is hard to wrap your head around. So far, no opposing quarterback is safe.

And, speaking of the Argos, I sure do like how they’re shaping up offensively. Now 2-1, we’ve seen big outings at different times from Ricky Collins, John White, D.J. Foster, and most recently DaVaris Daniels. And that’s not even mentioning Eric Rogers. We know Toronto added a lot of weapons over the last two winters, but until you see it come together, you just never know. Through three games, it sure does look like this is going to be a hard team to defend.