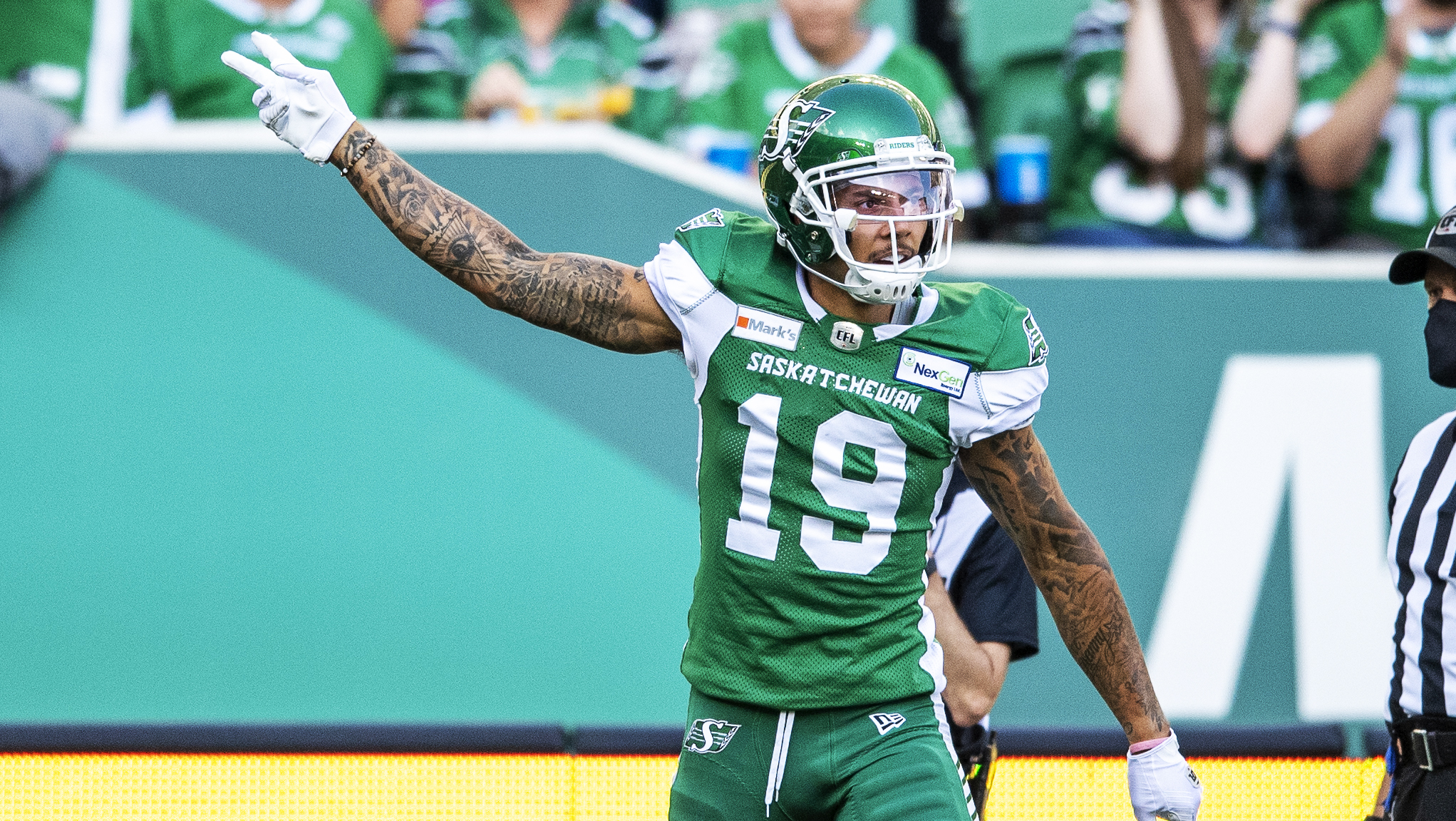 Saskatchewan has always had a great connection to the Royal Canadian Air Force.

The main reason is 15 Wing Moose Jaw. That’s the home of the famed Snowbirds, who have wowed crowds around the world for 50 years.

In 2009, it seemed fitting to dub the quartet of Canadian receivers the Riders rolled with as the ‘Canadian Air Force’ as Andy Fantuz, Chris Getzlaf, Rob Bagg and Jason Clermont helped lead the way in the receiving corps for Darian Durant.

Two of those members, Fantuz and Getzlaf, were recently announced as two of the newest inductees into the Riders’ Plaza of Honour. So it was only fitting to see the team have two Canadian receivers lead the way in receiving yards last week on their way to a 3-0 start to this young season.

The current crop of Riders receivers have plenty of fans feeling a bit nostalgic that maybe there is a 2.0 version of the ‘Canadian Air Force’ beginning to be created by general manager Jeremy O’Day.

The Riders have drafted a load of receivers over the last three drafts with Justin McInnis and Brayden Lenius in 2019, Kian Schaffer-Baker in 2020, and Terrell Jana in 2021.

Along with those four, the Riders signed free agent Jake Harty a few seasons ago to try and fill the void of the last member of the original air force, Rob Bagg.

Then you have local Regina product Mitchell Picton, who has waited a long time to contribute to his hometown team that drafted him in the fifth round of 2017’s CFL Draft. Picton finally found pay dirt two weeks ago as he’s hoping to be fifth round steal like Getzlaf, another fifth round pick in the CFL Draft.

So far, the star of the newest group of Canuck receivers is Brayden Lenius. He has caught every pass intended for him and he is just a few yards back of Kyran Moore for top spot on the roster.

The next most impressive has been Mitchell Picton. Throughout training camp, head coach Craig Dickenson praised his work ethic and ability to adapt to the new offence. Picton added his first career touchdown two weeks ago.

Rookie Kian Schaffer-Baker had a great debut with four catches and 64-yards in last week’s win. Fellow rookie, Terrell Jana already has notched his first catch of his career as well, as the Riders are showing off their blossoming talent of Canadian receivers.

Oh, and we’re awaiting to see if Justin McInnis can make his way back on the roster. After being injured in training camp, the 2019 first round pick is hoping to show the coaches the hamstring is healed up and can contribute. McInnis came into the Riders with plenty of expectations because of his first round status. He caught 10 passes for 149 yards in his rookie season, though he was used sparingly with the team only going with one Canadian starting receiver in 2019, which was the job of Cory Watson. 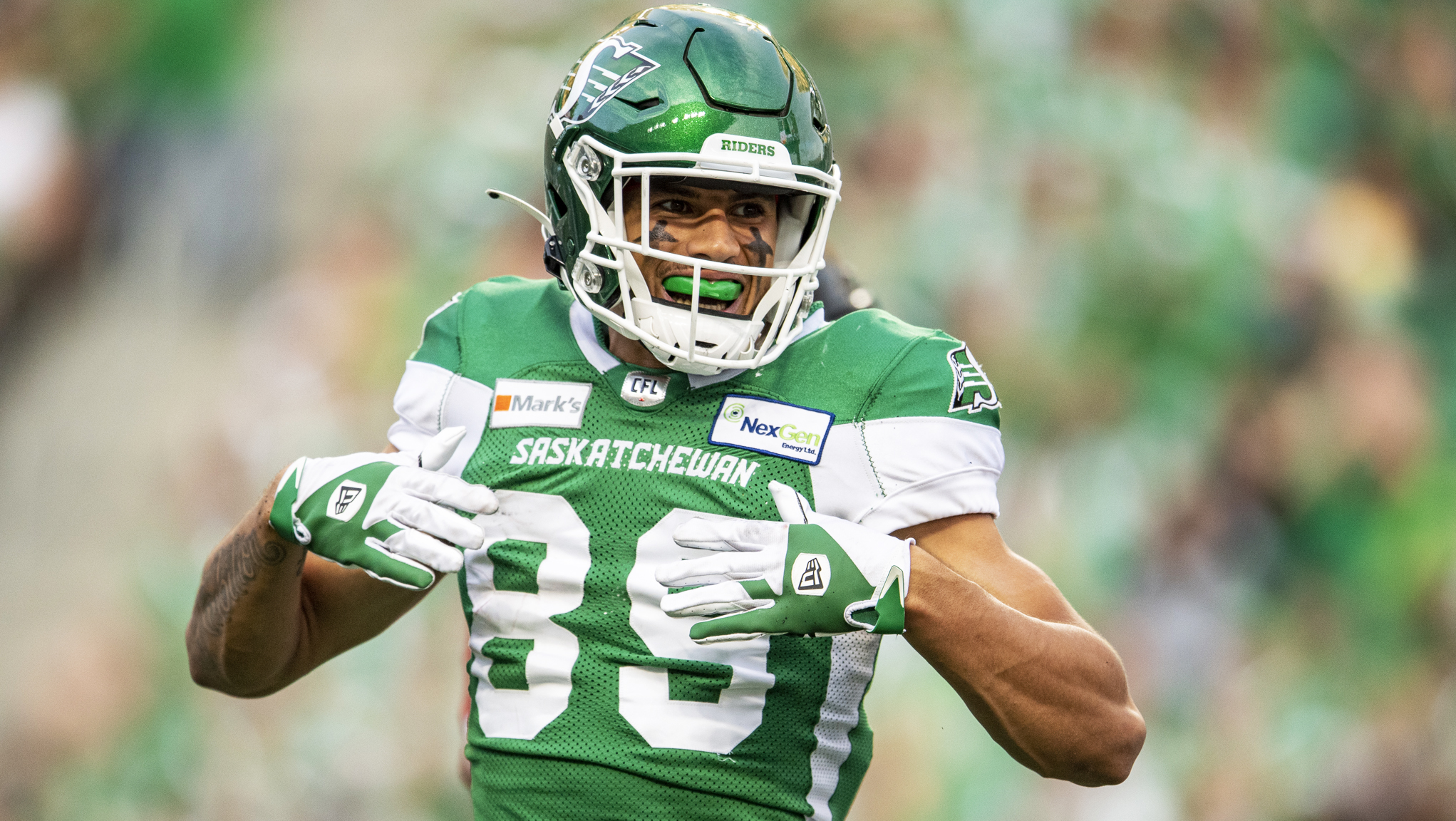 Kian Schaffer-Baker made his CFL debut in Week 3 in the Riders win over Ottawa (Riderville.com)

Now we’ll watch to see how many of these young receivers can take flight and potentially become the next great Canadian receiver, not only in Saskatchewan, but across the CFL.

The other storyline catching Saskatchewan’s attention with this 3-0 team is the large amount of local talent O’Day has gathered on the roster.

In the receiving group, Mitchell Picton and Brayden Lenius were both born in Saskatchewan.

And then you have punter Jon Ryan wowing crowds with his punts, while his long snapper and Saskatchewanian Jorgen Hus never gets enough credit for getting the ball back there quick enough for Ryan to bomb it.

The last time the Riders had this much local content was the 2013 season when LaBatte, Ben Heenan, Getzlaf, Clark, Zack Evans, Neal Hughes, Scott McHenry, Graig Newman, Paul Woldu, and Levi Steinhauer all put their names on the Grey Cup. Yes, that’s 10 Saskatchewan products who dressed in the game.

WHAT ABOUT THE DEFENCE?

With the amount of roster flexibility the Riders have created on offence with their national depth, they are almost to the point of being able to play an all American defence if they wanted to.

Increasing the team’s ratio flexibility is the fact that Micah Teitz has stepped in to replace star linebacker Cameron Judge quite effectively. Teitz leads the Riders in tackles (16) and defensive plays (22). He’s been waiting passionately for his opportunity and despite the WILL linebacker spot being considered a question mark at the start of camp because of Judge’s decision to go to the Argonauts, Teitz has answered the call.

Then you have Mike Edem, who has become an All-Star calibre safety and leader in the secondary.

Plus, Makana Henry and Charbel Dabire are capable of handling a starting role on the interior of the defensive line and do a great job in a busy defensive line rotation that coordinator Jason Shivers schemes up to keep them as fresh as possible.

If you’re a believer, as I am, the teams with the best Canadian talent and depth usually rise to the top of the standings and eventually land a Grey Cup title, then you should be a believer this Roughriders team is destined for greatness thanks to the amount of work Jeremy O’Day has done to build quite a roster of Canadian players.