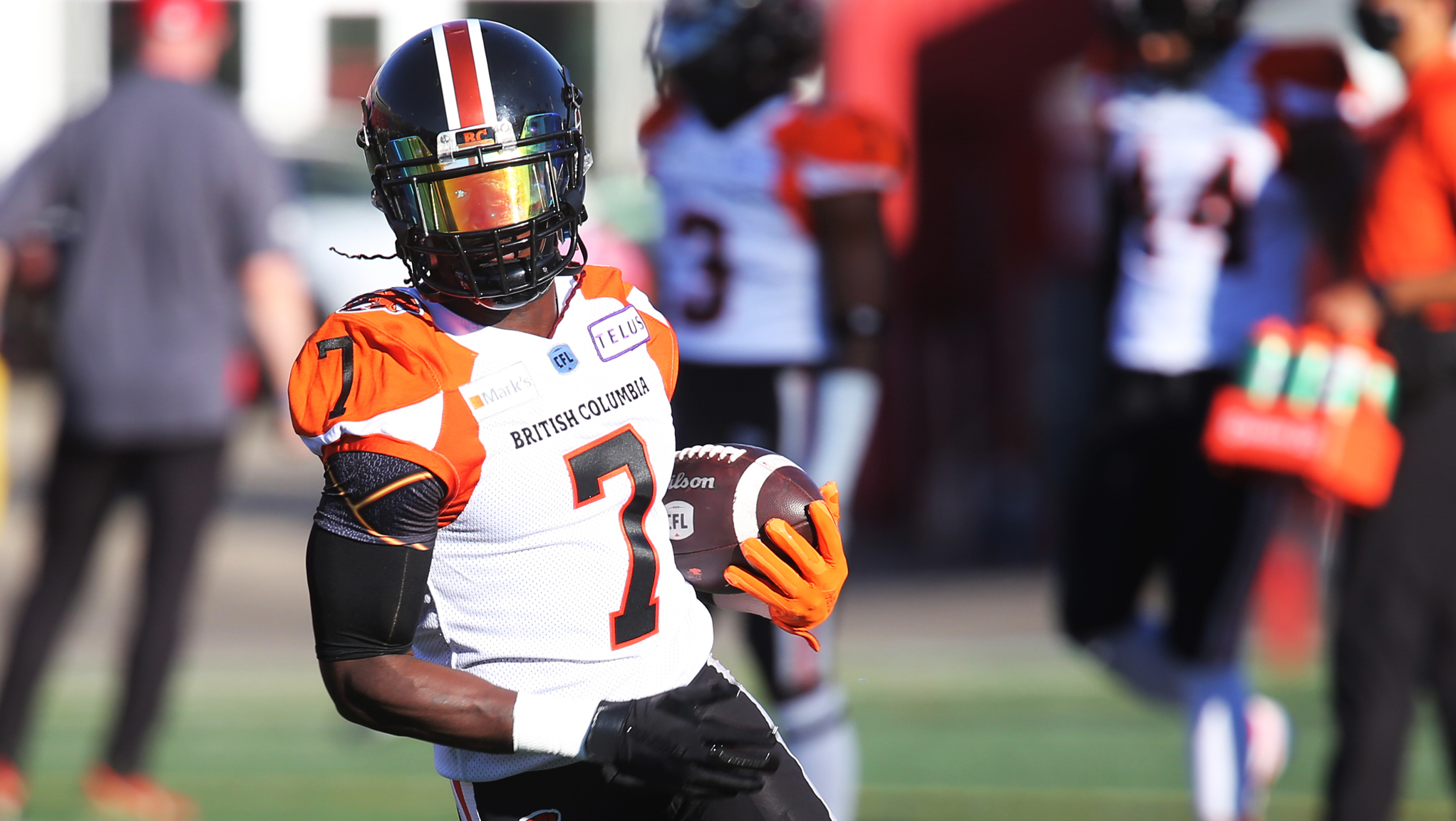 With the wraps on Week 4, we’re officially one quarter of the way through the 2021 season.

Good and bad, there has been a ton to sink your teeth into thus far. Included in that is a number of standout performances from relative CFL newcomers. I’ve got five that have caught my eye and that I’m really excited to watch as the season rolls on.

On a deep Winnipeg team in 2019, Whitehead was used in more of a gadget or novelty role, which was understandable. The Bombers used him as a kick returner and, after a busy start, sparingly at receiver as last season progressed. But what we saw from Whitehead in Winnipeg was a tantalizing sneak peak if given a little more opportunity.

That’s exactly what he’s gotten with the Lions. After nine more targets in Saturday’s win over Ottawa, Whitehead is up to a team-high 28 on the season. An accurate and prolific passer like Michael Reilly is the perfect fit for Whitehead’s skillset and we’re seeing an impressive duo forming. Four games in, Whitehead leads the Lions in targets, receptions, and yards.

Like Whitehead, we saw glimpses of what Carey was capable of prior to his season-ending injury in 2019. Entering this year, though, a lot was expected of Carey, especially with the departures of Terry Williams and Don Jackson in Calgary’s backfield. Encouragingly, Carey has jumped at the chance to be the team’s number one running back.

The Stampeders have endured their fair share of turmoil on offence early this season, but one of their lone mainstays has been Carey. With 51 carries and 15 more targets through the air, he has been the workhorse of this Calgary offence and I don’t see that changing. Carey hasn’t busted off a huge game as of yet, but he’s been effective and also leads the league with three rushing touchdowns.

So just who is this gentleman leading the league with five sacks in three games? That would be first year CFL’er Woodard, who joined the Riders in very quiet, unassuming fashion in late May. Those would not be the adjectives you’d use anymore when describing Woodard in his introduction to a new team and league.

Woodard racked up a pair of sacks in Saskatchewan’s Week 2 win over Hamilton before adding three more a week later against Ottawa. The guy has been a beast so far, but it’s not like we’re talking about a raw, inexperienced talent. Woodard was a 2016 seventh round pick of the Jacksonville Jaguars and suited up for six games with the Miami Dolphins a couple years later. After dealing with injury issues the last few years, the Riders added Woodard to an already talented defensive line. That’s worked out fairly well so far. 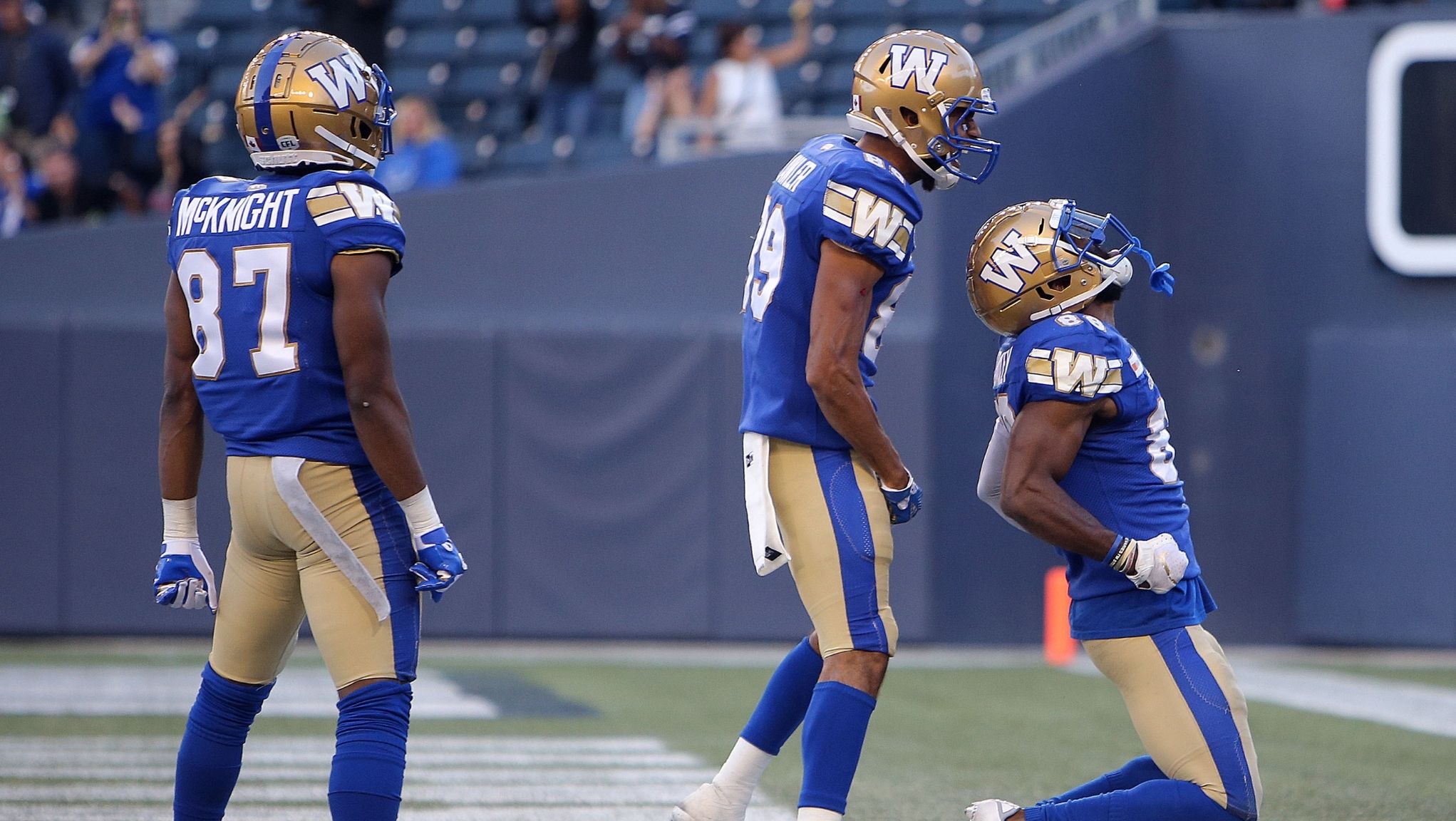 Rasheed Bailey celebrates one of his two touchdowns this season (Jason Halstead/CFL.ca)

Bailey joined the Bombers late in 2019 and got in some decent work down the stretch, including a couple of catches in the 107th Grey Cup. In five regular season games last year, Bailey made 19 receptions for 206 yards and no touchdowns. Four games into his sophomore CFL season, Bailey has already eclipsed most of those totals and is turning into a favourite target of quarterback Zach Collaros.

Bailey has seen 14 targets in Winnipeg’s last two games and is coming off his best night as a professional. In Sunday’s nail-biting win over Calgary, Bailey led the way with 108 receiving yards on six targets. And, while he didn’t record a touchdown in Week 4, Bailey had found the end zone in the prior two games. Overall, Bailey is sitting at 15 receptions for 209 yards and two touchdowns.

In terms of CFL experience on this list, Williams leads the way, now in his third season. Well, through Ottawa’s first three games of 2021, that experience is on full display. Williams leads the league with 28 defensive tackles, which means he’s averaging almost ten per game. That’s even ahead of his solid 2019 pace, which saw him finish with 69 tackles in just 11 games.

Williams had a whopping 14 tackles as the REDBLACKS took a 16-12 win in Edmonton to open the season, and he’s also been a factor at middle linebacker the last two weeks. Ottawa is finding their way on offence right now, but this defensive unit is giving them a chance to do that with how well they’re playing. Williams has been the driving force.

I quite enjoyed watching a pair of Canadian kickers go head-to-head on Sunday night in somewhat of a “generational showdown.” On one side you had Calgary’s Rene Paredes, one of the greatest to ever do the job. On the other, it was rookie Marc Liegghio in the spotlight for Winnipeg.

On this night, Liegghio got the last laugh, nailing a 45-yard field goal with 42 seconds remaining to give the Bombers an 18-16 lead. In his first night as Winnipeg’s kicker, Liegghio made all four of his field goal attempts, including from 50 and 42 yards. And, even though Paredes missed from 52 yards with time expiring, his three field goals prior helped keep the Stamps close all game long.

36-year-old Paredes has been pounding footballs in this league for a decade, so he’ll bounce back just fine from Sunday’s disappointing finish. Prior to that miss, Paredes was a perfect 12/12 on the season, proving that, once again, he’s the CFL’s gold standard. And, after doing a solid job punting to start the year, I’m excited to see where Liegghio goes from here as a kicker.