Cauz: Why Montreal and Ottawa should be rivals 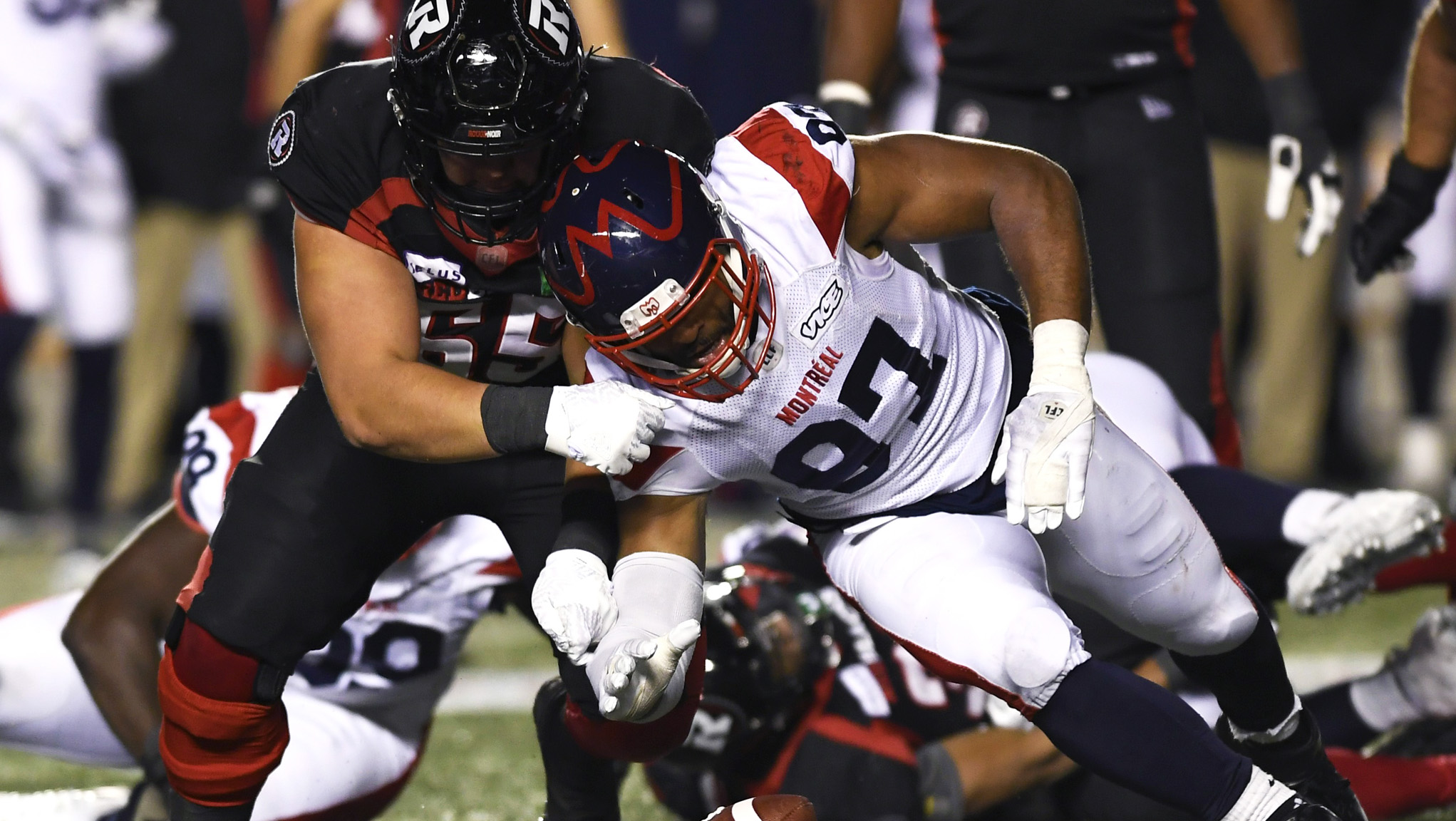 Cauz: Why Montreal and Ottawa should be rivals

Editors note: A version of this story was posted in May, 2021 but CFL.ca is revisiting Matthew Cauz’s argument that Montreal and Ottawa should be official rivals ahead of their Mark’s Labour Day Weekend matchup on Friday night.

Anyone who reads this column on an even semi-regular basis (thank you to all who do) knows how much I love “sports hate.”

Sports are one of the few avenues in life where we can be irresponsible with our emotions without real world consequences. Of course, I’m not talking about the people who spew venom via social media at the receiver who dropped a sure touchdown pass. Those individuals should have their sports fandom suspended for a period of time dependant on the content of their online attack.

I’m talking about the kind of hate that allowed me to poke fun at the city Calgary after Toronto upset them in the Grey Cup and why I get irrationally angry when I see old footage of Anthony Calvillo hooking up with Jamel Richardson. That combo terrified me so naturally, I had to harbour some ill will towards these talented and genuinely decent human beings.

This leads me to a development I would love to see in 2021: a legit Ottawa vs. Montreal rivalry.

Geographically, it only makes sense that these teams would hate each other. Next to Toronto vs. Hamilton, no two CFL teams are closer to one another than the REDBLACKS and the Alouettes.

According to the old Google Machine, the distance from Percival Molson Memorial Stadium in Montreal to TD Place in Ottawa is just 206 kilometres, that’s basically a two-hour drive if you get lucky with the lights. I’d argue it’s an easier drive than catching an Argonauts game in Hamilton where the soul crushing QEW is always packed with traffic.

I’m sure locally there is plenty of animosity between these respective fan bases but I don’t feel it the same way we do with Calgary vs. Edmonton, Saskatchewan vs. Winnipeg and, closer to home, Hamilton vs. Toronto.

Part of the problem is these franchises both have not experienced sustained success at the same time. While this has also been the case for the Tiger-Cats/Argonauts rivalry, the animosity between these fan bases also comes from a long history of distrust between cities. Toronto was the bourgeois white collar town while Hamilton was the hard-working steel town that Torontonians looked down on.

I recognize that is a massive generalization but there was some truth to these stereotypes years ago. Ironically, in 2021 so many people are looking to Hamilton for cheaper real estate and are finding it nearly as expensive as the Big Smoke.

I went back and checked and the last year where both Montreal and Ottawa had winning records in the same season was 1978. The 11-5 East Division champion Ottawa Rough Riders would go on to lose in the Eastern Final to the 8-7-1 Montreal Alouettes. Since then, there has been a whole lotta losing.

When Ottawa returned to the CFL as the Renegades, they failed to qualify for the playoffs in their brief four-year run, finishing 26 games under .500 during those forgettable seasons. If we look at more recent years, the Ottawa REDBLACKS had their renaissance from 2015 to 2018. Beyond dominating the Caps Lock button, they went to three grey Cups in that four-year span while Montreal went 21-51 and had zero trips to the playoffs during that same time as they continue to search for the next Anthony Calvillo.

On the football side of things, we have to hope Matt Nichols has been channeling his inner anger after being released by Toronto. Best case scenario is Nichols, with a Mount Everest sized chip on his shoulder, goes full John Wick on the league for not believing in him.

On the Montreal side, we just need the continued development of Vernon Adams Jr. who helped guide Montreal to their first winning season since 2012. Of course that’s the obvious football side of things that need to occur for a true rivalry to be born. Let’s face it, no one reading this or I have any control about what happens in player development or on the football field. So, what can we all do to help generate some sports hate between Canada’s second and fifth largest cities? Glad you asked.

Ottawa fans, you really need to do a better job reminding Montreal fans they once traded for Johnny Manziel. You should casually bring up he had more interceptions (4) that points generated (3) in his Alouettes debut.

Montreal, if you’re looking for quarterback slander to throw back at our nation’s capital I have two words for you: Kerry Joseph. The Renegades version of Ottawa had Joseph for three seasons and did nothing with him. Then after they folded, Kerry ended up in Saskatchewan and promptly won a Grey Cup as the team’s starting QB and the 2007 MOP Award. Maybe start with a simple, “Ottawa wasted that talent the way Edmonton is doing with Connor McDavid” line and work it out from there.

Finally on this theme, if I’m a REDBLACKS fan, I’m sending links of the October 1st, 2015 box score that saw Ottawa defeat Montreal 39-17 and in the process, Henry Burris set a CFL single-game record with 45 completions and 504 yards passing, an Ottawa record. To add insult to injury, Burris broke the record held by, wait for it, Anthony Calvillo! Okay, this tactic is a bit nerdy and I’m reaching a bit but to be fair Ottawa has had some lean years at the quarterback position between Russ Jackson and the recent Burris/Trevor Harris years.

For the older Montreal fans, let’s go on a ‘Back to the Future’ theme and bring up playoff bragging rights. The last time these teams met in the post-season was way back in 1985, the same year that Marty McFly travelled back in time to watch his parents make out for the first time. That same year saw the Montreal Concordes, behind Joe Barnes’ 344 yards passing, take out Ottawa 30-20 in the divisional Semi-Final. The shocking thing is that back in the day, a Montreal/Ottawa post-season matchup was kind of a biannual event with them meeting up 18 times from 1957 to 1985. We need to make this a regular occurrence again.

All jokes aside, the best way to grow and nurture a legitimate rivalry is through post-season experience. For the younger Ottawa fans, just drop one of those “okay, boomer” lines and point out that Montreal has only one playoff win in the past decade while the REDBLACKS have four playoff wins and a Grey Cup since their 2014 return to the CFL.

You don’t need to limit yourself to just football related burns, be creative. Ottawa can claim Alanis Morissette and Dan Aykroyd as celebrities born in their town while Arcade Fire was formed in Montreal, the same city that William Shatner was born in. You decide who wins that celebrity battle. The traffic is far worse in Montreal but the housing prices are on average around $100,000 less. Ottawa can claim the moral high ground with stories about Lewis Ward working as a COVID-19 screener at the Kingston General Hospital while on the flip side Montreal has a monopoly on the party scene as no one goes to Ottawa for a stag or stagette but we all have shady stories of that night on Crescent Street.

These are just a couple suggestions. Please, good people of Montreal or Ottawa, send me other creative ways you can make fun of one another I’m here for all of it. Because a CFL with a burgeoning and authentic rivalry between these two cities just makes for a better CFL.