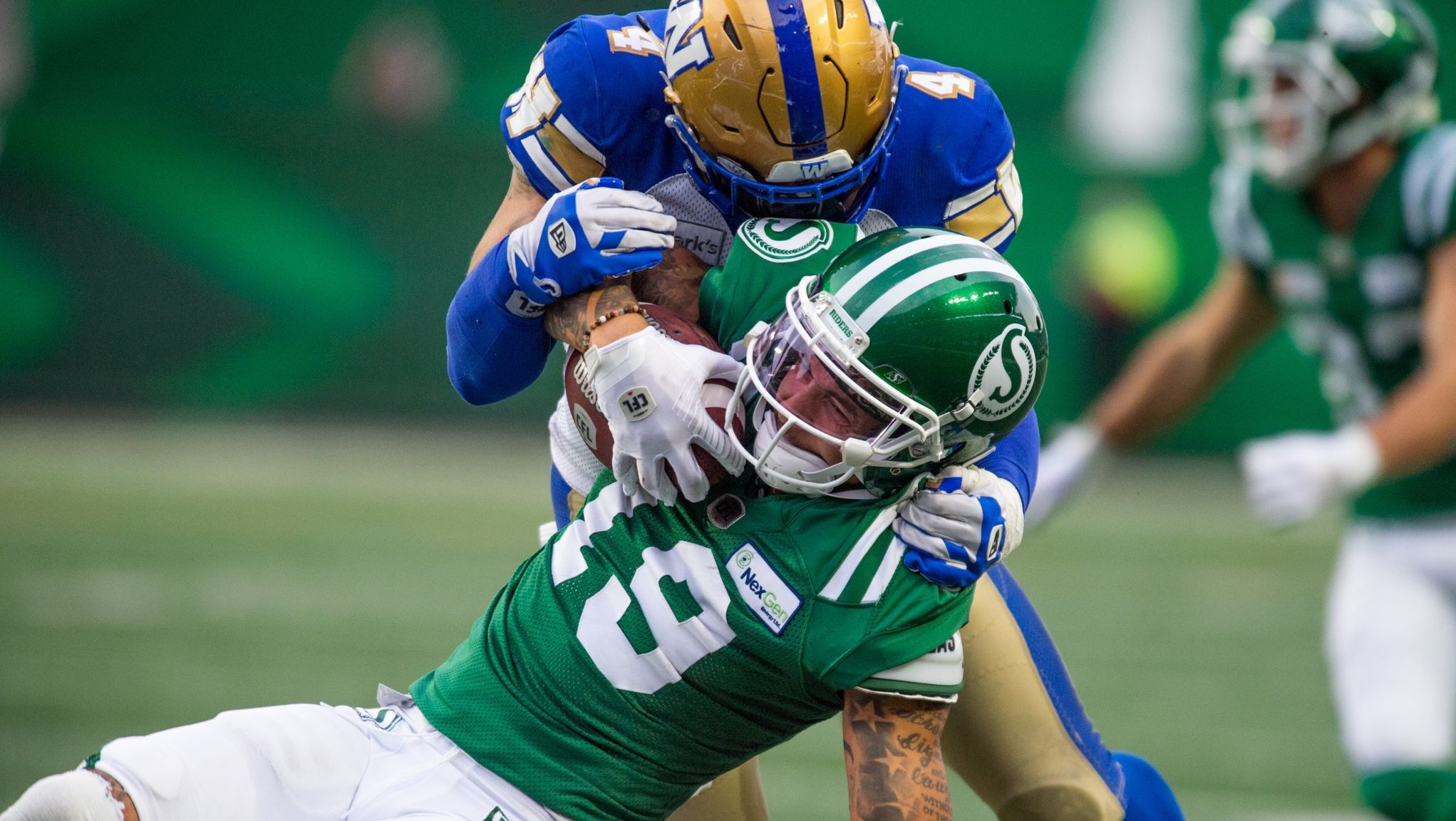 REGINA —  The Winnipeg Blue Bombers shined on the bright stage of Mark’s Labour Day Weekend at Mosaic Stadium Sunday night as they held the highest-scoring offence in the league to just eight points, winning 23-8.

Coming into the Labour Day Classic, the red-hot Riders’ offence sat atop the league undefeated with a perfect 3-0 record and a league-leading 86 points scored.

Of the many players leading the charge for the Blue Bombers defence, their defensive line made it incredibly hard for Fajardo to get any rhythm in the pocket. Being brought down three times and containing him enough to only record 21 rushing yards on the day, Willie Jefferson believes the best is yet to come.

RELATED
» Boxscore: Blue Bombers at Roughriders
» Through the lens: Winnipeg at Saskatchewan
» Bombers hand Riders their first loss of the season

“Next week will be the deciding factor,” Jefferson told members of the media. “If we can come back and do it two in a row, back-to-back, gain the lead in the West and start our run and things like that then we can say we sent the league a message.”

With the Banjo Bowl around the corner, Jefferson is looking forward to the rematch.

While Jefferson and Jackson Jeffcoat disturbed the tenches, Brandon Alexander made plays in the secondary, picking off Fajardo twice on the night. Proud of the performance himself and the defence put forth, Alexander thinks the Bombers defence can be even better.

“I just think that our defence played well together, again we got a couple of things that we got to clean up on our side, but collectively, defence, we definitely put it on,” Alexander said to the media.

Even though the Bombers’ defence certainly played at a high level, head coach Mike O’Shea does not want his players to get too ahead of themselves.

“Pride can be dangerous,” said O’Shea to the media. “The constant effort, sticking to the process, executing at a high level, tackling well, being tough on the ball, being physical may lead to more of those outcomes through that process. But, talking about holding them to a certain amount of points will never get you there. It’s about what you do in the prep week, how you take care of your body, what you bring to the field on game day, but sitting back and admiring it is dangerous.”

Winnipeg’s defence will get the chance to follow up their outstanding performance against the Riders again as they welcome them to IG Field for the 17th annual Banjo Bowl next Saturday at 4:00 p.m. ET.