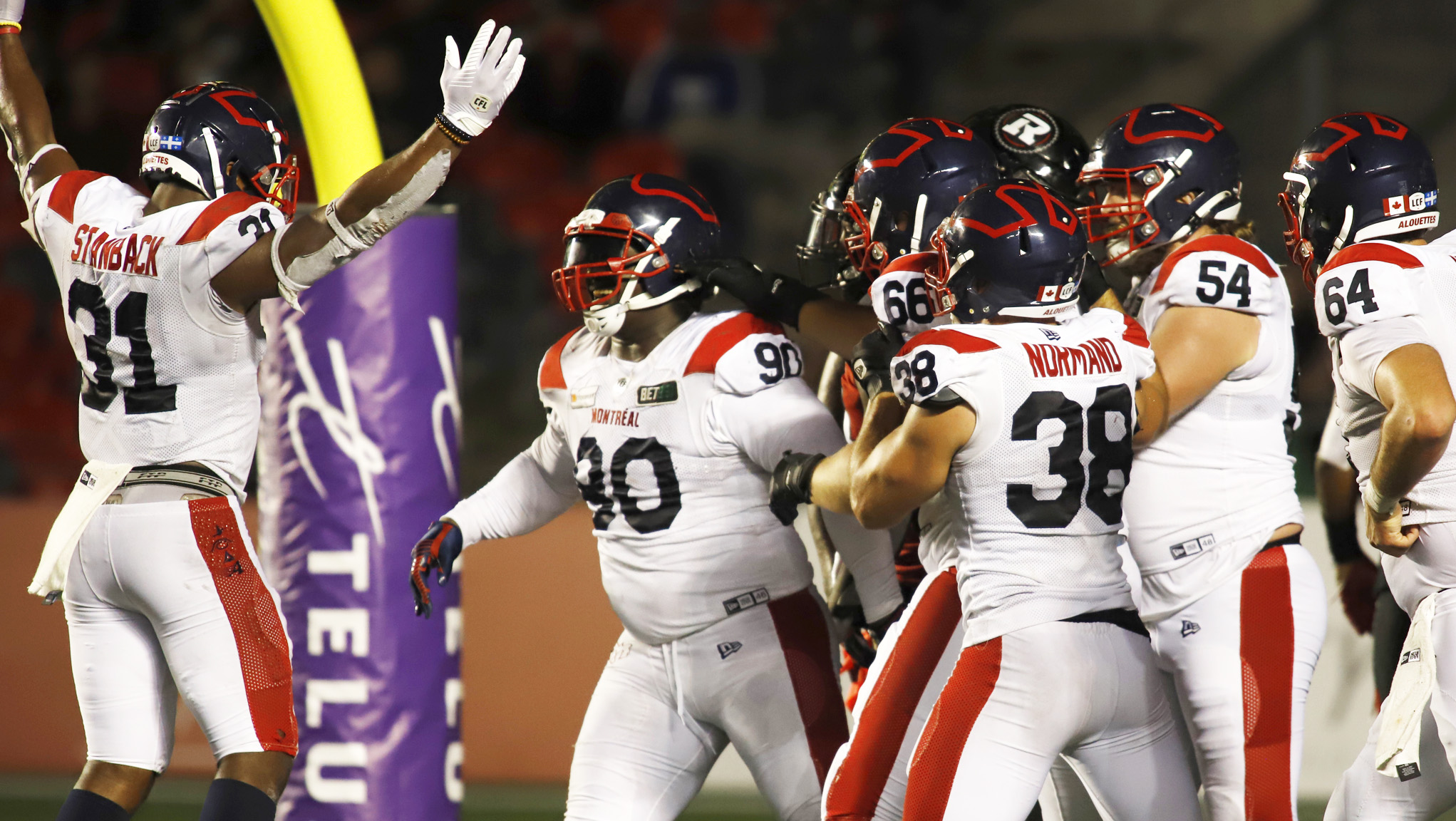 Hello, Matt Dunigan. “Slingnasty.” I like that. I’m assuming it’s one word, but you can correct me on that if I’m wrong. Now that I’ve used one of your phrases in one of my columns, the least you can do is work one of mine into one of your TV appearances. Let’s see. Gonna go with “pretzelry.”

That’s when a designed play has all kinds of twists and crosses in it. Or, when a defensive back has been turned inside out by some sweet receiver moves. Pretzelry. Let’s make it a thing, Matty.

AIN’T SEEN ANYTHING LIKE THAT SINCE THE APOLLO PROGRAM

The countdown as Apollo 11 blasted away on its historic journey to the moon? No. It’s Trevor Harris barking out signals during the first quarter of the Edmonton Elks’ win in Calgary.

Seconds later, Earnest Edwards IV was in the end zone with his first CFL touchdown, a 40-yard-long vapour trail gently rising along the sideline behind him.

One small step for a man? No. Many steps. Blurry, blurry steps.

Lessons in the fruitless chase for perfection came in a couple of different places over the weekend.

“Everybody just telling me, man, I just gotta be me, man. I don’t gotta be perfect,” said an emotional Vernon Adams Jr., following his bounce-back performance against Ottawa on Friday night.

In restoring the happy-funball version of himself, Adams once again became the leader the Alouettes want and need him to be, if they are to be successful on offence this season.

In Regina, Blue Bombers’ head coach Mike O’Shea declined to bask in the glory of Winnipeg’s victory over the Roughriders, warning that “pride can be dangerous.” So you won’t catch him in a garish display of glee over any one game as the season goes on. That’s on brand for the coach, who will only let the public celebration side of him emerge if the Blue Bombers lift the mug, again, in December.

On perfection, O’Shea was clear; He’s not after that any more than he’s after roping a cloud.

BONUS TAKEAWAY: Hey, now. This is a bit of a saucy Zach Collaros we’re seeing right now, isn’t it?

Banishing the claustrophobic pressure that had dogged Adams the last couple of weeks was not the only key to jumpstarting the Alouettes’ offence, according to head coach Khari Jones.

“You open up the playbook by tightening the playbook, sometimes,” Jones said after his team had just put up 471 yards on the way to a 51-29 win in Ottawa. “That’s pretty much what I did this week. I just concentrated on the things I felt like we were really doing well and that we could do well.”

“I threw a lot of things out,” he added.

If the Als had been trying to whip up five-course meals on offence during their struggles, Jones decided they ought to maybe get back to just making, you know, a really, really great grilled cheese sandwich. Tasted great to him, I’ll bet.

BONUS TAKEAWAY: Know what makes a good grilled cheese sandwich even better? A side of fries. In Montreal’s case, that side of fries came in the form of William Stanback rushing for 112 yards on 15 carries.

BONUS BONUS TAKEAWAY: Know what makes a great grilled cheese sandwich with fries even better? A Fantastic piece of pie for dessert. That pie came in the form of veteran defensive lineman Almondo Sewell getting his first ever offensive TD, on a one-yard plunge. He even elevated a bit on that carry, did you see that? “I’m glad Coach Khari called it,” said a beaming Sewell afterward. “I’ve told them before. I’m a playmaker. I got this.”

BONUS BONUS BONUS TAKEAWAY: Now give us this, Khari: Play action to Sewell, who then leaks into the flat for a touchdown reception. Now ya got a strong cup of coffee with that pie.

WELL, THEN. I GUESS THAT’S THAT

Saskatchewan quarterback Cody Fajardo did take a pounding during Sunday’s loss to Winnipeg and one or two of those hits really did seem to take some starch out of him, momentarily.

After the game, Roughriders’ head coach Craig Dickenson was asked the question; The one about restricting Fajardo’s movements as a running quarterback. As a scrambler.

The question came at him right away and Dickenson was obviously prepared for it, hesitating about as much as Fajardo does on a decision to tuck and run.

“No, sir,” Dickenson said when asked whether he was concerned about Fajardo’s style of play leading to extra punishment. “I think the other guy took a lot of shots too. That’s football. We don’t want Cody to get hurt but we are not going to harness him or pull him back. We’re gonna let him play the way he wants to and play the way he’s most effective.”

Asked and answered. A number of times, now. No need to venture there again.

But here’s a good question, I think, and one I’ve posed previously this season:

Would it not be a good idea to get back-up QB Isaac Harker a little quality in-game experience while Fajardo is healthy, so he can be prepared for a time when Fajardo might be sidelined for a few critical plays?

BONUS TAKEAWAY: Dickenson is only gonna take it for so long, you know. Once again, his team took a whack of avoidable penalties, leading the coach to offer a general, but not overly vague threat about that. “We’ve got some guys taking liberties. Guys that should know better. The reality is, who ya got on the field, game four, and who ya got on the field, game fourteen’s gonna be different. We’ll find the right guys and we’ll find the guys who are gonna play within the rules. And we’ll go from there.”

WOULD ALL GREY CUP CONTENDERS PLEASE TAKE ONE STEP FORWARD? NOT SO FAST, TORONTO ARGONAUTS

Snarling defence, complete with a front four that saw tackle Dylan Wynn back in action to round out the fearsome foursome that the ‘Cats have. Reunited, they were, and it felt so good.

On offence, some real fine pretzelry on running plays and downfield battles hard won by their receivers against a physical, capable Toronto secondary. Bonus takeaway, here: Quarterback Dane Evans has earned the right to lead this team for the foreseeable future. Building on a decent but not spectacular effort against Montreal, Evans emerged on Labour Day as the guy we got to know in 2019.

BONUS TAKEAWAY: If you’ve been sleeping at all on Hamilton defensive back Jumal Rolle, wakey-wakey! Has he become the guy opposing quarterbacks most want to avoid?

AND FINALLY… Hey, Mosaic Stadium crossbars. It’s one-all between you now. You sure are competitive, ain’t ya? Say, crossbars… you DO know who the home team is, don’t you?