From the Editor’s Desk: It’s time for Week 6

From the Editor’s Desk: It’s time for Week 6

What a weekend of football we were treated to!

I don’t know what I loved more – the quarterback performances (hi, Vernon Adams Jr. and Trevor Harris) or the big man TD from Almondo Sewell.

Or maybe it was the defences that I really enjoyed. I mean, Hamilton and Winnipeg’s defences showed out against Toronto and Saskatchewan. Brandon Alexander had two interceptions and rookie Deatrick Nichols had five tackles, a sack and a pick in Winnipeg’s win.

Plus, Simoni Lawrence scored a pick-six and special shoutout to Jovan Santos-Knox who I thought had a really great game for Hamilton, collecting the knockdown on Lawrence’s score and tallying a team-leading eight tackles in the Ticats victory.

But in reality, the best part of the weekend was probably the hurdles we saw from Andrew Harris and Eugene Lewis. When in doubt, hurdle it out? ..Or something like that.

Now on to something that I didn’t like as much and that was my fantasy team! Other than my two running backs, James Wilder Jr. and Ka’Deem Carey, I didn’t get as much production as I had hoped from my team. 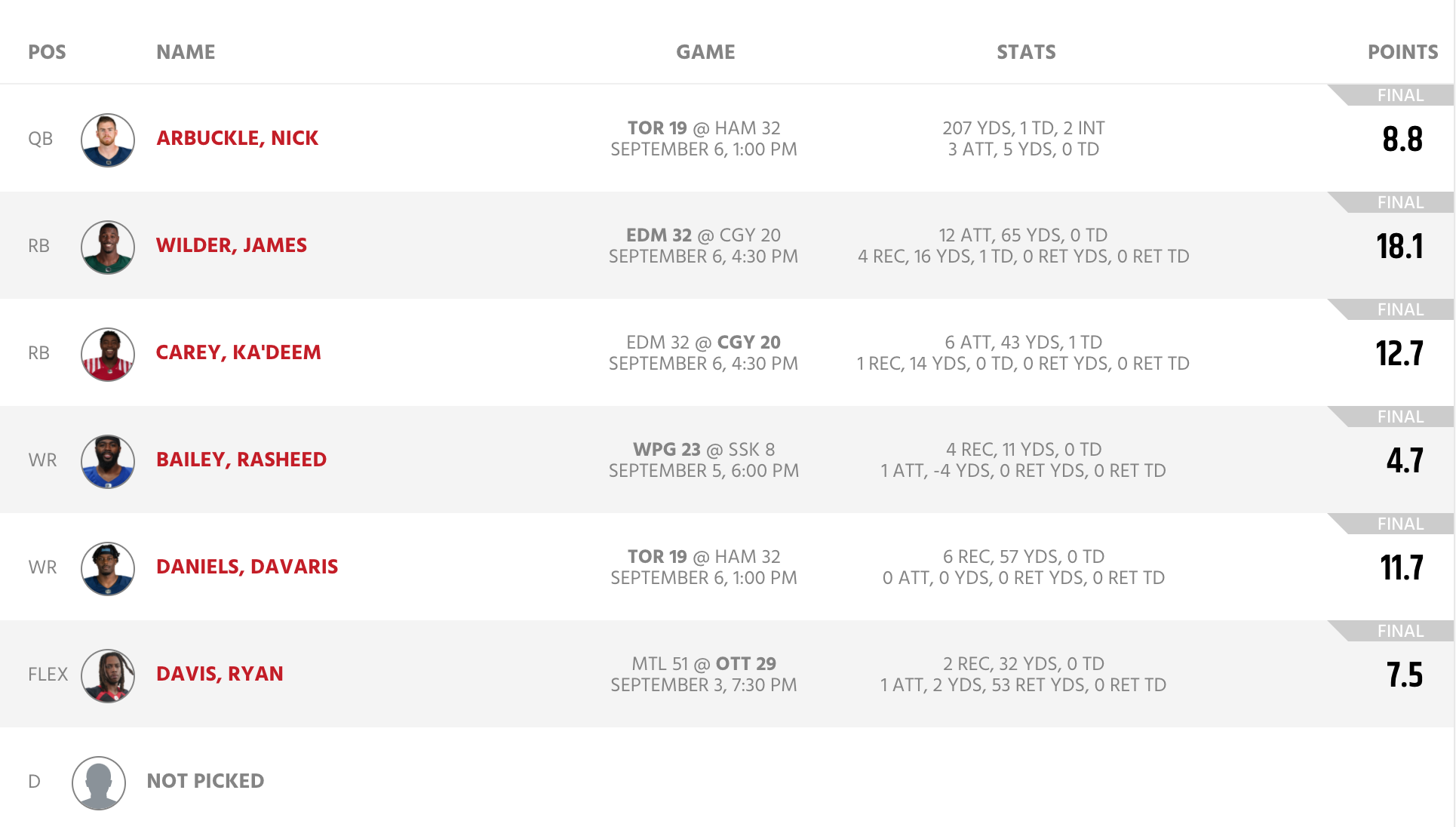 I’m rolling with Michael Reilly this week at QB – I liked what I saw against him in Ottawa a few weeks ago and as they face the same team this week, I’m hoping to see much of the same.

Ka’Deem Carey has found the end zone four times in the last three weeks so let’s hope that continues this week as he slots into one of my two running back spots. For the other, I went with Shaq Cooper against the Ottawa REDBLACKS.

At receiver, I took one of Reilly’s favourite targets in Lucky Whitehead and Mike Jones in Edmonton. My value pick this week is Tim White for the Ticats, who I’m hoping gets a few more looks with Brandon Banks out of the lineup this weekend for Hamilton.

And, as always, I’m rolling with no defence. 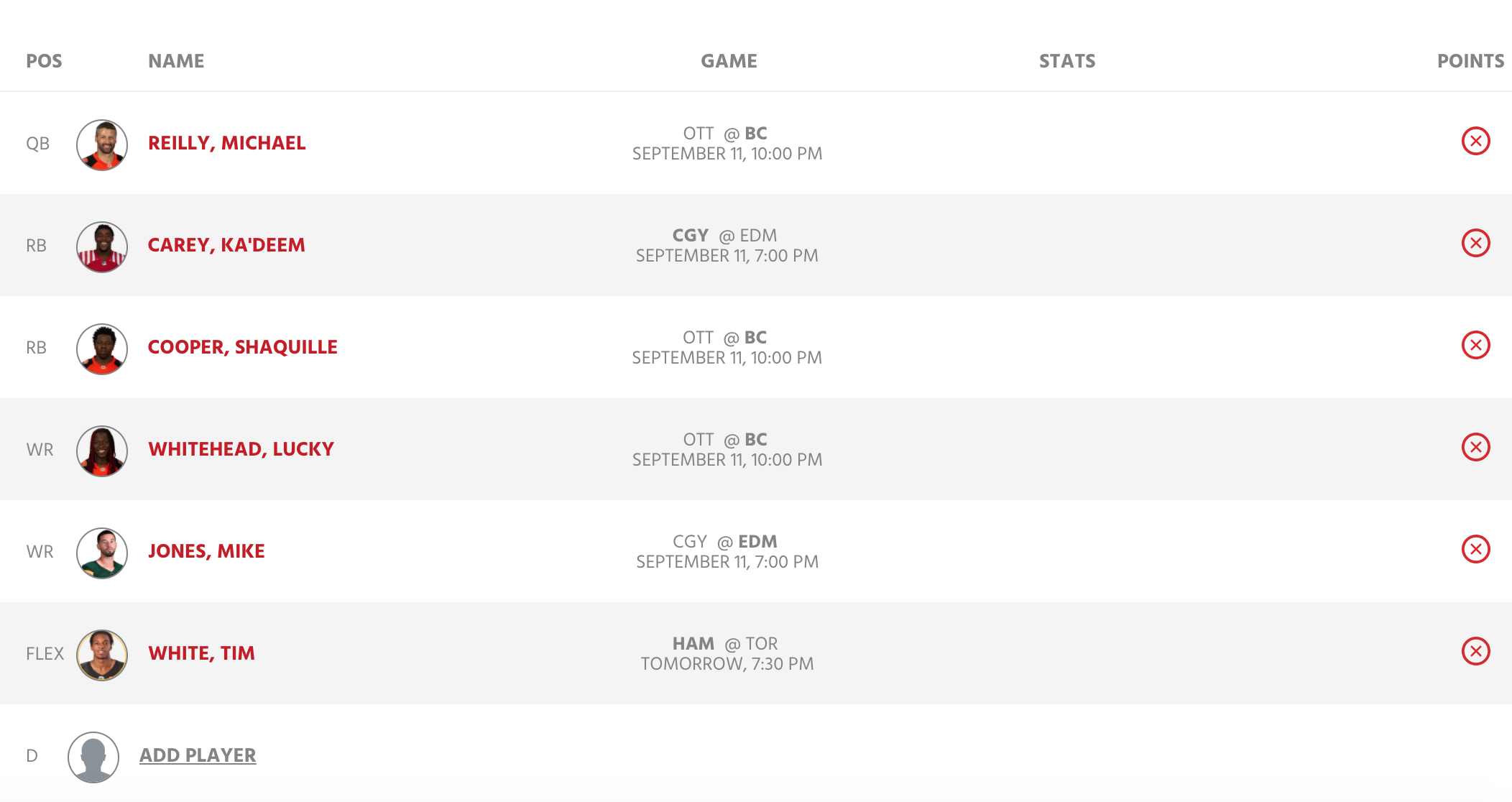 Hamilton looked really good against Toronto last week at Tim Hortons Field on all three phases. With Dane Evans under centre, a really good defensive unit and special teams production from 2019’s Most Outstanding Special Teams Player Frankie Williams, I see Hamilton taking the second half of the home-and-home.

While I don’t expect Cody Fajardo and his offence to repeat what had happened during Week 5, I still really like what I’m seeing from Winnipeg. Don’t bet against the defending champs (I’ve learned this the hard way).

Will we see Bo Levi Mitchell this week? Maybe? Even still, I think Edmonton heads home to Commonwealth and led by CFL Top Performer of the Week, Trevor Harris, takes the second of the back-to-back games in the Battle of Alberta.

Even though Dominique Davis came in for Matt Nichols and helped wake up the REDBLACKS offence, as they scored 29 points against Montreal, I think Michael Reilly and his Lions come back from the bye week hungry for a win at home and will take this one.

And finally, here’s a few gifs from Week 5 for your enjoyment.