Landry: Year of the Rocket brings us back to 1991 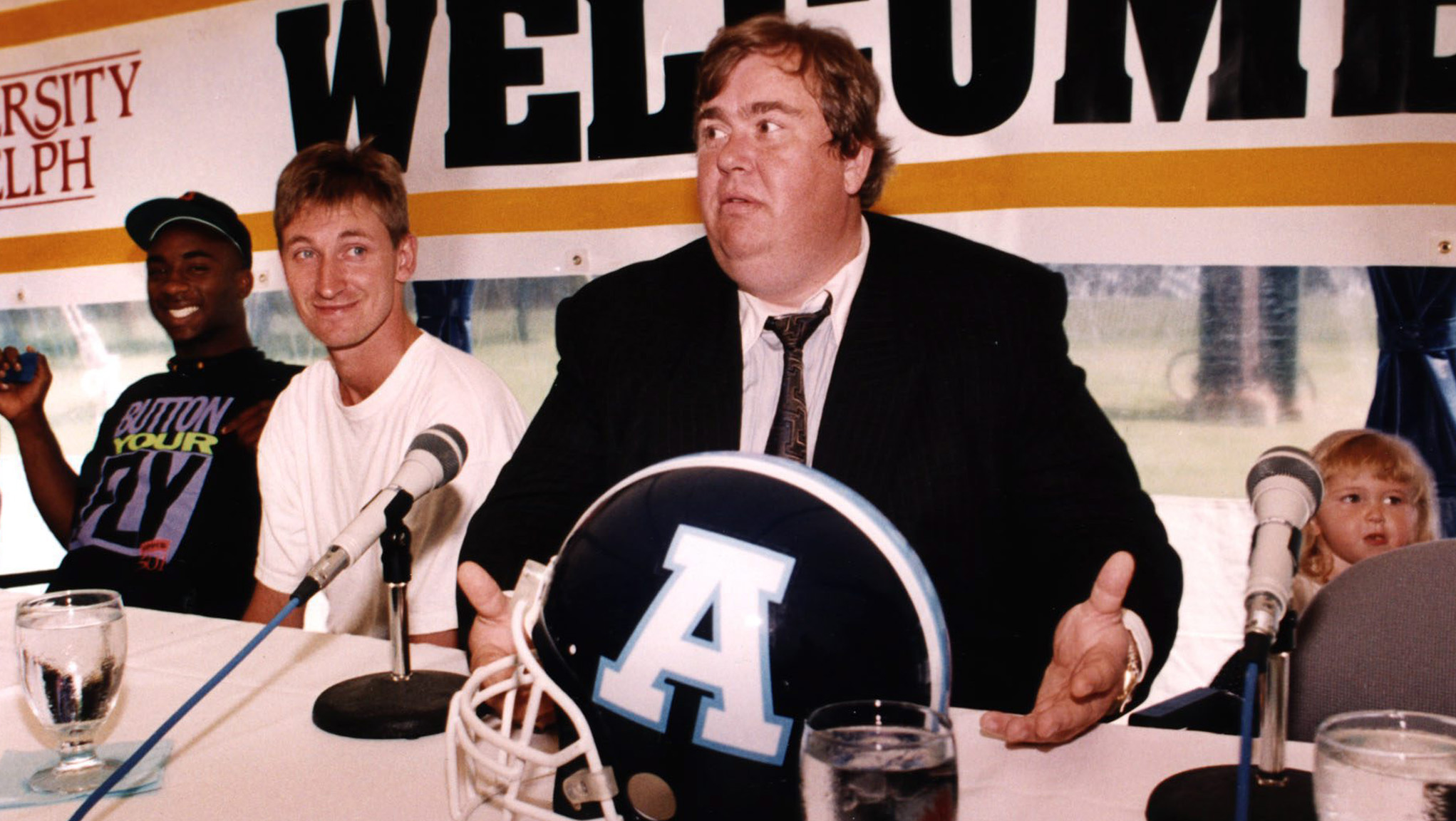 Landry: Year of the Rocket brings us back to 1991

In 1991, the Toronto Argonauts were one of the biggest sports stories of the year, not just in Toronto, not just in Canada. They made gigantic waves in the United States as well, with a trio of high-profile owners who embarked on, first, landing the biggest college football star in America and then on a dream voyage that culminated in a storybook Grey Cup championship.

It was a season draped in glitz, glamour, and celebrity. And some pretty fine football, too.

Now that season — and the two much less successful ones that followed — are the focus of a new book by author Paul Woods, who spent four-and-a-half years researching and writing the story.

In “Year Of The Rocket: John Candy, Wayne Gretzky, a Crooked Tycoon, and the Craziest Season in Football History,” Woods chronicles the ostentatious wonder of it all.

“I did this book because I believe, fervently, that 1991 was the most magical, electrifying and crazy year in a century-and-a-half of Argonauts football,” said Woods, beginning a conversation about the
project. “It’s a story that I don’t think could ever be duplicated, again.”

That story is one of a hometown boy who passionately loved his favourite football team and bought a piece of it after rising to worldwide stardom as a comedian and actor. Of a hockey legend, still in his prime, brought into the ownership group by the principal money man in the affair, himself a daring and charismatic risk-taker who would ultimately be unmasked as a fraud, while his empire collapsed around him.

And it is, of course, the story of “The Rocket,” a superstar college football talent with the fabled Notre Dame Fighting Irish, a young man gifted with blazing speed who became the centrepiece of a short but
brightly burning era in the CFL, after shocking the U.S. football establishment by bolting for the great northern league and the huge amount of money that was offered to him.

“The story arc is just amazing,” said Woods. “There’s so many elements where you go ‘What? Really?’”

RELATED
» Long Read: Chasing CFL folklore in the form of a beer can
» Landry: How the Argos acquired the Rocket
» Grey Cup On Demand: Watch the Rocket’s return TD in the ’91 Grey Cup 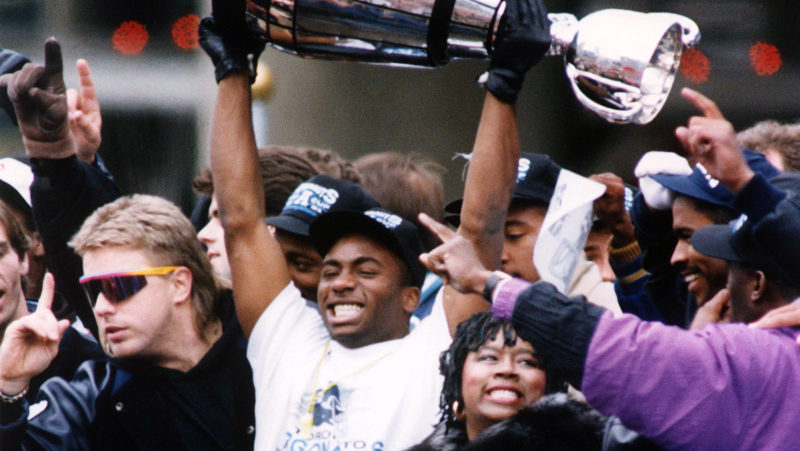 Under celebrity ownership and with a high-priced returner in Raghib ‘Rocket’ Ismail, the Toronto Argonauts raced to a Grey Cup win in 1991 (Photo: The Canadian Press)

The quick version of the story is this: Early in 1991, Bruce McNall — the owner of the NHL’s Los Angeles Kings and the man who’d engineered the biggest deal in hockey history when he landed Wayne Gretzky in a 1988 trade — teamed up with Gretzky and beloved actor John Candy in a group that bought the Argos.

“That was a shocker,” recalls Woods. That purchase, by itself, was enough to give the Argonauts a buoyant boost in the headlines department. But an even bigger jolt was yet to come, that
spring.

Soon after buying the team, the three owners made a massive splash, signing Raghib ‘Rocket’ Ismail to a four-year, $26.2 million contract — the biggest ever in pro football at the time — convincing the
21-year-old star to come to Toronto rather than be, almost certainly, the first overall pick in the NFL draft that year.

That season, the Argonauts enjoyed a presence and popularity they hadn’t seen in years — maybe ever — as their circus of hype toured the country. With stars like Pinball Clemons and quarterback Matt Dunigan already in the fold and with a defence that could match the levels of the much more publicized offence, the Argos rolled to a 13-5 regular season record, blasting the Winnipeg Blue Bombers in front of 50,000 people, at Skydome, in the Eastern Final, and then defeating the Calgary Stampeders to win the Grey Cup.

Oh, and Ismail starred in that Grey Cup game, returning a kick-off 87 yards for a fourth quarter major, re-establishing a Toronto margin that had just seconds before been thinned by a Calgary touchdown.

But so much more happened, of course, including a dramatic, high-speed descent from those fairytale heights.

In 1992 the magic disappeared, the Argos falling to a record of 6-12 and Ismail leaving at the end of the season. In 1993, Toronto dropped to a league-worst 3-15 and McNall’s financial house was falling apart. He’d built his empire, largely, on bank loans procured with the aid of falsified documents. The celebrated entrepreneur of great daring would quickly become a disgraced fraud, sentenced to 70 months in prison.

There is an awful lot to digest in this story, and Woods painstakingly and doggedly chased down detail, after detail, after detail. He conducted more than 100 interviews, including in-depth conversations with Gretzky, McNall, with Clemons and Dunigan and with dozens of others from inside and outside the organization, illustrating the dominance of the Argos on the field, the glittery cloak around them off it, and the front office drama unfolding within.

“I believe that Argo fans will love it, of course,” said Woods. “But, I actually think it’s going to appeal to people who are not necessarily even football fans. There’s so much more. There’s culture, there’s celebrity, there’s business.” 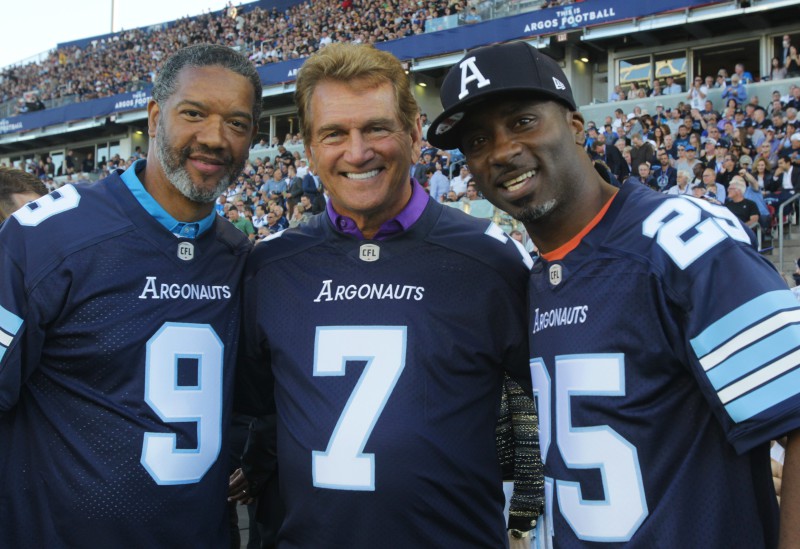 But there’s no Rocket, oddly enough. At least, no present-day Rocket.

Raghib Ismail proved to be too elusive for Woods in his attempts to interview the now 51-year-old for the book. Not that he didn’t try.

“I tried texting, phoning, email, registered letter sent to his house,” said Woods, adding that he spent more than a year in pursuit of Ismail. “I spoke to family members, I spoke to friends and colleagues, I spoke to his agent.”

The answer was firm, but polite. No thank you.

That was disappointing, but it did end up to be a bit of a blessing.

“When I finally knew he wasn’t going to be speaking to me,” said Woods, “it sort of freed me up to just let me go where the story took me.”

Ismail was always known to be a bit of a shy type, and Woods sees the Rocket in that light, and with some sympathy, noting that the demands placed on him as the face of an entire league were not really something for which the young speedster was prepared.

“It was a bit of a fish out of water experience for him, I think, off the field,” said Woods, who added that, although they could feel a bit frustrated with him at times, Rocket was generally well-liked by his
fellow Argonauts.

“Everybody I spoke to said he was a fantastic teammate. They loved the guy, for the most part.”

A lifelong Argos fan, Woods devoured hundreds of hours of game video and news reports of the day in researching this mammoth project. He’s known as a go-to source in CFL circles when it comes to archival information, particularly any involving the Argonauts.

He’s well-suited to telling this amazing story, having already written a book (Bouncing Back) about the 1983 Argonauts, a team that emerged from years of entrenched mediocrity to end a Grey Cup drought after 31 years. 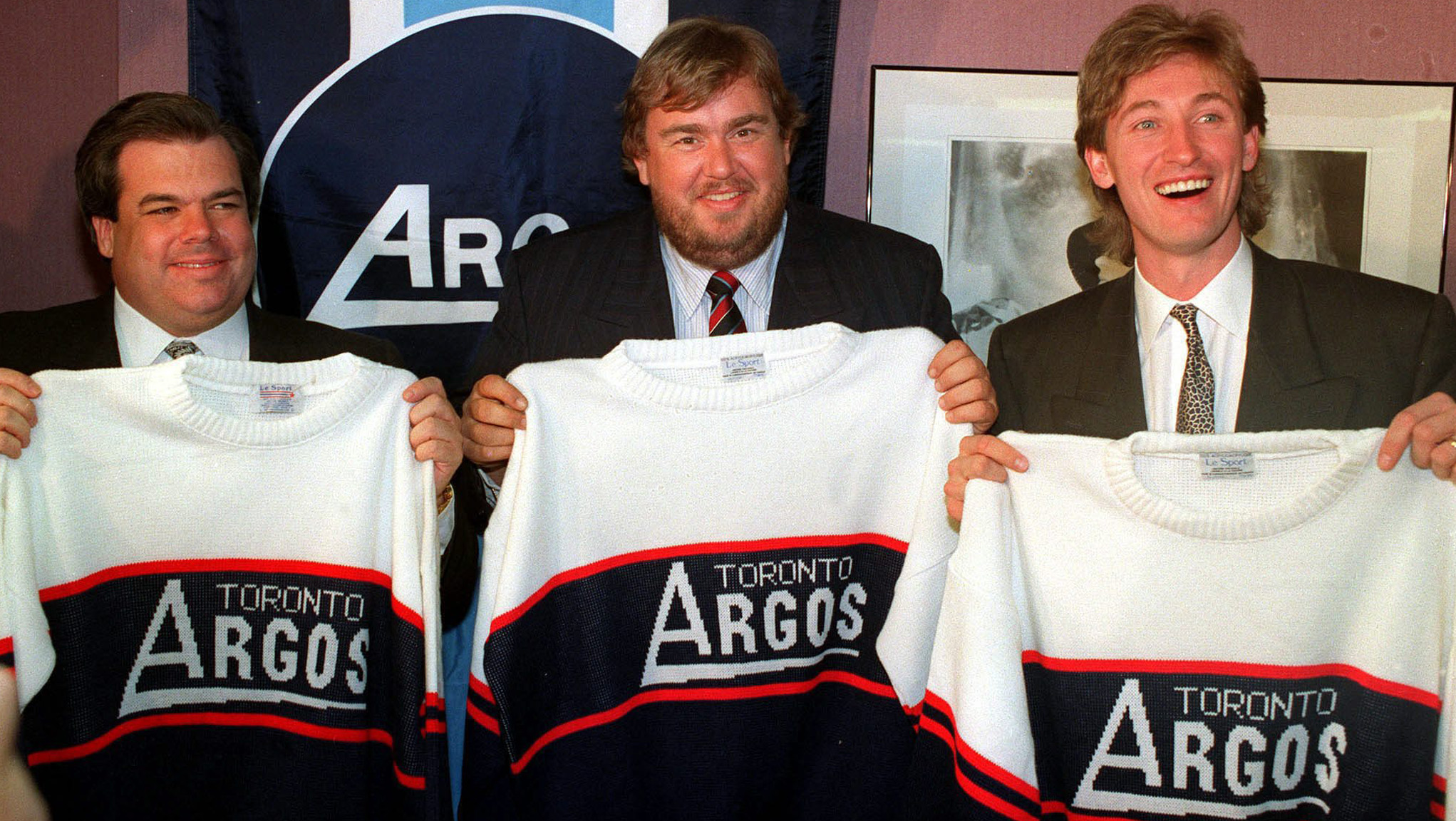 In researching for his book, Woods found Argos’ part-owner John Candy’s love for his hometown team to be pure and genuine. He made the book a testimonial to that (Photo: The Canadian Press)

While The Year of the Rocket is about myriad incredible stories, the heartbeat of it all might well be Candy, whose love for the team was both celebrity fuel and galvanizing, emotional catalyst for that magical season.

Candy had grown up in Toronto, playing high school football, himself, and when he put his money where his mouth was in buying a stake of the team, he followed up by supporting it with commercial appearances and touring with the Argonauts throughout the season. In that, he helped to drive the commotion around the organization. During the coldest Grey Cup game in history, Candy stayed on the sidelines to watch with his team, rather than find comfort in a private box.

“For him to suddenly have this dream of being at the centre of the Argonauts was so great for him,” said Woods, adding that he felt a duty to Candy, who died in 1994, in telling the story.

“I felt a really solemn obligation to paint an accurate and and full picture of John’s involvement in the Argonauts. He deserved this book to, in many ways, be a tribute to John Candy because that’s what he
earned by the way he was with that team.”

As wonderful as Candy’s experience with the Argos was in that magical year of 1991, it would come undone in a disappointing way, less than three years later.

McNall betrayed Candy’s love for the Argonauts in secretive fashion.

“He quietly asked Brian Cooper (Argos president at the time) to put the team up for sale and not to tell John,” said Woods of McNall.

The great glory, and the heartbreak that followed. That encapsulates the wild ride that was the Year of the Rocket.

It’s a spectacular and in parts unbelievable story, this particular chapter in Argo and CFL history.