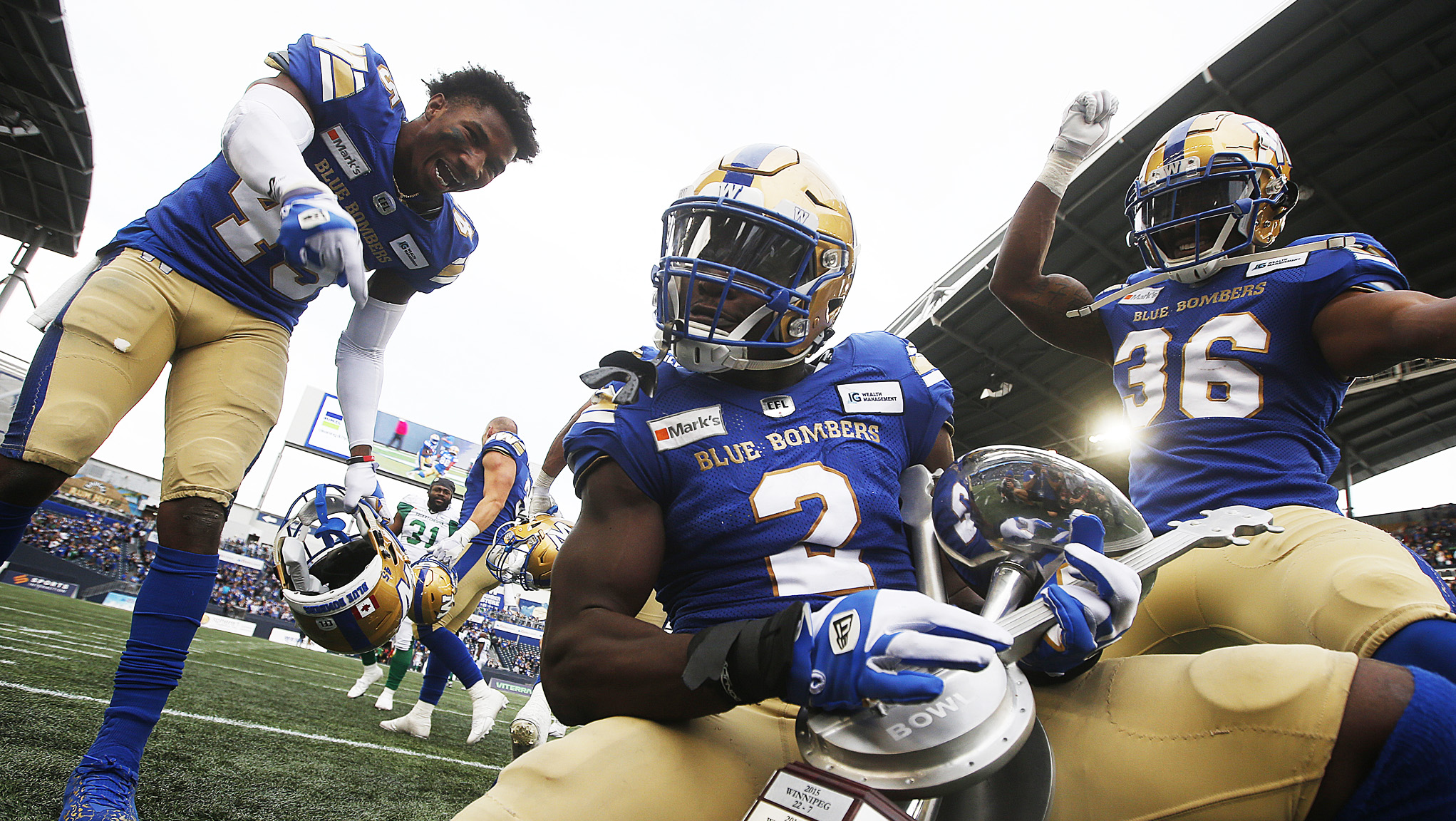 By sweeping their Labour Day series with a pair of convincing wins over Saskatchewan, the Winnipeg Blue Bombers have thrown down the gauntlet. Approaching the midway mark of the 2021 season, not only do the Bombers sit first place overall, they also look like the absolute class of the league.

Let’s start on the defensive side of the ball, where you see Winnipeg players all over the statistical leaderboards. It begins up front, where Willie Jefferson and Jackson Jeffcoat have been absolute menaces. The bookends of the Bombers’ defensive line have four sacks each and have proven to be almost impossible to contain.

Along with his four sacks, Jefferson has an interception, a pair of forced fumbles, a fumble recovery, and numerous pass knockdowns around the line of scrimmage. Jeffcoat, on the other hand, leads the league with four forced fumbles. These two look like video game players right now.

But it doesn’t end there. Linebacker Adam Bighill sits tied for second overall with 36 defensive tackles to go along with an interception and a sack. In the backfield, Deatrick Nichols and Brandon Alexander each have two picks as part of a secondary with seven interceptions total.

With all that in mind, it shouldn’t surprise anyone to know the Bombers are near the top of team defensive categories across the board. For instance, through six games, Winnipeg has allowed just six touchdowns, including a league-best two through the air. This defensive group was such a huge part of last season’s Grey Cup title and, with largely unchanged personnel, the Bombers look like they’ve picked up right where they left off.

It’s a lot of the same story on offence. Quarterback Zach Collaros has himself in the early season Most Outstanding Player conversation with 1,479 passing yards and a league-best nine passing touchdowns against just three interceptions. Collaros looks like the elite pivot we saw prior to injuries wreaked havoc on his last few seasons.

Kenny Lawler has been dangerous all season with three games of over 90 yards or more and has emerged as Collaros’ favourite target this far. Lawler’s 468 receiving yards and three touchdowns has him second overall in both categories, while Darvin Adams, Nic Demski, Rasheed Bailey, and Drew Wolitarsky have been dangerous at different times.

Finally, the reigning Grey Cup MVP is starting to round into form. After missing Winnipeg’s first three games, running back Andrew Harris has gone for 80 or more rushing yards in all three of his starts and is averaging just under 20 overall touches per game. We can probably shelve the “when will age catch up to Harris” conversation for another year.

We’re not even halfway through a 14-game season, so it’s a little early for definitive statements. That said, knowing how the Bombers ended last season and how 2021 has begun, it’s hard not to put them at the top of the mountain right now.

Much of the outside focus heading into Calgary’s Labour Day rematch with Edmonton on Saturday focused on quarterback Bo Levi Mitchell. The two-time MOP was back after missing three games and, after a shaky start, Mitchell finished the night with 276 yards and a touchdown.

But, with no disrespect to anyone on offence, it was the defensive side of the ball where the Stamps needed a massive rebound. That’s exactly what they got in a 32-16 road win over the Elks in a massive swing game. Instead of sitting 1-5 and looking way up at the rest of the West Division, Calgary moved to 2-4 while dropping their provincial rivals to 2-3.

Labour Day saw Edmonton light it up for almost 400 passing yards on an afternoon where the Stamps couldn’t get close to quarterback Trevor Harris and were burnt multiple times in the secondary. Calgary flipped the script in a massive way six days later.

Led by Stefan Banks and his four sacks, the Stampeders had Harris on the run all night long. At the final whistle, Calgary had racked up seven sacks and an interception and had limited Harris to just 221 yards and no touchdowns. Harris was frustrated throughout as the Elks struggled to post meaningful yardage on first down and were thus behind the eight ball all game long.

With seven more tackles, newcomer Darnell Sankey upped his total to 36, tied for second in the league. After rough outings the week prior, DaShaun Amos, Jonathan Moxey, and Royce Metchie all had big bounce backs. Finally, Richard Leonard had another stellar game in Calgary’s defensive backfield, hauling in his first interception. Very quietly, and unsurprisingly, Leonard has been one of the league’s best lockdown DB’s in his first five games in red and white.

The Stamps needed a win in Week 6 and got it in impressive fashion. As a result they’ve put themselves right back in the West Division mix where four teams are fighting it out behind Winnipeg.

While a Hamilton missed extra point robbed us of our first overtime of 2021, that doesn’t take away from Toronto’s 17-16 win to open the week. Nick Arbuckle is looking more and more comfortable as a full-time starter as the Argos have quietly moved into top spot in the East Division.

But it’s that Toronto defence that needs some love. The Argos are no slouch defending the pass, averaging just over 253 yards against. But through five games, you simply cannot run on this group. Toronto is allowing just 65.6 yards on the ground per game and have surrendered just one rushing touchdown.

Finally, that looked like vintage Michael Reilly to close out the week Saturday night. In a 45-13 Lions win over Ottawa, Reilly finished with 319 passing yards, just four incompletions, and four touchdowns. And, very encouragingly, Reilly and Bryan Burnham are starting to get back in a groove. Burnham has 11 catches, 13 targets, 156 yards, and two touchdowns in BC’s last two games. This should be one of the CFL’s most dangerous duos and it’s starting to look like it.