Morris: Cottoy emerging as a threat in Lions’ offence 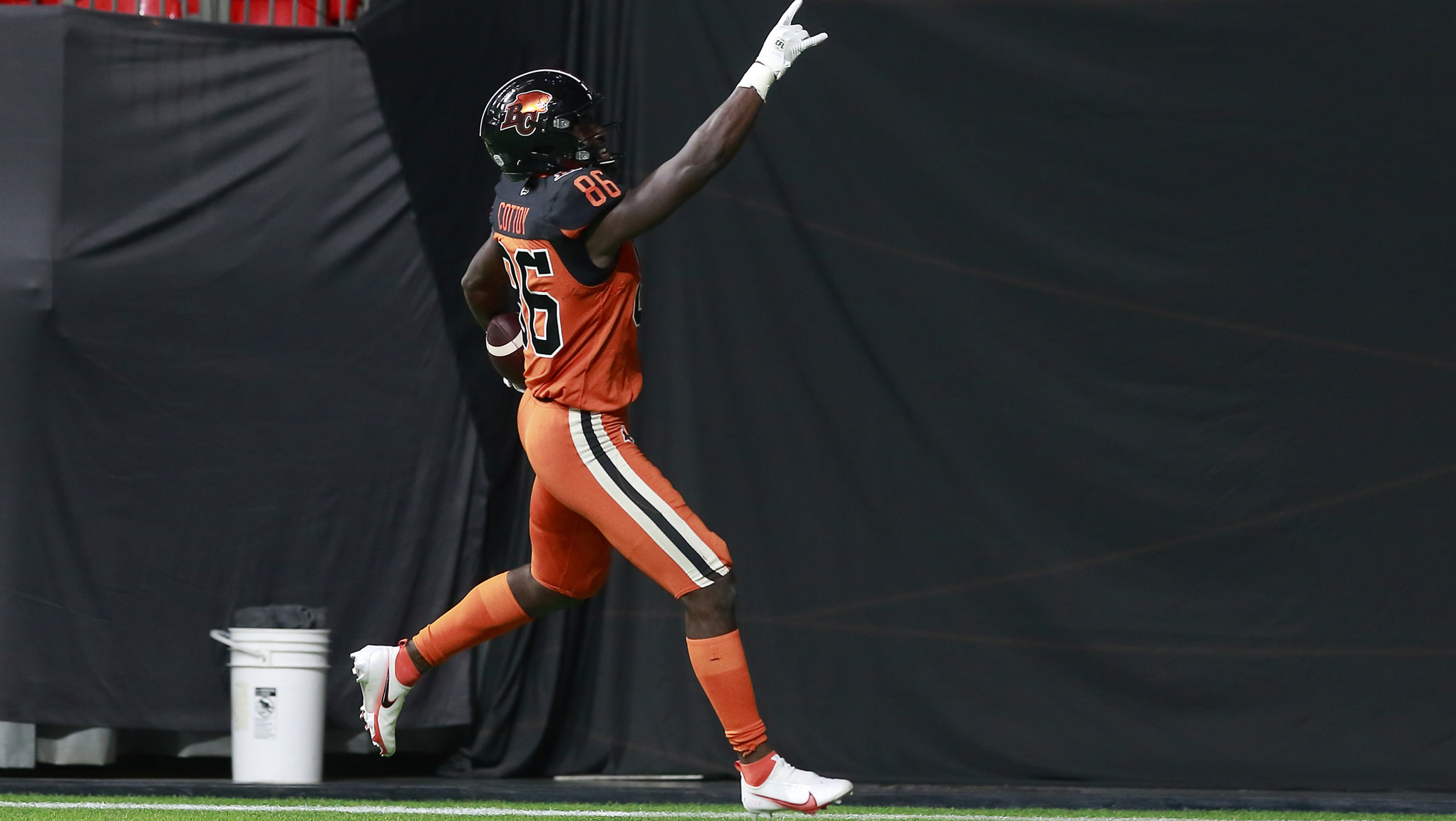 Morris: Cottoy emerging as a threat in Lions’ offence

A few of his BC Lions teammates were annoyed when it rained during practice this week, but Jevon Cottoy wasn’t the least bit fussed.

“I enjoy every second I’m out there because you never know when it’s going to be taken away from you,” said the big Lions’ receiver. “I’m just grateful for the opportunity to come play football with my teammates every day.”

After a strong rookie year in 2019, Cottoy began this CFL season as a backup to slotback Dominique Rhymes, one of the Lions prized free-agent signings. Cottoy didn’t have a catch in BC’s first three games, but in the two since Rhymes suffered an injury, he’s caught nine passes for 162 yards and a pair of touchdowns.

“I did play the same position in 2019, so it wasn’t something that was brand new to me,” said Cottoy. “When the time came, I just had to take advantage of the opportunity.

“Football is all about being a pro. I take pride in making sure I’m prepared mentally and physically. I try to stay ready so I don’t have to get ready. That was pretty much the mentality going (into) the season.”

RELATED
» Back on the plus side, Reilly looks for next steps
» Watch: Whitehead goes 119 yards after missed FG for TD
» Power Rankings: Where did the Stamps land?

At six-foot-five and 248 pounds, the 24-year-old Cottoy is a big target. He’s also hard to bring down with 64 of his yards coming after the catch.

On a BC receiving corps with shining lights like Lucky Whitehead, Bryan Burnham and Lemar Durant, Cottoy has shown some flash to quarterback Michael Reilly.

“Jevon is a guy I have a ton of confidence and a ton of faith in,” said Reilly. “He makes all the hard catches; he makes the dirty yards.

“He’s become a guy I certainly feel confident in being able to stretch the field with and go to the intermediate and deeper throws because he’s proven he’s capable of that. He’s quickly climbing up the ranks of my comfort level.”

“We’re going to continue to play him more and more,” said Campbell. “You watch him in practice and man, this guy can do some special things. He’s got a big body, he’s a big target and he also can block and do a lot of different things.

“We need to continue to use him.”

Cottoy has a better understanding than most how something you love can be quickly taken away.

Born in Saint Vincent and the Grenadines, Cottoy moved to Canada when he was nine years old to live with his father, who was working in Calgary.

“I had never seen snow,” Cottoy chuckled. “I was ecstatic to see it for the first time. That probably lasted about a year.”

Even though he’d never heard about football, he started playing the game when he was 13. In high school he bounced around from playing defensive end to quarterback and running back.

After two years of playing for the Calgary Colts of the Canadian Junior Football League — he was the Prairie Football Conference’s Rookie of the Year in 2014 — Cottoy was offered a scholarship to play for the University of Calgary Dinos for the 2016 season. But during a Colts practice he tore his ACL and MCL.

Cottoy had surgery to repair the knee, went through rehab but then needed a second surgery. He was out of football for two years and considered pursuing a career as a firefighter. 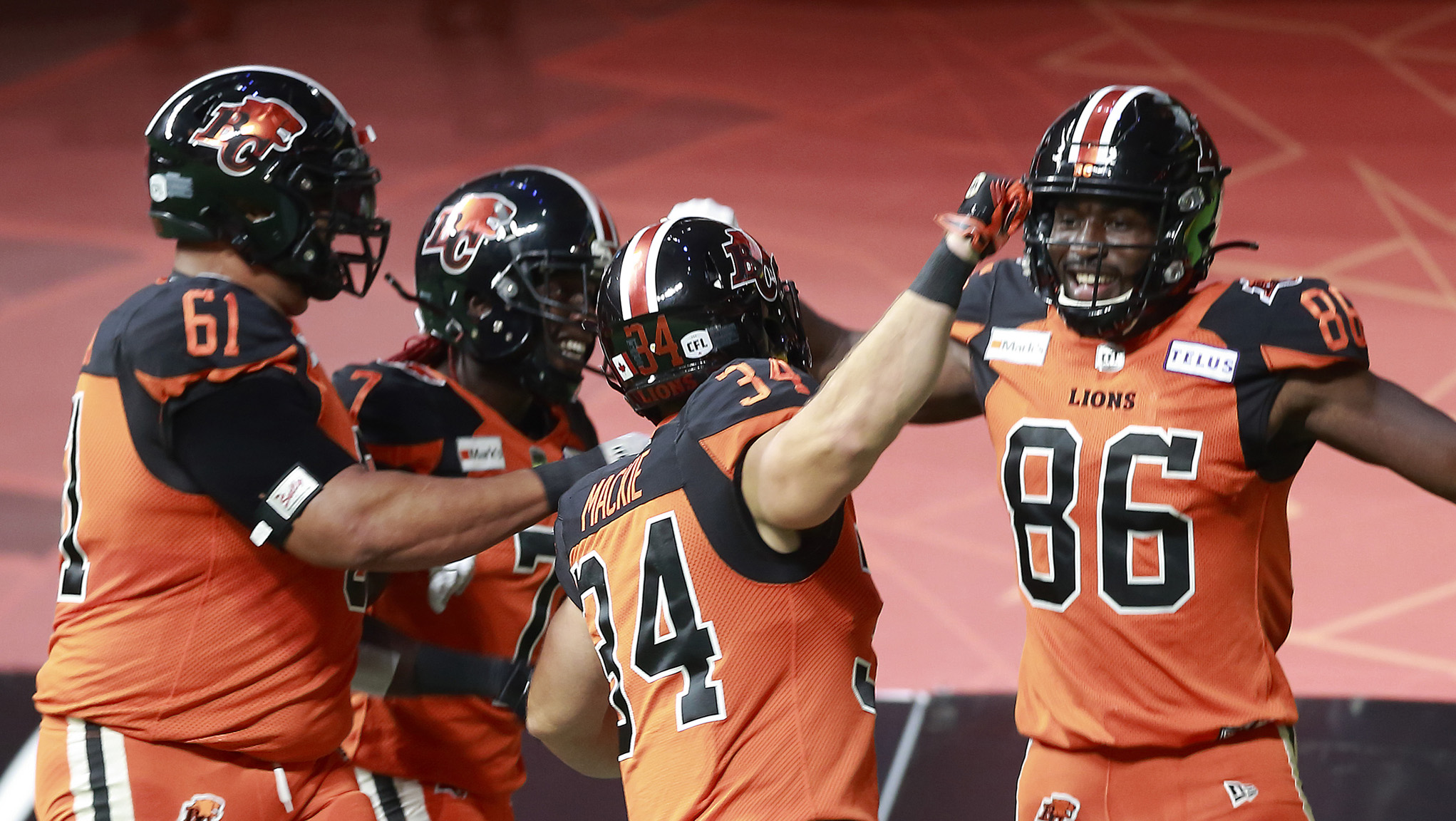 Cottoy and his teammates celebrate his second touchdown of the season this past week in the Lions’ win over the REDBLACKS (Photo: BCLions.com)

During this time Cottoy returned to the Caribbean to seek advice from his mother and other family members.

His mother Valerie never really liked Cottoy playing football because “she thinks it is so aggressive” but she realized he loved the sport.

Some of the best advice came from an aunt who played tennis when she was young.

“She told me you don’t want to  regret anything when you’re older if you don’t take the opportunity,” said Cottoy. “I remember that vividly.”

Cottoy returned to Canada and joined his former coach Matt Blokker to play for the Langley Rams of the CJFL.  Over 12 games, including the regular season and playoffs, he had 64 catches for 1,302 yards and 16 touchdowns.

Cottoy signed with the Lions in 2019 and remembers the first time he practised with the other receivers.

“I came from junior football and no one really knows about junior football, right,” he said. “The time first (Reilly) saw me he said, ‘Who is this defensive end over here trying to catch routes?’

“Every day I had to prove I could play receiver here.”

In 16 games as a rookie, Cottoy made 38 catches for 386 yards and one touchdown.

He admitted the CFL was a steep learning curve, especially the off-field preparation like watching film.

“Everything that you don’t learn in junior football, you picked up day-by-day and I’m still learning,” Cottoy said. “The biggest thing for me I had to adjust to was reading coverages on the defence.”

Reilly has seen the progression.

“I see everything I law last year but just a little more polished,” he said. “He came to us as a rookie that was very raw but had a ton of physical and mental talent. He had the ability to understand things that we were asking him to do in the game.

“He’s a very challenging matchup for defences. He’s big and strong and fast. He has great hands and he’s physical.”

One thing Cottoy hasn’t accomplished so far in his career is breaking the 100-yard receiving mark in a game. He came close on Aug. 28 against Ottawa, with five catches for 93 yards.

“I talked to my dad after and he said, ‘One more play and you could have gotten it,’” Cottoy said. “It looks better on the stats sheets but the best thing is we came out with a win and that’s pretty much all I care about.”

Cottoy can be like a Swiss army knife on the field. Besides his receiving skills he’s good at pass protection and run blocking.

“I enjoy every second on the field,” he said. “It doesn’t matter if its blocking, playing special teams…any chance that I get to put on a show I take full advantage of it.

“I do enjoy everything about football.”