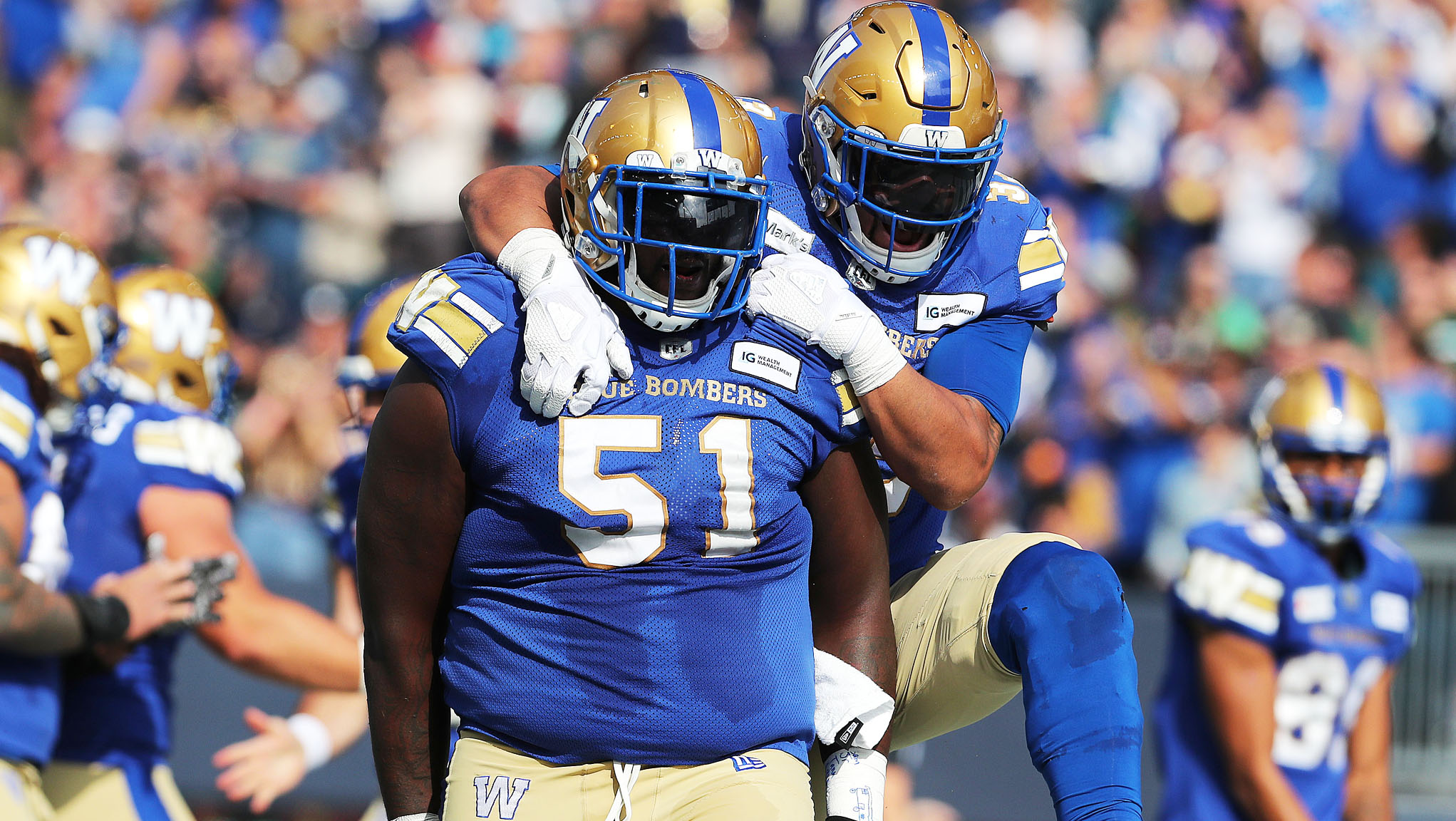 Every year we as a collective CFL following say, ‘the season doesn’t start until Labour Day.’

Well, 2021 pushed the boundaries of that and it certainly does feel like the CFL game is firing on all cylinders all of a sudden after a plethora of entertaining matchups in Weeks 5 and 6.

Back-to-back games are always difficult to judge because of the short turnaround and they often have varied results, which is why I set out this week to explore which teams ‘won’ Labour Day and the rematches. These games feature Hamilton vs Toronto, Saskatchewan vs. Winnipeg and Edmonton vs. Calgary.

Some of what I found will not surprise you if you watched the games, but some of the numbers are well deserving of a place in your virtual water cooler chatter.

We begin in Saskatchewan where the general sentiment on sports talk radio and on social media was essentially, ‘the sky is falling.’ While there is no doubt the sky of blue crashed all over the sea of green for two weeks, I’m of the belief that Saskatchewan is still a very good team who ran up against a well-oiled machine in the Winnipeg Blue Bombers.

I understand those that have a more extreme view of the Labour Day and Banjo Bowl sweep because it never really felt like the Riders were in control of either game. To understand why, I looked at the percentage of snaps taken with a lead and the results were startling.

Percentage of snaps taken with a lead

Well.. that would explain it. While the other two matchups had fairly even score lines, close scores and fewer points spreading the result, Saskatchewan held a lead on only 4.1% of their offensive snaps. That means that 95.9% of the time over two games, Cody Fajardo or Isaac Harker were chasing with a defensive line that operates best when rested – more on that in a second – and playing with a lead.

As for how the Bombers were able to control both games in a way that produced such a lopsided measurement of full-game dominance? They’re simply playing a different game than the rest of the CFL. Here is a look at the passing game efficiency measured as pass play call percentage vs. pass play call production. 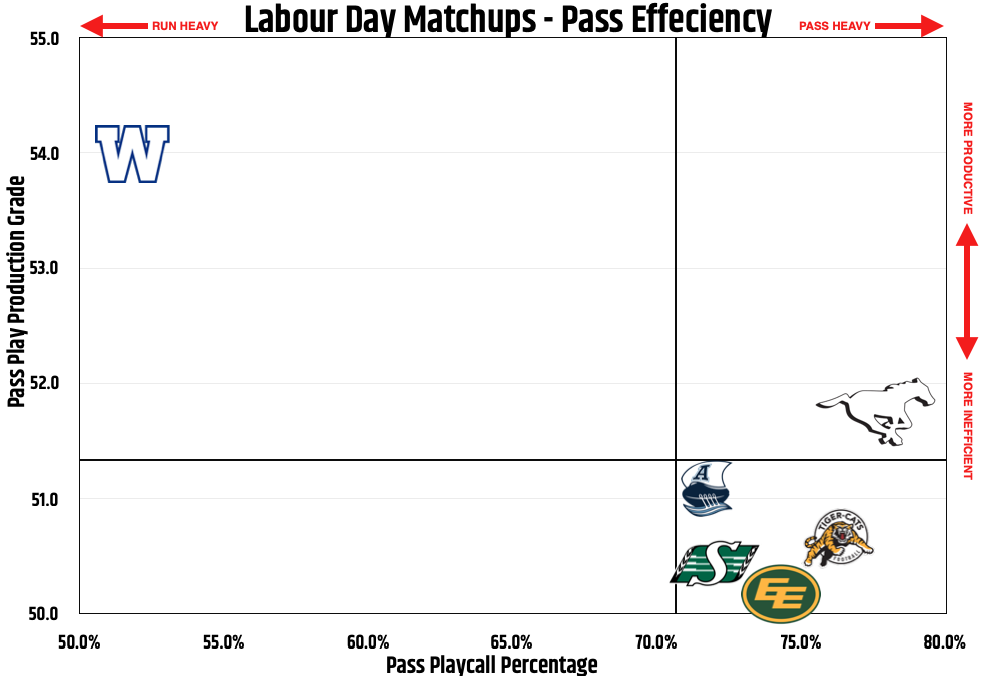 The Argonauts, Stampeders, Elks, Tiger-Cats and Roughriders are essentially all playing the same game in play call approach and the success they’re having moving the ball through the air. Winnipeg is a run-focused team with a highly effective pass attack as shown by Zach Collaros putting a bow on the Banjo Bowl with an 18/22 performance, with two of the four incompletions coming via a defensive line knockdown and throw away to save a sack.

With the knowledge that Winnipeg is running the ball much more than any other team, let’s take a look at the same metric over the Labour Day and rematch games but for rushing. 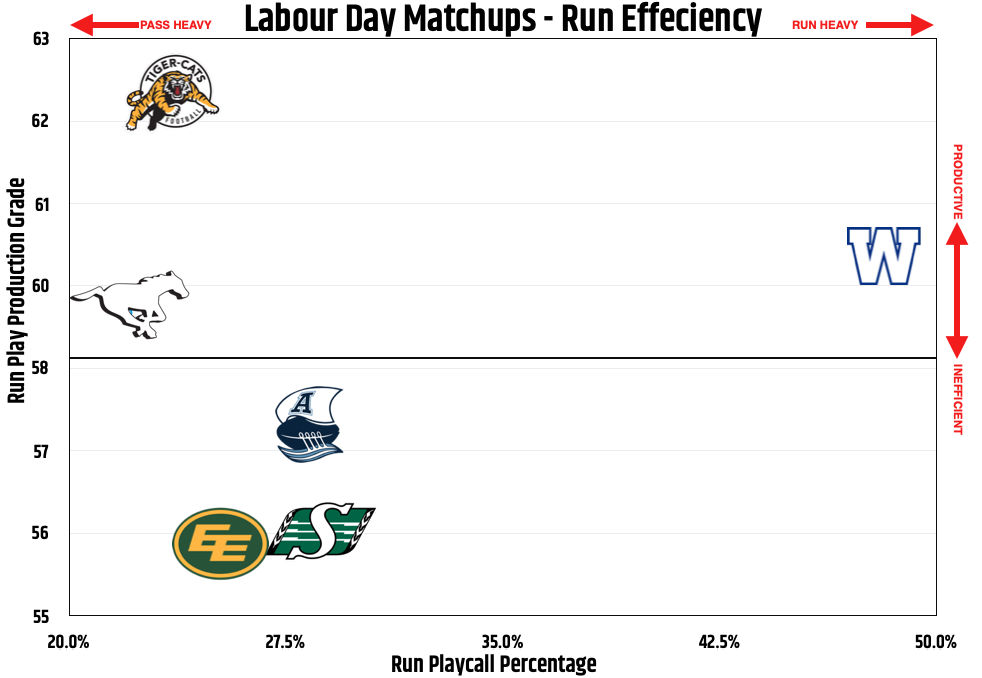 To my surprise Hamilton – who threw the ball more than anyone outside of Calgary – actually had the highest production grade when trying to run the football. Does this mean Hamilton should scrap all previous guidance and systems and install the Winnipeg playbook? Absolutely not, but it does create a conversation as to how Hamilton is accomplishing this.

Meanwhile Winnipeg isn’t running wild every play, but the Bombers consistent dedication to running the football and wearing opponents down with their physical play is clearly shown.

The last, and perhaps most important, measurement I looked at was explosive plays vs. time of possession. I think we all know how much the CFL is based on explosive gains of 20 or more yards in a single play and much of that has been lacking in the first month of the season. Balancing the ability to pickup big chunks with controlling the game through time of possession is always a worthwhile question to me in understanding the game. 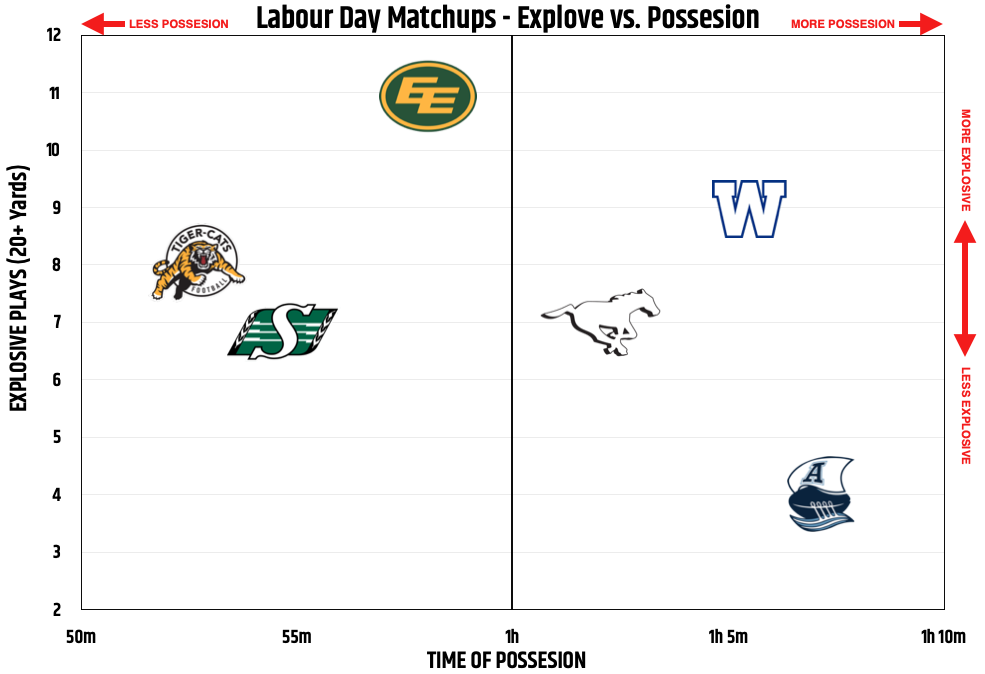 What we found here was Edmonton breaking loose from their dink and dunks perception to make big plays while Winnipeg, again, owned time of possession through their running game.

The most interesting team on this chart is Toronto, who is dangerously close to becoming one of the most explosive teams in the CFL against the tendencies of Nick Arbuckle from 2019 in Calgary.

In the Labour Day rematch victory, Arbuckle was 0/8 with an interception on passes of 20+ yards in the air, but barely missed on several home runs. He did all of this while leading the CFL in Labour Day and rematch combined time of possession.

The ability to finish those big plays, with an improved running game and ferocious pass rush, has me believing there is some serious room for growth in the land of the Double Blue. There’s nowhere better to put that on display than in front of the packed stands of Mosaic Stadium on Friday night in what could be a message sending game for Dinwiddie, Arbuckle and the rest of the blue crew.

So who won Labour Day? The Bombers. Simply put, their dominance and ability to control the game playing the style they want has the entire league on notice right now but with months to go until we hit the playoffs there is plenty of time for everyone else to attempt tracking down the big blue and gold machine before playoff time.