Canadian receivers making an impact so far in 2021 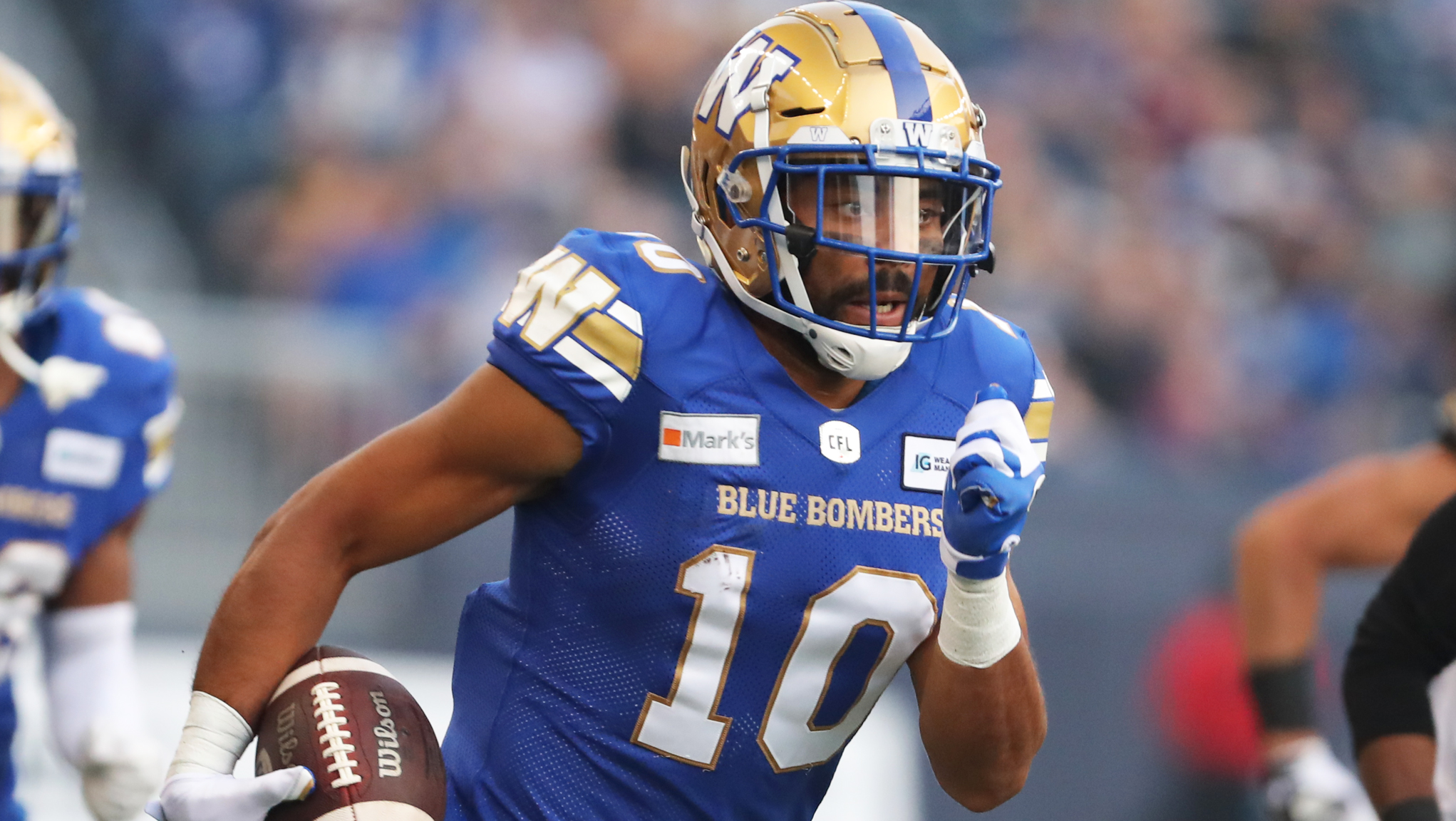 Canadian receivers making an impact so far in 2021

Do you feel it? That bite in the air as summer turns to fall, the wry smile that rolls across your face as you rediscover the CFL-watching sweater that perfectly pairs with a cold one on a Saturday night after it was tucked away to embrace the sun’s warmth back in April?

We all feel it these days, despite the CFL season kicking off later than usual, the game has quickly gotten up to speed and provided tremendous moments and spectacular plays. In the last week alone we’ve had two memorable moments in Guelph Gryphons alumni Kian Schaffer-Baker announcing his presence on the Mosaic Stadium stage, and former Carleton Ravens star Nate Behar stepping in as emergency quarterback for a beat down and beat up REDBLACKS squad.

Seeing these two steal the show has me thinking about Canadian receivers this week, especially after Behar was only forced into action after Brad Sinopoli’s ‘one year too soon’ retirement, at least if you loved watching Brad play pivot as much as I always have.

Gone are the names you knew for close to a decade atop the CFL’s Canadian receiving ranks.

Andy Fantuz, Sinopoli, Rob Bagg are all retired. Fear not though, the next generation of Canadian pass-catchers isn’t in development, on their way or hoping to crack the lineup soon.

While the likes of Lucky Whitehead, Kamar Jorden, Kenny Lawler, Bryan Burnham and more will more than likely always top the CFL’s receiving leaders board, there is no denying that every week Canadian pass-catchers are changing the game.

The sheer number of influential playmakers is eye-opening. As I reached through each of the nine CFL clubs, I found a total of 22 Canadian receivers with enough impact to use for analysis.

Here’s what I found, beginning with usage vs. production. 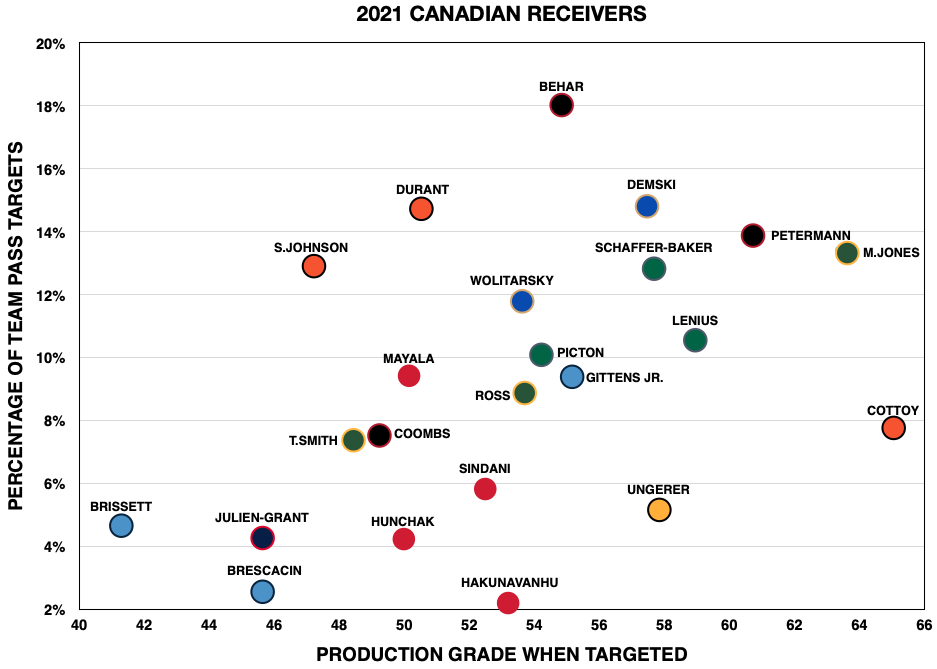 While this chart is unfair to Argos REC Juwan Brescacin and Lions REC Lemar Durant due to injuries suffered, it does raise some interested eyebrows when you realize BC’s Jevon Cottoy, Edmonton’s Mike Jones and Ottawa’s Dan Petermann are currently the most productive Canadian receivers in the CFL when targeted. 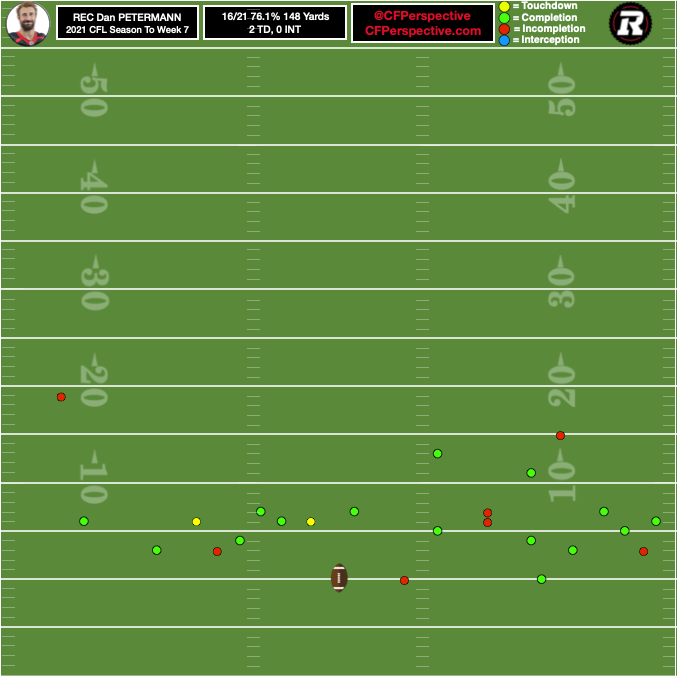 Factor in that quarterback of note Nate Behar leads the CFL in Canadian receiver targeted touch percentage and you quickly realize despite Ottawa’s struggles, that tandem of Canadian receivers has been holding up their end of the deal. 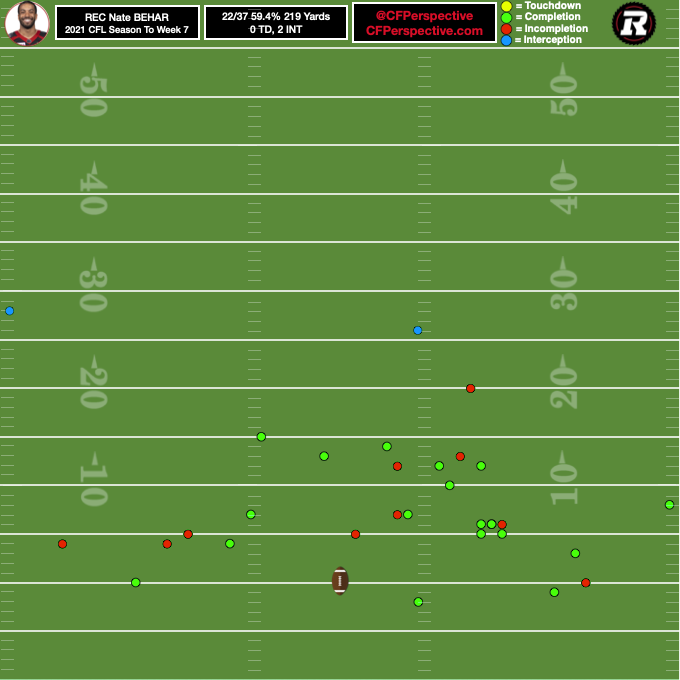 Jones has been a revelation for Edmonton in 2021. The last time we saw him in action the former 2nd round pick of the Ticats was dropping a deep shot in the 2019 Grey Cup, an issue he battled for years in Hamilton. 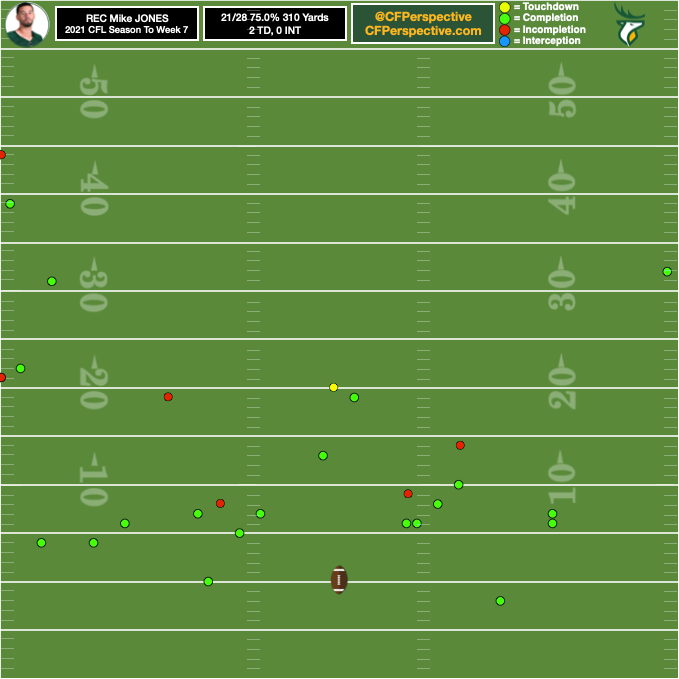 Now? In a year where Greg Ellingson has largely been a non-factor and Derel Walker has been tasked with carrying the workload, Jones has become a top three target and one of the CFL’s best deep threats regardless of ratio designation.

Cottoy splashed onto the scene in Week 4 after injuries to Dominique Rhymes and Shaq Johnson forced the Lions offence to go big in the Ottawa rain. All he did was score the Lions only passing touchdown, followed by another in Week 6 on a play that required expert level ball tracking and hands. At this rate BC is at risk of losing Cottoy to the NFL with his ability on full display to match his frame, which has previously attracted NFL evaluators. 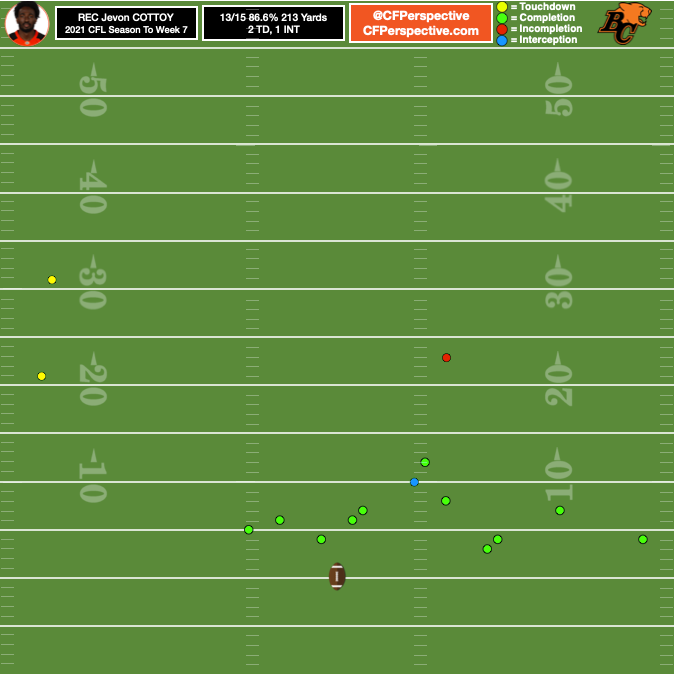 In Week 7, Kian Schaffer-Baker refused to be tackled and played a large role in the Riders home win against Toronto. What impresses me the most about Kian – aside from his stature and natural hands – is the 81.4% completion rate on targets. That’s usually a great indicator of how QB friendly a receiver is. 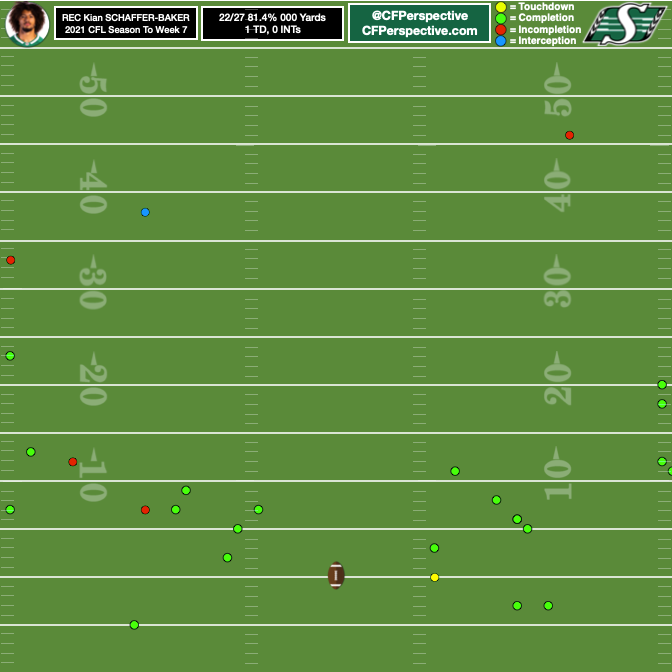 If you watched Schaffer-Baker’s Riders over the last month you know there is one man who stands alone atop the Canadian receiving big board these days, Nic Demski. 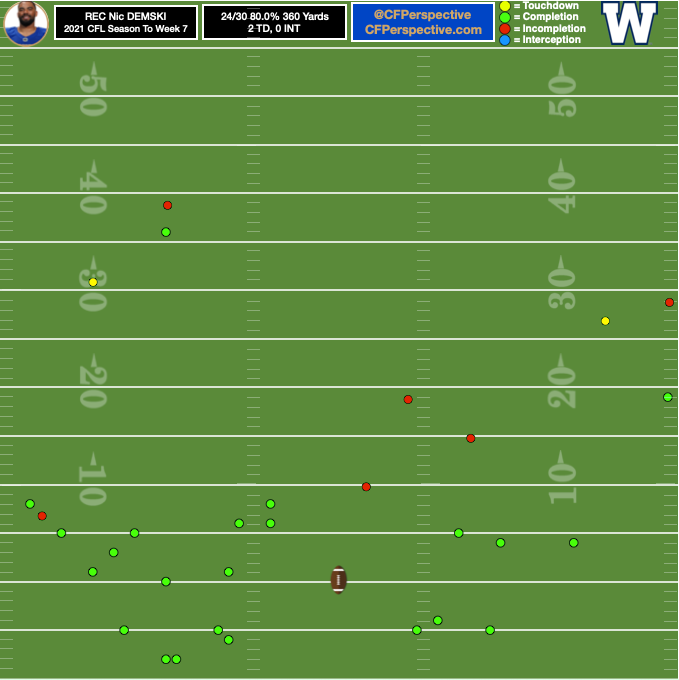 My favourite part of Demski’s game is that his leg drive and speed seem to get a 20% boost every time the football touches his hands. He runs smart routes, isn’t afraid to do the dirty work – see Week 7’s rushing touchdown – and would likely have at least two more touchdowns if he could’ve made one more man miss in the open field.

Demski is the new Sinopoli until further notice, carrying the flag for high school, junior and U SPORT pass-catchers from sea-to-sea.

With the first chart (Usage vs. Production) as context, I finished off by looking at the typically inverse relationship of target depth vs. Completion percentage for each of the twenty-two Canadian receivers analyzed. 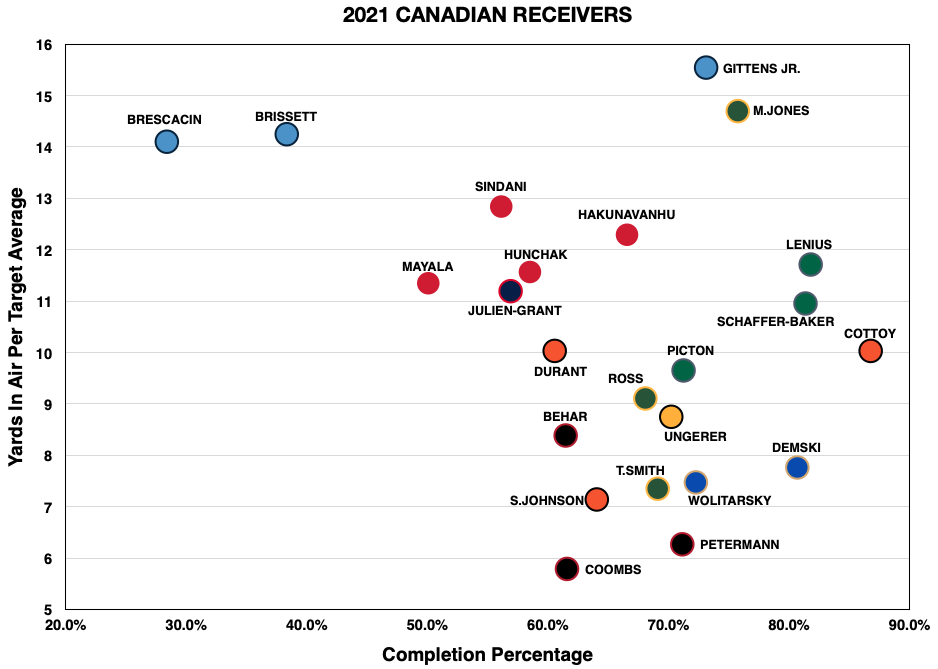 Wow, Kurleigh Gittens Jr. has been doing it in Canadian football since his time with the Cumberland Panthers through Laurier and now the CFL, but his ability to match Mike Jones nearly stride for stride here caught my eye as did the dynamic Riders duo of Brayden Lenius and Schaffer-Baker keeping it close with Cottoy, while Regina native Mitchell Picton lingers close behind.

All four Calgary Canadians show a similar style and usage, as do Ottawa, Toronto and Winnipeg while the only teams with one receiver eligible (not counting dual-threat dynamo RB Sean Thomas Erlington) are Hamilton with David Ungerer having a season similar to Edmonton’s Shai Ross and Montreal’s Kaion Julien-Grant dabbling into the four-pack of Stampeders.

To have this many Canadian receivers making a real impact on game day is incredibly exciting. Before a ball is kicked off each game, take a couple minutes to educate yourself on the little Canadian flags next to player names on the depth chart, and cheer like hell for them because they are some of the best players in this league. Home grown and proud to call the CFL theirs.

Oh, and once in a while they play quarterback to boot. 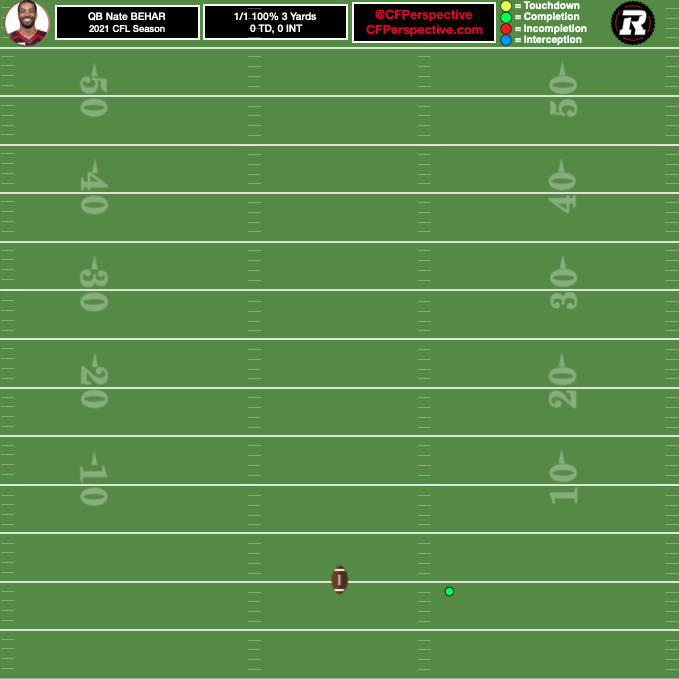