‘A lot more to come’: Argos’ Worthy seizes opportunity in win over Als 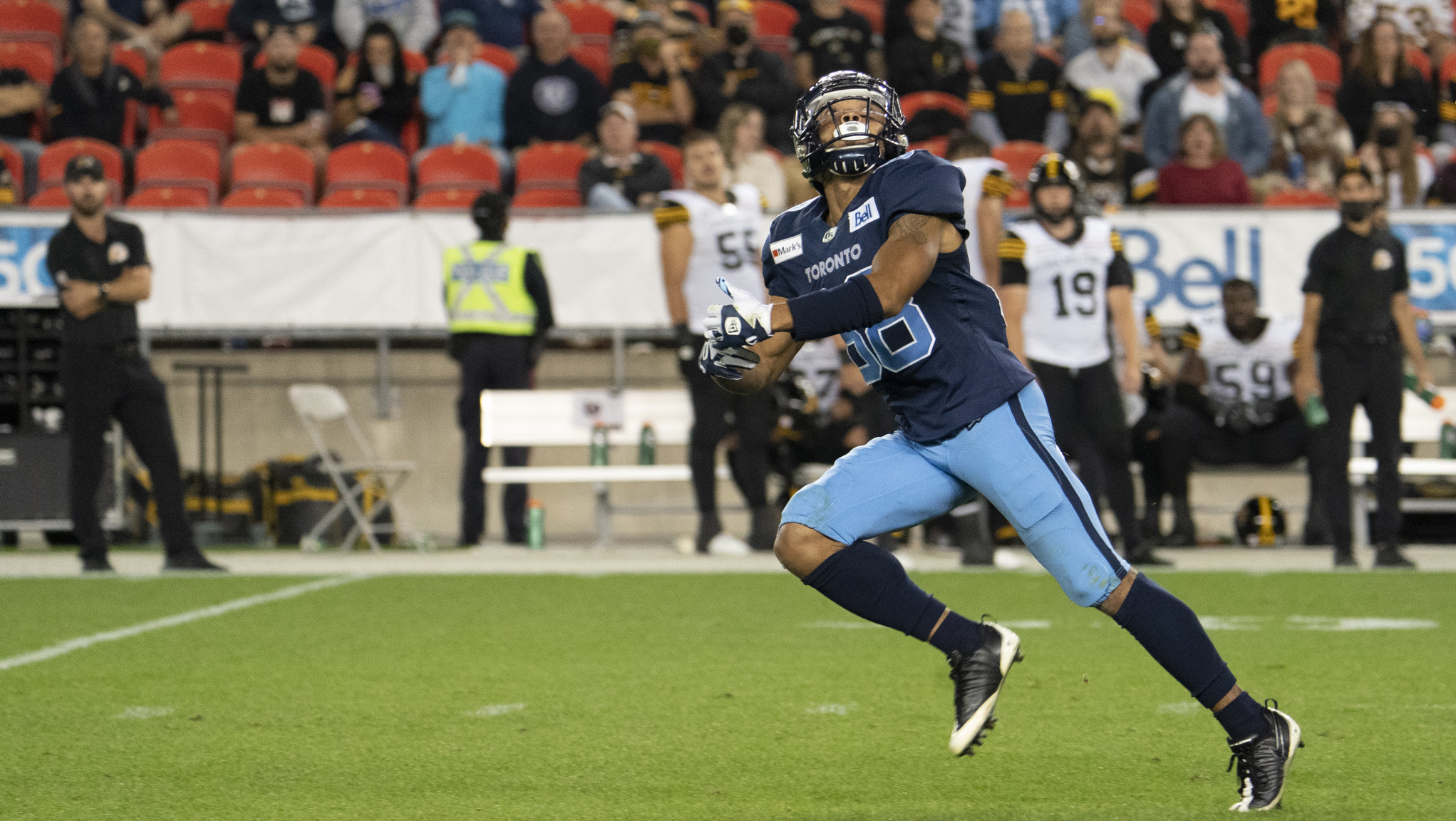 ‘A lot more to come’: Argos’ Worthy seizes opportunity in win over Als

TORONTO — The Toronto Argonauts came out on top in their first game against the Montreal Alouettes since 2019 with a 30-27 win on Friday night, and Chandler Worthy came through with his best performance since the two team’s last squared off.

The Argos’ receiver caught all four passes thrown his way for a season-high 85 yards, including a key 45-yard touchdown just before halftime. He also re-established a connection with quarterback McLeod Bethel-Thompson that started two years ago.

Bethel-Thompson filled in for injured starter Nick Arbuckle, but he ended up playing a major role in the win alongside Worthy.

“That’s my brother,” Worthy said about his quarterback after the game. “Even when I was released and I wasn’t here, we were in a park throwing together. The love extends beyond that field, so just to be able to go to war with him and score a touchdown for him meant a lot to me.”

RELATED
» Bethel-Thompson steps up to help lead Argos past Als
» Through the Lens: Alouettes at Argonauts
» Boxscore: Argos, Als by the numbers
» Watch: MBT Turns INT Into 7 With 45-Yard Strike To Worthy
» Hogan: Chris Jones, a true Boatman, rejoins Argos

The 28-year-old has bounced on and off Toronto’s practice roster since first joining the team in 2017, and he was temporarily released in August before re-signing earlier this month. Bethel-Thompson said he met up with Worthy during that time and saw his dedication first-hand.

Worthy had a breakout performance against the Als in 2019 when Bethel-Thompson was the full-time starter, racking up a career-best 93 yards and a touchdown on nine catches. Worthy said that experience and the subsequent time off, only made him hungrier for more.

Worthy finished the 2019 season with 129 receiving yards across three appearances.

“I was able to take a lot of things in in 2019 and apply it and I feel like with that time off my hunger grew more and more because I had to wait for that opportunity,” Worthy said.

“My hunger grew more than anything and I feel like that no man is going stop me and I’m not going to stop myself, so I just feel like it’s the beginning of a lot more to come.”

Worthy also went on to say that “nobody in the CFL” could beat him a 40-yard dash, noting that he has gotten faster since he last posted his personal-best time of 4.26. Bethel-Thompson echoed the sentiment by describing Worthy as the “fastest player in the CFL.”

Head coach Ryan Dinwiddie also liked what he saw out of Worthy, who now has 13 catches for 178 combined yards and two touchdowns in two starts against Montreal.

“Super excited for that kid. He’s been on and off the roster and he’s been at home and no one was giving him calls. We’ve just got to find a way to use him the proper way,” Dinwiddie said.

“Chandler did a hell of a job today, and I’m happy for that kid.”

Perhaps most impressive was Worthy’s ability to overcome adversity, as he bounced back from a first-half fumble on a kickoff return that halted Toronto’s momentum and allowed Montreal to score a field goal.

“I had to give back my teammates what I had lost them, so for myself it wasn’t even about me it was just about giving that back to my defence, giving that back to my offence because I put us in a bad situation. That’s all my mind was focused on, it was by any means I got to get in the end zone,” Worthy said.

When asked after the game if he would go head-to-head in a race against the league’s fastest players, including reigning Most Outstanding Player Brandon Banks, Worthy gave a quick and confident reply.

“If they have the money and they’re willing to put their pride on the line and I’m ready whenever they are,” Worthy said.