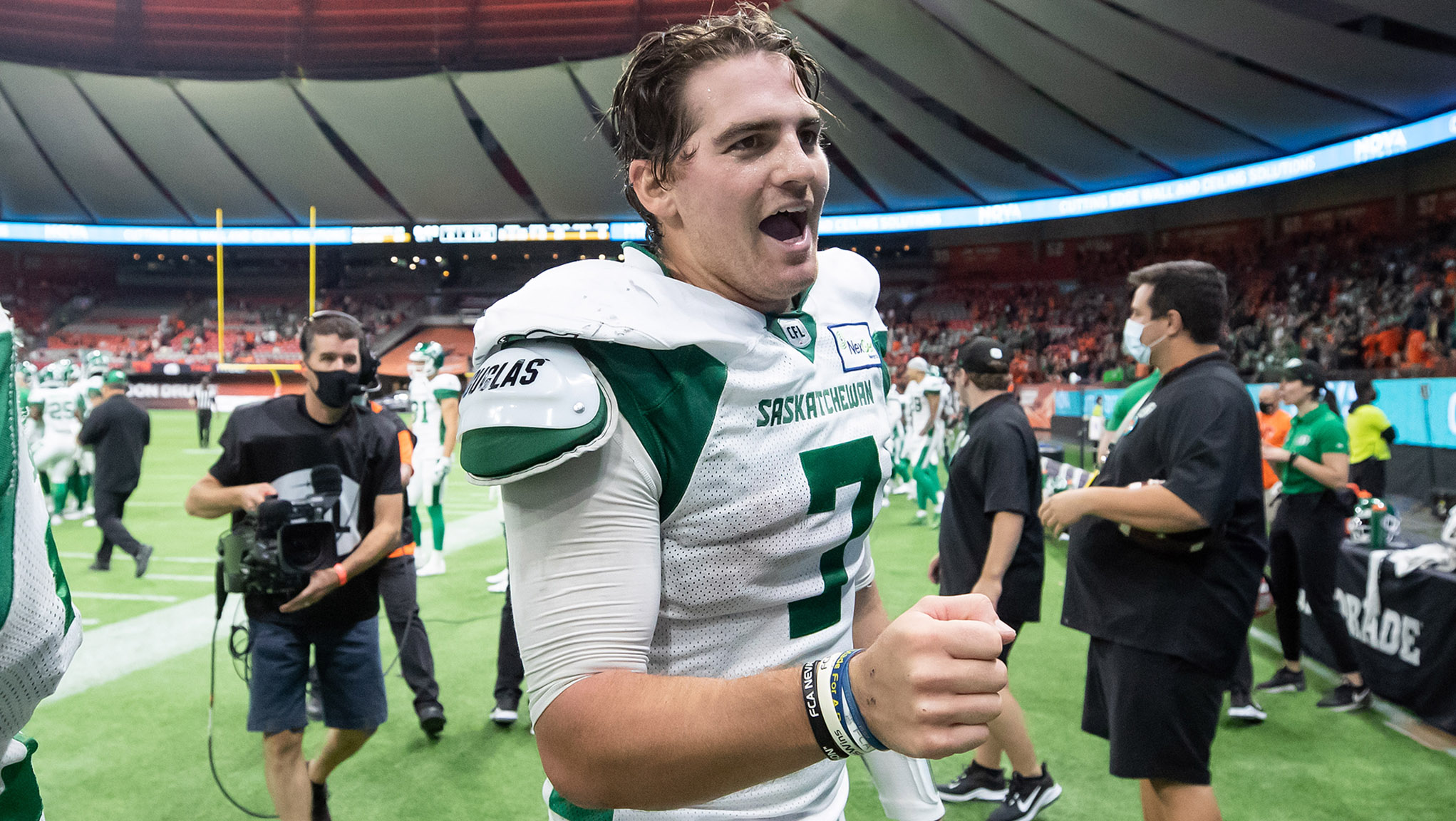 TORONTO — In the wake of a game of the year candidate, the Saskatchewan Roughriders emerged from the pile of bodies around the BC Lions’ goal line with a statement in hand.

Cody Fajardo and the Riders’ win over the Lions gave them the season series with their divisional opponents, put them clearly in second place in the West (for this week, at least) and gave them the confidence of being able to pull out a very difficult win on the road. These are all things that will bode them well as the season moves ahead.

Of course, there’s still a team at the front of the pack that they’ll have to be aware of for their next seven games. The Winnipeg Blue Bombers had a bye in Week 8, but their spot atop the power rankings wasn’t threatened. The Riders won’t have another crack at them in the regular-season, so they’ll have to continue to build momentum and hope to see them in late November or early December.

Those games still feel far off on the horizon right now and a lot will happen in the second half of the season. The Riders are doing their part, though, to make that race behind the Bombers interesting.

The Bombers get to follow in the footsteps of the Riders this week and will travel to BC Place to face Michael Reilly and the Lions. Winnipeg makes the trip coming off of a bye week and will be looking for its fifth win in a row. For as much love as the Bombers’ defence gets, the Lions have something pretty special themselves. This will be a good test for Zach Collaros and the offence.

There are very few quarterbacks in the CFL that seem to thrive on the pressure of a one-shot, don’t-screw-it-up drive with the game on the line. With his fourth quarter heroics on Friday, Fajardo showed he’s on that list. No one’s perfect in these situations — as a crossbar at Mosaic has shown more than once — but Fajardo is confident and fearless. It’s what you want from your leaders in those moments.

The Lions came out on the wrong end of a great game and saw their winning streak end at three. The team remains in a crucial stretch in its schedule, smack in the middle of a three-game homestand that they’d love to come out of at 2-1. That’d involve stopping the visiting Blue Bombers this week and handling Calgary the next week. Surviving Winnipeg’s defensive pressure and getting a win against the league’s top team would likely have the Lions at a similar swag/strut level as the Riders’ current one.

Despite the challenges presented to them, which include being down to their third-string QB amidst a sea of other injuries and their share of offensive struggles to this point in the season, the Ticats share the top record in the East with their rival Argos and hold the points for/against advantage in their season series to claim the top spot.

Maybe there isn’t a great debate to be had for coach Ryan Dinwiddie, but there’s plenty of reason for people outside of the Argos’ offices to wonder if McLeod Bethel-Thompson has earned another start when the team gets back on the field after its bye week. There’s an additional wrinkle in the game plan for the Argos. They return from their bye week and have a game on Wednesday, Oct. 6 against the REDBLACKS, then are back on the field on Thanksgiving Monday to face the Ticats for the third time this season. The team’s QB tandem is turning into a very interesting subplot to the story of their season.

There’s frustration and disappointment from the Als in their 2-4 record. That culminated in the team replacing Todd Howard with Greg Quick as the d-line coach on Sunday night. The Als need to cut back on turnovers (they’ve committed 10, third-worst in the league) and could use some help creating them defensively (they have nine, also third-worst in the league). Up against a very productive Hamilton defence this week, they’ll need to take care of the ball to have a chance at ending their two-game slide.

Did the bye week provide the opportunity for the Stamps that they needed to clear their heads, take a breath and try to turn their season around? They’ll need to be at their best for this crucial stretch of their season, which has them facing the Roughriders in three of their next four games. The other opponent in that span is the Lions. There’s little room for error here.

The good news for the Elks is that Trevor Harris is on his way back, even if he’s not suiting up against his former team on Tuesday night in Ottawa. Taylor Cornelius will get another game to show what he can do and he gets an opponent in the REDBLACKS that’s reeling, having dropped five straight. Watching David Watford find success in just his second-ever CFL start last week in the nation’s capital may have given the rookie pivot some assurances for this week.

The REDBLACKS will look to a pair of inexperienced quarterbacks for the time being, with both Dominque Davis and Matt Nichols moved to the six-game injured list after both were injured in last week’s loss to Hamilton. Head coach Paul LaPolice will start Caleb Evans but will also use fellow rookie Taryn Christion. The REDBLACKS enter into an important point of their season and will need strong play from the quarterback spot to start to turn their season around.