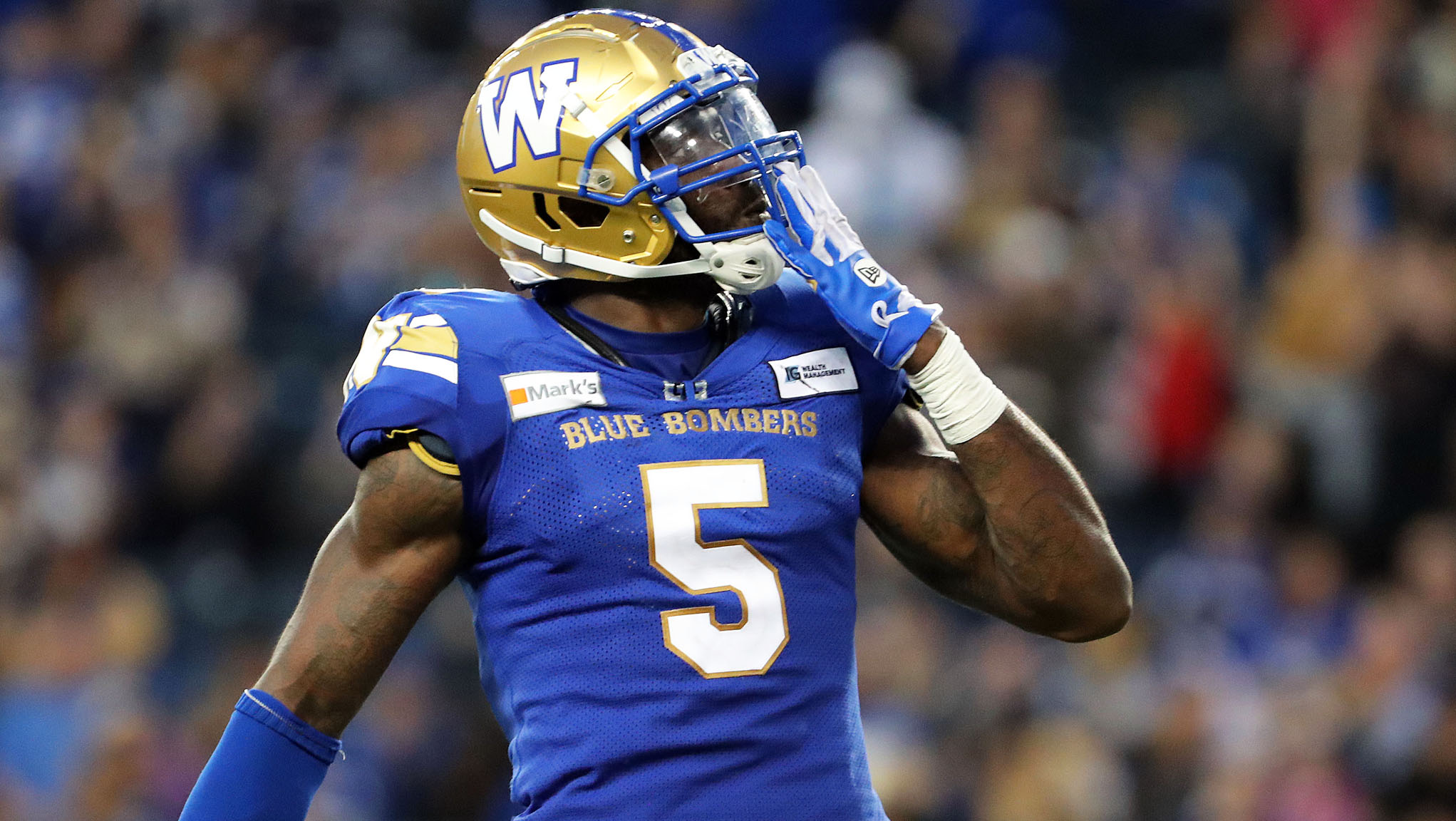 With Week 8 in the books, we are exactly halfway through the 2021 CFL season. That means it’s time for the mid-season award conversation to kick into high gear. I’ve got my choices for five of the league’s major individual awards with a few honourable mentions for good measure. Let’s see how close these are come the end of the season.

The Bombers are the CFL’s best team by a large margin and their quarterback is a huge reason why. Even with a full season away from game action, Collaros has picked up right where he left off down the stretch in 2019 and, quite honestly, probably looks even a little better.

Collaros has been dangerous, accurate, explosive, and dynamic in all seven of his starts this season. Collaros is completing more than 70% of his passes, sits second overall in both passing yards (1,731) and touchdowns (ten), and sports an impressive 105.3 efficiency rating. There were other candidates in the mix, but when you combine Collaros’ stellar play with Winnipeg’s dominance, I just couldn’t go in any other direction.

It’s funny…Jefferson doesn’t lead the league in any defensive category, but that doesn’t diminish his impact in the slightest. After winning this award in 2019, Jefferson might be even more terrifying in his second season with the Bombers. At the age of 30, I’m not sure there’s a better athlete anywhere in this league, on either side of the ball.

Jefferson’s stat line through seven games is very much on brand: five sacks, three forced fumbles, one fumble recovery, and one interception. The thing is, no defensive player impacts the game in as many ways as Jefferson does. He’s a game breaking factor on every down, in every situation, and against every team. Somehow Jefferson keeps on getting better.

I’m sure if CFL writers were casting ballots for mid-season awards, Lokombo would get plenty of love as Most Outstanding Defensive Player. While I have Jefferson for that award, Lokombo is my choice for the league’s top Canadian, juuuuuust edging out his teammate Jordan Williams. After spending 2019 in Montreal, Lokombo returned to BC this year, rejoining the team where he played his first four seasons. The results so far have been outstanding.

It’s hard not to take notice of what the Lower Mainland product has accomplished so far. Born in the Democratic Republic of the Congo, Lokombo moved to Canada as a child and grew up in Abbotsford where he starred at W.J. Mouat Secondary. Now back in BC, take a look at Lokombo’s results in 2021: 40 defensive tackles, two sacks, one forced fumble, one recovery, a league-leading three interceptions, and one defensive touchdown. The Lions sit 4-3 thanks in large part to their defensive group, and Lokombo has been a driving force.

Despite a 2-4 record, there have been encouraging signs in Montreal this season. One of them has been their offensive line, which is being anchored for a third consecutive year by left tackle Washington. With stiff competition, I’m leaning slightly towards one of the steadiest, most consistent linemen in the league over the last decade.

Through six games, the Alouettes have surrendered just seven sacks, which ties them with Calgary for the lowest total in the league. Furthermore, Montreal is the league’s leading rushing team by a significant margin, averaging more than 154 yards on the ground per game. William Stanback sits first overall with 618 rushing yards, while quarterback Vernon Adams leads the league with 11 passing touchdowns. The Als have been competitive in every game they’ve played and, led by Washington, their offensive line is a huge reason why.

It’s just another year of pounding field goals without seemingly breaking a sweat for one of the greatest kickers in CFL history. If Paredes continues on the pace he’s at this season, he’ll be in good shape to bring home his second career John Agro Special Teams Award, and first since 2013. The three-time league All-Star has been in fine form this year.

With 21 made field goals on 23 attempts, Paredes is drilling kicks at a league-best 91.3% rate. To make that figure more impressive, eight of those successful attempts have been from 40 yards or longer, also number one overall. Most crucially, Paredes has been vital for his team as Calgary’s offence continues to find their way. He leads the CFL with those 21 field goals and has hit all nine of his extra point tries.

We certainly didn’t overhype the Week 8 finale between the Lions and Riders, did we? Michael Reilly and Cody Fajardo went toe-to-toe all night with the latter getting the last laugh. Fajardo proved once again what a gamer he is on Saskatchewan’s final drive to win the football game. He went four-for-four and set up his own quarterback sneak for the win in what was a huge performance from Saskatchewan.

Not only did they take over sole possession of second place in the West Division, the Riders also swept their season series with BC, which could end up huge for tiebreaking purposes. It’s too bad these two don’t play again this season, so I guess now we hope for a playoff matchup in a few months.

I know he hasn’t played every game for the Argos, but has anyone looked at the season McLeod Bethel-Thompson is having? With two more touchdown passes in Friday’s 30-27 win over Montreal, MBT has thrown five this season against no interceptions. He’s probably earned the start in Toronto’s next game, which comes against Hamilton after a bye this week.

Speaking of the Tiger-Cats, how about David Watford’s 2-0 debut as a CFL starting quarterback. Hamilton has done a nice job of keeping the game plan simple and effective for Watford. In saying that, the third year CFLer has limited mistakes and is using his athletic ability to make things happen on the ground. He goes for win number three Saturday at home to the Alouettes.

Finally, that’s no typo…Week 9 (this week) starts tomorrow. It’s a game between two teams in desperate need of a win as 2-4 Edmonton visits 1-5 Ottawa. Interestingly, it’s a rematch of Week 1 when the REDBLACKS stunned the Elks at Commonwealth.