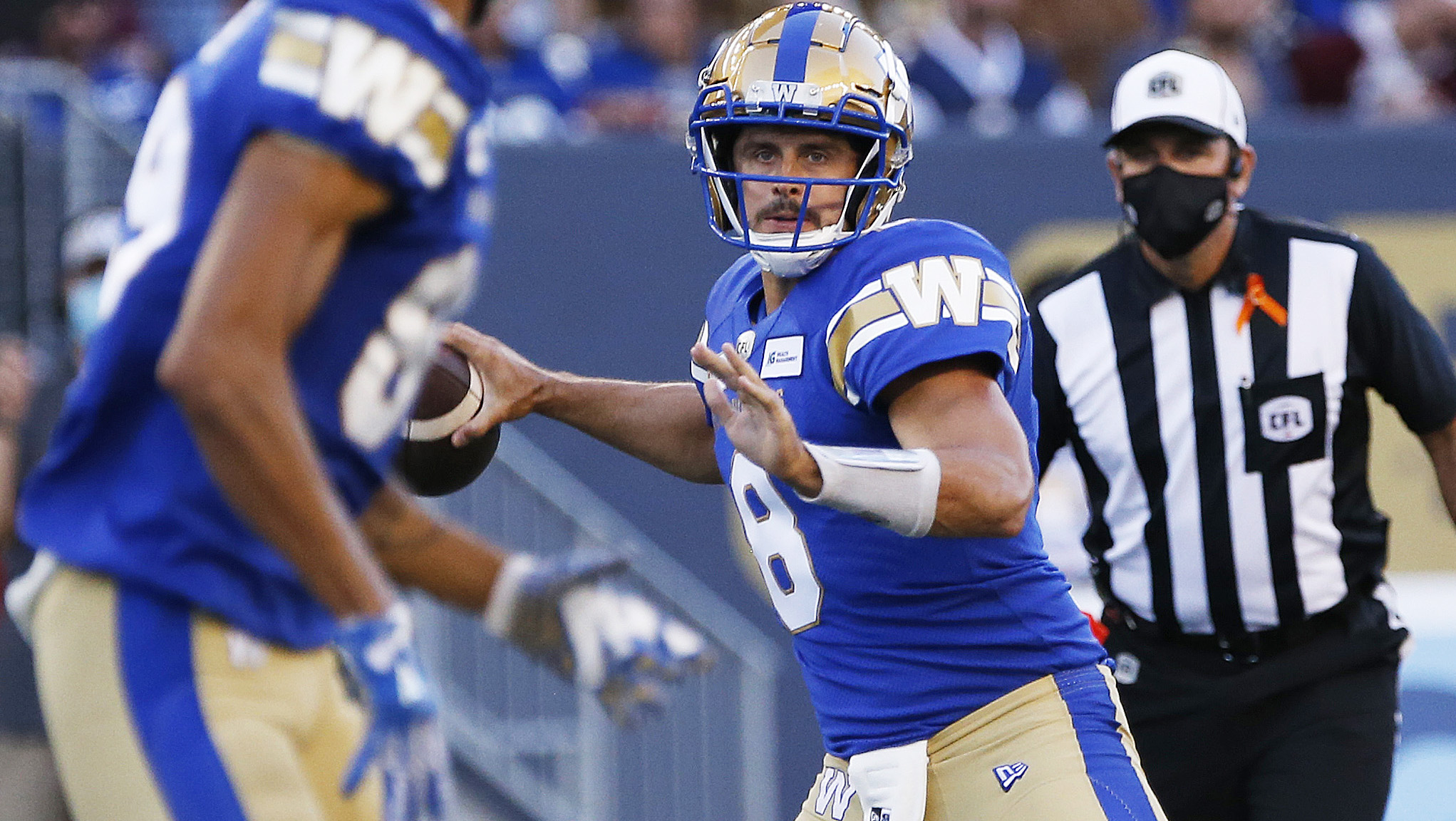 TORONTO — We couldn’t have been the only ones thinking it as he settled in at quarterback to close out the game last week.

There was Nate Behar, glass broken around him and freshly inserted as emergency QB, in a game where the Ottawa REDBLACKS trailed by two scores. Standing on the field at TD Place, his team in need of some miraculous work, all eyes fell on the receiver turned pivot and wondered if he could maybe do something here again.

On the same field in 2014, Behar was a receiver for the Carleton Ravens and made a miraculous catch to give his team its first Panda Bowl win over the Ottawa Gee Gees since the Ravens’ program had been revived in 2013.

Unfortunately there were no Ottawa miracles last week. The injuries that led to Behar’s brief stint at QB landed the REDBLACKS’ experienced players, Dominique Davis and Matt Nichols, on the six-game injured list. Behar won’t get the start at QB this week. Rookie Caleb Evans will, with Ottawa head coach Paul LaPolice saying that he’d also look at rookie QB Taryn Christion as well when their team hosts the Edmonton Elks on Tuesday night. That game will be an all-rookie affair, as Taylor Cornelius gets his second start for Edmonton while the team waits for the recently re-activated Trevor Harris to get back on the roster.

On the other end of the experience scale, we’ll see two of the league’s best face off on Friday in BC, when Michael Reilly and the Lions host Zach Collaros and the Winnipeg Blue Bombers. There’s been some jostling amongst the top-three in our index this week, with a surprising outcome, given that the Lions lost a dramatic game last week at home.

While Behar didn’t make his way into these rankings, we thought his moment in a rare situation was worth a shoutout. 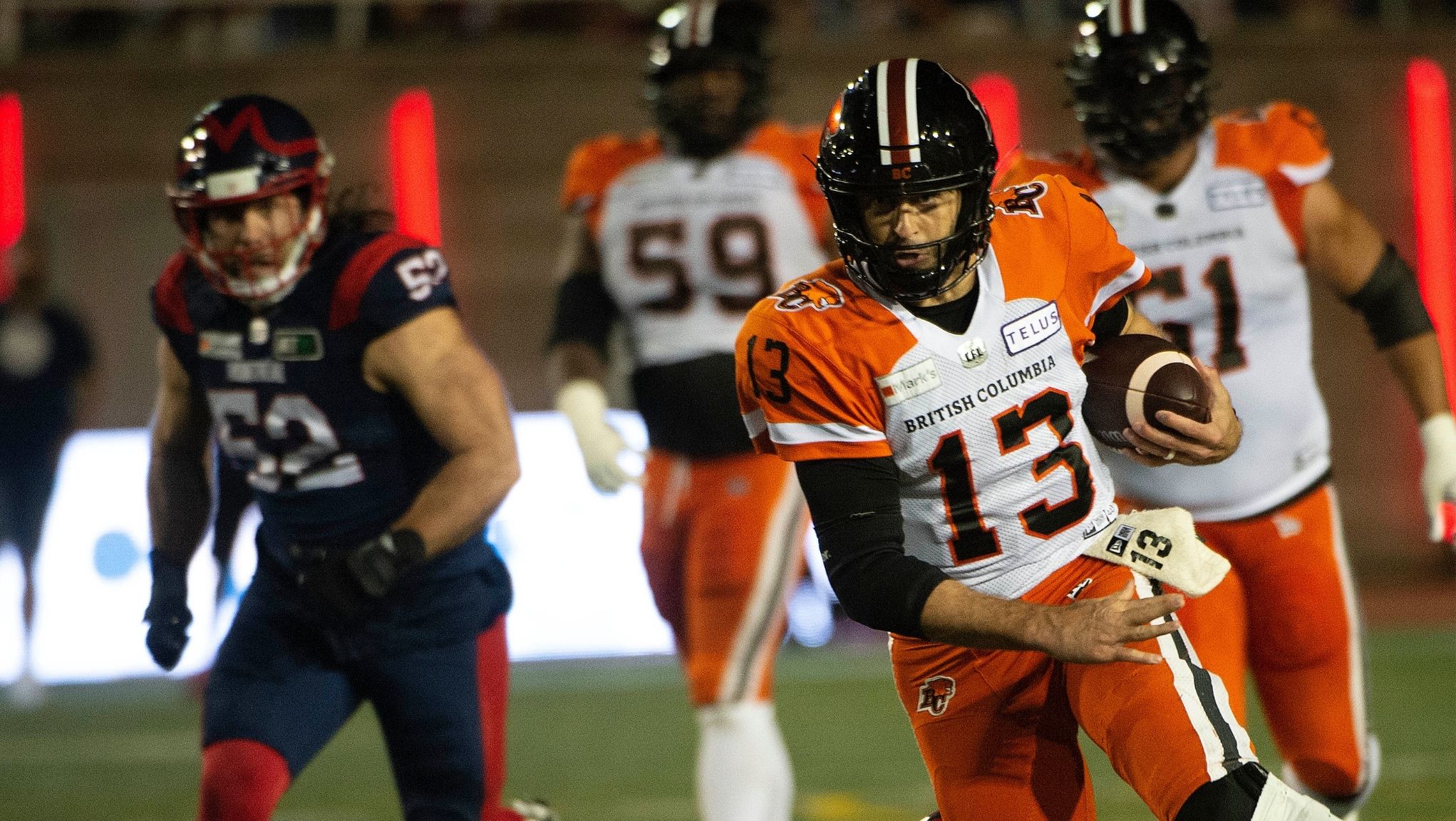 Michael Reilly goes into Week 9 with a TD to INT ratio of 10:1. That’ll be tested this week against Winnipeg’s relentless defence (Peter McCabe/CFL.ca)

Reilly’s numbers were a little lower than Cody Fajardo‘s in their meeting last week, which is a strong game of the year candidate, but the votes fell in Reilly’s favour. One factor in Reilly moving up could be how well he’s taken care of the ball. He’s thrown 10 touchdowns to one interception now and leads the league in passing yards, with 1,860. His efficiency rating (117.8) is highest among qualifying QBs as well.

Collaros and the Bombers roll into Vancouver on a four-game win streak and are coming off of a bye week. Collaros is right behind Reilly in passing yards (1,731, second in the league) and as we’ve said all season, has done exceedingly well at giving his team what it needs to win games. Collaros should get a good challenge this week from a Lions’ defence that seems to be improving by the week.

This spot may irritate some Riders fans, but experience/historical value are legitimate factors in the voting process and Fajardo, while making a case for himself as MOP this year, is currently behind Grey Cup champions and in Reilly’s case, a previous MOP-winner. Fajardo’s performance in BC was gutsy and it moved the Riders ahead of the Lions in the standings while giving them the season series. That’s a good step toward a home playoff game, which is something (we hope) Rider fans will care about more than their star player sitting in third this week.

This is a big week for Mitchell and the Stamps, who host the Riders on Saturday. The bye week should give Mitchell and coach Dave Dickenson the edge in prep, which they’ll need against brother Craig Dickenson, Fajardo and a Riders team that should be very confident in its ability to win games right now. Having Kamar Jorden in the lineup feels like a must at this point, as Mitchell could use some familiar targets that he’s had success with in the past.

Adams and the Als are feeling the frustration of another loss, as they watched an opportunity to move up in the East standings slip through their fingers last week in Toronto. True to his moniker, Adams is making big plays, but he’s also struggling with turnovers, throwing another two interceptions against Toronto. It gets no easier this week, as they travel into Hamilton to face a Ticats’ defence that demands QB accuracy and wise decisions.

We don’t know if it’s a QB controversy as much as it’s a strong QB tandem, but we’re at the midpoint of the season and the talk about McLeod Bethel-Thompson and Nick Arbuckle hasn’t died down. Arbuckle’s injury opened the door for Bethel-Thompson and he was very solid against the Alouettes, throwing a pair of touchdowns and taking good care of the ball all night. The Argos have games against Ottawa on Oct. 6, then Hamilton on Oct. 11. Does Ryan Dinwiddie let McBeth roll on as starter for the first game before making a decision for the second, or will he preserve Arbuckle for the showdown with the Ticats?

After getting in for the dying moments of a soon-to-be loss against the Ticats two weeks back, Maier simply went 9-9 (perhaps against a less intense Hamilton defence), moved the ball and found the end zone. Maier played well in Mitchell’s absence earlier this season. If he’s put into the game against the Riders, we know he won’t feel overmatched. Dave Dickenson’s use of his backup this week could be interesting.

Watford threw his first touchdown last week, in a rainy win against the REDBLACKS, but his numbers — 15-25 passing for 115 yards, with the TD and zero INTs — weren’t eye-popping for the second week in a row. He got out of the pocket and ran a little more, with 11 carries for 54 yards. Will we see things expand for him if he gets the start on Saturday against the Als?

Cornelius gets his second start on Tuesday night against the Ottawa team that stunned the Elks in Week 1. A lot has changed for both teams in that stretch. Cornelius had three interceptions against the Bombers in his debut, which is a very difficult task for any QB on any given week. We should get more of a feel for what he can do against the REDBLACKS.

It wasn’t going well for Davis before he threw the pick-six against Hamilton last week. That he tweaked his hamstring on the play only made things worse and in a way, could have shifted the focus of the REDBLACKS’ season. Davis will sit on the six-game injured list while the team’s rookie QBs take their shots at providing the offence with some consistent punch.