Stamps hold on to down Roughriders 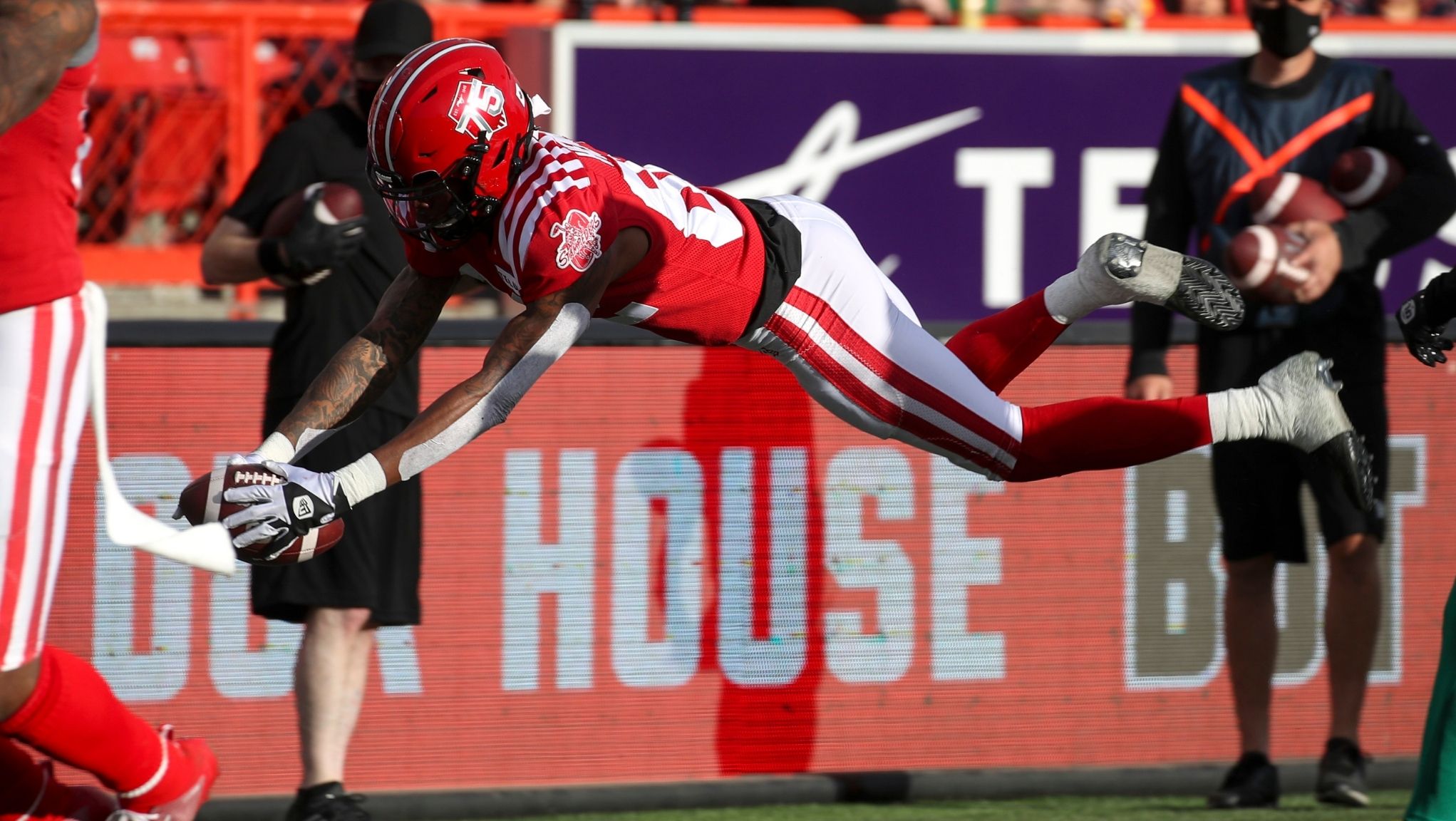 Stamps hold on to down Roughriders

CALGARY —  Bo Levi Mitchell threw for 184 yards and a pair of touchdowns in the Calgary Stampeders’  23-17 win over the Saskatchewan Roughriders.

Mitchell came out of the gate firing as the Stamps’ gunslinger played a monumental role in his team’s ability to build an early lead.

Mitchell was not alone in his efforts as he got a little help from a pair of rookies in Shawn Bane and Malik Henry, who both found the end zone on Saturday. The two were workhorses of the Stamps’ offence and combined to record 82 yards receiving and seven yards on the ground.

Cody Fajardo fended off a hungry Stampeders’ defensive line pressure for the majority of the game but still managed to record 269 passing yards.

William Powell recorded the Riders’ lone touchdown on the day on 66 rushing yards.

RELATED
» Bane rises to the occasion and shines in his debut
» Through the Lens: Saskatchewan at Calgary
» Boxscore: Roughriders, Stampeders by the numbers
» Watch: Schaffer “Playmaker” -Baker sets up a TD with a 71-yard snag

The Stamps opened the game’s scoring as Mitchell found newcomer Bane for a 32-yard gain on second and short, with Henry’s number called on a jet sweep. Collecting the handoff from Mitchell, Henry wrapped around the right side of the Stamps’ offensive line, diving over the pylon for his first CFL touchdown.

The firsts would continue for the Stamps as Bane’s big debut in Cowtown moved along. Following a Riders’ third-down attempt that came up short, Mitchell would connect with the rookie in the end zone for his first CFL touchdown, which put the Stamps up by a pair of TDs in the first quarter.

After having little to no success in the first quarter, the Riders were able to move the ball against the Stamps’ defence in the second. While their drive would come to an end at the Stamps 23-yard line, Brett Lauther would sail a field goal through the uprights to get the Riders on the board.

Mitchell would not be able to connect on two potential touchdown passes in Rider territory, prompting a Rene Paredes field goal.

Calgary’s stifling defence would prevent the Riders from getting anything more than a field goal when the field got condensed during a drive that looked promising, starting from their own 35-yard line.

Both teams would get a final possession in the closing minutes of the second quarter with Calgary opting to take a knee on theirs and bringing their 17-6 lead to the locker room.

On a rare field goal miss by Paredes, the Riders were only be able to bring the ball out to their own five-yard line. Following a rush attempt by Powell that resulted in no yards gained, Fajardo’s near pick on second down would mark their sixth two-and-out on the day. Henry would field the ensuing Riders’ punt, bringing it all the way to the Riders 27.

Paredes would not miss on his redemption kick from 40 yards out to improve the Stamps lead to 20-6.

The night’s first turnover would not be until late in the third quarter as Ed Gainey collected a tipped ball by Mitchell’s intended receiver to provide a spark to the Riders’ sideline.

Momentum would turn in the Riders’ favour. Following a 71-yard reception by Kian Shaffer-Baker, Powell would muscle his way through the Stamps goal-line package to make it a 20-14 game.

With 3:33 left to go, Jake Maier would take the field with an apparent injury sidelining Mitchell. In shotgun formation, Maier’s first touch was a handoff to Ka’Deem Carey, who would break off a 29-yard run.

Maier and the Stamps’ offence worked their way into Riders’ territory, setting up Paredes’ field goal that made it 23-14.

On their following possession, Fajardo and the Riders took to the air. Getting the ball in the hands of Kyran Moore, Schaffer-Baker and Ricardo Louis got them down to the Stamps’ 20 for Lauther.

The Riders’ special teams would come up huge seconds later as they would recover an onside kick, but an illegal interference call would require a re-kick to which Lauther shrewdly collected his own kick, giving Saskatchewan a chance at an unlikely win.

The Riders would convert multiple first downs, working their way through the Calgary defence to Stamps’ side of the field. On a make-or-break third down, Fajardo went for it all and was picked off short of the endzone by Jonathan Moxey to seal the Stamps’ win.

These two teams will in a week’s time for their second of three games at Mosaic Stadium at 7:00 p.m. ET.