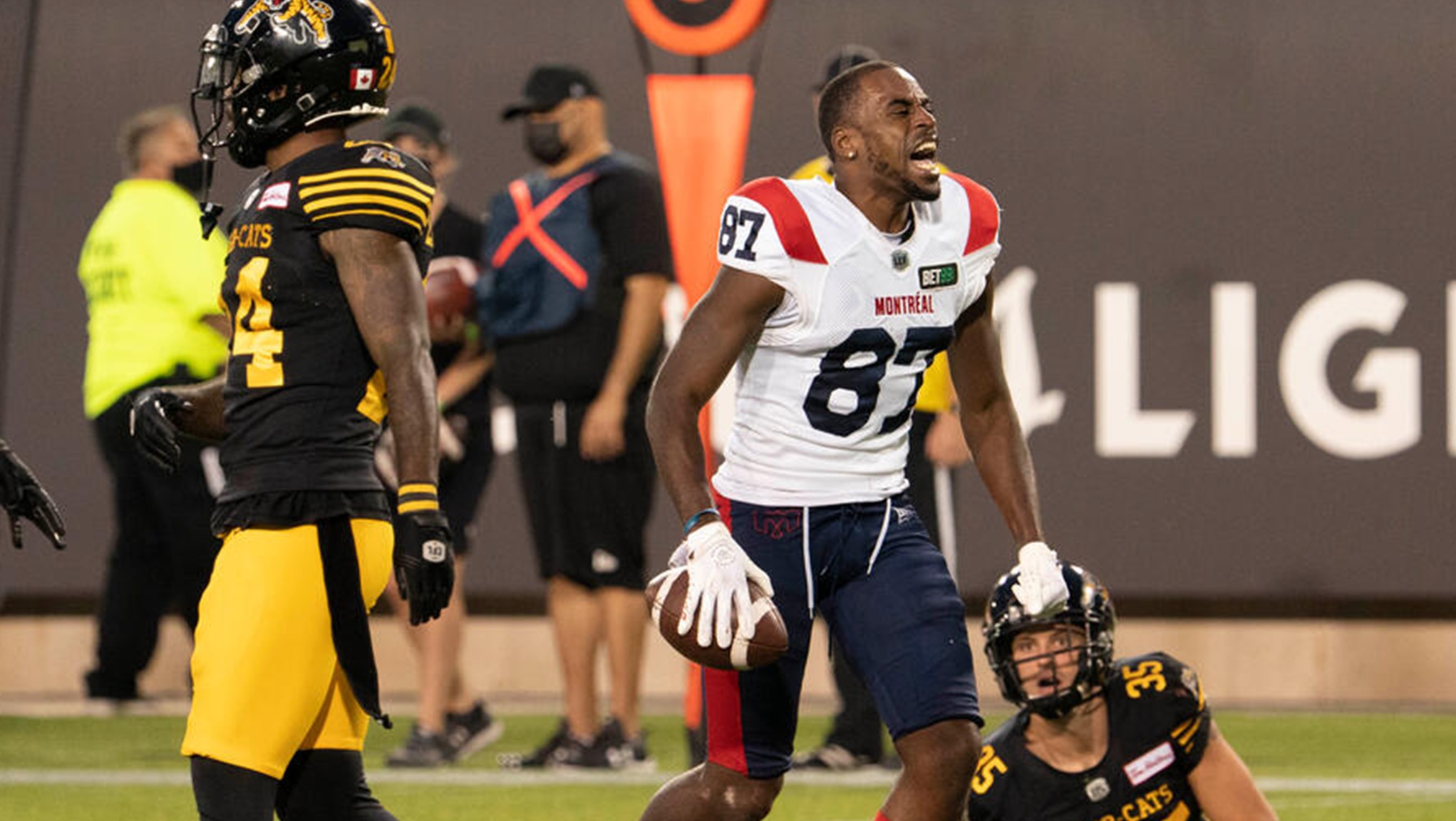 If there was any indication that Week 9 was going to be electric, the debut of Ottawa REDBLACKS’ rookie QB, Caleb Evans‘ performance was certainly it.

And it wouldn’t be a REDBLACKS game without a DeVonte Dedmon return TD, would it!?

Indeed, the Winnipeg Blue Bombers are the class of the CFL in 2021. The Bombers put on another multi-phased clinic, trouncing the BC Lions 30-9, to move to 7-1 on the season: Incredible stuff.

With that said, it certainly doesn’t hurt when Kenny Lawler looks like a man amongst boys, high-pointing the ball for a beauty!

Lawler EXPLODED for over 200 yards receiving in Week 9, and played a huge role in the Bombers’ offensive onslaught vs. the BC Lions!

SATURDAYS ARE FOR THE DRAMATICS

Possibly the greatest night in the CFL in 2021 thus far, with a doubleheader that gave us way more than we could have ever imagined.

Allow us to summarize:

Saturday marked the return of QB, Jeremiah Masoli and receiver Brandon Banks to the lineup, as well as Bralon Addison making his season debut in the Black and Gold:

Clockin' for the first time in a long time: @BralonAddison2.#CFLGameday | @Ticats pic.twitter.com/7lk4hjSqlO

The chaos began early in this one, off a botched punt return attempt from the Montreal Alouettes:

WILD start to this one!

The Ticats would jump ahead off a Sean Thomas-Erlington TD scamper—do you think he meant to do this?

Bit of a bobble, but Thomas Erlington with the touchdown!#CFLGameDay | @Ticats pic.twitter.com/TNk4aF0Qzc

Amidst all the action of Satuday night, however, Ticats linebacker Simoni Lawrence moved into 20th all-time for defensive tackles in the CFL!

With the Alouettes down 14 points in to the fourth quarter: It is here we find ourselves on the precipice of CFL madness.

This Wieneke TD makes it a seven-point game:

This Cote FG brings it to a four-point differential…

And the pièce de résistance: Eugene Lewis is now THE MAN.

Rod Smith, take it away from the broadcast booth:

And it looked like the Alouettes were heading to a regulation win until….

This one would ultimately go to OT where an early FG try decided this one for the Alouettes.

To wrap-up Week 9, it was the first of three consecutive meetings between the Calgary Stampeders and the Saskatchewan Roughriders. This game did not dissappoint!

Each week across the league, a new CFL rookie emerges, and Calgary has their own in Shawn Bane Jr.

Speaking of rookies: “Kid Canada”, “Shaff and Bake”, Kian Shaffer-Baker added to his highlight reel once again with this huge grab!

And while this game may have started slow….it’s the final 3:00 you have to pay attention to.

With the Riders down six points late, they had THREE onside kick attempts with the third sticking, thanks to this heads-up play from Brett Lauther (shades of Pat McAfee anyone?)

Happy Birthday to the great @PatMcAfeeShow 👏🏻

A throwback to McAfee recovering his own onside kick 💥 pic.twitter.com/x19AWGl1JD

While the Riders recovered the onside kick successfully, the final drive came up a bit short with a clutch interception from Jonathan Moxey, sealing the win for the Calgary Stampeders!

But guess what? We’re right back at it again on your screens Wednesday night.

The Toronto Argonauts announced they are celebrating their 1991 Grey Cup championship team, giving out 90s-inspired swag from BMO Field, and returning to their iconic “A” logo for the game:

Celebrating the '91 champs + a giveaway 🏆

Off to Thanksgiving weekend we go!