TORONTO — The Toronto Argonauts organization will host a 1991 championship celebration to honour the 30-year anniversary of one of the most memorable teams in CFL history when they play host to the Ottawa REDBLACKS on Wednesday night at BMO Field.

The 1991 Toronto Argonauts were quite literally a Hollywood story; owned by a trio that included Canadian icons John Candy and Wayne Gretzky, as well as American businessman and then owner of the Los Angeles Kings Bruce McNall. With seven eventual Canadian Football Hall-of-Famers on the roster including the likes of “Pinball” Clemons, Matt Dunigan, D.K. Smith and Don Wilson, as well the 1991 Coach of the Year Adam Rita and signing one of the biggest American college football stars ever in Raghib “Rocket” Ismail, the Boatmen were every bit Hollywood on the field as well.

RELATED
» Long Read: Chasing CFL folklore in the form of a beer can
» Landry: How the Argos acquired the Rocket
» Grey Cup On Demand: Watch the Rocket’s return TD in the ’91 Grey Cup
» Landry: Year of the Rocket brings us back to 1991

The Double Blue finished 1991 with the best record in the CFL going 13-5 with eight CFL All-Stars nods before blowing out the Winnipeg Blue Bombers 42-3 in the Eastern Final in front of more than 50,000 fans at the SkyDome. A 36-21 victory over Calgary in the Grey Cup capped off one of the most exciting seasons in Argonauts history, with newcomer “Rocket” Ismail taking home game MVP.

Wednesday night will be a celebration of that iconic team. 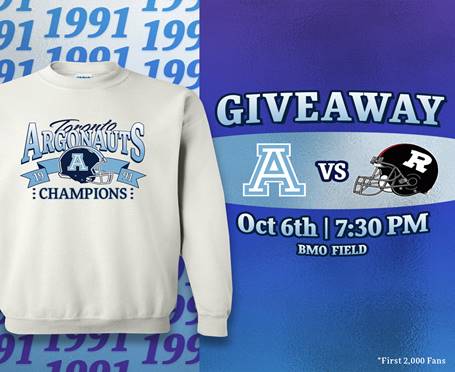