Argos’ total team effort the key in their win over Ticats 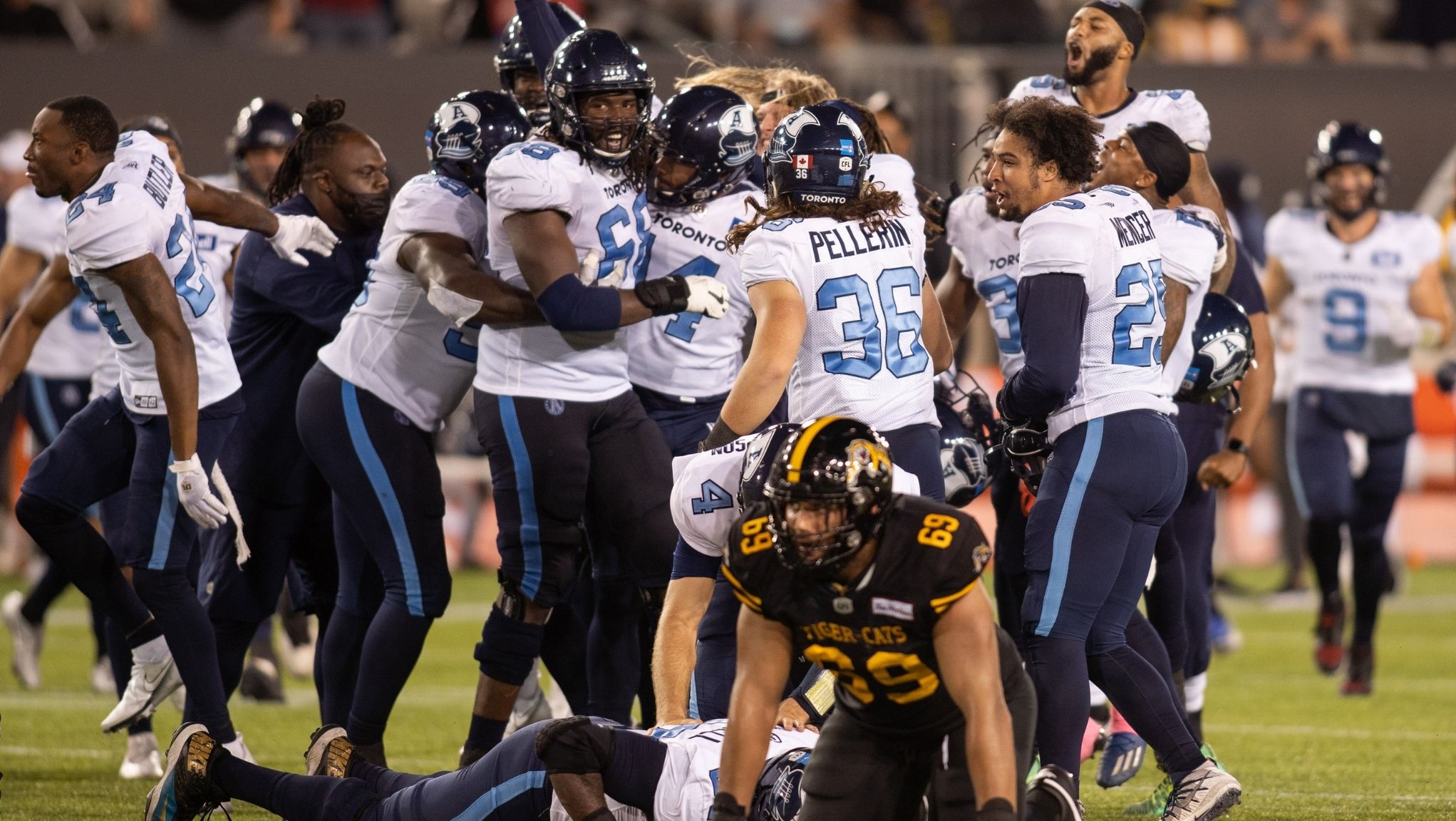 Argos’ total team effort the key in their win over Ticats

HAMILTON —  After clawing back from a 12-5 first-half deficit, a complete team effort helped the Argos knock off the Hamilton Tiger-Cats 24-23.

Having just played five days ago in a game that saw all three phases be the difference-maker in the Argo’s win over the Ottawa REDBLACKS, all areas were leaned on again.

On offence, Mcleod Bethel-Thompson shared the ball around as he threw for 388 yards and a pair of touchdowns. Defensively, the Argos came up with two sacks and on special teams, Boris Bede sailed through the game-winning field goal.

RELATED
» Last-second field goal lifts Argos over Ticats
» Through the Lens: Toronto at Hamilton
» Boxscore: Argos, Ticats by the numbers
» Watch: Sean Thomas-Erlington finds space and takes it to the house

While he had the opportunity to praise individual position groups during his post-game press conference, Ryan Dinwiddie credited the team’s perseverance that led to their win

“I told these guys: ‘If we want to be number one in the East at the end of the year, this is one we have to get,'” said Dinwiddie. “Those guys dug deep and found it in them to get it done so I’m just proud of them.”

Dinwiddie also went on to talk about the amount of character he saw from his team in the later moments of the game as they surged back to score 19 second-half points.

“Coming off five days, I knew it was going to be tough,” said Dinwiddie to the media. “I’m sure everybody wrote us off and didn’t have us coming in like we did, but great character win. (The) offence wasn’t what we needed to do early on, defence kept us in it, special teams kept us in it. Those guys played team football today, they played for each other.”

With his team now in possession of a two-game lead on Hamilton in the East Division standings, Dinwiddie commented on the significance of exactly that.

“It’s huge,” said Dinwiddie. “I knew this game was one we had to win to kind of get where we need to go. We got a lot of work to do; we’ve got to go to Montreal and they’re playing really good football as well. The East isn’t what the East used to be. We’ve got our hands full, it’s going to be a tough schedule, but this game is going to help us out.”

While the game looked to be one-sided in the first half, Bethel-Thompson never felt it was out of reach.

“With our defence, absolutely not,” said Bethel-Thompson post-game. “I never felt we were out of it, we just had to do our job.”

As for the offensive explosion in the second half that sparked the comeback, the reasoning was simple for the Argos’ signal caller.

Of the momentum-swinging plays that occurred in that second half, it was was the touchdown pass to Da’Varis Daniels that really allowed Toronto to come back.

“I just wanted to make up for everything that happened in the first half plus be a spark and just try and be a playmaker in the right moments,” said Daniels about the catch post-game.

As for the man of the hour, Bede couldn’t help but smile when asked about the game-winner which carried some extra personal significance as his long snapper Jake Reinhart was injured last week.

“It was a very very exciting moment,” said Bede to the media. “It was weird-it might sounds crazy, but as soon as I stepped in that stadium I was like, ‘I think we’re going to get a game-winner today,’ and it just ended up happening. It was just a great feeling.”

The Argonauts will not play until Week 12 when they travel to Montreal to take on the Alouettes on Friday Night Football at 7:30 p.m. ET.